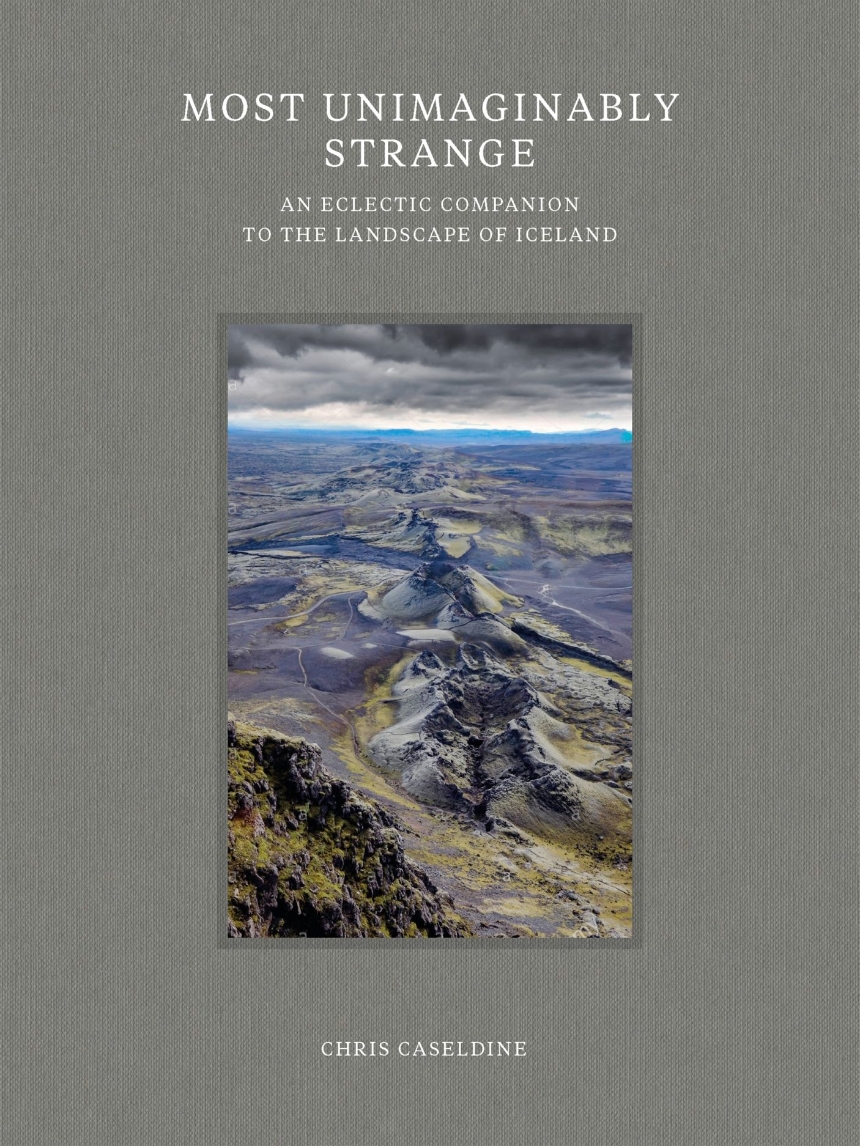 An Eclectic Companion to the Landscape of Iceland

An Eclectic Companion to the Landscape of Iceland

For all who yearn to travel to the home of the sagas, a beautifully illustrated companion to the terrain of Iceland—from puffins to ponies, glaciers and volcanoes to legendary trolls.

Described by William Morris as “most unimaginably strange,” the landscape of Iceland has fascinated and inspired travelers, scientists, artists, and writers throughout history. This book provides a contemporary understanding of the landscape as a whole, not only its iconic glaciers and volcanoes, but also its deserts, canyons, plants, and animals. The book examines historic and modern scientific studies of the landscape and animals, as well as accounts of early visitors to the land. These were captivating people, some eccentric but most drawn to Iceland by an enthrallment with all things northern, a desire to experience the land of the sagas, or plain scientific and touristic curiosity. Featuring many spectacular illustrations, this is a fine exploration of a most singular landscape.

"A most impressive work. Travelers to Iceland in the nineteenth century did not see the land as it was, but more as they expected it to be: an exotic landscape. Caseldine takes a different approach, traveling through the history and topography of Iceland with great understanding and knowledge of his subject. It is highly recommended to anyone who loves to explore the unknown."

"Anyone whose dreams are haunted by Iceland’s mountains and mossy lava plains will find lots to learn and to enjoy in this colorful book and the striking tales it tells. Put on your coziest wool sweater and learn how Iceland’s landscapes inspired great debates in earth science and shaped the fates of Icelanders and countless awestruck visitors through the centuries."

On Saturday 22 July 1871 the artist and writer William Morris, described by one editor of his work as an eager and polite guest in Iceland, was travelling on horseback across Markarfljót towards Þórsmörk and found himself confronted by a landscape he described as ‘most unimaginably strange’. Although yet to see Geysir and Þingvellir, Morris had already ridden from Reykjavík across southern Iceland but was taken aback by finding himself in a landscape so diverse, chaotic and intimidating that he went to great lengths in his diary to try to give an impression of something which his readers would clearly have been unable to grasp, coming as they did from very different landscapes in Britain and Europe. His first sight of eastern and southern Iceland sailing from the Faroes challenged his literary abilities: ‘it is no use trying to describe it, but it was quite up to my utmost expectations as to strangeness.’ This combination of novelty, awe, apparent chaos, fear, curiosity and uncertainty lies at the heart of the fascination the Icelandic landscape has exerted on travellers, scientists, artists and writers over the centuries.

Coming to terms with the Icelandic landscape, and especially trying to understand why it looks like it does, its geological origins and present form, may require a good understanding of the broad range of earth sciences, but also demands an ability to use language and observations beyond the strictly scientific. In a commentary on his approach to translating the recently published Öræfi, by Ófeigur Sigurðsson, Lytton Smith observes that ‘we see the humans who confront its geology, topography and geography attempting to find the language that would contain its wonder, tumult and extremes,’ supporting the idea that science alone cannot provide an understanding of what Iceland presents. Within accounts by British visitors a recurrent theme is trying to see Iceland as a more intense and exaggerated Scotland, but the added element of strangeness defeats such a straightforward comparison. The challenge for this book is to provide an overview of the Icelandic landscape that goes beyond a simple geological explanation, reflecting what travellers and literary visitors have observed and showing how Iceland has often played an important role in earth science debates of the day. Scientists and travellers who have visited and written about Iceland, as well as Icelandic scientists and non-scientists who rarely got the international recognition they deserved, provide the underpinning for the following pages. While aiming to present a current and scientifically informed view of why Iceland looks the way it does, it is hoped that a sense of wonder and fascination is not lost along the way. Iceland is a challenging country, ‘Europe’s last wilderness’, and not just because of the weather. In terms of location Iceland may be an ‘outgrowth of an already insignificant headland’, but the country and its landscape has an importance and fascination that far outstrips its size and location. The treatment here is largely, but not exclusively, a view from the outside, and is grounded in the earth sciences, but it is also eclectic as a range of diverse and highly individualistic characters appear, drawn by the unique landscape and culture to be found in the middle of the North Atlantic.

In the earliest accounts and records of those visiting a country considered to be at the very edge of civilization, at least from a European perspective, a number of terms recur. Adam of Bremen, in the eleventh century, describes people living in ‘holy simplicity’ on an island where ice makes the sea solid and there is a curious form of black ice that is so dry it will burn. As early as 1200, Saxo Grammaticus, the Danish historian and theologian, in his introduction to Gesta Danorum, similarly records the Icelanders’ simplicity as well as their literacy and in recounting the many marvels of the land expresses surprise that a place so cold could have so many eternally burning fires with an inexhaustible source of fuel. Despite the idea of a land full of marvels and simple, learned folk, writers also emphasized the more challenging aspects of these northern lands. The German Sebastian Franck, in the early sixteenth century, emphasized the constant presence of snow and ice, entire mountains made of ice and a landscape dominated by barren deserts – a view reinforced by the Scot Patrick Gordon a century later in his widely read Geography Anatomiz’d: a country ‘incumbered with Deserts, barren mountains, or formidable rocks’. In the eighteenth and nineteenth centuries words such as ‘awful’, ‘desolate’, ‘terrible’, ‘fearsome’ and ‘barren’ frequently recur in accounts from travellers. There is also a persistent otherworldliness and geographical novelty attached to the country. The Moravian priest Daniel Vetter (also known as Daniel Strejc, 1592–1669) visited the island in 1613 and is considered one of the more reliable earlier chroniclers. He included in the title of his account Islandia, published in Polish in 1638, the words variously translated as: ‘the island of Iceland, where are found things curious (wild) and peculiar, without precedent in our own country’. The redoubtable Austrian traveller Ida Pfeiffer, ‘the female Humboldt’, who spent three months in the country in 1845, felt ‘impelled’ to visit the region and ‘hoped to see things which should fill me with new and inexpressible astonishment’. In this she was not disappointed. When approaching Reykholt she observed that ‘the eye wanders over the vast desert, and finds not one familiar object on which it can rest’, and near Mount Hekla she describes the landscape as particularly Icelandic, ‘so strange and remarkable, that it will forever remain impressed on my memory’.

Visitors spent many pages recounting the way of life of these people living at the very margins of possible existence (the Danish authorities did after all consider the abandonment of their colony following the Laki eruption in 1783–4), usually concentrating on their diet and a perceived lack of manners; there is also often a feeling of surprise that they were so well read and informed about wider scientific and political matters. Few travelling to Iceland spoke Icelandic or Danish but found themselves able to converse with clerics in Latin, as most were well educated, usually in Denmark. This astonishment, not solely restricted to contacts with priests, is well summarized by John Barrow in 1834:

We have it on the authority of former travellers in this country, and it is confirmed by the resident Danish merchants of Iceland, that it is no uncommon thing to meet with men labouring in the fields, mowing the hay, digging turf, building the walls of their cottages, sheds, cow-houses, and performing every menial labour, who will write Latin, not merely with grammatical accuracy, but even with elegance.

Not all early travellers’ accounts are to be believed. At the end of the sixteenth century and in the first decades of the seventeenth century the Icelandic scholar Arngrímur Jónsson wrote commentaries at the behest of Bishop Guðbrandur Þorláksson refuting earlier foreign descriptions of Iceland that had proved popular in Europe. His Brevis commentarius de Islandia of 1593 specifically challenged the work of the Hamburg merchant Gories Peerse, who had perhaps overegged the exoticism of Iceland in his poem that described its natural phenomena and cultural practices, suggesting that ‘it would be truly fitting if he were to be devoured by lions.’ In 1613 Arngrímur Jónsson’s Anatome Bleeniana countered the German preacher Dithmar BlefkŒen’s 1607 Islandia, said to have been writt•en following a visit to Iceland with Hamburg merchants. Islandia gives a less than flatt•ering view of the country and its people and includes many falsehoods; BlefkŒen wrote that he had met a two-hundred-year-old man and that Icelanders could live to the age of three hundred. Whether BleŒfken ever visited the island is still a ma•er of dispute and largely considered unlikely, a seventeenth-century example of the power of fake news underwritt•en by intriguing stories. Despite these a•ttempts to refute the falsehoods that were circulating in mainland Europe, by 1767 the French traveller Yves Joseph de Kerguelen-Trémarec still reported fallaciously the existence of marble, copper and iron mines in Iceland.

The British contribution to travellers’ accounts in the eighteenth and nineteenth centuries comprised largely the reminiscences of a number of titled gentlemen, scientists, mountaineers and seasoned travellers, all of whom had the necessary wealth to support their travels. In 1772 Sir Joseph Banks, whom the king of Denmark accepted was travelling as one of a party of ‘celebrated English Lords’, was accompanied by artists, scientists, ten servants and two French horns. Originally Banks was an accidental Icelandic explorer; he had been due to travel to the South Seas on the Resolution with Captain James Cook to search for ‘Terra Australis’, but he withdrew following criticism from the Admiralty that his group was too large and in danger of taking over the expedition. At a loose end and with his party all prepared, he turned his att•ention to the north.