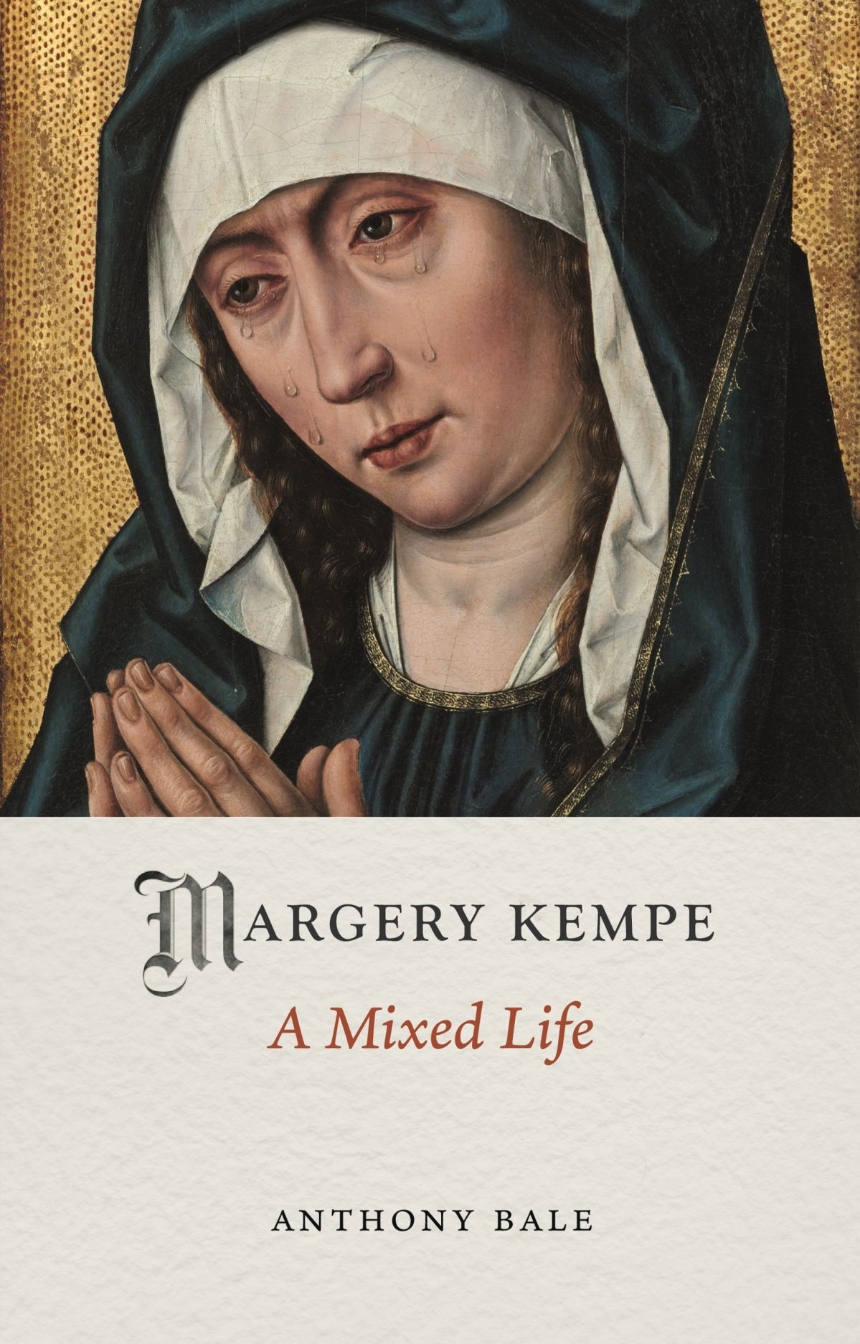 This is a new account of the medieval mystic and pilgrim Margery Kempe. Kempe, who had fourteen children, traveled all over Europe and recorded a series of unusual events and religious visions in her work The Book of Margery Kempe, which is often called the first autobiography in the English language. Anthony Bale charts Kempe’s life and tells her story through the places, relationships, objects, and experiences that influenced her. Extensive quotations from Kempe’s Book accompany generous illustrations, giving a fascinating insight into the life of a medieval woman. Margery Kempe is situated within the religious controversies of her time, and her religious visions and later years put in context. And lastly, Bale tells the extraordinary story of the rediscovery, in the 1930s, of the unique manuscript of her autobiography.

"Bale’s biographical study of Margery Kempe is among the first volumes in Reaktion’s new Medieval Lives series. Rich in detail about Kempe’s life and times, Bale’s book includes maps and photographs that enable the reader to follow her progress around the medieval world and even through the streets of modern-day King’s Lynn, where a number of later medieval sites can still be seen today. . . . Capturing Kempe’s complexity in engaging terms, this book is sure to become a staple for all those interested in the literature and culture of medieval England."

“Margery Kempe of Lynn Norfolk took pains in the decades of her prime to have her life as mother, wife, and pilgrim recorded for posterity. With erudition and sympathy, Bale frames Margery—a doubting, aching, troubled, and fiercely independent woman—within the European cities that staged her life, and so makes her more familiar than any fifteenth-century woman has ever been.”

"Margery Kempe: A Mixed Life is an evocative, vivid, and learned study of a complicated and intriguing text, The Book of Margery Kempe. Bale's captivating study blends rigorously researched biography with incisive analysis of the text. The book combines academic prowess with an almost poetic representation of people, events, and places, and brings to the fore the trials and triumphs of Kempe’s negotiation of her mixed life."

In the bustling town of Bishop’s Lynn, Norfolk, around the year 1394, a young woman is going through a difficult pregnancy. The woman has many advantages in life. She is from a well-off background, a daughter of the town’s elite. She has a good house in the town centre and many material comforts. This is her first child, and she became pregnant shortly after marriage. But the pregnancy has been utterly wretched, and fever and sickness ravage her body.

At the same time her mind is in a state of torment. There’s a guilty secret on her conscience. She knows she should have been absolved by going to confession and revealing her sins to a priest. In the fourteenth century, it was considered especially important for pregnant women to confess; a guide for parish priests says that when the mother is close to giving birth she must ‘schryve hem clene’ (make her full confession), because of ‘drede of perele that may befalle’ (fear of the physical injury that may happen). For the same reason, medieval women often wrote their wills before going into labour.

This thing on the woman’s conscience is tearing at her, causing her intense agony. Yet she has declared that she will see no confessor, that she can do her own penance. So on some days she will punish her ailing body further, eating only bread and water, while on other days she gives small donations to beggars, or devotes hours to long and fervent prayers. All this she does in order to avoid confessing her terrible sin. Indeed, in all her long life she will never disclose this secret to anyone. One can still only guess at the nature of this terrible, unspeakable, unredeemed sin, but it changed fundamentally the course of her life.

Sickness and severe illness in childbirth are nothing new to the young woman: she has seen many pregnant women suffer, and some die, often in a state of shame because of the private, intimate nature of their ailments. Local women have tried cures, following medical recipes, taking herbal baths, drinking expensive juices and making complicated powders, syrups and suppositories out of the recommended ingredients. These include acorns, goat’s milk, mint leaves, poppies, Armenian earth, the stomach of suckling hare, acacia sap, mastic gum, dragonwort, dove’s droppings in wine. But such cures do nothing to stem the expectant mother’s sickness, and she has known women suffer atrociously, from unstoppable bleeding, from problems with the uterus such as prolapse, wind or inflammation, from ulcers of the womb, and similar painful and often mortal illnesses. Medical knowledge of the time holds that one reason for sickness in pregnancy is due to ‘the feblenesse of the moder’ – that is, the frailty or weaknesses of the mother’s womb. This may be because she has been compromised by sickness, or because of her ‘gret thought’ – her anxiety or her distress. Alternatively, a pregnancy may be difficult because the mother is overweight, her fatness blocking the mouth of the uterus, holding back blood which would otherwise have been purged. Or, it could be because the unborn infant is itself ill, failing or even dead. Medieval medical guides recommend the keeping of an exotic jasper-stone about one’s person to relieve all the pains of pregnancy. These books also say that a mixture of iris, hyssop, rue and savory crushed in the best white wine promises a quick and easy delivery of the baby. The young Norfolk woman can afford anything that would help (or her father could pay for it all). But nothing has been able to stop the wretched feelings she has had during her pregnancy.

When her baby is born – a little boy named John, after his father – the young woman’s health, in both body and mind, gets much worse. For the first eight months of her little boy’s life, the woman is frantic and frenzied. At times she seems bewildered, at others hugely vexed. She receives horrifying visions of devils, visions as real to her as the pains in her belly and womb. The devils creep round her, opening their mouths, breathing scorching flames, snarling and snapping as if to swallow her whole, sometimes pawing at her, sometimes threatening her, sometimes pulling and dragging at her. They cause her to flail and throw herself about the room. This happens day and night, almost constantly. The devils scream at her, telling her to forsake Christianity, to deny God, Mary and all the saints. They tell her to reject her father, her mother and all her friends. For periods of time during this ordeal, the young woman lies thrashing in her bed, or she roams around the house, screaming in torment, succumbing to the devils’ instructions: she slanders everyone she knows, screams curses at them, swears blasphemous oaths, uses the foulest language. She slanders her own husband and her friends, and she slanders herself. She scratches in a frenzy at her skin with her fingernails. She would take a knife to herself, if she could find one. She would so love to join the devils in hell – which is where she is sure she is going. She is, as she would later describe it, ‘owt of hir mende’ (1.149) – out of her mind.

Eventually, when her family can take it no longer, the young woman is bound and restrained at all times, night and day, locked in a room at home. Warders are employed to guard her. She knows that her husband still cares about her. Her family says they are only trying to stop her from causing more harm to herself or those around her. What they are doing is indeed the standard treatment for someone who has gone out of her mind. Diagnoses of mental illness were numerous, as they are today. Terms like ‘annxumnesse’ (anxiety), ‘frenesie’ (delirium), ‘langour’ (mental suffering) and ‘misconfort’ (mental distress) conveyed different kinds of illness. London’s Bethlem (‘Bedlam’) Royal Hospital has, around this time, started to receive such patients, ‘to maintain those who have lost their wits and memory’. The binding and confinement of the insane was seen as a good way to care for (or deal with) them. The mad were worthy recipients of charity and prayers, but they were also considered possible victims of demonic possession and in need of exorcism.

About eight months after giving birth to little John – and after eight months of being highly disturbed in body and mind – the distraught young woman has still not stopped screaming and raving. At one point, as a sign of her desperate misery and, she will later say, a token of her damnation, she bites her hand with incredible violence, tearing into the flesh with her teeth. She will bear this scar for the rest of her long life. It is for her an everlasting and authentic mark of the depth of her torment and sinfulness.

One day, probably at some point in 1394, the woman’s warders are elsewhere. She lies alone in her bedchamber. Suddenly, she has a vision different from those demonic apparitions with which she had been struggling. She describes it thus:

our merciful Lord Christ Jesus – ever to be trusted, worshipped be His name, never forsaking His servant in time of need – appeared in the likeness of a man to His creature who had forsaken Him, the most handsome, the most beautiful and the most affable that could ever be seen with human eye, clad in a purple silk mantle, sitting upon her bedside, looking upon her with so blessed an expression that she was fortified in all her spirits, and He said these words to her: ‘Daughter, why have you forsaken me, and I never forsook you?’ Then at once, as He had said these words, she truly saw the air open up as bright as any lightning, and He stepped up into the air, not very hastily and quickly but elegantly and steadily, so that she could easily behold Him in the air until it closed up again. And then the creature was steadied in her wits and in her reason as well as she had been before, and pleaded with her husband as soon as he came to her that she might have the keys to the buttery to fetch her food and drink as she had done before.

This strikingly beautiful piece of writing marks the end of the woman’s first crisis and the beginning of her spiritual conversion and physical revival. She is visited by her own personal Jesus: a good-looking Christus medicus, a friendly healer, in utter contrast to the threatening devils that have beset her. He wears a purple cloak, the garment of majesty in which He was mockingly dressed at Calvary. Her Christ utters just a few words – ‘Dowtyr, why hast thow forsakyn me, and I forsoke nevyr the?’ – echoing the Psalms and Christ’s distressed cry at Calvary: ‘My God, my God, why hast thou forsaken me?’ So even though Christ appears very much as an incarnate man, He also appears as the loving God who has still not forsaken His own favoured daughter.