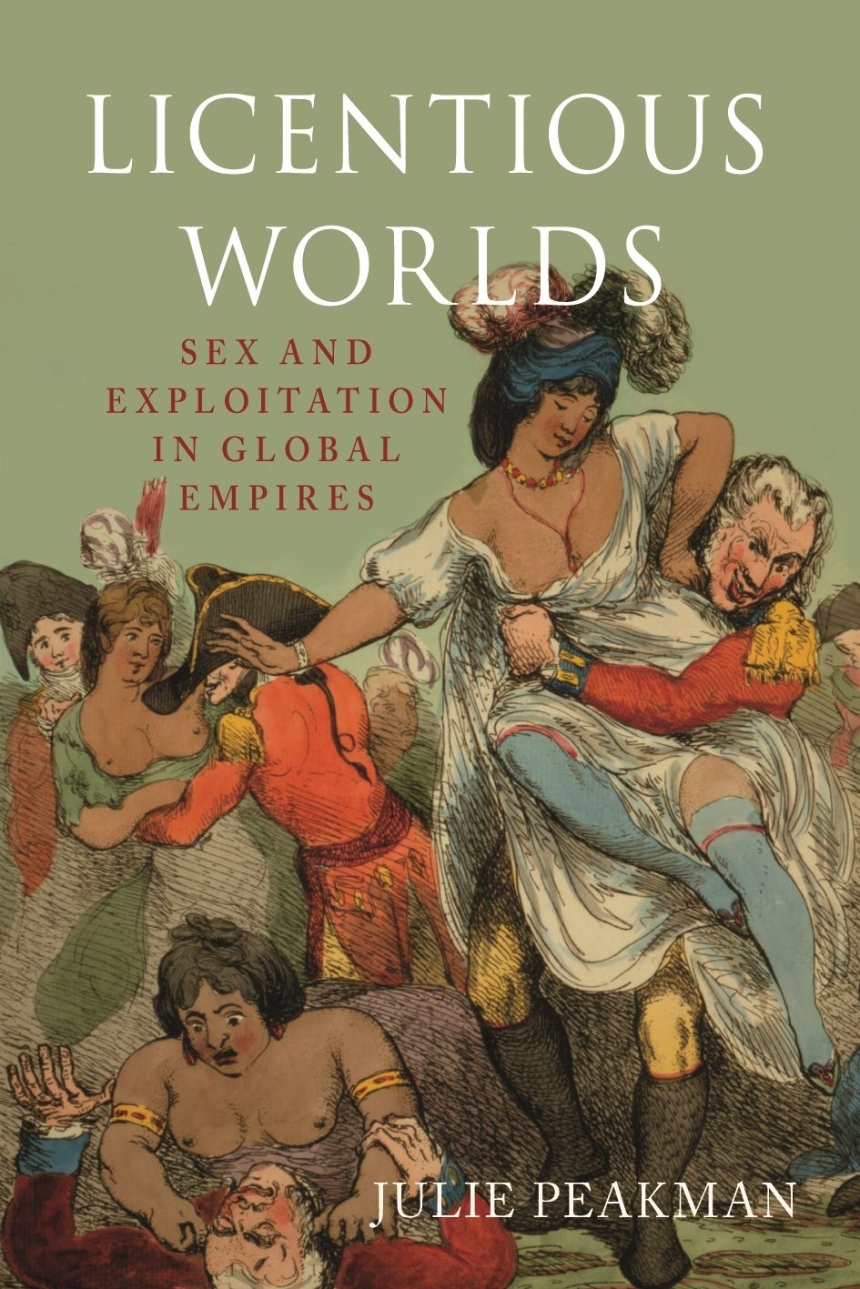 Sex and Exploitation in Global Empires

Sex and Exploitation in Global Empires

Licentious Worlds is a history of sexual attitudes and behavior through five hundred years of empire-building around the world. In a graphic and sometimes unsettling account, Julie Peakman examines colonization and the imperial experience of women (as well as marginalized men), showing how women were not only involved in the building of empires, but how they were also almost invariably exploited. Women acted as negotiators, brothel keepers, traders, and peace keepers—but they were also forced into marriages and raped.

The book describes women in Turkish harems, Mughal zenanas, and Japanese geisha houses, as well as in royal palaces and private households and onboard ships. Their stories are drawn from many sources—from captains’ logs, missionary reports, and cannibals’ memoirs to travelers’ letters, traders’ accounts, and reports on prostitutes. From debauched clerics and hog-buggering Pilgrims to sexually-confused cannibals and sodomizing samurai, Licentious Worlds takes history into its darkest corners.

“Peakman brings a compellingly direct intelligence and clarity to her analysis of the key role of women in negotiations and the maintenance of peace between cultures, and of their unconscionable sexual exploitation by men. . . . The current trivialization of the feminine is, as Peakman shows, a philosophical echo, and one that limits our understanding of equality to economic considerations. As she makes clear in this careful, incisive, and scholarly work, centuries of disregard have created an understanding of the feminine as synonymous with currency, and for one purpose: to maintain masculine supremacy in a world where anyone ‘other than the sexually dominant white heterosexual male tend(s) to be persecuted or made subservient.’”

“Peakman consulted hundreds of primary sources, including legal reports and erotica, and visited archives all over the world. Her encyclopedia of imperial sex has a formula that is repetitive but effective. . . . This book amounts to more than Carry on up the Empire meets Fifty Shades of Grey. It has a serious message: at the heart of all empire-building is a form of sex culture that varies according to time, place, and people’s experience of it.”

"Peakman has an ear for a good story and makes engaging use of a range of historical sources, from European travelers’ journals, missionary accounts, and travelogues, to sex handbooks, anthropological studies, and more. Into her fluent and compelling narrative, she blends issues of historical interpretation—about the use of sexual violence to subdue whole peoples, for example, or the impact of western men's laced-up Christian cultures of origin on their interpretations of 'native' women. . . . Peakman achieves her aim of building on more recent challenges to a history of empire as a male venture—showing instead the integral role in empire-building played by women, gender, and sexuality."

"Peakman’s Licentious Worlds, about women and the many roles they played in furthering Western imperialism, is a fascinating read. She looks at the experiences of Western women, whose records are not easy to locate, as well as non-Western women who lived in conquered territories, whose records are largely non-existent. Splitting the narrative by place and time, from efforts to settle in North America in the early seventeenth century to Japan’s forcible opening in the later part of the nineteenth century, Peakman has made excellent use of her sources, employing them to illustrate the different ways in which sexual attitudes and male-female relationships changed, not necessarily for the better, in areas that were taken over by Europeans and Americans. As a lovely bonus, the hardback version is lavishly illustrated with paintings and drawings, many reproduced in color. This book is an absolute pleasure to read. Highly recommended."

"Licentious Worlds offers an alternative history by putting the real lives of women (and crucially, marginalized men) back in the picture. Using illustrative stories from a wide range of sources, Peakman vividly explores the social and cultural impact of male empire-building. . . . A richly illustrated, persuasive and absorbing book that will appeal to the specialist scholar and the general reader. It is uncompromising in its desire to provide a balanced and historically accurate record of sex, exploitation, and empire."

"The revisionist approach encapsulated within this powerful, compelling , and stimulating book provides an invaluable contribution towards a greater understanding of the exploitation and resilience of women within the world’s imperial past."

"The book covers a wide span, is written in a readable style, and there are plenty of illustrations."

“Peakman’s impressively researched book provides a wideranging survey of sexual cultures around the world from the 1500s through the early 1900s. In a work sure to appeal to both scholars and general readers . . . she argues, provocatively and persuasively, that a new type of ‘licentiousness’ promoted by Europeans’ experiences overseas, and the sexual attitudes and practices of indigenous peoples, played a key role in the making of modern sexuality.”

“Peakman has written what may be the first genuinely global history of licentiousness, an account not only of the fantasies and exploitative sexual adventures of western male colonizers but also of the powerful elite men in the great empires of the modern world from China and Japan to India and the Ottoman world. It is world history on a new, scholarly, unideological, and theoretically informed level.”

“As erudite as it is entertaining, Peakman’s Licentious Worlds persuasively and meticulously reveals the centrality of gender systems and the control of sexuality across a wide range of empires and times.”