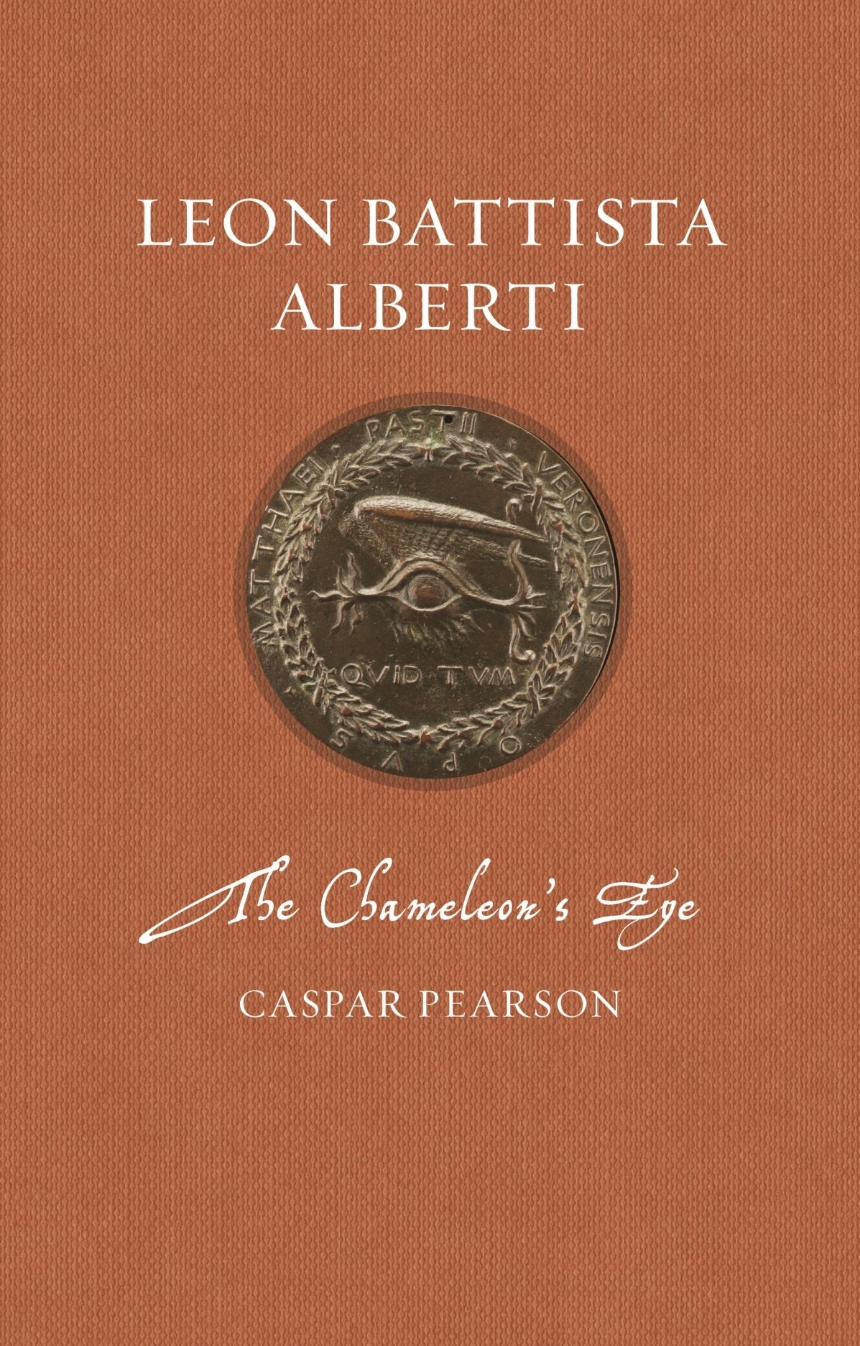 One of the most brilliant and original authors and architects of the entire Renaissance, Leon Battista Alberti had an output encompassing engineering, surveying, cryptography, poetry, humor, political commentary, and more. He employed irony, satire, and playful allusion in his written works, and developed a sophisticated approach to architecture that combined the ancient and modern. Born into the Florentine elite, Alberti was nonetheless disadvantaged due to exile and illegitimacy. As a result, he became an acute analyst of the social institutions of his time, as well as a profoundly existential writer who was intensely preoccupied with the human condition.

This new account explores Alberti’s life and works, examining how his personal and intellectual preoccupations continually pushed him to engage with an ever-broader spectrum of Renaissance culture.

"Pearson’s book is the best English introduction to Leon Battista Alberti. The volume is more than just a biography: it engages solidly with the literary and technical works of this prolific writer, and takes account of key ideas put forward by scholars in the recent Alberti revival. . . . Enhanced by a generous number of high-quality illustrations, not all of them predictable, Leon Battista Alberti: The Chameleon’s Eye is succinct, admirably clear, and often witty, all qualities of which Alberti himself would have approved."

"This is a book born out of passion: the lively passion for one of the most preeminent and yet most elusive minds of the Italian Renaissance. Pearson’s new biography of Leon Battista Alberti strikes the reader as meticulously detailed and comprehensive, while remaining, page after page, refreshingly witty, agile, and appealing. The kaleidoscopic worlds of the most versatile of Italian humanists—the most provocative and controversial one in his unabashed modernity—are wrought together dynamically. Alberti is neither the solar, jovial, and sanguine architect popularized by Jacob Burckhardt, nor the selenic, saturnine , and melancholic humanist depicted by Eugenio Garin: Pearson resists the temptation of coming up with yet another unavailing formula to grasp Alberti’s polygonal literary persona. His beautifully illustrated book is a tour de force: a masterpiece of synthesis that illuminates Alberti’s life and works with the brilliance and clarity of a prose that combines scholarly depth and sophistication with reader-friendliness."

Leon Battista Alberti is a central figure in the history of the Italian Renaissance but one who is difficult to know. A writer and intellectual, he was unusual in combining his literary activities with a strong interest in the visual arts, authoring treatises on painting, sculpture and architecture and even, in later life, turning to architectural practice himself. From the outset, this has led to a certain hesitancy regarding who Alberti really was and how he should be assessed. Famously, he came to prominence in modern times when he was lauded by Jacob Burckhardt, in his The Civilization of the Renaissance in Italy of 1860, as the ‘universal man’: a heroic, many-sided figure whose faith in reason and his own talents made him the consummate Renaissance individual. On the other hand, the art historian Julius von Schlosser, writing in the 1920s, considered Alberti to be all sides and no centre: a non-artist and a fraud who excelled at nothing in particular. Notwithstanding these polarized opinions, which embody an ambivalence going all the way back to Giorgio Vasari’s sixteenth-century biography, it was mostly Burckhardt’s view that would hold sway for a hundred years. Only in the 1960s, when the Italian scholar Eugenio Garin discovered some previously unknown writings, did a major reassessment take place. As a result of this, Alberti emerged as a much stranger and more unknowable figure than had previously been supposed: a dazzlingly original writer deeply engaged with moral and existential questions who produced works full of irony, dissimulation and wild, bizarre fantasy. It is this Alberti who in recent decades has been the object of a huge proliferation of specialist studies that, alongside new critical editions and translations, have made his works more available and more deeply analysed than ever before.

The general shape of Alberti’s life has been well established ever since Girolamo Mancini published the first edition of his monumental biography in 1882. Italian scholars have continued to lead the field but there are some excellent accounts of Alberti’s life in English. Joan Kelly-Gadol’s important book of 1969, Leon Battista Alberti: Universal Man of the Early Renaissance, contributed much to the understanding of Alberti’s technical undertakings and to the contextualization of his activities within the broader epistemological concerns of the Renaissance. Mark Jarzombek’s highly original On Leon Baptista Alberti: His Literary and Aesthetic Theories provides a fertile reading of Alberti that remains indispensable today. Meanwhile, Anthony Grafton’s major biography, Leon Battista Alberti: Master Builder of the Italian Renaissance, employs its unmatched erudition brilliantly to illuminate the world of Renaissance humanism as well as many aspects of Alberti’s thinking.

In this biography, I have sought to create a short introduction to Alberti that takes account of some of the key ideas advanced in recent publications. For the sake of accessibility and concision, I have cited modern English translations of Alberti’s works whenever they were available, and have not included original language quotations. Constraints of space have led me to focus closely upon Alberti himself, with only limited exploration of historical context. Moreover, I have had to be selective. Some of Alberti’s works are not considered, and some are treated only briefly and very partially. Certain aspects of his life, such as his career at the papal curia, do not receive sustained attention. While it does move broadly chronologically, the book is ordered thematically. In this way, I hope to give an overview of some of Alberti’s main concerns and to provide a starting point from which those who are minded to do so can explore further. With Alberti, there is always another summit just over the horizon.

ONE: Exile and Return

In the hot summer of July 1436, after sixteen years of construction, the dome of Florence cathedral reached completion (illus. 2). The cupola crowned a building that the Florentines had always intended should outshine every other cathedral in Tuscany. They had begun their project at the end of the thirteenth century, and over the next hundred years had continued to work out and refine the design. As the fourteenth century progressed, the Florentines began to envisage a cathedral with a magnificent dome resting on an octagonal base with an internal diameter of more than 44 metres (144 ft) at its broadest point, raised over the crossing (the part of a church where the nave and transept meet). In its size and height, the cupola would surpass ancient precedents at Hagia Sophia in Constantinople and at the Pantheon in Rome. Projecting a dramatic profile, reminiscent of the domes of Persian and Timurid architecture, it would stand tall upon a high drum, and on the exterior its curvature would take the form of an acute fifth, a type of pointed arch often used in gothic building. As the fourteenth century gave way to the fifteenth, much about the cupola’s appearance had thus already been decided, but its construction was another matter. So high was the dome, and so great was its span, that it was impossible to rely on the traditional method of building using ‘centring’ (a kind of wooden supporting scaffolding that holds the masonry in place and stops it from falling in before the structure has been completed). Surmounting this problem required a vast collective effort, but there can be no doubt that its resolution depended especially on one person. Filippo Brunelleschi, a goldsmith by training who worked as a sculptor, architect and engineer, invented a method of building that required no support of any kind whatsoever. On this basis, the Florentines embarked on construction in 1420, and to those who saw the building go up, its steady rise must have seemed something close to a miracle.

One such observer was Leon Battista Alberti, a 32-year-old scholar, expert Latinist and papal bureaucrat. Alberti had been in Florence since 1434, the year that an uprising prompted Pope Eugene iv to flee from Rome. Disguised as a Dominican friar, Eugene was forced to cower ignominiously in the bottom of a boat as he sheltered from the hail of stones hurled by an angry mob. Having escaped, he sought refuge in the Tuscan city, and gradually his entire court – the papal curia – relocated there with him. For Alberti, it was something of a homecoming. His family hailed from Florence, though for many years they had been excluded from the city, for reasons that we will see below. He had been there before, at least by 1430, in order to take possession of a benefice granted to him by his papal employers at San Martino a Gangalandi. Consisting of a church and some adjoining lands, from which Alberti could draw an income, it was located high in the hills outside the city. From there he would have had an excellent view of Florence and of the dome that was becoming, each day, an ever-more dominant feature of its skyline. In his regular travels around the city, meanwhile, he would have seen the cupola close up, taking in not only the structure itself, but the enormous works surrounding it: the teeming building site, the heavy lifting machines and the huge supplies of stone, brick, wood and iron that flowed in and contributed to its making.

It is small wonder that all of this had a strong effect on Alberti, for he was deeply preoccupied with the visual arts. In fact, not long after his arrival in Florence, he wrote a short treatise, On Painting, or De pictura, which he solemnly recorded having completed at a quarter to nine on the evening of 26 August 1435. Over the following year he continued to revise this text, in which he sought to provide a sound theoretical basis for the making of pictorial art, and on 17 July 1436 he sent a copy to Brunelleschi, attaching a brief introductory letter. Perhaps he was caught up in the excitement of the moment, with the cupola just weeks away from completion. In any case, the letter brims with enthusiasm, lavishing praise upon Brunelleschi, whom he addresses familiarly as Pippo (short for Filippo), and lauding his achievement as a feat of great historical import:
What man, however, hard of heart or jealous, would not praise Pippo the architect when he sees here such an enormous construction towering above the skies, vast enough to cover the entire Tuscan population with its shadow, and done without the aid of beams or elaborate wooden supports? Surely a feat of engineering, if I am not mistaken, that people did not believe possible these days and was probably equally unknown and unimaginable among the ancients.