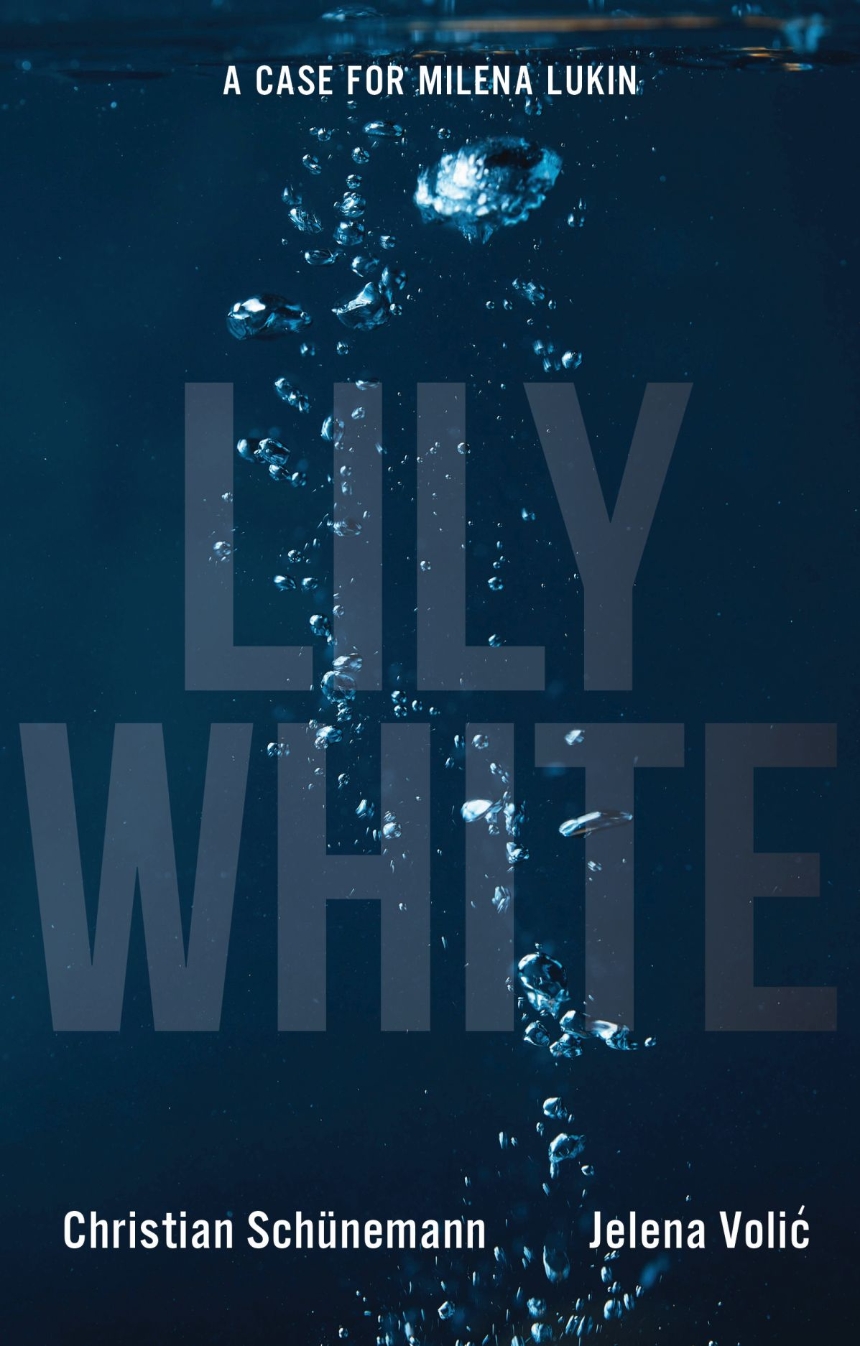 Jelena Volić and Christian Schünemann’s latest thriller follows a case for criminologist Milena Lukin, the protagonist of their previous novels Cornflower Blue and Peony Red. Set in Belgrade, a city of flux between East and West, Lily White is a complex and riveting new story that once again will take Lukin to the dark heart of Serbia’s past.

Bouquets of white lilies are mysteriously laid in a Belgrade street where, years earlier, a small Romani boy was beaten to death by two youths. One of the attackers was apprehended and imprisoned. The other was allowed to flee and, after twenty-five years on the run, he returns to Belgrade to confront his past. Days later, his corpse is found floating in the Danube River. After a cursory investigation, the police declare it to have been suicide and close the case, but the dead man’s lawyer and the criminologist Milena Lukin begin an investigation of their own. They soon stumble upon a clue that leads them into the darkest recesses of Serbian politics and to the root of a murder that shaped the fate of a country.

"The discovery of the bodies of two elite guardsmen from the Topcider military camp, Nenad Jokic and Predrag Mrsa, propels Schünemann and Volic’s Kafkaesque tale set in present-day Serbia."

"This mesmerising novel provides an incisive look at how the Bosnian War marked its survivors."

1
The head of celery had been a gift from the stallholder in the market, and the bones came from the butcher, who had passed them out to her through the back door. Svetlana scrubbed carrots, added some marjoram to the pot, and turned down the flame, so the soup would simmer but the lid wouldn’t start rattling. The soup would last for several days, maybe even a whole week. Since she’d come to her decision, life felt better. Not good, but at least a bit easier – as if a great burden had been lifted from her shoulders.

She felt around in the paper wrapper and found two small potatoes left inside. The darkness didn’t bother her – quite the contrary. Darkness was good. She gathered up the peelings and wiped her hands on her apron. Jovan was fast asleep, breathing deeply and unsuspectingly. The two bottles he had drained over the course of the afternoon and evening stood next to the waste bin; despite being drunk, he had been conscientious enough to take out the rubbish. Her beloved Jovan. The dreams they’d had: to go out into the world, to make it on their own without the clan, to be free and beholden to no one. What crazy ideas. Of course, it wasn’t meant to be.

Svetlana took off her apron. She hadn’t managed to make it, but her daughter would. One day Anna would live in a beautiful house, and the laughter of her children would fill the rooms and make her forget what had happened to her in these months – enough suffering to last a lifetime. For Anna, hopefully, the good times would one day dawn. And maybe then everything would make sense after all.

Svetlana took out the small metal box from beneath the kitchen bench. From under the mending yarn, which she had used the other day to reinforce and tighten the buttons on her pockets, just in case, she pulled out a small piece of paper, which she had purposefully set aside a few weeks ago. She opened the curtains to let in the moonlight. One day, Anna would understand what her mother had done. Until then, she’d follow the advise her mother was giving her now to guide her on her way, because Anna was not only a clever girl but obedient too. Svetlana wrote:
Learn.
Work hard.
Hold your head up high.
Don’t do anything you’d later be ashamed of.
Be happy.

She folded the piece of paper and took it with her into the room behind the curtain. Anna was sleeping soundly and breathing deeply. Svetlana brushed a lock of hair out of her daughter’s face and pressed her lips to her warm forehead, breathing in her aroma. Then she slipped the piece of paper under the pillow, stepped back, and took her cardigan from the hook.

Anna would make her way in the world. Of that Svetlana was certain, and she wouldn’t do anything to hinder her. All was well, all was as it should be, and the Almighty would watch over her daughter. Svetlana extinguished the flame under the pot, pulled on her rubber boots, and opened the door. She didn’t look back.

From beneath the water butt, she retrieved the bricks she’d hidden there a few days before. Shoving one in the left and one in the right pocket of her cardigan, she buttoned up the pockets and straightened the knitted garment. In Jovan’s shed, the glass jar with the lilies of the valley in it stood between pots of paint and glue. She picked up the jar and scooped a little more water into it from the butt.

At this time of night, hardly any cars were on the road, and she encountered no one. She walked along the dark streets in her Wellington boots, work apron, and woolly cardigan as if she were the only person in the world, clutching the jar with the lilies of the valley. Exactly the same roads, the same route, that Dušan had taken, holding in his fist the loose change that his father Jovan had, despite the late hour, allowed him to take to the kiosk specially to buy himself a bag of fruit drops. After all, Dušan had brought home a good school report – top marks in mathematics. He’d been so proud, and she had too. She still was.

‘Run along,’ she’d told him, as she propelled him out of the door. ‘And hurry back.’

Her route took her uphill to Belgrade Street – quite a climb with the bricks in her pockets. Who knows what would have become of Dušan? Maybe a teacher or – his idea of a career – a tram driver. He would surely have succeeded and overcome the disadvantages he’d been saddled with.

She noticed that the kiosk was already closed, but she didn’t mind. All those people who’d been there, and who’d either turned a blind eye to the incident or looked on impassively – she’d have looked them straight in the eye, including the kiosk owner. Would she have felt hatred? She didn’t know. She had no more tears to shed. Svetlana set the jar with the lilies of the valley down at the spot where it had happened.

At the big intersection, she bore right and crossed the park, paying no attention to the drunks and lovers in the darkness.

Branko’s Bridge was bathed in a yellow light. Although she hadn’t expected it to be so well lit, it seemed like a welcoming omen. There was only the odd car on the road. The night had something special about it. Svetlana walked on without hurrying, until she reckoned she’d reached the middle of the bridge. She couldn’t see the river, but she could smell it. A deep feeling of peace and determination came over her.

Though the railing was at chest height, it seemed lower than she had imagined. She took hold of the cold cast iron with both hands. The tips of her boots fitted comfortably between the vertical bars, as if it were a small stepladder. She hauled herself up, rested her midriff on the top of the railings, and then pulled up her other leg. Down below, she could hear the river flowing by. It sounded like a whisper, and the cool air that wafted up to her had a comforting feel. She wrapped her arms around her body as if she were hugging her little boy, closed her eyes, and stepped forward into emptiness.