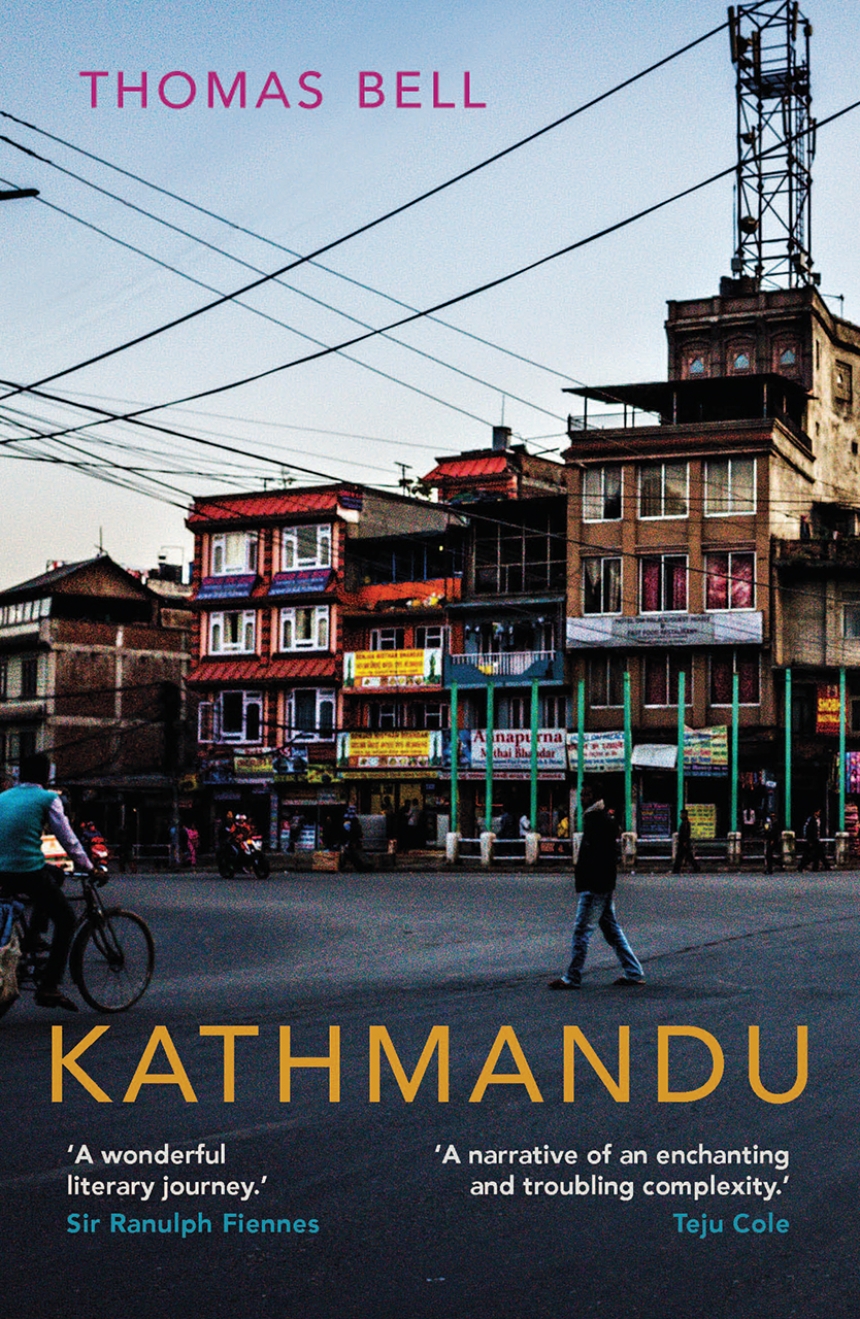 One of the greatest cities of the Himalaya, Kathmandu, Nepal, is a unique blend of thousand-year-old cultural practices and accelerated urban development. In this book, Thomas Bell recounts his experiences from his many years in the city—exploring in the process the rich history of Kathmandu and its many instances of self-reinvention.

Closed to the outside world until 1951 and trapped in a medieval time warp, Kathmandu is, as Bell argues, a jewel of the art world, a carnival of sexual license, a hotbed of communist revolution, a paradigm of failed democracy, a case study in bungled western intervention, and an environmental catastrophe. The layered development of the city can be seen in the successive generations of its gods and goddesses; its comfort in the caste system and ethos of aristocracy and kingship; and the recent destabilizing effects of consumerist approaches and the push for egalitarianism and democracy. In important ways, Kathmandu’s rapid modernization can be seen as an extreme version of what is happening in other traditional societies.  Bell also discusses the ramifications of the recent Nepal earthquake.

A comprehensive look at a top global destination, Kathmandu is an entertaining and accessible chronicle for anyone eager to learn more about this fascinating city.

"[A] sprawling history and memoir of Nepal and its fast-growing capital."

“Nepal is always at risk of being defined by the tragic and the violent, by dramatic events involving rock, ice or blood. . . . Bell’s Kathmandu . . . is therefore to be welcomed as a chance to look beyond such tragedies and learn something of Nepal’s complex religious and social history—and the equally complex machinations of politics in the capital city that has dominated it for centuries.”

“In Kathmandu, [Bell] tells the story of the city both before and, to an extent, after the quake. . . . This isn’t so much a standard history as an amiable ramble around Nepal’s past. . . .  Bell’s approach isn’t entirely orthodox. . . . But it’s all the more readable for it.”

"With extraordinary candour and courage [Bell] blazes a trail through the backstreets of the city to the hidden places most of us choose not to see, listening to conversations we prefer not to hear when visiting a country as complicated as Nepal. Fault lines affecting the whole country radiate out from the city; to ignore them, this book makes clear, is to be complicit in the myths that continue to bind Nepal in a knot of poverty and injustice. It is not just tourists who can be selectively blind and deaf, but also expats, diplomats, aid agencies and a whole host of foreign NGOs."

“The sheer breadth of subject matter Thomas Bell covers in his book, and the clear affection with which he writes about the city where he is now raising a family, are a remarkable tribute to one of the most entrancing and rapidly evolving capitals of the world.”

“Kathmandu is an extensive, well-researched and multidisciplinary writing on Nepal. Anyone who is interested to know about the art, culture and heritage of Kathmandu should read this book. All the people, including students to scholars, who want to know about Nepal and its political upheavals, would find it enlightening.”

“Explores a city that sits at a crossroads in politics, history, religion and myth—an excellent primer for those visiting post-quake.”

“[A] wide-ranging, deep-delving, clear-headed exposition of all things Kathmandu.”

“The best bits in Kathmandu are the hour-by-hour accounts of reporting brick-throwing demonstrations, or trudging mountain tracks for days in search of Maoist insurgents to interview. . . . A very enjoyable book. Above all you breathe the atmosphere of Nepal, with its blend of permissiveness and constriction. Nepal is rigid yet oddly adaptive, and resilient.”

“There is fine, unflinching journalism in this book. But there is affection, even love too. It is a powerful, intoxicating mixture. It produces an unsettling, admirable, compelling and deeply unusual narrative that matches the city in both its allure and individuality.”

"In his impressive debut book Bell traces the layers of Kathmandu’s past through to the present."

“A wonderful book that speaks to a wide audience. Situating the city within its larger political and historical contexts, Thomas Bell has produced a book that comes as close as any to capturing the spirit of the intriguing, dynamic, troubled, and endlessly confounding Kathmandu.”

Studies in Nepali History and Society, on the Indian edition

"Kathmandu remains, just like this book, eternally entertaining and oddly accessible despite the presence of many time warps in a single street and in a single sentence. . . . Bell is impelled by curiosity and an old fashioned, almost naïve spirit of adventure, but Kathmandu, because of his resourcefulness and bravado, deserves its place alongside Richard Burton’s Personal Narrative of a Pilgrimage to Al-Madinah and Meccah."

“A wonderfully discursive account of the personal discovery of a great city. Looping through centuries and slaloming between journalism, history memoir, mythology, and gossip, Tom Bell has written a portrait of Kathmandu like no other, taking us from Manjushree to the Maoists via witches, colonial Orientalists, LSD cults, spies wars, and old Serge Gainsbourg movies. A splendidly eccentric and enjoyable first book.”

William Dalrymple, author of Return of a King

“A narrative of an enchanting and troubling complexity. Tom Bell has thought through the history and contemporary reality of Kathmandu, and has written a great, subtle book, one as shadowed as Kathmandu’s alleys and as brilliant as its midday squares.”

Teju Cole, author of Open City and Every Day is for the Thief

“Kathmandu, like the country of which it is the capital, is much visited but much misunderstood. Few make the effort to look beyond the mountains and stupas, the forests and elephants. In this lucid, clever, thorough and beautifully written book, Tom Bell does this for us, recounting the gripping history of the fascinating city with equal measures of verve and care. Kings, Maoist guerillas, mountaineers, demonstrators, poets, psychopathic princes and politicians all make for a tale as colourful as a local market. A genuine must-read for any visitor to the city, to Nepal, or indeed to the sub-continent.”

"A wonderful literary journey through the streets and history of Kathmandu."

"Bell is a subtle guide through this tantric, down-at-heel labyrinth, teasing apart the layers."

The Guardian, Top 10 books about the Himalays

1. The rooftops of Patan— The allies and squares— The traffic system— The caste system— The chariot festival of Bungadya— The arrival of the monsoon

2. A teddy bear bomb—The beginning of the ‘people’s war’ – The royal massacre—The state of emergency—It leads to the dissolution of parliament—A journey to meet the Maoists in the countryside—Elections would not be possible

4. Is Kathmandu a process or a system? – The declining community of ghosts—The electricity, telephone, water, and god networks— Gayahbajye of Pimbaha— His daughter-in-law, their house—Consecrating a new building—The city as a mandala—Interview with the gubhaju—The ideology of the mandala—Dhana Laksmi’s story of the Konti hangings

5. Another year of festival— A man needs a maid—The king dismisses the prime minister—A dinner at the British embassy— An assassination, and the ceasefire— The Maoist contact office—Another trip to the hills—Maria

7. The end of the ceasefire— Pressure-cooker bombs— Protests in Kathmandu—The king is a tyrannical thinker—The police club— Kathmandu parties—Back where they first began

9. The possession of a God-Mother—Shakti and the rise of Tantra— Bungadya becomes Karunamaya—Invisible monasteries, hidden monks— Left-handed practices— No holier place than woman— Himalayan sex drug— Awful beauty puts on its arms— Gayahbajye and the witches— Dhana Laksmi sees a human sacrifice— Chinnamasta— Another meeting with the gubhaju— The terror of masked dancers

13. The Royal Coup of 2005— A special ritual at the Gorkha durbar— Brian Hodgson at the British residency—His scholarly and diplomatic concerns—Bhimsen’s tower, and his house— The vexed situation at the Gorkhali court— Hodgson equivocates— The awful downfall of Bhimsen Thapa—The Kathmandu Mutiny— The ‘British ministry’ and the departure of Brian Hodgson

14. The high rate of attrition among mid-nineteenth-century politicians—The massacre of Kot—The Indian ‘mutiny’ and Jang’s warm relations with the British—The Thapathali palace—The concept of pollution—The Muluki Ain, or Law of the Land—The rediscovery of Kathmandu’s sacred past—The purity and the pollution of the rivers—Dr Oldfield, and the character of Jang Bahadur— The squalor of Kathmandu in the nineteenth century

15. Baikuntha Rana, he slaughters a sheep— The death of Jang Bahadur and the Shamsher coup—The last darkroom—Photographs of the Ranas—Their extravagant palaces, and their decline—The Ranas, the Gurkhas, and the British

16. Some beguiling diamonds—A small shoot-up, and a bribe— The Rana method of extracting resources— Chandra Shamsher emancipates  the slaves—Dhana Laksmi and Himalaya Shamsher survive the earthquake—A new political consciousness appears— “Now we will have to bear the shit falling on our heads”— King Tribhuwan escapes and makes common cause with the People’s Liberation Army of Nepali Congress party— The modern age puts down its landing gear

17. The rules that govern everyday life— The society of the Window of the House Opposite—‘They woke up one morning from the sleep of the Middle Ages and found themselves exposed to the neon lights of an electronic age’— King Mahendra creates national unity— The rise of a cash economy, and a middle class— A first glimpse of the donors—Bhupi Sherchan

18. Les Chemins de Katmandou— A psychedelic theorist telephones the palace— ‘on average, one girl a month would flip out on acid and insist on walking through the centre of the city completely naked’—the Chief Censor— ‘Kathmandu’s youth eat a crazy salad’

19. The Physical Development Plan of 1969, and the Inventory for Protection— Professor Riccadi recalls the experts and the researchers— The gods leave the Valley— Art historians, diplomats, gangsters, and princes— The Value Crisis

22. Aid is too good for the poor—The development cycle—‘ what do aid programmes do besides fail to help poor people?’ Remittances, cartels, and the ‘rentier state’ –If our money’s not making this work, are we paying for it not to?—Don’t rock the boat—Flying kites at Dashain—Walnut theory