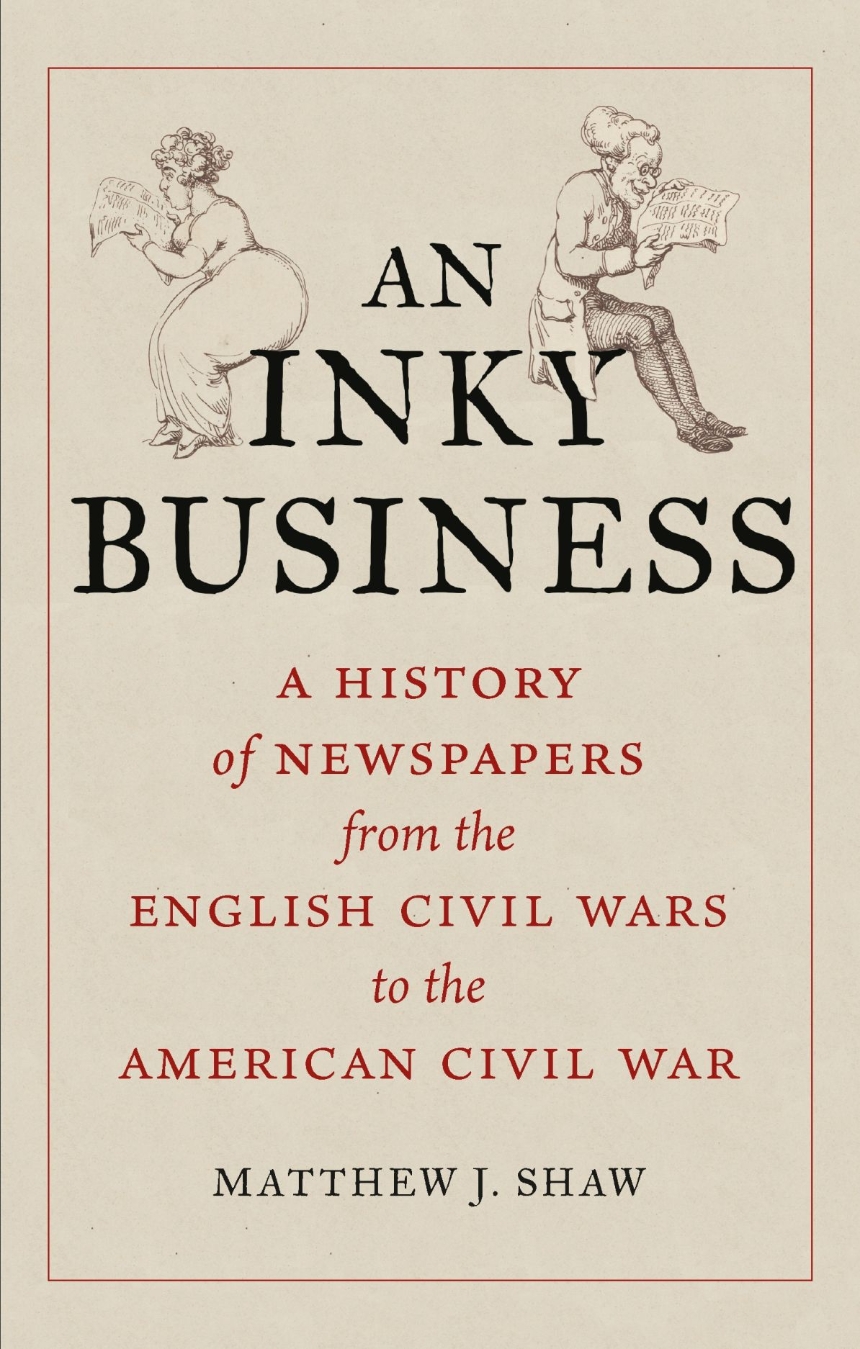 An Inky Business is a book about the making and printing of news. It is a history of ink, paper, printing press, and type, and of those who made and read newspapers in Britain, continental Europe, and America from the British Civil Wars to the Battle of Gettysburg nearly two hundred years later. But it is also an account of what news was and how the idea of news became central to public life. Newspapers ranged from purveyors of high seriousness to carriers of scurrilous gossip. Indeed, our current obsession with “fake news” and the worrying revelations or hints about how money, power, and technology shapes and controls the press and the flows of what is believed to be genuine information have dark early-modern echoes.

"A history of the radical, revolutionary, rowdy roots of the newspaper industry makes for a rip-roaring read. . . . An enthralling chronicle of news-gathering and presses rolling. . . . Many of the virtues and vices of today's press may be spotted in the papers of yesteryear. Fulminations against fake news, for example, predate not just our era but the main period covered by the book: in 1487 Henry VII issued an edict against 'forged tidings and tales.'"

“Shaw’s An Inky Business is a vivid and incisive account of the origins of newspapers and their extraordinary role in the transformation of society over two hundred years. With the very concept of news under threat, this book could not be more timely.”

Paul Lay, editor of "History Today" and author of "Providence Lost: The Rise and Fall of Cromwell’s Protectorate"

"A nuanced and thoughtful study of a key era in the evolution of the media environment."

Andrew Pettegree, University of St Andrews, author of "The Invention of News"

Our story might begin in Drogheda, a town in eastern Ireland some 50 kilometres (30 mi.) north of Dublin. It had the mis­fortune to occupy a strategic spot on the mouth of the River Boyne during the civil wars of the mid-seventeenth century. By 1649, following the overthrow of English rule, the Irish Catholic Confed - eration controlled most of Ireland. In August that same year, however, Dublin and the port of Rathmines had been regained by the English in a surprise attack by the Parliamentarian commander Colonel Michael Jones. Once the seaport was secured, Oliver Cromwell was able to land an army of 12,000 along with siege artillery in an attempt to reconquer Ireland. Drogheda, whose 6 metre (20 ft) walls and fort were defended by over 3,000 royalists, became the first town assailed in Cromwell’s campaign. Demoralized and lacking ammunition, the defending forces began to melt away. On 11 September, after offering terms of surrender that were refused, his forces overwhelmed the high walls and stormed the town. On Cromwell’s orders, and in line with the standards of the day, the remaining garrison and Catholic priests among them were given no quarter and were killed, along with many of the townsfolk. The commanding officer, Arthur Aston, had his brains beaten out with his wooden leg by the besiegers, who believed it contained gold pieces (some accounts suggest they later found two hundred coins in his belt). The numbers are unclear, but perhaps 3,000 royalist troops who refused Cromwell’s summons were killed in hot and cold blood, and three hundred of the garrison were executed after surrendering to Cromwell’s mercy, some within the church in which they were sheltering. The ranks were decimated in the Roman fashion, and many survivors deported to the West Indies. The heads of sixteen royalist officer corpses were decapitated, sent to Dublin and put on pikes on the roads into the city.

Although arguably not unusual by the standards of seventeenth-century warfare on the Continent, if not in Britain, the massacre at Drogheda remains very much a live issue, contested by historians and those on either side of the Irish question. Indeed, the paragraph above, as neutral and as objective in intention as it is, will undoubtedly contain enough to anger either side. Cromwell himself justified the killing in three ways. The behaviour of the attackers could be justified by the laws of war. It could also, he claimed, be seen as ‘a righteous judgment of God upon these barbarous wretches who have imbrued their hands in so much innocent blood’, even though many of those killed had not taken part in the confederate rebellion against the English; Drogheda had never been a confederate town. Finally, he argued for the killings as a compassionate act in the long run, as they would terrorize other towns into immediate surrender (only four other towns did refuse to surrender after Drogheda, although this included the massacre at Wexford a month later). For the royalist side, the actions of Cromwell’s armies presented them with a propaganda coup. Royalist presses quickly set to work in Britain and Ireland, printing and disseminating the news that 2,000 of the 3,000 dead were civilians, and reporting in detail the horrors of those put to the sword. The anonymous ‘A Bloody Fight in Ireland’, for example, which was printed in Smithfield, London, in 1649, reported ‘news come of the certain taking of Drogheda’ via the master of a boat from Dublin, who ‘could not stay to bring over any Letters, himselfe being a testimony sufficient’.

Yet the terrible stories of murder, killing and massacre in Ireland were sadly far from unique. While such sectarian violence and the treatment of the defeated defenders at Drogheda and Wexford offered a startling comparison with the interpretation of the laws of war on English soil (despite the many atrocities committed by Royalist and Parliamentarian alike), they were familiar to anyone who had read or heard about the horrors of the Thirty Years War. A dispute between the Catholic and Protestant powers within the Holy Roman Empire became a central European war, attracting intervention from Denmark and Sweden and growing into a clash between the Bourbon and Habsburg powers. Between 1618 and 1648, disease, dearth and conflict reduced the population of Germany by more than a third. The male population was halved.

Pamphlets—short and quickly printed accounts—offered English readers a window into the horrors unfolding across the Channel, as well as Protestant theological reflections on their cause. As one told its readers, ‘Behold here, as in a Glasse, the mournefull face of a sister nation, now drunke with misery.’ Central Europe, England and Ireland were not alone in the religious and political tumults of the early and mid-seventeenth century. France underwent a series of rebellions by members of the aristocracy and their followers, known as the Fronde; she was also violently divided between Catholic and Huguenot. News of ‘much fear’ and the ‘execution of eminent persons’, as one ‘Letter from Paris’ recounted, was collected and printed in pamphlets. North America offered some respite from such strife, at least in the thoughts of a few, high-minded settlers, such as the Pilgrim Fathers. But for most, and certainly for the indigenous peoples of that land, the New World was a land of violence, imported or freshly encountered, disease, exile and enslavement.

Our story of news begins, then, within a Europe and America divided, suffering from pestilence, war and violence. The nature of the state, the balance of power between monarch, nobility and subject, the true interpretation of scripture and the meaning of religious tradition were all in question. Print, manuscript and oral debate offered a clamour of voices, often fervent in their views, but giving little room for compromise. It was a world that was confused, argumentative and desperate for some sort of meaning or authority to be imposed. While the medieval world-view might be described as relatively static, with shared views about the natural state of affairs, the jolts caused by the overthrow of old certainties meant that the world needed to be freshly described, with new tidings and interpretations offered up to an eager public. Change, and the speed of change, gave rise to the need for regular updates: for what we now call news.

‘News’, as we call it today, had of course always been sought. The ability to produce information about current events required a certain amount of organization and technological ability, as well as creating an information hierarchy among those with access to news and those excluded from it. From the start, the production of news was also tied to official propaganda: from AD 206 to 221 the Han Dynasty in China distributed government news sheets known as tipao, a form of imperial bulletins issued by local and central government destined for consumption by bureaucrats. Either handwritten or printed by engraved wooden blocks, sadly no early tipao survive, but their echo can be felt. As a format they continued into the early modern period, and even into the nineteenth century, as ‘reports from the capital’. Information and the carriers of information were closely linked to the centres of power.

In the West, written news took epistolary form. The letter, written on rolls of papyrus paper, established itself as a routine means of public and private communication in the Greco-Roman world and carried news of goings-on across the Roman Empire. Romans could also discover the latest official news from Acta diurna (‘Daily Acts’ or ‘Daily Records’), once these initially secret bulletins were made public under Julius Caesar. Lasting until the age of Constantine, the Acta initially reported the outcomes of legal proceedings, but expanded to include more general public announcements, as well as notable births, marriages and deaths, and imperial or senatorial decrees. Again, no physical Acta survive, despite being archived after being displayed in public spaces, such as the Forum, on whitened boards (album) or inscribed on metal or stone. We do, however, know a little of how the Acta were used from other texts that survive, including accounts of slaves reading the Acta out to their master for the amusement of those at the table. There are also hints of what we might call the first journalists: a substantial number of actuarii working for the senate who gathered and prepared the information.

Others made a business out of reporting on the Acta and disseminating them to the provinces. News even spread beyond Italy, making use of Rome’s vast network of roads and maritime commercial networks. From the time of Augustus, and probably long before, official couriers travelled the roads by horse or carriage, stopping at regular staging posts. It is estimated that news could usually travel at 40 kilometres (25 mi.) a day, with 80 being possible if the news was especially urgent. In theory, this system, which represented an enormous expense, was limited to official correspondence, particularly confidential information....