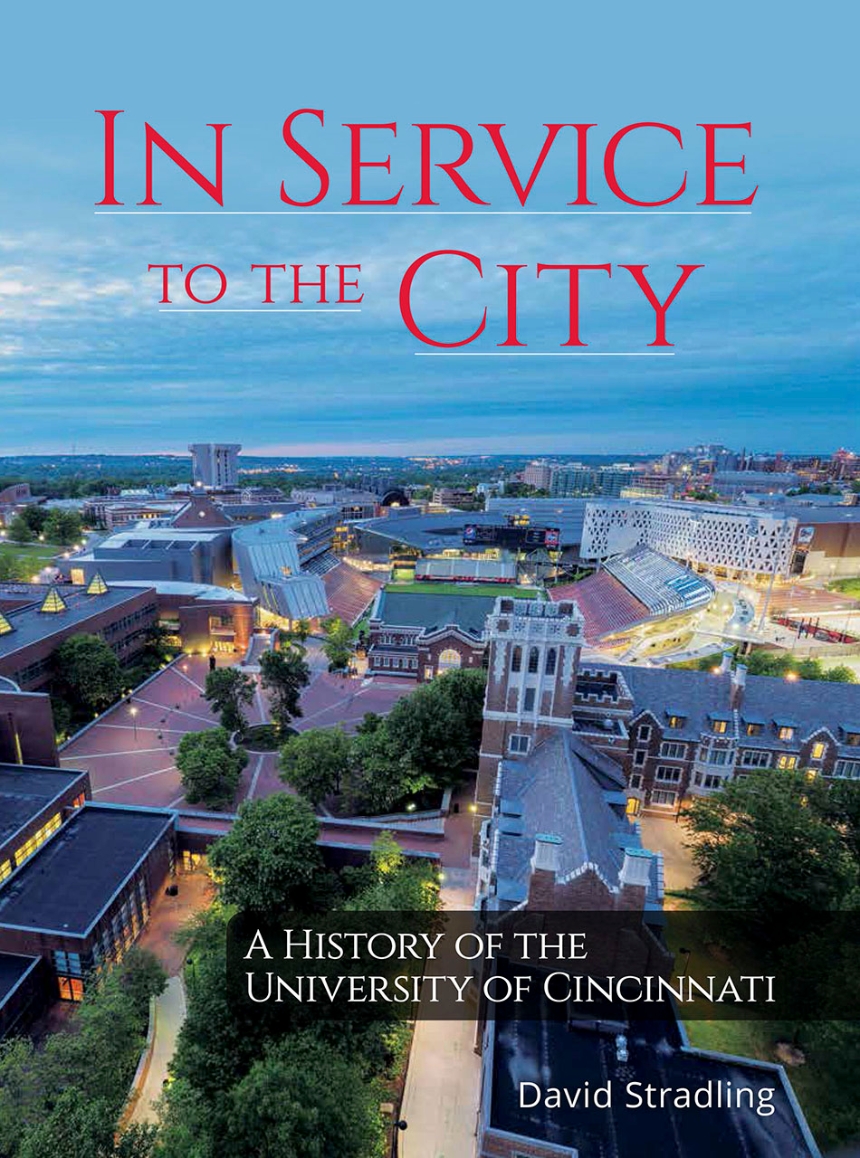 In Service to the City

A History of the University of Cincinnati

In Service to the City

A History of the University of Cincinnati

With roots reaching back to 1819, the University of Cincinnati has long been at the frontier of higher education in the Ohio Valley. While it has aspired to fulfill its mission to serve the public good, some residents, particularly those living near campus, have wondered how university decisions benefited the city at large. Long a municipal university, UC struggled to serve a broad diverse population, even as Cincinnati itself struggled in the late twentieth century. Through it all, the university has maintained its importance to the city and its alumni.

In Service to the City: A History of the University of Cincinnati, the first history of the university written in over fifty years, explores the evolving, complex relationship between UC and the city of Cincinnati. In Service to the City casts an unvarnished lens on the details of student demographics, faculty research, curricular changes, and athletic controversy to challenges associated with campus architecture and planning, neighborhood relations, regional and national consequences of urban decline, and the roles of municipal, state, and federal governments within American higher education.

Urban, environmental historian David Stradling traces UC’s story through starts and stops, growth and contraction. In the 1870s the institution began its transformation into a comprehensive, municipal university located in America’s thriving heartland. Expansion continued through mergers with Cincinnati College-Conservatory of Music and Cincinnati Medical College, among others. In 1977, University President Warren Bennis and Governor Jim Rhodes signed papers ending UC’s municipal status while securing its future as part of the state university system of Ohio.

UC maintains its strong relationship with Cincinnati, pioneering countless community and regionally oriented programs, from its expanding co-op education system, the first in the nation, to the Niehoff Urban Studio. Stradling describes the social and political activism of UC students and faculty—front and center in the civil rights and women’s rights movements, as well as the public health and environmental movements. Often they struggled to change the culture within their own institution, which at times appeared conservative or reactionary.

Drawing on archival research, Stradling recounts in lively prose and through dozens of illustrations, two-hundred years of UC history, setting the story in the context of changes within higher education in the United States.
With the cost of higher education on the minds of legislators and the public, questions first posed by Daniel Drake in 1819 upon the founding of Cincinnati College remain relevant. Who should the college serve? What and how should students learn? How can we pay for it? In Service to the City encourages readers to consider how the University of Cincinnati—with a history so entwined with its city—can balance its urban-serving tradition with its aspiration to be a leader global research university.

“The Ohio General Assembly incorporated Cincinnati College and Approved Cincinnati’s municipal charter within days of each other early in the winter of 1819.  The paths of city and university have been intertwined ever since, as David Stradling so ably relates.  In Service to the City is a fascinating read both as a history of UC’s two hundred years and as a primer for understanding recent UC-Cincinnati events.

“Focused on the complex and ever-changing relationship between the university and its host city, Stradling’s superb history demonstrates clearly that the university’s urban location and its status as a municipal institution continuously shaped its two hundred year history.”

Henry Taylor, University of Buffalo, Author of Inside El Barrio: A Bottom-Up View of Neighborhood Life in Castro’s Cuba

“Great cities and great universities grow and prosper together, but the relationship between ‘town’ and ‘gown’ can sometimes be fraught and difficult, especially during periods of urban decline and renewal. David Stradling’s bicentenary history reveals both sides of this symbiotic relationship between university and municipality in this fascinating story of one of the nation’s most prominent municipal universities.”

“In a nation dominated by private and state universities, urban historian David Stradling elegantly narrates the life of a municipal college, a city institution historically devoted to the people of Cincinnati. He depicts a school committed to research and discovery, to teaching and learning, and to community reform—all in service to the Queen City.”

Introduction
Ch. 1 A Frontier Institution: The College Edifice in the Commercial City
Ch. 2 Shall It All Be in One Place? Building a University of Cincinnati
Ch. 3 To the Woods: An Urban University Moves Away from Urban Problems
Ch. 4 A Progressive Institution: The University in the Age of Reform
Ch. 5 In the Service of the Nation: The University in War and Depression
Ch. 6 Growing Pains and Opportunities: An Expanding Campus and Mission
Ch. 7 A University at War with Itself: Campus Unrest in the 1960s
Ch. 8 A University Without Walls: The Urban Crisis and the End of the Municipal University
Ch. 9 Toward a Third Century: Competing on the National and International Stage
Epilogue: We Will Be in Cincinnati