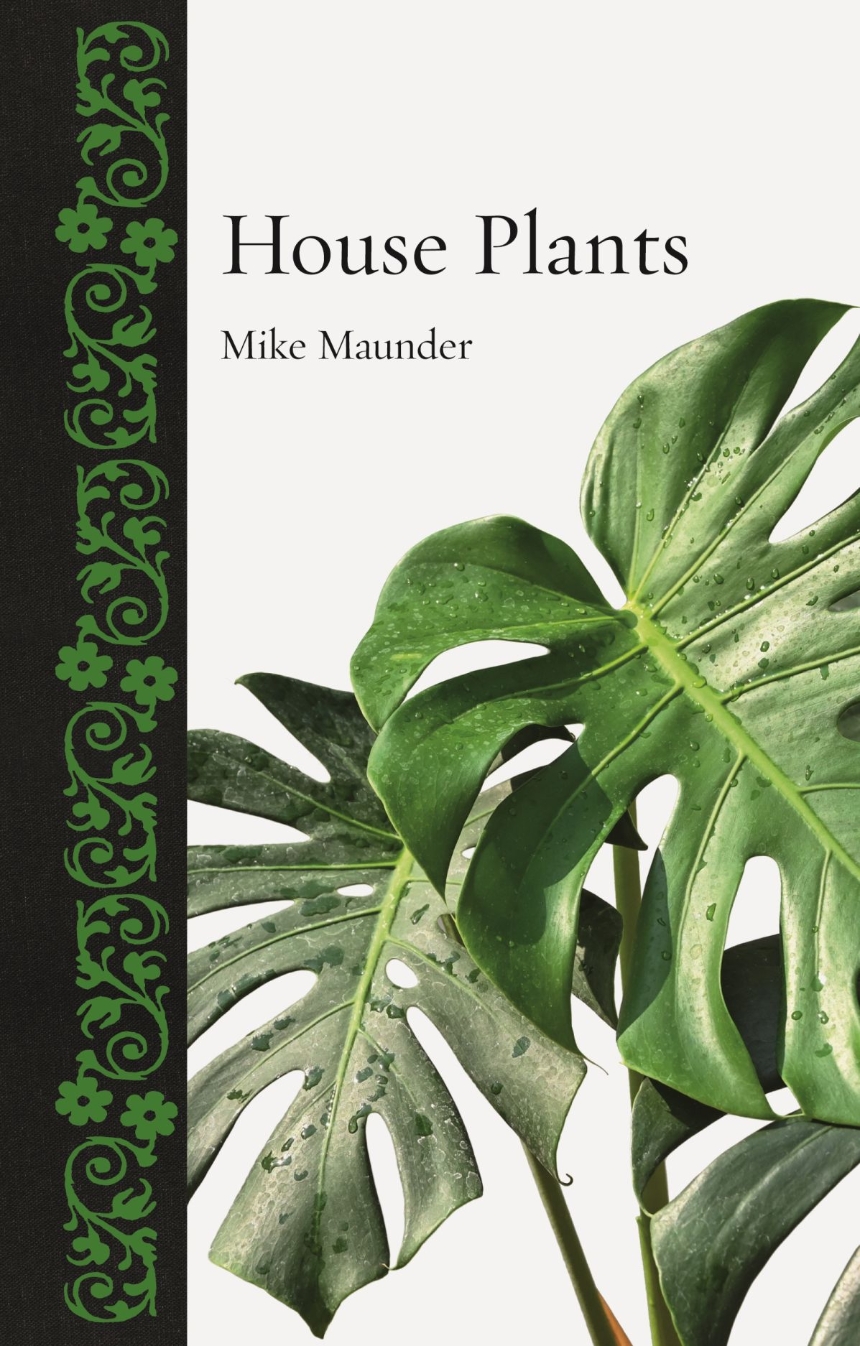 Exploring the economics, science, and cultural significance of houseplants, a many-tendrilled history of our domestic, pot-bound companions.

Our penchant for keeping houseplants is an ancient practice dating back to the Pharaohs. House Plants explores the stories behind the plants we bring home and how they were transformed from wild plants into members of our households.

A billion-dollar global industry, house plants provide interaction with nature and contribute to our health, happiness, and well-being. They also support their own miniature ecosystems and are part of the home biome.

"This is quite simply a masterpiece of a book and certainly the finest on house plants I have ever come across. Maunder uses the canvas of our obsession to have plants in the home to write a hugely thought-provoking essay on the science of an industry, the vagaries of fashion, [and] the impact on artistic movements from wallpaper to installations to the huge landscape designs of Roberto Burle Marx. . . . All this set against the febrile kleptocracy of plant hunting from around the world and the increasing evolution of house plants as an almost neurological quest to return to the wild. . . . You will return to it time and again."

"If you have a gentle affinity for houseplants now, you will love and be inspired by them after reading this book. Maunder brings our unassuming, green live-in companions to dazzling life. Who knew we were sharing our homes with characters that belong in a rip-roaring adventure novel? Plant blindness has been cured by this book!"

"A wonderful treatise that weaves science, conservation, and history into a highly readable narrative, this book is a timely reminder of our long association with house plants and the numerous benefits they bring to our households."

“Presents a fascinating (horti)cultural history of indoor plant collecting. Maunder examines the house plant in a variety of contexts, including travel, science, art, technology, and climate change, and argues for a compromise between keeping plants in domestic spaces and preserving their species in the wild.”

Jane Desmarais, professor of English, Goldsmiths, University of London, author of "Monsters under Glass: A Cultural History of Hothouse Flowers from 1850 to the Present"

INTRODUCTION: Plants of the Indoor Biome

The chief end of labor should be human happiness, and so the effort that is put forth in the cultural art of houseplants not only brings happiness to the heart of the grower, but also to the passer-by who with a hungry soul admires this plant.—Hugh Findlay, 19161

This is an exploration of an apparently mundane group of plants, the house plants. Like the ones we have with edible and medicinal plants, this is an intimate botanical relation- ship; after all, we choose to bring them into our homes. Whether a thriving and diverse collection loved by its owner, or a chlorotic embarrassment, they tell a complex story about how we live, why we need nature and how we take wild things and domesticate them.

Much has been written about plant blindness, people’s seeming ability to overlook and undervalue plants, to the extent that vital subjects such as crop diversity and plant conservation are profoundly under-resourced. However, the fact that house plants exist, are bought by the million and bring joy to many suggests that a large proportion of our species is not plant blind, and that is a very good thing.

Our love for house plants opens a door to exploring important stories about plant domestication and perhaps ultimately about the mutualism between plants and people. Some house plants exist unmodified, almost as they were when collected from the wild, for instance the spectacular Swiss cheese plant, Monstera deliciosa. Others, such as those ultimate house plants the African violet, Saintpaulia, and the moth orchid, Phalaenopsis, have been profoundly altered by breeders over many decades, and tell a story of domestication, in which art and science have worked together.

We are becoming an urban species, and more of our existence than ever is spent indoors insulated from nature and living in an increasingly impersonal world. Fewer people have gardens, and those who rent a property tend not to invest their time in cultivating a garden. At the same time, we are told we possess a deep relationship with nature that is essential for our well-being. The naturalist and writer E. O. Wilson defined this as ‘biophilia’, the ‘connections that human beings subconsciously seek with the rest of life’. Sadly, much of our history has shown that our relationship with life has been manifest through the extermination of species and the conversion of wild lands into domesticated landscapes. However, a recent and benign manifestation of biophilia is our desire to share those new domesticated landscapes, specifically our homes, with a favoured selection of plant species, chosen for pleasure and companionship. The house plant is part of our innate need for novelty, a flicker of green life in an increasingly homogeneous world.

The nomenclature of house plants is necessarily vague: they can be referred to as indoor plants, pot plants, foliage plants or house plants. The term ‘house plant’ was coined in 1952 by the English nurseryman Thomas Rochford, whose stock of ornamental plants for the house had previously been called ‘green plants’ or ‘foliage plants’. In the United Kingdom Rochford’s name quickly became synonymous with high-quality house plants, and, with the writer of horticultural manuals Dr D. G. Hessayon and the house-plant fertilizer Baby Bio, he formed part of a holy trinity for several generations of house-plant growers.

House plants are usually tropical or subtropical in origin (although in the UK the common ivy, Hedera helix, remains a favourite), rooted and potted, intended as adornments for the home, and often purchased to endorse an individual’s cultural and social identity. A house plant in London may be a garden plant in Spain or Florida. In the tropics you have the strange situation where a tropical monstera may grace an air-conditioned living room while outside the window the same species is scrambling up a tree as a robust fruiting vine. There is a shady and flexible line between the house plant and the conservatory plant, and a narrow gradient between the house plant as benign decoration and the house plant as focus for obsession. There is also a fine thread between cut flowers and house plants; a pot of poinsettia, Euphorbia pulcherrima, bought for Christmas is in reality a rooted bunch of cuttings that will likely be thrown away after a few months. Similarly, the bound and braided rooted cuttings of Dracaena sanderiana that are sold in containers often without soil (ironically known as lucky bamboo) rarely survive long. For this book the definition has been kept loose and flexible, allowing for a reasonable amount of meandering.

The culture of house plants varies across the globe, influenced by wealth, the available range of plants, culture and the prevailing sense of design. Examples characteristic of their locations are Madagascar periwinkle, Catharanthusroseus, growing in tins decorating the entrances of homes in South Sudan; potted house plants, often bizarre succulents, crowding the front doors and windows of a Tokyo backstreet; and balconies packed with house plants and prized pots of mint or basil in Mediterranean cities such as Alexandria and Barcelona.

As house plants have moved around the globe they have been modified by each successive culture, with different regions developing favourite species and cultivars. For instance, the orange-flowered Clivia lilies from South Africa, domesticated and cultivated in Europe and North America, have become popular in China, Japan and Korea, with each country favouring different types of cultivar. Different regions may have differing favourites. In the United States bigger plants such as Dracaena are popular, perhaps reflecting bigger rooms or the availability of large plants from Florida nurseries. In the United Kingdom and United States for some households the well-being of the house plants clearly takes priority over the comfort of the human residents.

Yet behind these variations there is now an increasingly cosmopolitan house-plant flora. Visit a shop in Beirut, London or Bogotá and you will find many of the same species, often the same cultivar; indeed, they may originate from the same growers or have arrived via the same horticultural auction house. The local cultures of house plants at a time when specific market-garden districts served a metropolitan area have been replaced by distant nurseries connected by plane, container shipments and long-distance haulage. This has sadly suppressed the viability and creativity of small nurseries and independent breeders.

The public interest in house plants has increased dramatically in recent years. Visit a well-stocked house-plant shop and you will witness a phenomenon long thought impossible by many horticulturists – that of young people getting excited about buying plants. As generations have moved along, so the memories of spider plants and macramé potholders have faded only to be revived by later generations as they have rediscovered the pleasures of growing plants. We are told that one in three Australian households has several house plants. Plant sales have increased, numerous books on the subject have been published and large numbers of growers keep connected through social media; for instance, the House Plant Hobbyist Facebook group has over 366,000 members and the House Plant Growers group over 157,000.

This love of house plants is a contemporary riff on an ancient tradition. Over thousands of years we have used plants, usually flowers and foliage, to mark the seasons and holy days, to bring luck and blessings to houses and to honour the choreography of life. Quite probably this relationship dates back to prehistoric burials, and it flourishes today as the billion-dollar cut-flower market. Many ancient societies used living plants to decorate temple complexes and palaces; one such example is Pharaoh Hatshepsut’s (c. 1507–1458 BCE) expeditions to the distant Land of Punt (probably Somaliland) for incense trees, Boswellia spp., to grow in her temple complex. This is not only an ancient case study in organized plant collecting but demonstrates the pervasiveness of the cult of the exotic, a cult that still drives our horticultural passions. The word ‘exotic’ is ultimately derived from the Greek exo (outside), and refers to those artefacts or products from another place or culture. It has connotations of the strange, the alluring, sometimes sinister, sometimes whimsical and, importantly with regards to house plants, tropical. For many of us, house plants are an affordable piece of exotica.

As jaded twenty-first-century citizens it is difficult for us to imagine the extraordinary impact of the first live tropical plants to have been exhibited in Elizabethan London. Then, the possession of exotica endowed the owner with an air of sophistication and worldly experience, demonstrating access to the rare, marvellous and expensive. Today, while some house plants can be exclusive and rare, more often they are affordable, an impulse buy. Some are traded through non-cash transactions of cuttings and seeds, trades that contribute to the plant’s role as a repository of personal history. Some we keep for decades, others are transient decorations to be thrown away, the dismal fate of the leafless poinsettia and rotted cyclamen in mid-January.