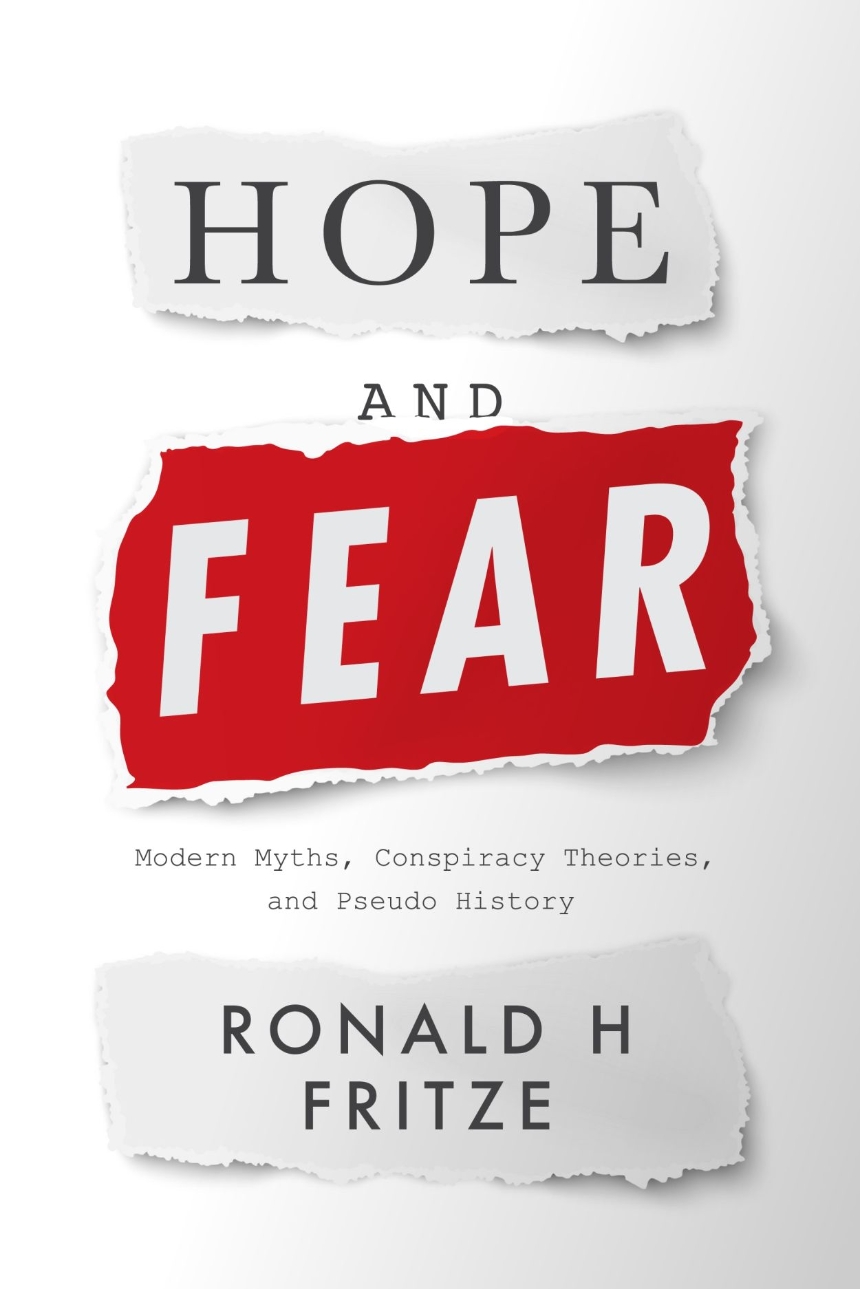 A myth-busting journey through the twilight world of fringe ideas and alternative facts.

Is a secret and corrupt Illuminati conspiring to control world affairs and bring about a New World Order? Was Donald Trump a victim of massive voter fraud? Is Elizabeth II a shapeshifting reptilian alien? Who is doing all this plotting?

In Hope and Fear, Ronald H. Fritze explores the fringe ideas and conspiracy theories people have turned to in order to make sense of the world around them, from myths about the Knights Templar and the Ten Lost Tribes of Israel, to Nazis and the occult, the Protocols of Zion and UFOs. As Fritze reveals, when conspiracy theories, myths, and pseudo-history dominate a society’s thinking, facts, reality, and truth fall by the wayside.

"When the Queen reached the seventieth anniversary of her accession to the throne recently, very little of the coverage focused on David Icke’s theory that Her Majesty is a shape-shifting reptilian alien who, along with other world leaders, is only pretending to be human in order to maintain dominance over us. You and I might think this lack of coverage was just because the theory is a load of rubbish. Icke and his followers would maintain that the lack of evidence for their statement simply shows how cunning reptilian aliens are at hiding the truth. Fritze’s exhaustively researched book examines the history of such crazy beliefs and the reasons people are drawn to them. ‘Humans like a good story’ is one of his most basic assertions and, indeed, some lunatic theories started off as fiction."

"In Hope and Fear, Fritze takes the reader on an enlightening tour of the sort of minds that latch on to what he calls 'malign forms of junk knowledge.' The book traces a common link among fans of freaky fantasies, one that stretches from the Nazi cult of the supernatural, through alien-abduction conspiracists, and up to the Covid deniers and QAnon embracers of our own mottled age."

“From the ‘crazy’ uncle spouting nonsense at family gatherings to politicians tarring opponents with outlandish crimes, the conspiratorial mindset is everywhere around us. In this remarkable book, Fritze shows how conspiracy ideas have evolved over time to serve specific ends, and how they shape our modern world.”

“Already the leading scholar of the subject of pseudohistory, Fritze offers a brilliant account of a range of modern cases, with his important up-to-the-minute examples throwing important light on the vogue for conspiracy theories. Written with wit and clarity.”

Jeremy Black, author of “The Power of Knowledge: How Information and Technology Made the Modern World”

"This fascinating book demystifies pseudohistory, myths, and conspiracy theories with surgical precision. Hope and Fear gives us a complete understanding of these worldwide phenomena and the reasons why they appear. It will be of great interest not only to scholars but to any person of intellectual integrity who questions the reality in which we live, as well as the reversal of fact and fiction to which we are exposed in our everyday life."

"[Fritz] is at his best when exploring the psychological mechanisms and historical forces that have thrust people into a post-truth world. Recommended."

The hardest things to understand about much of the past are its errors and delusions.—J. M. Roberts

A great deal of intelligence can be invested in ignorance when the need for illusion is deep.—Saul Bellow

People will believe the strangest things. In the early decades of the twenty-first century, that seems to be distinctly true. Myth, pseudo-history, pseudoscience and conspiracy theories appear to be swelling up at a bewildering rate. Or maybe it just seems that way to the people living through it. The fact is that myths, meaning tales that people believe to be true but are not, have been around from the beginning of human history. Technology like the Internet has simply made it easier to create and to spread strange beliefs and modern myths.

Queen Elizabeth II of the United Kingdom is a victim of a variety of weird beliefs and conspiracy theories. The American right-wing extremist and conspiracist Lyndon LaRouche had long been anti-British and accused British financiers of all sorts of nefarious tricks and plots to manipulate the global economy. In 1980, he added the queen to his cast of villains and accused her of being a world-class drug dealer. It became a rant that LaRouche and his acolytes continued to repeat throughout the rest of the decade. Eventually LaRouche lost interest, but the queen’s problems with conspiracy theories were not over. New Age guru and evolving conspiracist David Icke decided that Elizabeth ii was a shape-shifting reptilian alien.

Icke is a former football player, sportscaster and Green Party politician. In 1994, his focus shifted from environmental issues to include conspiracy theories. His initial ideas followed the standard New World Order conspiracy script of a secret and corrupt elite trying to dominate the world. Within a few years, however, Icke took his conspiracy theory to a new level with his book The Biggest Secret (1999), which claimed that the New World Order conspiracies were actually being controlled by a super-elite of reptilian aliens whom he called the Archons. They most appropriately came to Earth from the constellation Draco and they have thoroughly infiltrated the leadership of human society. The reptilians are shapeshifters and can take on the appearance of humans. Many world leaders, such as George H. W. Bush, were reptilians. The ranks of the Archons, of course, included Elizabeth ii. One has to marvel at the tight-lipped discretion of the palace staff, who have ensured that this astonishing information has remained a secret. Maybe they are reptilians as well?

The death of Princess Diana in 1997 resulted in a new flurry of conspiracy theories, some of which included the royal family. LaRouche and his people quickly became involved. They accused the royals of having Diana killed to prevent her marrying Dodi Fayed because he was a Muslim. Predictably, Icke also developed in great detail his own conspiracy theory about Diana’s death in The Biggest Secret. According to Icke, the reptilian royal family need periodic infusions of human dna from approved bloodlines in order to maintain their ability to conceal themselves among humans. In Princess Diana’s case, her family, the Spencers, were descendants of the Merovingian dynasty made famous in popular culture by the books The Holy Bloodand the Holy Grail and The Da Vinci Code. That royal pedigree made Princess Diana a perfect mate for Prince Charles. What she discovered was that she had married into a clan of humanoid lizards and her only purpose was to be a royal brood mare. Otherwise, her marriage was a sham. After the two little princes were born, Princess Diana became superfluous. Once she started to create problems, she needed to be eliminated. That set of circumstances led to her death, which was also a sort of ritualistic sacrifice.

Obviously to most people these conspiracy theories postulating drug-dealing monarchs and covert reptilian elites are absurd. The implausibility and preposterousness of this speculation does not stop people from believing it. LaRouche had a following and Icke’s is larger and more international. Starting out as a sage of the New Age, Icke went on to fuse it with a version of New World Order conspiracism spiced up by the addition of a nasty reptilian elite. This combination allowed Icke to appeal to both generally leftist New Agers and normally right-wing conspiracists. Although the right-wing conspiracist Alex Jones initially disparaged Icke’s reptilian thesis, eventually he came to warmly embrace it. Icke became a popular guest on Jones’s radio show InfoWars. Icke’s conception of the reptilians shifted after a few years. They became more spiritual interdimensional beings than physical interstellar travellers. The spiritual reptilians were also more benign than the malevolent physical reptilians.

Queen Elizabeth II is not the only head of state to become personally entangled with conspiracy theories. Barack Obama, the 44th President of the United States, suffered through several conspiracy theories that questioned just who he truly was. One version claimed that he was the Antichrist and another that he was a secret Muslim agent. One more claimed that Obama had not been born in the United States and so was not eligible to serve as president. The second and third conspiracy theories fitted together quite nicely and mutually reinforce each other. Devotees of the one call Obama ‘the Muslim’ while supporters of the other call him ‘the Kenyan’.

This book is a selective look at what I will call junk knowledge: pseudo-history, pseudoscience, conspiracy theories and modern myths. The first chapter discusses the concepts and terminology associated with junk knowledge. The second chapter, ‘Why Do People Believe Strange Things?’, looks at the diverse reasons why people believe things that are patently untrue, often ridiculous and sometimes even hurtful and dangerous. Evolutionary psychology, cognitive psychology, social psychology, socialization, culture and religion all play a role in enabling people to believe the unbelievable. The Ten Lost Tribes of Israel are the subject of the third chapter. It traces how the myth of the Ten Lost Tribes developed over almost three thousand years. If people could ravel back in time to the centuries after the fall of Samaria and the northern kingdom of Israel, they would discover that if they asked about the Ten Lost Tribes, they would be met by incomprehension. Still the myth developed and came to be used by Jews and Gentiles and for both philosemitic and antisemitic purposes. Chapter Four looks at the deep historical roots of modern conspiracy theories. David Icke’s theories are largely based on a confabulation of modern elements that have roots stretching back to the French Revolution, the Knights Templar, the building of Solomon’s Temple and the lost wisdom of ancient Egypt. The Illuminati arose out of this milieu and have had an amazing longevity in the thinking of conspiracists. Such longevity is especially remarkable given that the ruthless and relentless Illuminati have so far failed to achieve world domination. They are, however, persistent. The occultist and supernatural beliefs which were so popular among many Germans in the first half of the twentieth century and that were embraced by the Nazis are examined in Chapter Five. Nazism as an ideology was far more than its occult and supernatural aspects. What Nazism’s conglomeration of pseudo-history, pseudoscience and racism did was make the ideology more plausible and more acceptable by giving it a veneer of science and history. It helped to justify tyranny and genocide. Finally, Chapter Six looks at the myth of Roswell, which is the belief that an extraterrestrial flying saucer or saucers crashed at Roswell, New Mexico, in July 1947. It consists of tales of government cover-ups, acquisition and incorporation of alien technologies, secret government treaties and alliances with aliens, alien contact and alien abductions, along with other related aspects of the post-1947 UFO movement.