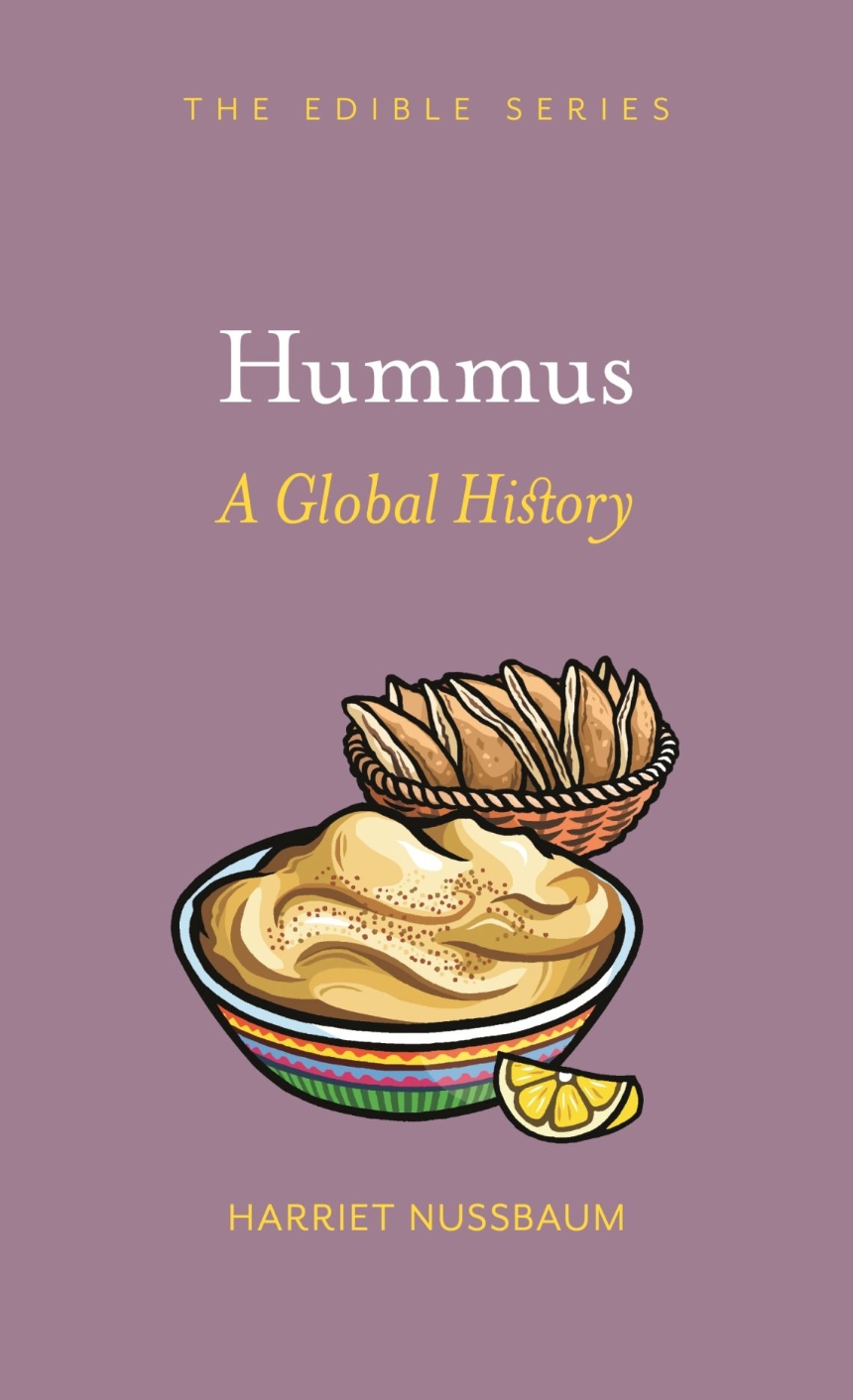 Complete with recipes, a mouthwatering look at the complicated origins and rise of the world’s favorite garbanzo bean spread and dip.

This is a global history of hummus bi-tahina, the delicious combination of chickpeas, tahini, lemon, and garlic that we know and love as hummus. The story begins in the medieval kitchens of the Near and Middle East and culminates with hummus’s rise in popularity in the Western world at the end of the twentieth century. This book also addresses the international controversy over ownership of the dish and illustrates the extent to which hummus has been embraced by Western food culture today. Though other Mediterranean dishes have become popular in the West, none can be compared to hummus, which can be found in any supermarket and in vast numbers of eating establishments. Hummus has become a global phenomenon and our very favorite dip.

"The book explores the history of the popular pulse, the huge impact it has had on eating habits around the world, and the passion that it produces politically. Nussbaum, a writer who specializes in food culture of the ancient world, brings the Levantine origins of hummus to life with details that provide context for this humble dish. . . . For anyone interested in food history in the region, this book is a very good place to start."

"A must-read for anyone interested in food culture. Readers will find Nussbaum’s little book on hummus to be a delicious treasure trove of facts and figures."

"Hummus: A Global History would make an attractive gift for the hummus-lover in your life. To paraphrase the author, the next best thing to eating hummus is reading about it, and there is plenty to satisfy the reader here."

"This is a truly fascinating book—a real whirlwind tour through centuries of history, culture, and politics. There is so much about hummus I never realized I didn’t know! I’ve eaten some of the best hummus of my life in Israel, in Palestine, and in Lebanon, and this book really has given me a fresh insight into the many-layered history behind this simple bowl of chickpea and tahini dip."

The word ‘hummus’ (sometimes spelled ‘houmous’ or ‘hommos’ in English) comes from the Arabic term h.ummus., literally meaning ‘chickpeas’. Though we have no historical evidence of the preparation of any kind of chickpea-based dip or paste until the medieval period, we can be sure that chickpeas were widely cultivated and eaten in different forms in the Near and Middle East from ancient times. The cultivated chickpea is an edible seed from a small flowering plant known botanically as Cicer arietinum. This plant has two types: desi and kabuli. Desi, native to South and East Asia, has small, dark seeds, while kabuli has larger seeds that are lighter in col - our and is native to West Asia (including the Mediterranean region). Both types are annual plants, yielding one crop of chickpeas per year. Along with soya beans, peanuts and alfalfa, chickpeas belong to the family of legume plants known as Fabaceae or Leguminosae.

According to archaeological findings, the wild chickpea may first have been domesticated as a crop some 7,000 years ago in the northeastern Mediterranean region (modern-day Syria and Turkey). This early domestication almost certainly had a profound impact on the population growth in the area. Chickpeas became a simple, affordable, high-protein staple that could be eaten in combination with locally cultivated grains, such as wheat and barley. From the Near East, the chickpea spread as a cultivated crop to other areas, such as the Middle East, South Asia and North Africa. By the Bronze Age (from the fourth to second millennium BCE), chickpeas were grown across the region, from Greece in the west to India in the east. Chickpea cultivation was later introduced to Italy, France, Spain and other parts of mainland Europe.

Chickpeas were a popular food in ancient Egypt, classical Greece and in the Roman Empire, where they were affordable, widely consumed and prepared in a number of different ways. Most simply, they could be consumed raw, salted or roasted. In ancient times chickpeas were often eaten after the evening meal, and their nutritional benefits were lauded by the Greek philosophers Plato and Socrates. Roman writers and physicians likewise remarked on the numerous benefits of consuming chickpeas. Galen, writing in the second century CE, asserts that chickpeas were extremely nutritious (more so than beans), even claiming that their consumption could cause an increase in sperm production. He specifically mentions that chickpeas were consumed both dried and ground into flour, and cooked in a soup. The legume continued to be widely eaten in southern Europe through late antiquity and into the medieval period: from there it was brought to the Americas by the Spanish and Portuguese in the sixteenth century. Today chickpeas are eaten across the world, with India, Australia, the United States and Turkey leading production. A humble but highly nutritious legume, the chickpea forms an integral part of many different cuisines worldwide.

The full Arabic name for the popular dish made from crushed chickpeas is h.ummus. bi-t.ah.ina, or ‘chickpeas with tahini’, since these are the two primary ingredients of the dish. Tahini is an oily paste made from ground sesame seeds that is used to flavour many dishes, salads and sauces in Middle Eastern cuisine. Its name is derived from the Arabic verb t.ah. ana – ‘to grind’ – and it is known to much of the world as tahini (rather than tahina) on the basis of the Levantine Arabic pronunciation of the final vowel (and via the Greek language, which employs the same term). Sesame seeds and sesame oil have long been used across the Levantine region and beyond, and archaeological and literary evidence of this practice has been found from ancient India, Egypt and the Near East, as well as from classical Greece and the Roman Empire. While we cannot be sure exactly when and where sesame seeds were first ground to a paste, we know that tahini was a popular ingredient in Levantine cuisine from at least the tenth century CE.

In its simplest form, the only additional ingredients required for hummus are garlic, lemon juice, a pinch of salt and a final drizzle of olive oil. Garlic has been used in Near and Middle Eastern cooking for thousands of years. One of the earliest recipes calling for its use is preserved on a Babylonian clay tablet dating from around 1750 BCE. This recipe requires pounded garlic in the preparation of a meat pie. Garlic was also popular with the ancient Egyptians, Greeks and Romans, who gave it to their slaves, athletes and soldiers in order to increase their strength.

Lemons, however, arrived on the Levantine culinary stage a little later. The first literary reference to a lemon comes from an Arabic document written in the tenth century CE, which describes the lemon tree as being sensitive to cold. The fruit is likely to have originated in India, along with citrons and some kinds of bitter orange. From India, citrus fruits may have first travelled westwards by sea, leaving the Indus Valley and arriving in Mesopotamia. Lemons were only widely cultivated in the Mediterranean after the spread of the Islamic Empire into that region (from the seventh century CE).

Olive oil – used to garnish hummus – is one of the most well-established Mediterranean staples, joining bread and wine to form the so-called Mediterranean triad (based on the widespread local crops of olives, wheat and grapes). Like chickpeas, olives have been part of Levantine food culture from its very beginnings. As we shall see, despite the fact that all the key hummus ingredients have been available in the region from the tenth century CE at the very latest, there is no indication that they were used together to make hummus as we know it today until much later.

Regardless of this evidence, some have attempted to claim that hummus has far more ancient origins. In 2007 the Israeli author Meir Shalev published an article in Hebrew entitled ‘Ha-hummus hu shelanu’ (‘Hummus Is Ours’), arguing for the existence of hummus in the biblical period. According to Shalev, the Book of Ruth contains a reference to hummus. In one story, the biblical figure Boaz invites Ruth to dip hermorsel of bread into h.omes. – a word that the New Revised Standard Version of the Bible gives as ‘sour wine’ and that has the meaning ‘vinegar’ in modern Hebrew. Shalev proposes that they are, rather, dipping their bread into an ancient form of hummus.

Dependent on context, modern Hebrew speakers use the word h.ummus. to mean chickpeas or hummus. But this term has been relatively recently borrowed from Arabic: an alternative word, h.ims.a, was once used in Hebrew with the meaning ‘chickpeas’. Shalev claims that the words h.ummus., h.ims.a and h.omes. are all based on the same Semitic three-letter root, h.-m-s., further leading to his assertion that Boaz and Ruth were dipping their bread in hummus rather than vinegar. He connects the meanings by remarking that chickpeas sour quickly (and therefore taste similar to vinegar and other such foods), proposing that they gained their Hebrew name this way.

Despite the connection between these words, there is no reason to assume that h.omes. – which ordinarily implies wine vinegar – has anything to do with hummus in the Book of Ruth. First, while it might not have the literal meaning of pure vinegar in the context (bread dipped in vinegar does not sound especially appetizing), it may well suggest a dish seasoned or preserved with vinegar or indeed any other sour or fermented food. Furthermore, even if h.omes. does have the meaning of ‘chickpeas’ in the Book of Ruth, as they were surely eaten in biblical times, there is no reason to suggest that these chickpeas would have been prepared in a manner similar to hummus. Certainly Ruth and Boaz were not dipping a pitta into a smooth and creamy mixture of ground chickpeas, tahini, lemon and garlic and rounding the meal off with a plate of freshly fried falafel. Shalev’s attempt to connect modern-day hummus with the world of ancient Israel belongs firmly to the twenty-first-century debate over the ownership of hummus (but more on that story later).

The simple practice of mixing chickpeas with tahini may originally have evolved as a method of substituting pulses for meat. During Lent, many denominations of Christians in the Levantine region abstain from all animal products – theirs is the original vegan Middle Eastern menu. The writer and food historian Charles Perry has suggested that the combination of chickpeas and tahini may have first been used by Christian communities during the Lenten fast.