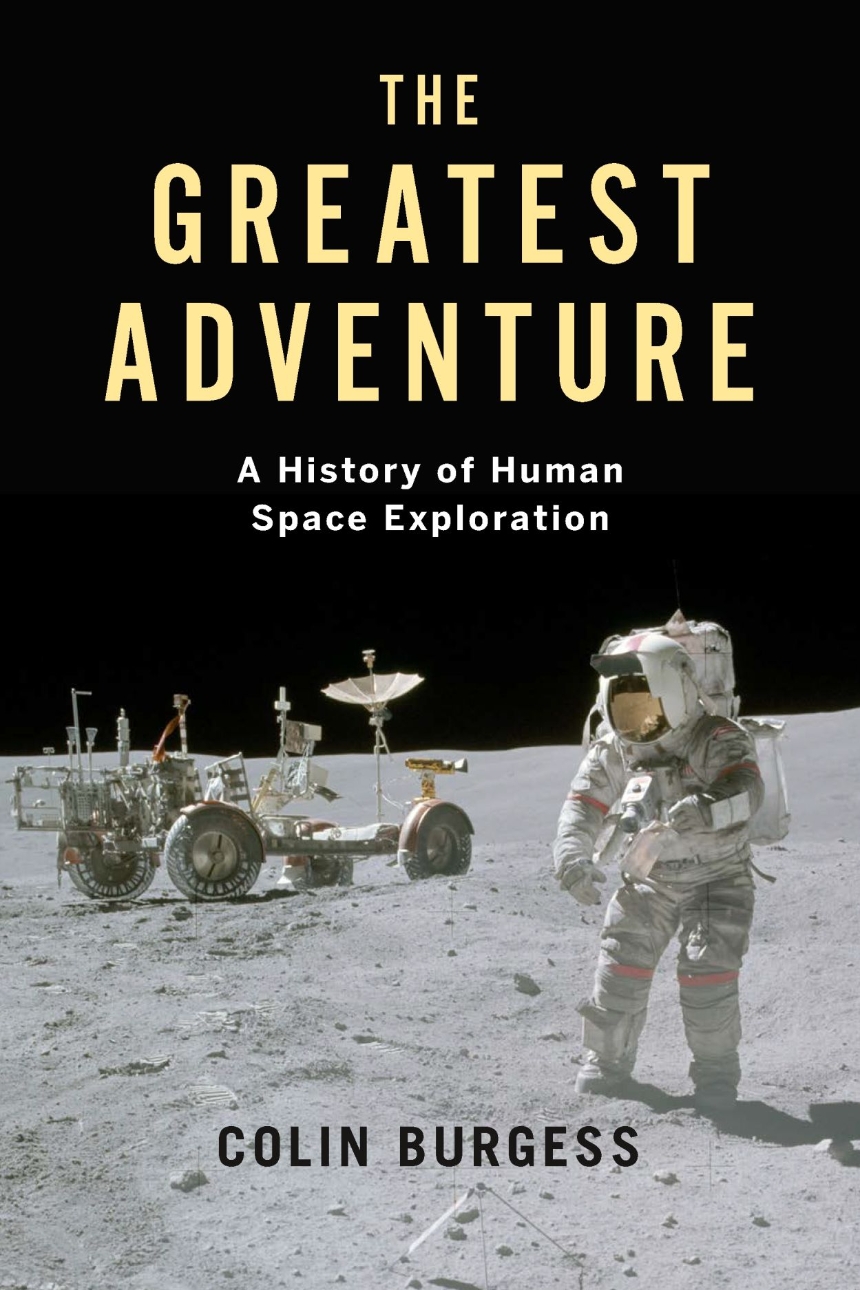 A History of Human Space Exploration

A History of Human Space Exploration

The Greatest Adventure explores the past, present, and future of the space race.

The space race was perhaps the greatest technological contest of the twentieth century. It was a thrilling era of innovation, discovery, and exploration, as astronauts and cosmonauts were launched on space missions of increasing length, complexity, and danger. The Greatest Adventure traces the events of this extraordinary period, describing the initial string of Soviet achievements: the first satellite in orbit; the first animal, man, and woman in space; the first spacewalk; as well as the ultimate US victory in the race to land on the moon. The book then takes the reader on a journey through the following decades of space exploration to the present time, detailing the many successes, tragedies, risks, and rewards of space exploration.

"Each and every NASA mission in the Mercury, Gemini, and Apollo programs [is] described in detail loving enough to thrill space nerds of all ages. . . . Burgess tells the subsequent tales of crewed spaceflight on both sides of the Iron Curtain with great verve, and a suspenseful narration of unheralded near-disasters. Gagarin’s spacecraft, for instance, only just avoided burning up on reentry, as did John Glenn’s Friendship 7 craft on an early Mercury mission. There’s a nail-biting story of one cosmonaut whose suit ballooned and nearly prevented him from getting back through the airlock."

Guardian, "Book of the Week"

"From the initial string of Soviet achievements to the ultimate US victory in the race to land on the Moon, a history of space exploration, detailing its many successes, tragedies, risks and rewards."

"Those well-versed in human spaceflight will find it an enjoyable read, uncovering new details that the author has packed into the book. Equally, if you are new to this topic, the book provides a wonderful overview of space exploration. . . . The Greatest Adventure provides an excellent springboard. . . . It's an all-round good read."

"A splendidly nerdy history of the golden age of space flight, from the Soviets shocking the world with the launch of Sputnik I to the moon landings."

"Burgess has written over three dozen books on military, airflight, and space history, and he knows how to spin a tale. . . . If you want to revisit the drama of the Space Race, Burgess’s account is excellent."

"Human space exploration was one of the greatest technological and scientific achievements of the 20th century. This book covers the whole history of space exploration, from Cold War origins in the US/USSR rivalry to modern-day commercialization of space by companies such as Blue Origin and Space X. . . . Recommended."

"'Space: the final frontier.' A frontier that humanity has been consistently exploring since the invention of rockets and suborbital flight. Burgess starts his retelling of the history of space exploration exactly there, the science of rocketry. In successive chapters, the author looks at how animals were first sent to space, followed by astronauts. The first orbital flight leads the way to the first space walks, the lunar fly-bys and of course the first lunar landing. The American and Soviet/Russian space programs figure prominently in the recounting, though emerging players like China are also discussed in the later chapters. . . . The book’s narrative style and rich illustrations help paint a detailed picture of one of the greatest human adventures of all time."

"I liked this book. It did bring back memories and reminded me of the nail-biting excitement of the 1960s and 1970s. . . . I genuinely hope that renewed interest in reaching the Moon and Mars will generate the excitement we felt and feel that this book would give any student of space flight a good grounding of the history leading up to our latest or future adventures."

"The guide to this adventure is Burgess, a long-term observer of human spaceflight and the author of many books on space exploration. . . . Well illustrated with black-and-white photos, this is a very readable account of the first six decades of humanity’s efforts to access and utilize near-Earth space, and highly recommended for anyone who is unfamiliar with the remarkable international endeavors that have opened up the final frontier."

“A fresh, crisp, and insightful chronicle. Burgess wings the reader through humankind’s initial, sometimes faltering, journeys into outer space; and our first footprints on another world. But these were just the start. Strap in! From these beginnings mankind personally touches the Kosmos in its Greatest Adventure.”

“Burgess has contributed to the library of space history something it has sorely lacked. When people ask what the one book is that they should read to learn about human space exploration, I now know exactly where to send them. This engaging, comprehensive history covers everything from the early days of rocketry to a new era of exploration that is dawning this very moment.”

“This journey through the thrilling decades of human spaceflight chronicles the highlights of exploration, with all of its triumphs and tragedies. It's an engaging read, perfect for those who have never read a space book before and want to know what humankind has accomplished out in the void.”

Francis French, coauthor of "In the Shadow of the Moon: A Challenging Journey to Tranquility, 1965–1969"

Astronomy, the study of our Moon, the planets, stars and other celestial objects, is widely regarded as our earliest science. Once astronomers and philosophers began to comprehend our planet’s actual position in the universe, those myths of old mostly gave way to later theoreticians musing about ways to somehow fly to our closest celestial neighbor.

Since 1915, the National Advisory Committee for Aeronautics(naca) had been working on problems associated with aircraft flying faster and higher, incrementally extending its research to high-altitude and space flight. In April 1958, Congress took the first steps to set up the new civilian space agency, and President Eisenhower signed the National Aeronautics and Space Act three months later, on 29 July. A further three months on, the National Aeronautics and Space Administration(nasa) officially came into being, headed by the agency’s first administrator, T. Keith Glennan. On 1 October, NASA began operations by fully absorbing naca, its 8,000 employees and five research centers, and its $100 million annual budget.

In the years to come, America’s space programme would enjoy tremendous advances in technology, with NASA’s astronauts accomplishing goals of increasing complexity, length and difficulty, despite some tragic setbacks. Although he never lived to see the first American astronauts walk on the Moon before the end of the 1960s, the Apollo programme that placed them on the lunar surface will forever exemplify the spirited character and commitment of Kennedy’s presidency. In April 2021, the world commemorated the 60th anniversary of the first human space flight by Soviet cosmonaut Yuri Gagarin. When that anniversary rolled around, somewhere in the vicinity of 550 people had been launched into space, slightly less than two-thirds of them Americans, and a number that disproportionately includes fewer than seventy women.

To date, there have been eighteen astronaut and cosmonaut fatalities during space flights, including fourteen people lost in the Challenger and Columbia space shuttle tragedies. Several astronauts have also died while training for space missions, including the three Apollo crew members who perished in a ferocious launch pad fire in January 1967. Other fatalities occurred during space flight-related activities, including 24-year-old Valentin Bondarenko, a member of the Soviet Union’s first cosmonaut team, who died in a test-chamber fire fueled by a pure oxygen environment in March 1961. Despite these tragedies, all those participating knew and accepted the hazards involved in flying into space and mourned the loss of their colleagues. They realized that space exploration is a human imperative and that it would continue despite the losses.

As we prepare for the next six decades of space travel, which will undoubtedly include fully commercial journeys by numerous national and private participants, whole new generations of space explorers will travel beyond low Earth orbit once again, on journeys to the Moon and Mars and many other exciting possibilities within our solar system.

Unlike those people from ancient and even more recent times, who could only gaze at the Moon and contemplate what it would be like to travel to that magical place and other worlds, we have collectively witnessed those fledgling steps out into the universe. Travelling further afield in space is our undeniable destiny and given the spur of human curiosity to seek and explore, such aspirations are both beckoning and achievable.