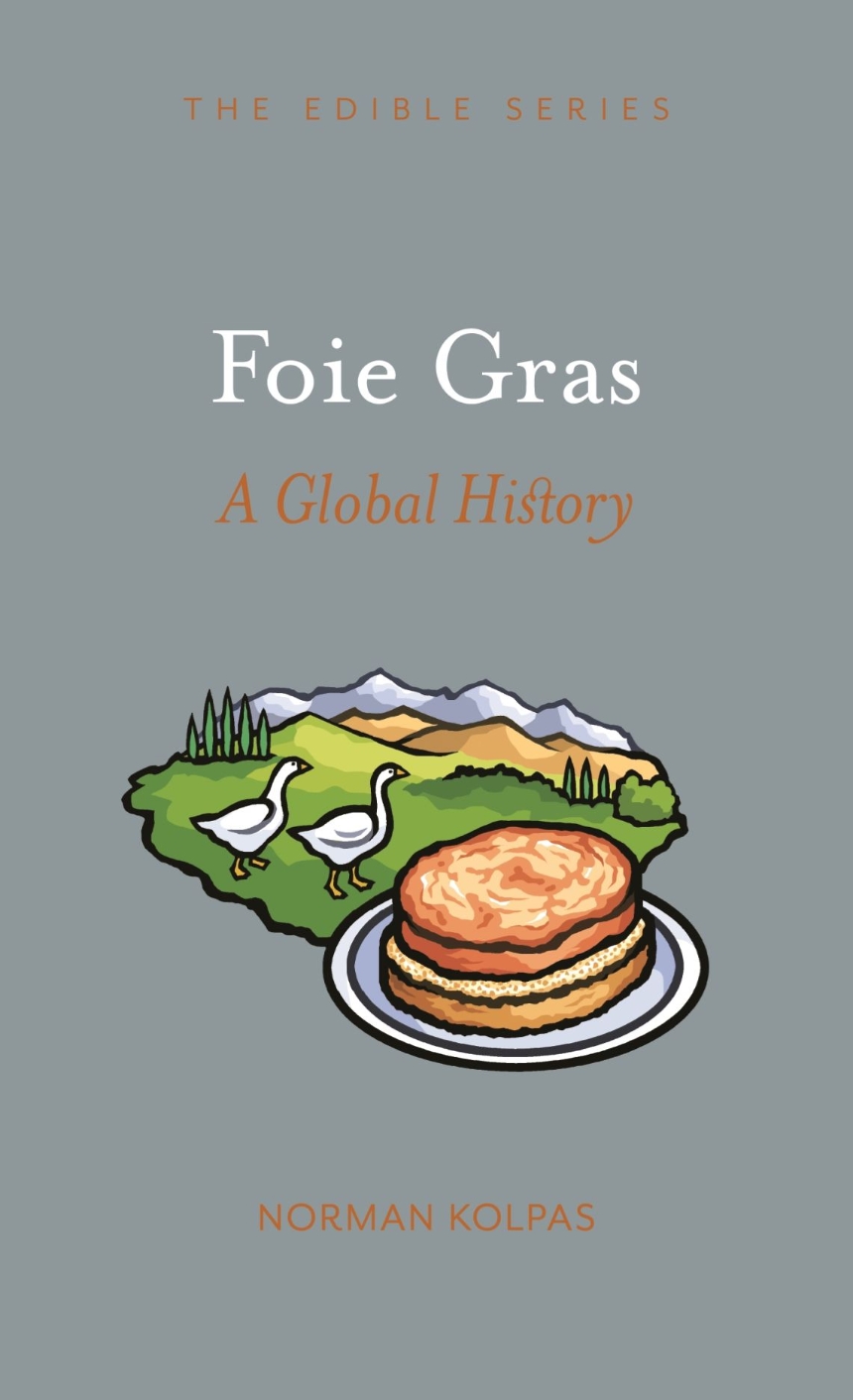 "A savory, unctuous delight, foie gras ranks near the top of a gourmet’s most prized and coveted gustatory pleasures. . . .  Kolpas inventories foie gras’ appearance in literature (Melville, Maugham), art (Monet), and even music (Rossini). Full color pictures entice, and Kolpas’s enthusiasm shines forth throughout, yet, he refrains from belittling foie gras’ adversaries."

"Kolpas argues that overfeeding geese mimics what pre-migratory birds do naturally, and our disapproval betrays an ignorance of bird physiology. . . . [An] excellent, brief chronicle of foie gras."

"Whether the recent decision of Fortnum & Mason to stop selling foie gras has you applauding or appalled will depend on where you stand when contemplating this French delectable. Kolpas's work will probably not be of interest to the former camp, but the latter is treated to a summary of the 4,500 year history of foie gras, from Ancient Greece, Egypt, and Rome, to Jewish cooks in the Middle Ages, Escoffer's 85 recipes, and its role in Hungarian cuisine."

"Kolpas strives to provide a balanced account of this debated pâté’s history and production from ancient Egypt to modern times."

"Depending on your perspective, says food writer Kolpas, foie gras—French for the 'hyper-fattened liver of a duck or goose'—is either a 'heavenly hybrid between meat and the richest butter or cream' or, to its many detractors, 'the nadir of humankind’s cruelty to animals.' Scenes of force-feeding waterfowl to yield greatly enlarged livers were depicted on ancient Egyptian bas reliefs, and the practice has continued, from medieval Jewish farmers to modern French chefs. It’s all here, gastronomic delights and warts included, with a comprehensive collection of recipes, including one for foie gras ice cream. Bon appétit. Or not."

“An engrossing story about one of the world’s most contentious, polarizing foods. This book may read as either tantalizing or repugnant, depending on the reader’s perspective, a dichotomy that makes foie gras so compelling. Kolpas does a great job of mixing historical and literary references with foie gras facts and practical advice that would be impressive just for the research required. Thankfully, Kolpas doesn't just stop at the library stacks in telling this tale.”

“Foie gras is an icon of the classic French kitchen. Kolpas not only deftly explores the history and culture of this regal dish but also thoroughly investigates and explains the ethical issues and controversies that constantly swirl around it. The result is an enthralling story perfect for any food lover who is intrigued by this one-of-a-kind ingredient.”

Foie gras: the name says it all in two succinct French words that translate simply as ‘fat’ or ‘fatty’ (the adjectival gras part) and ‘liver’ (foie). Yet, the mere utterance of that rhyming syllabic pair is more likely to send omnivore food lovers into rapturous swoons of anticipation and animal rights activists into par ox ysms of outrage than any other foodstuff known to humankind. Why is foie gras such a dramatically polarizing subject? Even the briefest explanation reveals the cause.

The hyper-fattened liver of a duck or goose, foie gras tastes to many of its devotees like a sort of heavenly hybrid between meat and the richest butter or cream, coupled with a meltingly smooth texture that beguiles the tongue whether the foie gras is served hot as a rapidly pan-seared slice or more gently cooked and then presented cold. It inspires recipes that range from classic simplicity to high-fl ying artistic creativity, and, beyond those logical extremes, from culinary excess to pop culture absurdity. Self-proclaimed gourmets have been known to extol foie gras as the pinnacle of gastronomic luxury.

It’s important to note, as a quick aside, the differences between the foie gras of geese and ducks. For many centuries, foie gras came primarily from geese – the Landes and Toulouse species eventually becoming the most reliable sources. But goose foie gras – a larger liver with a generally subtler flavour than the product from ducks – is a more seasonal product relying on the breeding habits of the bird. This is why in the twentieth century ducks gradually became the primary source of foie gras, the industry coming to rely upon the Mulard duck, a sterile hybrid of female Pekin and male Muscovy ducks that is easily bred year-round for a more consistent supply of the plump liver.

Regardless of the source, the many people opposed to foie gras revile it as the nadir of humankind’s cruelty to animals. They focus, understandably, on how that prized liver is fattened: through a force-feeding process that pushes to the extreme the natural impulse of geese and ducks to overeat before they migrate so that they can store in their livers reserves of energy for the long flight ahead. The result, as food scientist Harold McGee describes in his authoritative book On Food and Cooking, is ‘a kind of living pâté, ingeniously prepared in the growing bird before it’s slaughtered’.

As with many contentious topics, arguments both reasonable and extreme can be made in support of the opposing sides in the foie gras controversy. Leading admirers have savoured its pleasures and sung its praises down through the centuries and up to the present day. ‘I happen to think that foie gras is one of the most delicious things on earth and one of the ten most important flavours in gastronomy,’ proclaimed the late chef, author and television culinary explorer Anthony Bourdain (without going on to enumerate what those other nine flavours were). Similar feelings were expressed by nineteenth-century French gastronome Jean Anthelme Brillat-Savarin, author of The Physiology of Taste (1825), who tremulously described the rapturous reception when a large foie gras from Strasbourg was ceremoniously carved at the dinner table: ‘I saw successively printed on every face the glow of desire, the ecstasy of enjoyment, and the perfect calm of utter bliss.’ More succinctly, yet poetically, chef, cooking teacher and writer Katherine Alford described it simply as ‘a calling card of luxury’.

Foie gras’s opponents, however, argue that no level of human bliss should ever be achieved at the expense of an animal’s suffering. They focus their attention largely on the force-feeding practice known by the French term gavage, a noun descended from the seventeenth-century verb gaver, meaning to stuff or gorge, as well as on the cramped pens in which the birds are kept for fattening; injuries some sustain during the feeding process; and extreme discomfort, inability to move, internal organ failure and even death that may occur as some birds approach their maximum weight before slaughter. Posters and websites from animal rights organizations show hard-to-stomach photos of animals in severe distress, emblazoned with all-caps slogans like ‘cruelty is no delicacy’. Clearly, such images are not staged. Protesters picket and lead boycotts of restaurants serving foie gras, and food emporia selling it, from Paris to London to Los Angeles. Celebrities such as Kate Winslet narrate anti-foie videos. Attempts to ban its production or sale, or restore producers’ and sellers’ rights, drag on around the world, from local municipalities to the UK’s Houses of Parliament, all the way up to the supreme courts of Israel and the United States. Feuds even break out between top restaurateurs, as when the late Chicago chef Charlie Trotter taunted local rival Rick Tramonto – who refused to remove foie gras from his menu back in 2005 – by provocatively remarking to Chicago Tribune reporter Mark Caro, ‘Maybe we ought to have Rick’s liver for a little treat. It’s certainly fat enough.’

Such inflamed passions should lead those who strive to understand issues with more level heads to hit the pause button and more calmly examine these highly complicated issues. That’s the stance this book resolutely aims to take. Yes, there are documented cases of cruelty in the traditional production of foie gras. Yet a good many of those cases focus on old-fashioned methods of gavage, while modern foie gras producers strive for more responsible animal husbandry and treat the birds they raise – and, yes, eventually slaughter – in efficient and humane ways, even mechanizing gavage to maximize production efficiency while minimizing the risk of trauma to the animals.

Objections to foie gras can and should also be viewed as part of broader issues involving animal rights and animal cruelty in the production of so many of the foods we eat. Indeed, some food producers and chefs consider protests against foie gras to be a matter of this luxury ingredient, enjoyed mostly by the well-to-do, being used as the thin edge of a wedge that activists hope will eventually lead to the banning of many other, more common, animal products. While that may be an extreme view of protests that no doubt have the heartfelt goal of avoiding unnecessary suffering for living creatures, it nonetheless raises some troubling broader questions many food-lovers would rather not think about regarding animal treatment in the factory farms that mass-produce the foods many of us eat every day.

Regarded in such a context, the real issue becomes not the possible cruelty of foie gras but, more broadly, the commodification of living creatures for food – not to mention its impact on the environment and climate change. Although those are issues worthy of deep consideration by any ethically minded human being, they are beyond the scope of this study of an ingredient that has a rich history – both literally and figuratively – more than four and a half millennia long.

Four and a Half Millennia of Foie Gras History

Scholars generally agree that the earliest recorded represen tation of foie gras dates back as far as around 2500 BC. A bas-relief from the age of the pyramids (c. 2686–2160 BC) – found in the mid-nineteenth century by archaeologists in the necropolis of Saqqara near the ancient Egyptian capital of Memphis, approximately 30 km (19 mi.) south of present-day Cairo in the Nile River delta – clearly depicts men force-feeding an orderly flock of domesticated geese. So the famed ‘boy king’ pharaoh Tutankham un – who lived a mere eighteen years (c. 1341–1323 BC) and is more familiarly known today as King Tut – may well have been among the earliest luminaries to feast on the fattened livers of waterfowl.

It does not take a great leap of imagination to fi gure out how foie gras was fi rst discovered. Migratory birds were long part of the diets of ancient peoples, as well as being considered symbols of humankind’s connection to divine powers up in the heavens. The waterfowl would have been observed to eat avidly and put on considerable weight before their migrations in late autumn or late spring for food or nesting purposes. Those that happened to be caught and killed just before their long pre -winter or pre -summer fl ights would have been found to possess livers that were greatly enlarged in size. Once cooked, the rich flavour and silky texture of those organs would have been self-evident and instantly prized.

Of course, without the intensely focused fattening process involved in preparing foie gras today, the livers of those fattened geese may not have been quite as unctuous as the product we know in modern times. The overly plump birds would also have been appreciated for their abundant stores of body fat, a valuable and highly flavourful medium for cooking – as many of today’s food-lovers who have savoured potatoes fried in duck or goose fat will understand.