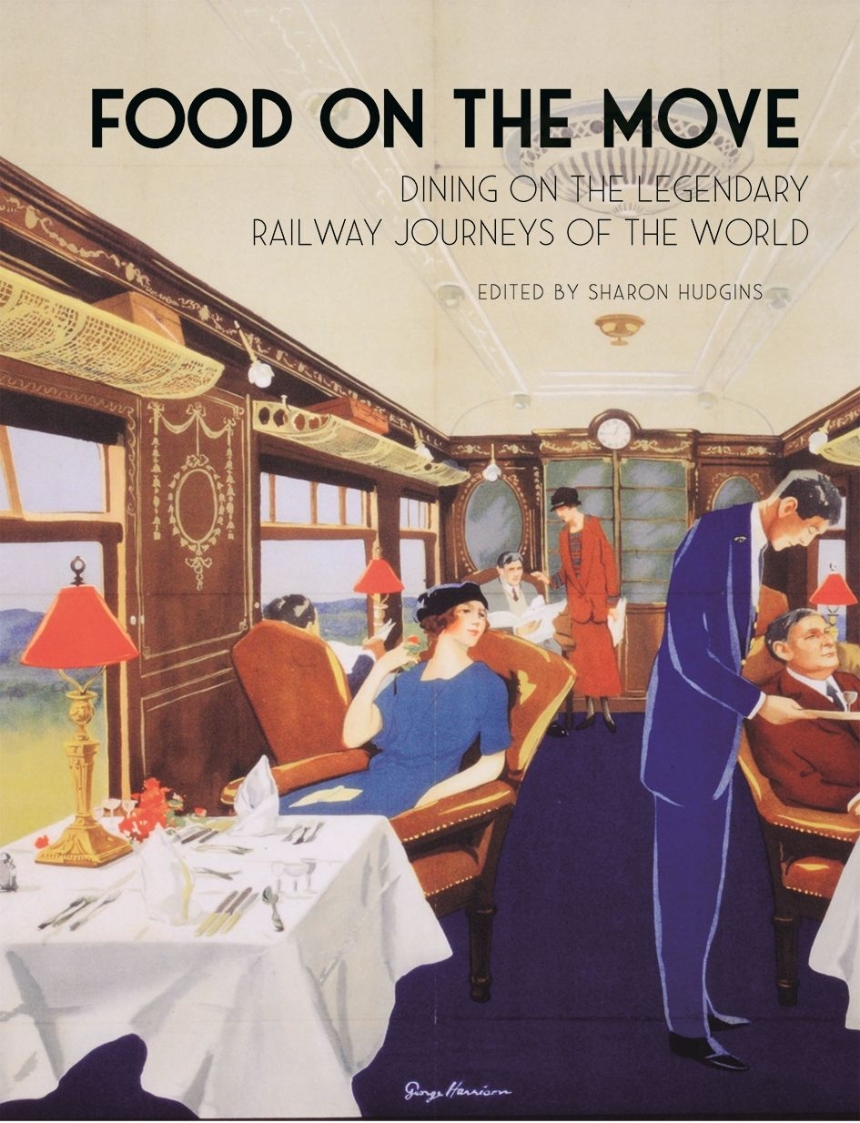 Food on the Move

Dining on the Legendary Railway Journeys of the World

Food on the Move

Dining on the Legendary Railway Journeys of the World

All aboard for a delicious ride on nine legendary railway journeys! Meals associated with train travel have been an important ingredient of railway history for more than a century—from dinners in dining cars to lunches at station buffets and foods purchased from platform vendors. For many travelers, the experience of eating on a railway journey is often a highlight of the trip, a major part of the “romance of the rails.”

A delight for rail enthusiasts, foodies, and armchair travelers alike, Food on the Move serves up the culinary history of these famous journeys on five continents, from the earliest days of rail travel to the present. Chapters invite us to table for the haute cuisine of the elegant dining carriages on the Orient Express; the classic American feast of steak-and-eggs on the Santa Fe Super Chief; and home-cooked regional foods along the Trans-Siberian tracks. We eat our way across Canada’s vast interior and Australia’s spectacular and colorful Outback; grab an infamous “British railway sandwich” to munch on the Flying Scotsman; snack on spicy samosas on the Darjeeling Himalayan Toy Train; dine at high speed on Japan’s bullet train, the Shinkansen; and sip South African wines in a Blue Train—a luxury lounge-car featuring windows of glass fused with gold dust.

Written by eight authors who have traveled on those legendary lines, these chapters include recipes from the dining cars and station eateries, taken from historical menus and contributed by contemporary chefs, as well as a bounty of illustrations. A toothsome commingling of dinner triangles and train whistles, this collection is a veritable feast of meals on the move.

“I am of course far from the first to find trains uniquely pleasant or productive. Food on the Move, a new collection of essays by various writers, describes dining by rail—in an exalted past and, in the book’s tantalizing narratives, sometimes today—as an experience as exhilarating and varied as watching the scenery unfold mile by mile. . . . The visions laid out in this book of the glory days of the Orient Express, the grandest and most local cuisine-oriented of the trains surveyed here, or of the Darjeeling Himalayan Railway, on which bearers would telegraph orders to  a railway kitchen down the line for hot delivery at the next stop, make my celebrations over the appearance of a new snack packet in the Amtrak cafe car seem particularly paltry.”

“Hudgins and seven other writers recount the glory days of train travel, specifically focusing on the cuisine that travelers used to partake of en route. It wasn't just the presence of cloth napkins, fine china, and real silverware that made the trip special; thought and care also went into crafting menus and selecting fine wine. Behind the scenes, chefs contended with the logistics of butchering meat (on board!) and keeping food cold, while the waitstaff made travelers feel like honored guests. Yes, once upon a time, it really was just like in the movies. Hudgins and her crew cover the globe from Japan's bullet train to the famed Orient Express to British Railways' Flying Scotsman. Even the United States, Canada, and Australia all once had train lines that knew how to ‘put on a spread.’ Readers will appreciate all of the research that shines in each chapter, but included photographs and recipes are sure to whet many a nostalgic appetite for a slower, more gentle, more genteel way of life and travel.”

"Hudgins and her contributors supply many arresting historical details. . . . The accounts are thorough and come right up to date. . . . The book is lavishly illustrated and recipes are supplied."

"Describes legendary journeys on five continents, while taking a deep dive into the history of trains and the pleasures of food enjoyed on them. . . . A professor and prolific food writer, [Hudgins is] perfectly placed to understand and explain the joys and limitations of meals on the move. . . . The contributors to Food on the Move—having enjoyed culinary delights and that familiar clackety-clack from Australia’s Ghan to the Orient Express and Trans-Siberian Railway—remind us a better way really does still exist."

"This book is all about the food enjoyed (or not) on rail journeys across the world, some perhaps more well known than others. . . . Whether you’re a seasoned traveler yourself or more of the armchair variety you can’t help be entranced by this book."

“Food and trains, my twin passions, are brought together brilliantly in this guided tour of the symbiotic relationship between railways and eating. Whether it is a simple aloo dum enjoyed in the hill town of Darjeeling, caviar on the Trans-Siberian  or a feast on Orient Express, this book makes you want to go on every journey and eat every meal described in it."

Christian Wolmar, author of Engines of the Raj: How the Steam Age Transformed India