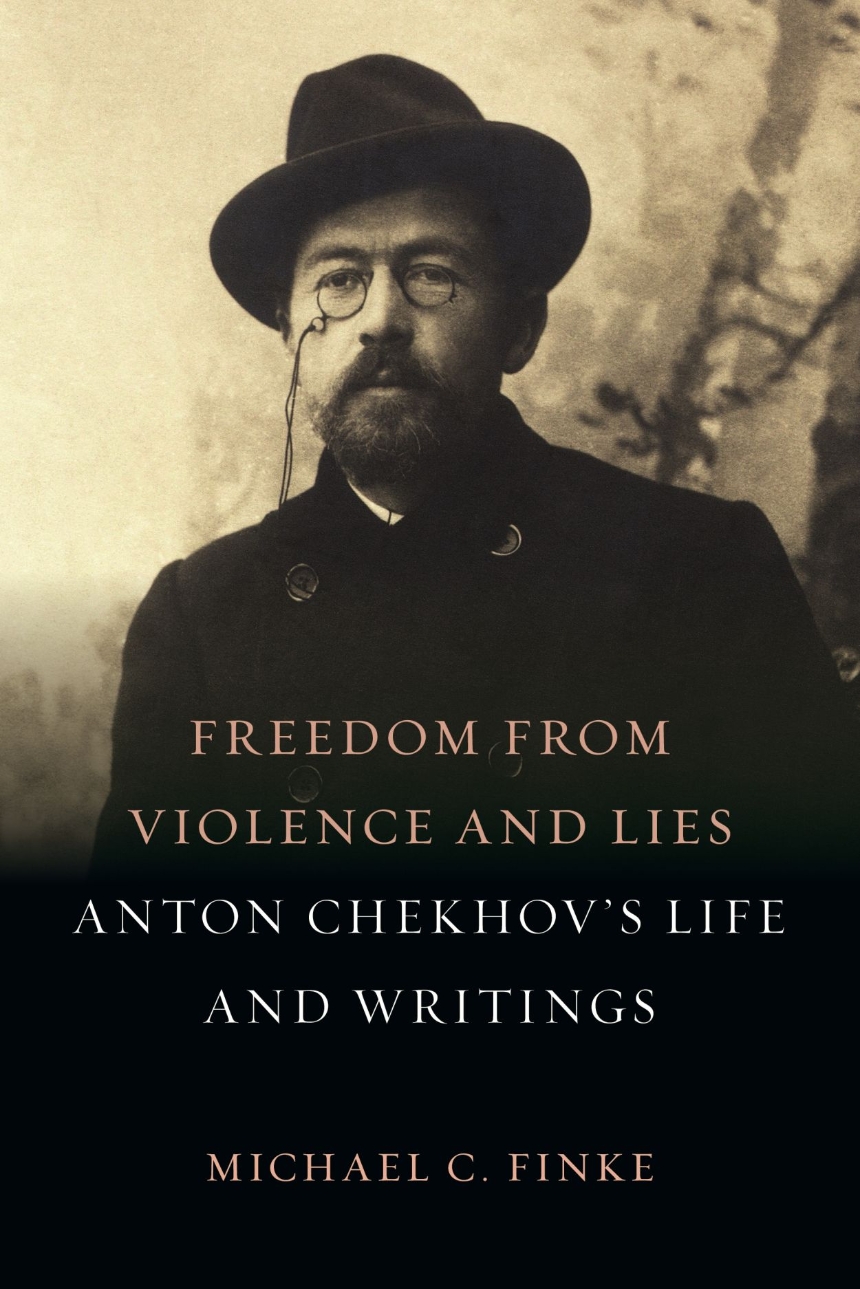 Freedom from Violence and Lies

Freedom from Violence and Lies

An enlightening, nuanced, and accessible introduction to the life and work of one of the greatest writers of short fiction in history.

Anton Chekhov’s stories and plays endure, far beyond the Russian context, as outstanding modern literary models. In a brief, remarkable life, Chekhov rose from lower-class, provincial roots to become a physician, leading writer, and philanthropist, all in the face of a progressive fatal disease. In this new biography, Michael C. Finke analyzes Chekhov’s major stories, plays, and nonfiction in the context of his life, both fleshing out the key features of Chekhov’s poetics of prose and drama and revealing key continuities across genres, as well as between his lesser-studied early writings and the later works. An excellent resource for readers new to Chekhov, this book also presents much original scholarship and is an accessible, comprehensive overview of one of the greatest modern dramatists and writers of short fiction in history.

"Chekhov’s development as a short story writer and dramatist is neatly traced, and Finke offers apt analyses of major works. . . . In the end, readers see Chekhov as an admirable figure struggling to finish The Cherry Orchard while dying, and as a man who gave unstintingly of himself to his family, his friends, the poor, and budding writers. The result is a solid starting point for those less familiar with Chekhov."

"Although it would be grossly reductionist to call Finke’s superb new life of Anton Chekhov, Freedom from Violence and Lies, a ‘political biography,’ the book’s title is in fact drawn from what Finke calls the author’s ‘most famous statement about the relationship between politics and literature.’ . . . Whatever one makes of Chekhov's stance on artistic freedom, of his chafing at being pigeonholed, Finke does a marvelous job of threading the theme through the man's life and work. . . . In some 240 pages, Finke limns a nuanced, multidimensional, moving portrait of Chekhov."

" Notable in Finke’s book are his clear and readable style, his balance between recounting Chekhov’s brief life (he died at 44) and analyzing his most notable prose and plays, his emphasis on Chekhov’s distrust of all ideologies, and the significance of Chekhov’s medical and philanthropic activities. . . . Recommended."

"A workmanlike portrait of Chekhov, useful for the general reader curious to learn more about this master of Russian literature..."

“A crown achievement of his life-time engagement with Chekhov, Finke’s concise biography tells a compelling and comprehensive story of the Russian writer’s life and work. Written with surgical precision and creative sensitivity, this highly readable book pulsates with a multitude of insights into Chekhov as a person and an artist. Freedom from Violence and Lies will be a treasure for anyone interested in Russian literature and this great beloved writer.”

Radislav Lapushin, Associate Professor of Russian at the University of North Carolina at Chapel Hill

“This valuable guide to the last great Russian writer of the nineteenth century achieves an exceptional balance between the life and the work. A wealth of biographical detail is harmoniously intertwined with rich analysis of Chekhov’s literary work, abounding with original and perspicacious interpretations. Chekhov’s life is studied in its two parallel streams—those of a writer’s career and of a medical professional. The latter further reveals competing lines of travail: as a practicing doctor, as a philanthropist, and as a student of the history and sociology of health care. The reader will enjoy a charming image of the writer, but also frequent, delicate reflections on the unique problems a scholar of Chekhov encounters, fascinating excavations into the deeper reaches of Chekhov’s work, and subtle commentaries on his poetics. An intellectual endeavor of considerable complexity, Finke’s book will have a distinguished place amidst the vast literature on Chekhov.”

"Finke’s book offers both a superb introduction for the uninitiated and a substantive contribution to the scholarly corpus. . . . His discussions of particular works are nothing short of luminous in analytical depth and insight—and yet, they are invaluable above all in the kind of process they model for approaching Chekhov’s work at large. In this deft movement between part and whole, Finke uncovers productive strategies for juxtaposing and integrating the disparate elements of Chekhov’s textual world, for discerning resonance, forging connections, and letting the music sound. . . . Truly, in every respect, Finke’s treatment of Chekhov’s literary work is a tour de force."

Chekhov was an admirable overachiever when it came to good works. He served and he gave quite out of proportion to his resources. His social engagement was absent of dogmatism or, indeed, conventional ideological commitment of any kind; while this may recommend him well to many readers, in his own highly politicized setting he was often criticized for his putative lack of position. In the mid-1880s, when Chekhov was first becoming known, the important critic A. M. Skabichevsky of the Northern Herald (Severnyi vestnik) asserted that the young writer’s lack of clear ideological grounding and mission would have him ‘die completely forgotten in a ditch’; Chekhov always remembered this. Even as late as 1890, just a few weeks before he was to leave on his journey to the prison island of Sakhalin, Chekhov was listed among the ‘priests of unprincipled writing’ in the important journal Russian Thought (Russkaia myslʹ). In retrospect such rebukes seem unfathomable: anyone familiar with Chekhov’s biography marvels at his evident drive to make an impact, whether through mentoring others with literary aspirations, building schools and a church belltower, stocking public libraries on Sakhalin and in his hometown of Taganrog, providing healthcare to the poor, or landscaping. Chekhov was always planting trees, even when in very temporary locations, and for memoirists and biographers this activity reflects his unselfish wish to make better a future he was unlikely to inhabit. Tubercular the last two decades of his life, Chekhov could expect his years to be shortened by an infection that had plagued his family; the courage with which he faced the certainty of an early death can appear as denial or a psychological enigma, but it facilitated an impactful life.

Chekhov’s intimate relations with illness and death derived also from his training and practice as a physician. At the apex of his literary success, Chekhov was still prone to remarks like the one he made to Stanislavsky by way of comparing himself to Gerhart Hauptmann: ‘Listen, I’m not a playwright at all, I’m a doctor.’ As biographer Mikhail Gromov put it, ‘Chekhov would never have said: “I’m a good writer.” But he said many times: “I’m a good doctor.”’ Physicians in turn have always responded to Chekhov. During his lifetime, while the 1902 Pirogov Medical Congress was under way in Moscow, the Moscow Art Theatre staged a special performance of Chekhov’s play Uncle Vanya (Diadia Vania), which features a physician character. Attendants celebrated Chekhov with a procession featuring a life-sized reproduction of his portrait by Osip Braz, and Chekhov was bombarded with appreciative telegrams from his medical colleagues. There are many articles and books on Chekhov by admiring physicians who have been moved to try their hands at literary scholarship, and his works often feature in courses of medical humanities in medical schools. Memoirists who knew Chekhov and scholars of his work since have often associated Chekhov’s powers of observation with his training as a physician.

Chekhov’s dual career was made possible by a remarkable capacity for work. The most comprehensive academic edition of Chekhov’s writings includes more than 580 published works that might be classified as prose fiction, though scholars vary in just what they count. A short fake letter to the editor or a letter of denunciation? (I do count these as discrete works.) The caption to a cartoon drawn by his brother Nikolai or another graphics artist? (These I do not count.) Moreover, some items that occur once in that edition’s table of contents were published multiple times in different variants, whereas other items were recast and retitled and therefore appear multiple times.