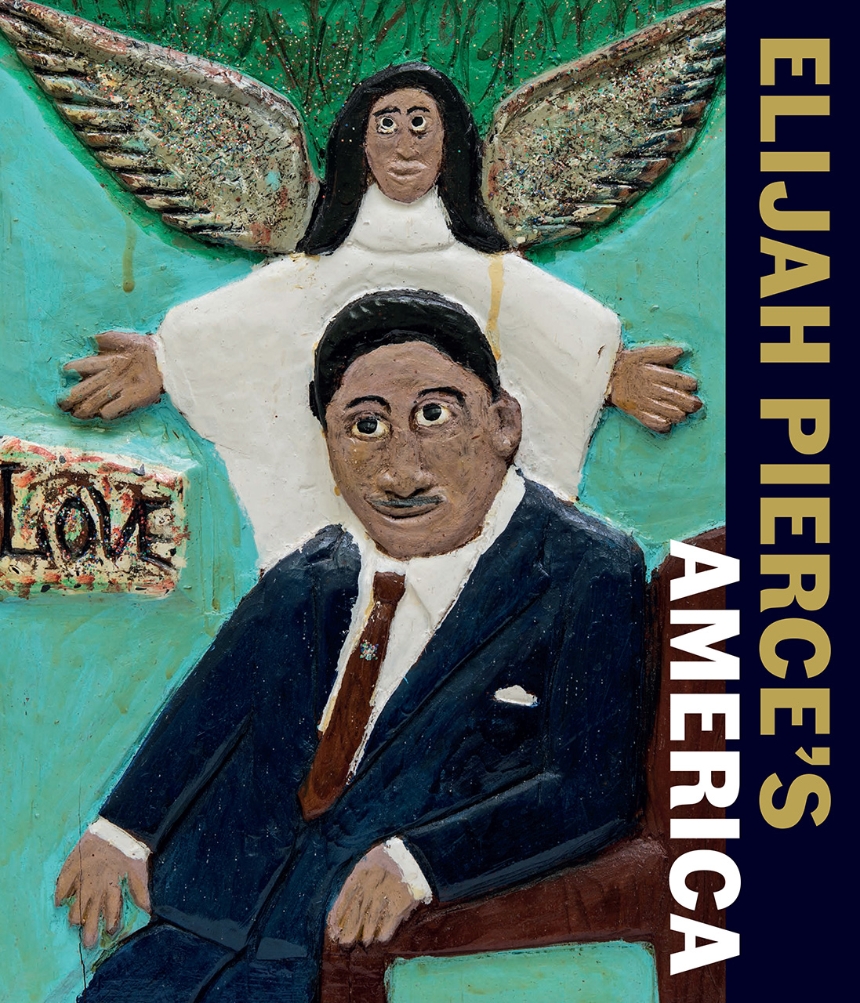 Elijah Pierce (1892–1984) was born the youngest son of a former slave on a Mississippi farm. He began carving at an early age when his father gave him his first pocketknife, and throughout his life he honed his craft and created artworks that would eventually, in the 1970s, bring him national and then international fame. Elijah Pierce’s America seeks to revisit the artist’s oeuvre and see it in its own right, rather than as “naïve,” as it was known at the time.

Through his carvings, Pierce tells his own life story, but he also chronicles the African American experience. He made his living as a barber and was also a qualified preacher; just as his barbershop was a place for gossip and meeting, so his art reflects his own and his community’s concerns. His subjects ranged from politics to religion, but he seldom distinguished the race of his figures—he thought of them as everyman figures. His secular carvings show his love of baseball, boxing, comics, and movies, and reflect his appreciation for American heroes who fought for justice and liberty.

A critic summarized what Elijah Pierce’s America foregrounds in Pierce’s artwork: “He reduces what he wants to say to the simplest forms and compositions. They are decorative, direct, bold, and amusing. He uses glitter and all kinds of devices to make his message clear. It gives his work an immediacy that’s very appealing.” Accompanying a major exhibition at the Barnes Foundation in Philadelphia, Elijah Pierce’s America shines a light on the sophisticated work of an artist with a distinct and important voice.

"A significant new contribution to the understanding of this artist."

"It offers a near-complete portrayal of twentieth-century American history through the eyes of one man, the artist Elijah Pierce. That Pierce was a Black American makes his vision of the times he lived especially distinctive and powerful."

"[Pierce's] wood carvings—elaborate, detailed, and painted—speak to American political and cultural history. . . . Previously presented in museums in the context of folk or self-taught art, this show and catalog reconsider his work in relation to mainstream art histories."

"While [Pierce's] art could encompass whimsical animals, religious themes and an unalloyed pride in America, much of it was steeped in slavery and the struggle for black emancipation. . . . There have been few moments in American history when themes of race have not been pressing, one of several reasons why Pierce's richly authored work retains such vivid, relatable and persuasive power."

"Witness the celebration of a remarkable, self-taught woodcarver."

"The Herculean task to assemble a near-complete chronicle of Pierce's oeuvre from various public institutions and private collections in a little over a year was a remarkable feat. . . . The Barnes Foundation is to be commended for this critical reconsideration of Elijah Pierce's life's work. The catalog essayists' perspectives, coupled with the hindsight time brings and juxtaposed with the current refocus on social justice, make this an ideal moment to revisit the artist and his work. Elijah Pierce's artistic contributions to American life, and the strength of his uplifting voice, will inspire another generation. Having . . . a long-lasting historical document in the form of a beautifully designed comprehensive catalog is a testament to the Barnes Foundation's commitment to its mission, vision, and values."