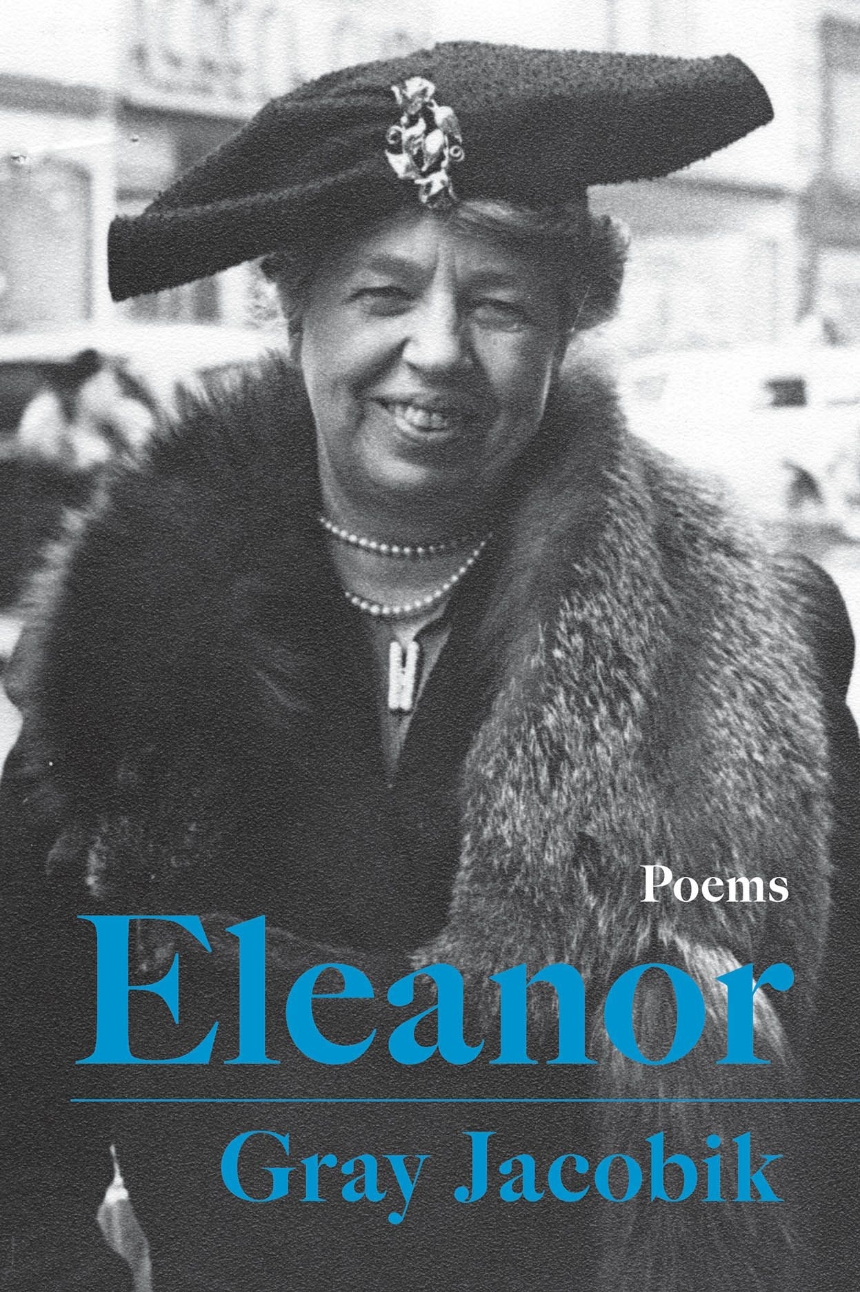 In Eleanor, Gray Jacobik presents sixty-two poems written in the voice of former first lady Eleanor Roosevelt. Set against the backdrop of many of the major national and international events of the twentieth century, this famous historical figure has much to say. This collection includes poems about Eleanor’s husband Franklin, her children, her mother-in-law, her intellectual mentors, and her most passionate and intimate friendships. Other poems focus on Eleanor’s evolving relationship to servants, issues of class and human rights, as well as her service to the world community. Jacobik’s monologues constitute a sustained imaginative work that embodies Eleanor Roosevelt’s emotional experience, moral conflicts, fears, losses, desires, and aspirations.

Eleanor Roosevelt was a bold and outspoken advocate for issues that are still relevant today: social justice, economic security, freedom from war and violence, and the rights of workers and immigrants. Modern readers will find much to admire, and much that resonates, in the themes of this collection. Publishing one hundred years after the Nineteenth Amendment granted women the right to vote, this collection reminds us how far we have come, and how much further we have yet to go.

"A new book by Gray Jacobik is always cause for rejoicing. And this one even more so, since, as of this moment, six women are running for US President. These poems in Eleanor Roosevelt's voice draw us into her story; the difficult mother-in-law, the impossible expectations, the marriage that succeeded only through private accommodations. . . . Jacobik helps us see and feel the journey that led Eleanor to become the compassionate leader we remember: 'Oh, I took back from him years ago / my vulnerability, sealed myself like a housewife / seals her preserves with paraffin.'  This is how she survived. And thrived. Roosevelt pondered: 'What good is / history . . . if no one ever learns?'—words for our troubled times. And we, contemporary readers of poetry, can learn, and learn again, the powerful lessons of this moving and courageous book. Brava Gray Jacobik, for writing these poems, and for writing them so brilliantly."

Barbara Crooker, author of "The Book of Kells" and "Some Glad Mornings"

"Eleanor Roosevelt is the woman we need to hear right now—and the voice of poet Gray Jacobik puts a rose inside Roosevelt's ever cogent, necessary thoughts, right in time for the 100th anniversary of the vote for women."

Molly Peacock, author of "The Analyst: Poems" and "The Paper Garden: Mrs. Delany Begins Her Life's Work at 72"

"This page-turning book of persona poems has the remarkable effect of bringing together the public and private lives of a woman for whom the two were carefully kept apart. Though grounded in extensive research, the book is, as Jacobik says, 'an act of literary imagination'—one that brings its subject brilliantly to life through a thoroughly realized voice that makes us feel as if we’re being spoken to in confidence."

"Gray Jacobik has imagined for us a vivid lyric voice belonging to the mind of Eleanor Roosevelt. It is the voice of the private self, brimming with innermost desires, fears, angers, guilts, aspirations, loves. This voice provides a safe harbor, a place where she can unapologetically be herself, but it is also a voice that steadily records the growth of an evolving, complicated human being. Circumscribed by a multitude of inherited ideas about the duties of her gender, marriage, and class, Eleanor Roosevelt nonetheless forged for herself a soul and life that she could indeed call her own. With their etched clarity, these lyric poems tell that story, one that underpins and illuminates from within all we know about one of the great women of any century."

I was born Anna Eleanor Roosevelt

The first servant I remember
Our laundress at Tivoli was quite Madeleine’s
A nurse who attended my children, Blanche
To his lasting humiliation, my Grandfather Roosevelt
I was married before I was told that a maid,
I cannot now remember the name
When Franklin was appointed
When one has servants, you never forget
Sometimes from a train or car window

The education I received
Here was Mademoiselle Souvestre: her brilliant talk

Brilliant blue-sky days and deep green pines
If I was going to inspect institutions
I was at war with myself for the visions of Earl’s
Earl touched my body
Franklin would succeed in the election
Earl’s love forced me to overcome the barrier
Earl and I were Lady and Knight Errant
She’s all yours, Hickok. Have fun!
Hick was glorious company and now
Ares sent The Depression then War; Eros, Passion
Years later, when Lorena and I would take
During the 1932 campaign, although Hick ought not
Sometimes, beside David on a plane or in a car
Once, in 1948, David and I had two days in Zurich
Before I bore six children, I cut quite the figure
The truth is never wholly palatable: David is
Should Fate ever permit me to choose just one

I have known only a few very happy marriages
When I think of those months
As we were leaving Albany to fly to Chicago
Visible from the small window of the plane
Political expediency and gallant affability
I was in California and could not attend Marian
Painful for me, at times to be so delicately
That frightful clanging––
In 1939, when the S.S. Saint Louis
I’d cringe inwardly when I’d hear Franklin
Slowly, along the eight hundred miles

After The White House

Who was I if not Franklin’s
The fate of war refugees was an issue I cared
Once, when I chaired the Commission
Hollywood made a movie about Fala, and he was
Aboard the Tuscaloosa once in the West Indies,
Finding myself First Lady of the State
I turn over the word horror
When I was a young girl

When I look back over my life