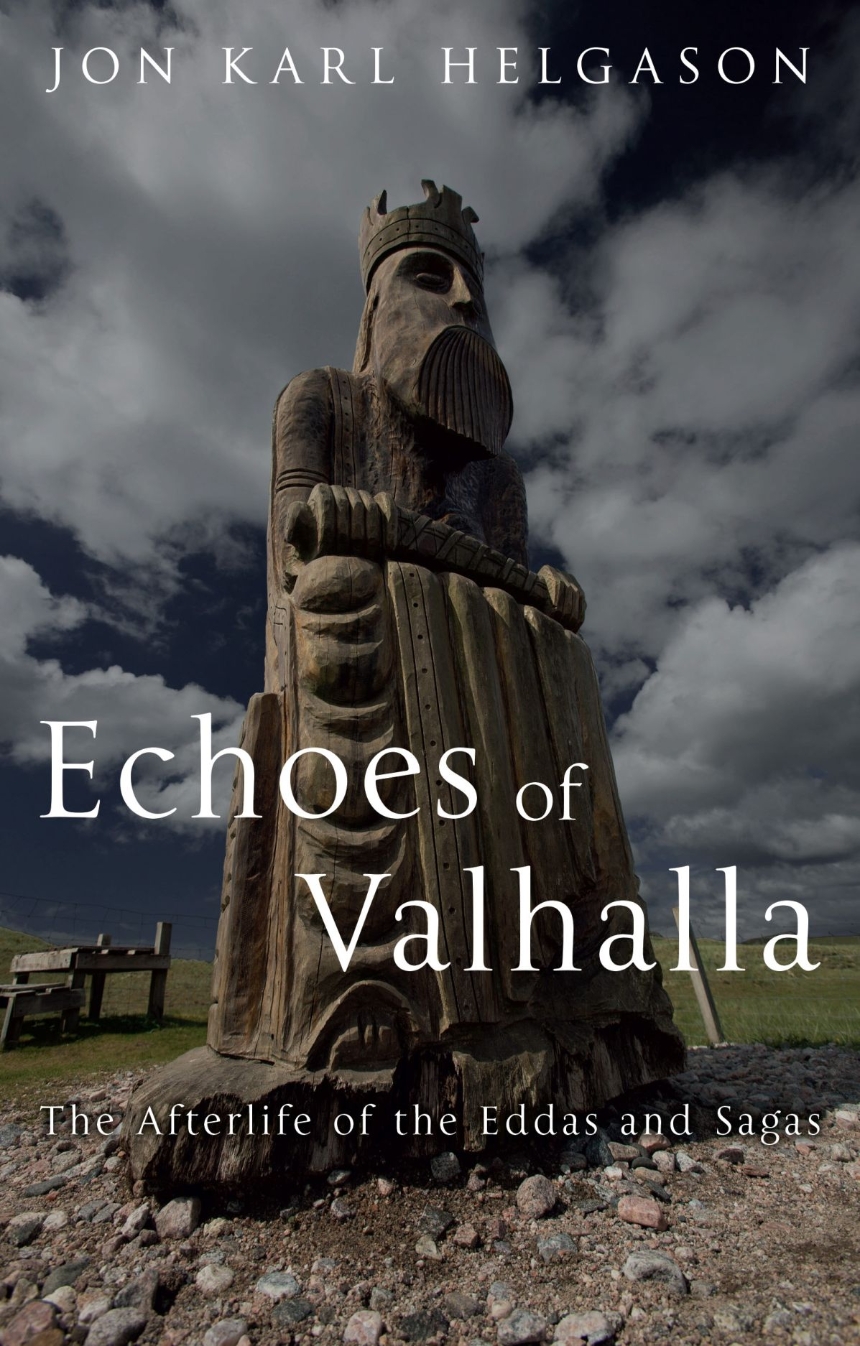 The Afterlife of the Eddas and Sagas

The Afterlife of the Eddas and Sagas

Translated by Jane Appleton
Tolkien’s wizard Gandalf, Wagner’s Valkyrie Brünnhilde, Marvel’s superhero the Mighty Thor, the warrior heading for Valhalla in Led Zeppelin’s “Immigrant Song,” and Donald Crisp’s portrayal of Leif Eriksson in the classic film The Viking—these are just a few examples of how Icelandic medieval literature has shaped human imagination during the past 150 years. Echoes of Valhalla is a unique look at modern adaptations of the Icelandic eddas (poems of Norse mythology) and sagas (ancient prose accounts of Viking history, voyages, and battles) across an astonishing breadth of art forms.

Jón Karl Helgason looks at comic books, plays, travel books, music, and films in order to explore the reincarnations of a range of legendary characters, from the Nordic gods Thor and Odin to the saga characters Hallgerd Long-legs, Gunnar of Hlidarendi, and Leif the Lucky. Roaming the globe, Helgason unearths echoes of Nordic lore in Scandinavia, Britain, America, Germany, Italy, and Japan. He examines the comic work of Jack Kirby and cartoon work of Peter Madsen; reads the plays of Henrik Ibsen and Gordon Bottomley; engages thought travelogues by Frederick Metcalfe and Poul Vad; listens to the music of Richard Wagner, Edward Elgar, and the metal band Manowar; and watches films by directors such as Roy William Neill and Richard Fleischer, outlining the presence of the eddas and sagas in these nineteenth- and twentieth-century works.

Altogether, Echoes of Valhalla tells the remarkable story of how disparate, age-old poetry and prose originally recorded in remote areas of medieval Iceland have come to be a part of our shared cultural experience today—how Nordic gods and saga heroes have survived and how their colorful cast of characters and adventures they went on are as vibrant as ever.

“Helgason follows the trail of 12th-century Icelandic literature and Norse gods, heroes, and heroines like Gunnar, Hallgerður, and Leifur Eiriksson as they appear in contemporary books, comics, plays, films, and even videogames. . . . His study will please readers thoroughly familiar with the saga characters and edda poems in their original appearance in Icelandic medieval literature. While some purists may resent the modern transformations of these sources, Helgason sees the constant adaptation not so much as a destruction of the original versions, but more as a signal to readers to consult the source, stating that the contemporary adaptations ‘are instrumental in promoting the eddas and sagas internationally.’”

"Succinct, engaging, and insightful, this book is an excellent supplement to collections on the topic. Recommended for both general interest readers and scholars."

"The content and quality of the writing make Echoes of Valhalla a quick and enjoyable read and well worth the reader’s time. Helgason’s ability to present a great deal of detail in very brief descriptions allows him to focus on the overlap and evolution of ideas over time and across media in a manner that is creative and entertaining."

“In Echoes of Valhalla Jón Karl Helgason takes the reader on a fascinating journey through the myriad forms that hark back to the literature of medieval Iceland, with discoveries at every turn. . . .Weaving in the less familiar with the well-known—Wagner, Tolkien, and Thor movies—Jón Karl’s learned and witty commentary will engage readers as he explores the remarkable influence of medieval Icelandic mythology and sagas on the many works that construct and reconstruct our cultural memory.”

“Echoes of Valhalla effectively underlines the ways in which many of our favorite modern narratives are interwoven with enduring ancient Nordic threads.”

"This is a highly entertaining study of how the Old Norse sagas and myths have been reinvented and adapted in comic books, plays, music, and films. Highlights include a discussion of Led Zeppelin’s Immigrant Song and the development of the subgenre Viking metal (strains of which can sometimes be heard coming from my office door when I’m in need of inspiration)."

"Helgason’s study will please readers thoroughly familiar with the saga characters and edda poems in their original appearance in Icelandic medieval literature. While some purists may resent the modern transformations of these sources, Helgason sees the constant adaptation not so much as a destruction of the original versions, but more as a signal to readers to consult the source. . . . This reader puts the book down not with disdain for the distortions of the old stories, but rather with gratitude for their 'afterlife,' including in comic book form, as a reminder of a great medieval literary tradition."