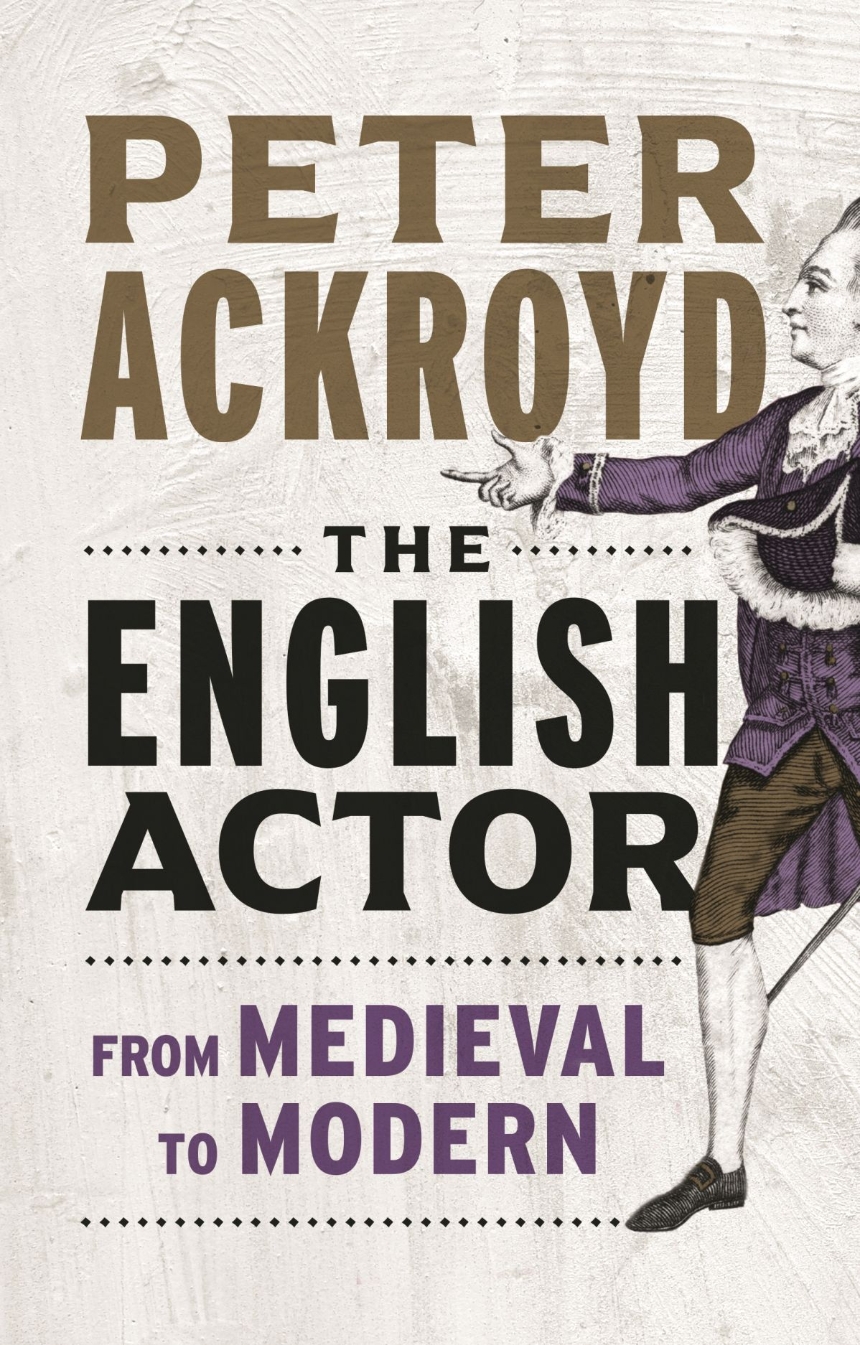 From Medieval to Modern

From Medieval to Modern

From a leading historian and writer, a delightful exploration of the great English tradition of treading the boards.

The English Actor charts the uniquely English approach to stagecraft, from the medieval period to the present day. In thirty chapters, Peter Ackroyd describes, with superb narrative skill, the genesis of acting—deriving from the Church tradition of Mystery Plays—through the flourishing of the craft in the Renaissance, to modern methods following the advent of film and television. Across centuries and media, The English Actor also explores the biographies of the most notable and celebrated British actors. From the first woman actor on the English stage, Margaret Hughes, who played Desdemona in 1660; to luminaries like Laurence Olivier, Peter O’Toole, Maggie Smith, Judi Dench, and Helen Mirren; to contemporary multihyphenates like Gary Oldman, Kenneth Branagh, Sophie Okonedo, and Chiwetel Ejiofor, Ackroyd gives all fans of the theater an original and superbly entertaining appraisal of how actors have acted, how audiences have responded, and what we mean by the magic of the stage.

“Bright ghosts of performances past haunt these pages, electric ephemera conjured from the shadows of history, and it's impossible not to feel some of the shivers they originally inspired. Ackroyd generously gives us both the prose and the poetry of great English acting—the craft and commerce that allowed it to happen and the magic that made it mythic.”

"Acting is like sculpting in snow. All the more splendid that Ackroyd has written a book which gives so much life to performances long melted away."

The first English actor, and the first English dramaturge, was a god. It was claimed of Woden, the Mercury of the Anglo Saxons, that he could clothe wooden puppets and give them life. Transformation, and even transcendence, were part of the divine machinery of the drama. This world was moreover a haunted one, shimmering with intimations of ghosts and shadows, with things that should not be. Despite temporary tremors in fashion, magic has always lain at the heart of English acting, whether magic felt or magic offered. When that most mage-like of actors, Ralph Richardson, recalled seeing Frank Benson dragging his sword across the ground as Hamlet, seeking perhaps to cut a path for his dead father, he remembered thinking that it represented ‘pure magic! My God, if I could be an actor.’ Fittingly, Richardson’s own acting was often described as magical or wizard-like.

For many, acting began in storytelling. And we may note how one role that survived the transition from a pagan England to a Christian nation was that of the scop, the bard of the English kings and nobles. He was as much actor as writer. But the actor does not want to compose a story, but rather to make one live. In one interview, Juliet Stevenson spoke of the storyteller offering an echo chamber of common experience. This perfectly defines one lung of the process. The other, less well known, is that which breathes the air of foreign lands, of unseen shores and of the quite alien.
The English actor has always striven to bind the two, sometimes contending, imperatives of the familiar and the far away.

Richardson, in common with many English actors, had felt the allure of other arts. He had wanted to be a painter. Realizing that he lacked the skill, he nursed the hope that ‘one day I could “illustrate literature”.’ This is the glory and perhaps limitation of the native approach. The text is the English actor’s guide and master in a way that still seems strange to his or her Continental counterparts, and it is impossible to consider the English actor without reference to the English play. ‘My springboard is always the script,’ said John Hurt. As a result, the English actor tends to savour and taste the words, not disguise them or replace them with his or her own. Improvisation, although often employed in training, is in origin a Continental practice. The written word lies at the heart of the English drama and therefore at the centre of the English actor’s craft, in the pauses of Pinter as much as in the verbosity of Ben Jonson. It is not, then, surprising to learn that, for many centuries, the English actor was more orator than dancer. The body was never neglected – fitness, vocal flexibility and the arts of dance and fencing were all considered vital – but, compared with that of other cultures, it was rarely central to the English actor’s art.
(…)
Habitually, at least, the English actor tends to stress the element of control – control of self and control of the audience. The most constant, if fractious, relationship has been with the audience and constant labour is needed to tame it. Edith Evans, peering hard at students at Royal Central School with her familiar emphasis (for it was not really intensity), put the matter beyond doubt. ‘You must govern the audience,’ she said. ‘You must never let the audience run away with the play . . . I always listen at the side to know what they’re up to . . . You’ve got to be able to manage a lot of human beings.’ Simon Callow, too, has warned of the danger of the audience ‘directing’ the play. The result is a performance weakened and impoverished.
The English actor is innately suspicious of what Callow has called ‘directocracy’. In other words, the English actor does not like to be told what to do. This must be qualified: particularly in rep, many actors can be strikingly passive in relation to the director. But it remains true that the auteur tradition, where the director is the actor’s tutor and the playwright’s master, has yet to put down native roots.
(…)
It is not reductive or glib to suggest that while drama school gives you a bag of tools, repertory gives you a box of tricks. Drama school exists to turn performers into actors, and in that process mannerism is an inevitable casualty. In rep, mannerism can be a virtue. On the other hand, rep offered, unambiguously, a training. You emerged toughened, speedy, adaptable, unsentimental about your own abilities, considerate and, above all, versatile. John Perry, assistant head of drama at the Arts Educational Schools, observed tersely that rep was ‘a good antidote to places like this’. As we are beginning to see, the dramatic demands of the twentieth century were different. It would no longer be enough to get a clap or a laugh from the audience; the business now was to steal its heart.

In the pages that follow, the English actor emerges as mage, as fool, as prophet, as activist, as worldling and as simple entertainer. Yet it is never quite simply entertainment; some nimbus will always cling to this art, ennobling the frivolous and humanizing the epic. A note must be added on the scope of this study. It includes certain actors who were born outside England but within the British Isles; they include some who learned their trade or fashioned their style on the English stage, as well as those who found distinction and even identity upon it.