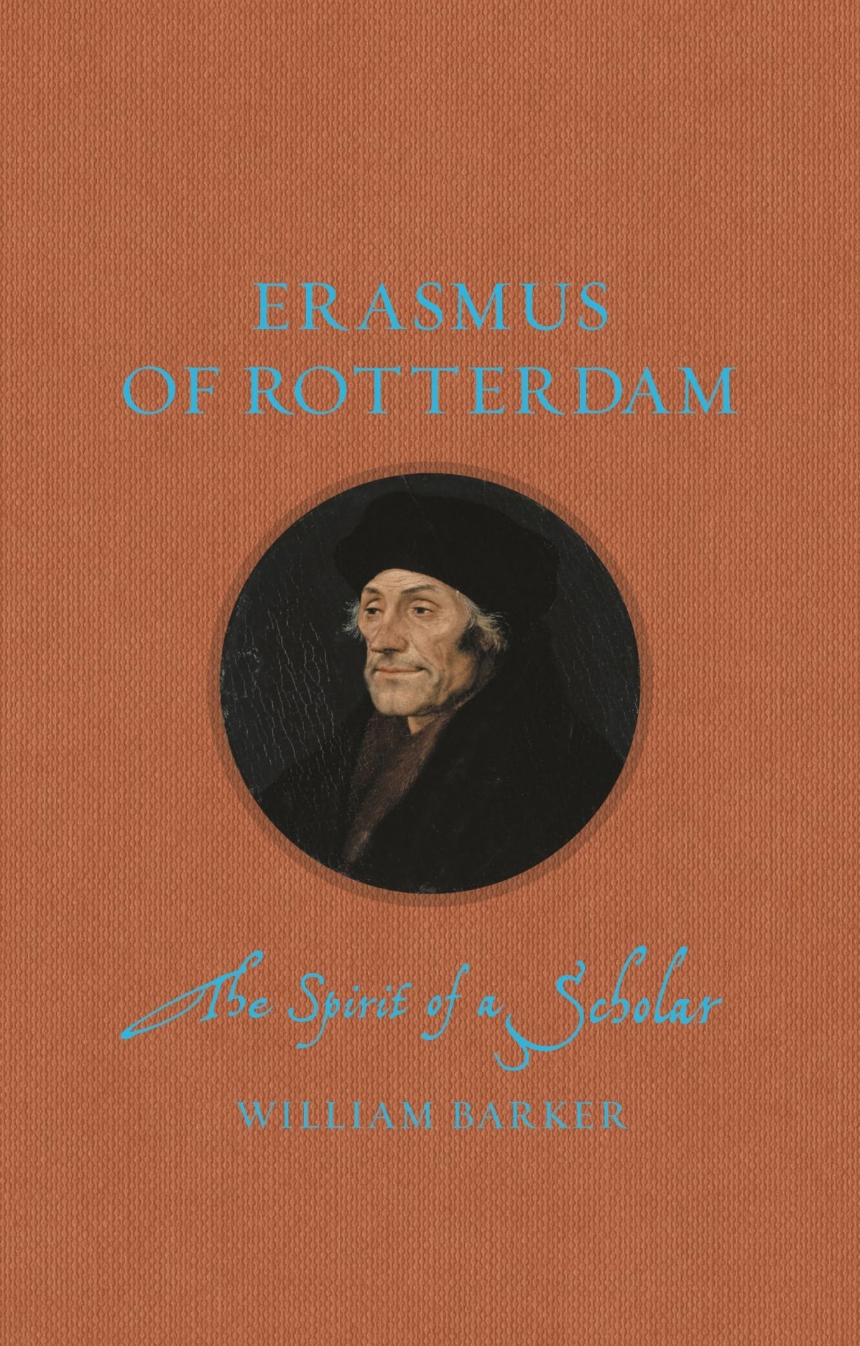 The Spirit of a Scholar

The Spirit of a Scholar

Erasmus of Rotterdam came from an obscure background but, through remarkable perseverance, skill, and independent vision, became a powerful and controversial intellectual figure in Europe in the early sixteenth century. He was known for his vigorous opposition to war, intolerance, and hypocrisy, and at the same time for irony and subtlety that could confuse his friends as well as his opponents. His ideas about language, society, scholarship, and religion influenced the rise of the Reformation and had a huge impact on the humanities, and that influence continues today. This book shows how an independent textual scholar was able, by the power of the printing press and his wits, to attain both fame and notoriety. Drawing on the immense wealth of recent scholarship devoted to Erasmus, Erasmus of Rotterdam is the first English-language popular biography of this crucial thinker in twenty years.

"Writing with clarity and fluidity, Barker delineates the multiple aspects of the life of this prince of scholars in the context of the political, cultural, theological, and humanistic currents characteristic of the 16th century, offering an engaging introduction to the life and accomplishments of Erasmus. . . . A significant contribution to the corpus of Erasmian scholarship, this volume affords readers access to the scholarly spirit and mindset of a complicated personality, a man thoroughly immersed in the intellectual conflicts of his time. . . . Highly recommended."

"The Renaissance Lives series, published by Reaktion books and which already includes several dozen titles, is enriched by this biography of Erasmus of Rotterdam (1466–1536), a wonderful introduction to a classic figure and literary work, not only for scholars and those interested in the historical period, but for all those who might have fallen out of the wise habit of reading and studying."

"This book is a gem. It follows Erasmus, the great Renaissance humanist, through a life full of travel, comity, controversy, and scholarship. Barker offers expert distillations of Erasmus’s wide-ranging works and a judicious selection of examples, references, and images. We learn about the many ingredients of Erasmus’s success as a scholar, including his personality traits and intellectual commitments, and his patrons, friends, and helpers."

"An engaging and very readable popular biography, at times amusing, with insights into the relation of the humanities in Erasmus’s time to our own."

During his life Erasmus wrote thousands of letters to hundreds of correspondents. In the beginning the recipients were his family and a small circle of friends, but as he became older the correspondence broadened first to other humanists, and then to important figures in the Church and in Europe’s political realm. By 1515, when he was 49 years old and had become famous for works like the Adages, his collection of proverbs, and his satire The Praise of Folly, he began to gather his letters together for publication. His many published collections of these letters became widely read and brought Erasmus into an intimate relation with many readers. His letters told the details of his life (tales about a fall off a horse and a bout of dysentery, for example), they presented his controversial ideas on politics and religion, and they gave readers an inside look into the world of humanist scholars and their powerful patrons. There are flashes of anger, pages of moral musing or instruction, self-justification and humorous anecdotes. All this writing on such disparate topics has an extraordinary effect. We get to know Erasmus in the same way that we know the ancient writers Cicero or Pliny the Younger. Through their letters, we sense their living presence. Of course, by virtue of his composing and later careful curating of his letters, readers came to know Erasmus as Erasmus wished to be known. What follows is the story he has decided to tell us about his early years.

Erasmus was born in Rotterdam, then a small town in Holland, part of the Burgundian Empire, on the night of 27–28 October 1466. His father, Gerard (we now know his last name was Heyle), was a priest who had also worked as a scribe and had once lived in Italy. His mother, Margaret Roger, was the daughter of a physician from Zevenbergen, some 50 kilometres (30 mi.) from Rotterdam. His name was simply Erasmus; he was not given his father’s name because as the son of a priest he was considered illegitimate (it was only when he was 34 years of age that he publicly named himself ‘Desyderius Herasmus Roterodamus’). Erasmus had a brother named Pieter, who was three years older. When Erasmus was still very young, the family settled in Gouda in northern Brabant, a long day’s walk from Rotterdam. By the age of four he was in school. When he was eleven, in 1478, he and Pieter were taken by their mother to St Lebuin’s School in Deventer (also in Brabant), some 120 kilometres (75 mi.) west of Gouda.3 This was an unusual move, a sign of the parents’ commitment to the education of their boys, for the school at Deventer was already known as a superior institution.

Late medieval schools like St Lebuin’s were intended to immerse students in Latin, a language that was only heard in church or in the classroom. The child would come in off the street speaking a variant of Middle Dutch and would enter the foreign world of Latin. The whole point of the technical side of the education was to get the student to read and write and speak the language. The instruction was based on memorization and rote, but over time students would begin to use it as a living, spoken language, though only within certain contexts with others who had received similar instruction. Many students must have struggled. To get the students sufficiently instructed, the teachers resorted to traditional classroom motivators – praise, humiliation, psychological fear and physical punishment. Because the schools were closely tied to the Church (priesthood was the common vocational aim), there was a heavy emphasis on prayer and moral behaviour, an important part of the curriculum. In the later years of their education, the boys would be introduced to philosophical texts that would lead to studies in theology. Even the literary texts were subject to a kind of ethical interpretation that would conform to a religious training. Some of Erasmus’s moral and religious education may have come from teachers who belonged to the popular lay movement the Brothers of the Common Life, which promoted a distinctly personal piety that was emphasized in the houses in which the students boarded. Erasmus’s ideas of personal piety show the influence of this movement, even though he was never (like Thomas à Kempis, c. 1380–1471) a follower of the Brothers.

During the years in Deventer Erasmus learned to read, write and speak Latin effectively, and may also have had some kind of elementary encounter with Greek. Though his studies by his own account were tied to the older medieval textbooks, it was at Deventer that he also had some form of contact with the new curriculum of Renaissance humanism that had already begun its travel northwards from Italy. These studies rejected the medieval schoolbooks, and encouraged direct contact with the great writers of ancient Rome (and, increasingly, Greece). By his own account Erasmus was an indifferent classroom student, but he claimed that ‘a secret natural force [occulta naturae vis] swept me into liberal studies’ – to the prose of Cicero, the poetry of Virgil and Horace, the plays of Terence, and the joys of erudition. This was the beginning of a life dedicated to the study of texts and language.

His feeling for ancient literature may have seemed to him to have sprung up spontaneously as a mysterious or hidden force, yet such interests do not arise in total isolation. Erasmus’s interest may have come in part from his father, who had lived in Italy and who as a scribe had copied out some of the great classical writings, or perhaps it was a master in his school who urged him along. Erasmus certainly befriended like-minded fellow students who were also drawn to ancient literature. He found much of his schooling to be a trial, as it can be for any child who knows he or she is brighter or more impassioned than the teachers, and his later essays on education should be read with his youthful disappointment in mind, as well as his evident precocity for learning outside the regular classroom. At the end of his schooling, he fell under the spell of Alexander Hegius, who became a famous teacher of humanities at Deventer, and he also claims to have seen (but not met) Rudolphus Agricola, the most learned northerner of the older generation, who visited the school. Agricola’s work would prove transformative in the trans-European shift from scholastic philosophy to a literary culture.

By the time Erasmus was about sixteen years old, he had, certainly in his own mind, become a scholar. He was old enough to attend university, which for some students began as early as fourteen. At this essential moment, his mother died from the plague. The boys moved back to Gouda, and their father died from the plague soon afterwards. The death of both parents must have been a catastrophic event for Erasmus. Strangely, he never expressed any pain at the loss of his parents in his later accounts of the extraordinary change he underwent in this moment of his life. What did afflict him was falling under the control of three unsupportive guardians, one of whom was a relative who had taught him years earlier in Gouda.

The two boys, now orphaned, wanted to study in a university, but the guardians sent them to learn and work in a lay community in ’s-Hertogenbosch, another small but prosperous town nearby, to the southwest of Gouda (the artist Hieronymus Bosch was then living in the city, whose name he had adopted as his own). Erasmus and his brother moved there in 1484, no longer advancing in their studies as they had at Deventer but apparently serving as assistant teachers in a school associated with the pietistic Brothers of the Common Life. The boys and their guardians engaged in an intense discussion over their future. There was no money, so there were few options. For scholars with no other prospects, the Church was the inevitable place for employment. Pieter opted to join a monastery. Soon after Erasmus also joined a monastery, of Augustinian canon regulars, in Steyn, a short walk from Gouda. He took his vows as a noviciate perhaps in 1487. In later life he expressed massive regret over his decision to become a cloistered Augustinian canon, and even after some twenty years he was still angry at his brother, his guardian, the canons at the monastery, and (to a lesser degree) himself for taking these vows. But the idea of the cloistered life had been seductive, because he was told he would have leisure time to pursue the humanistic studies that by then had come to be so important to him. Some six years later he was able to leave the monastery, even though he remained under the requirement to wear the habit and to report back regularly to his order.