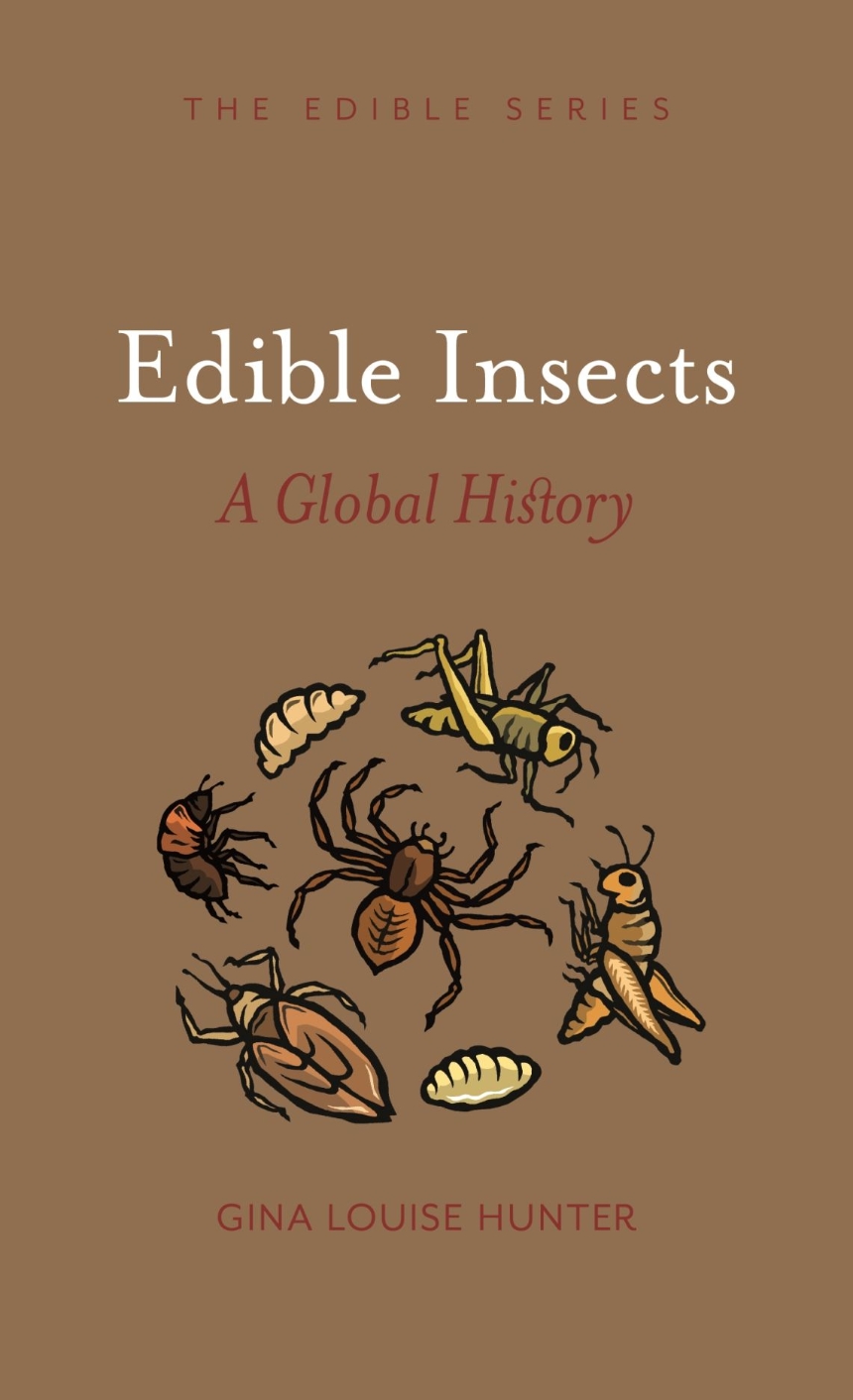 From grasshoppers to grubs, an eye-opening look at insect cuisine around the world.

An estimated two billion people worldwide regularly consume insects, yet bugs are rarely eaten in the West. Why are some disgusted at the thought of eating insects while others find them delicious? Edible Insects: A Global History provides a broad introduction to the role of insects as human food, from our prehistoric past to current food trends—and even recipes. On the menu are beetles, butterflies, grasshoppers, and grubs of many kinds, with stories that highlight traditional methods of insect collection, preparation, consumption, and preservation. But we not only encounter the culinary uses of creepy-crawlies across many cultures. We also learn of the potential of insects to alleviate global food shortages and natural resource overexploitation, as well as the role of world-class chefs in making insects palatable to consumers in the West.

"The work not only delves into the historical role of insects as human food, but their contribution to sustainable future food systems. . . . Edible Insects highlights stories of traditional methods of insect collection, preparation, consumption, and preservation. It also explores the role of world-class chefs in making insects palatable to consumers in the West. The book includes recipes for beetles, butterflies, grasshoppers, grubs, and more."

"Dr. Hunter’s book is a combination of a culinary eye-opener with a more serious explanation of how insects may provide a sustainable and healthy source of food for a number of presently under-nourished societies around the world."

The Goliath birdeater tarantula (Theraphosa blondi) is the world’s largest spider, as large as a dinner plate. To encounter it, photographer Peter Menzel and his wife, Faith D’Aluisio, travelled up the Orinoco River to a small village in the Venezuelan Amazon. From there, indigenous Yanomami boys took the couple tarantula hunting in the forest. Hunting for these spiders entailed sticking the ends of braided vines into underground tunnels where the spiders live until they grab hold of the braid and can be pulled out. After many hours of searching, a large T. blondi was captured. Back at the village, a boy stunned the tarantula by whacking it with a machete and then lowered it into a fire. As its insides cooked, it let out a hiss and a squirt of hot fluid a metre (3 ft) long. After seven minutes of roasting, they rubbed off the charred hairs, pulled off the legs and found white meat inside that tasted something like smoked crab. This great story comes from the couple’s award-winning book Man Eating Bugs: The Art and Science of Eating Insects (1998). The cover features a charming Cambodian woman munching on a smaller (but just as scary-looking) species of tarantula.

It must really bug the entomologists among us that a book dedicated to insects features a spider on the cover! Scientifically speaking, spiders are arachnids, not insects. In the folk taxonomy of many people, however, several taxonomically distinct orders of creepy crawly creatures are all lumped together under the general category of insects, or bugs to the average North American.

What Is an Insect?

The word ‘bug’, in English, dates to ancient times and once referred to ghosts—those frequently hard to see, frightening (or at least highly unpleasant) beings that lurk and pester. It is not hard to understand why the reference was later transferred to insects. The word ‘insect’ came into the English language in 1601, in a translation of Pliny the Elder’s Natural History. Like Aristotle of centuries before, Pliny developed a system of classifying the natural world. Insect comes from the Latin ‘cut into’, referring to the segments of an insect’s body. Entoma, the root of entomology (the study of insects), is Greek for the same thing. Their segmented bodies are one defining characteristic. The classification system currently used by scientists to name living creatures comes from Carl Linnaeus, a Swedish botanist, whose binomial (two-name) nomenclature is based on similarity of form, with each species belonging to a genus and genera arranged into larger and more diverse categories of families, orders, classes, phyla and, finally, kingdoms.

Insects are part of the animal kingdom, members of the phylum Arthropoda (from arthro, jointed, and poda, foot), which includes other intertebrate (without a backbone) creatures with jointed appendages and an exoskeleton (an external skeleton). Arthropods include many subcategories (or subphyla) such as crustaceans, earthworms and leeches spiders and scorpions, centipedes and millipedes. Insects belong to their own taxonomic class, Insecta, whose major distinguishing features are three major body divisions with three pairs of legs attached to the thorax. They are also the only arthropods (in fact the only invertebrates) that sometimes have wings.

So, to be taxonomically accurate, an insect is a small invertebrate animal that, as an adult, possesses the following characteristics: 1. a hardened exoskeleton; 2. three (usually) distinct body parts (head, thorax and abdomen); 3. one pair of segmented antennae; 4. one pair of compound eyes (in most cases); 5. three pairs of segmented legs, with one pair on each of three thoracic segments; and 6. usually one or two pairs of wings, although some adults are wingless.

One amazing fact about insects is that they are the dominant form of life on earth. Scientists have identified over 1 million species so far. By comparison, there are only 6,495 known mammals. Entomologists agree that there are millions of yet-to-be identified insect species, but estimates of exactly how many more vary tremendously, from 4 million to as many as 30 million more species.

How Many are Edible?

The number of potentially edible insect species is unknown. Professor Yde Jongema, an entomologist at Wageningen University in the Netherlands, maintains a list of insect species known to have been used as human food around the world. The task is complex since many records that mention insect consumption lack specific taxonomic information. Jongema’s most up-to-date list contains 2,111 edible species (this list includes spiders and other arthropods).

Many edible insect species are only eaten (or are preferred) during certain developmental stages, so it is important to understand a bit about insect life cycles. After hatching from eggs, insects develop by moulting, or shedding their hard, outer cuticle layer and expanding their tissues before the new cuticle hardens. This can happen four to eight (or even more) times; these immature, developing insects are called instars. The immatures (or nymphs) of some insects, such as grasshoppers, look like miniature versions of the adults and generally subsist on the same food as the adults. Other insects undergo complete metamorphosis into adulthood. Species of the butterfly and moth order Lepidoptera, for instance, mature from egg to larva (caterpillar) to pupa (chrysalis) to adult. The appearance and behaviour of the insect differs dramatically at these stages, and so does their potential use for human food.

The developmental stage of an insect determines its edibility and nutrient composition, as well as how it is collected and prepared. Butterfly and moth species are most frequently consumed in the caterpillar stage rather than in their winged adult stage.

Where are Insects Consumed?

While the human consumption of insects is often called entomophagy, a related term, ‘insectivory’, is generally reserved for dietary patterns of non-human animals that subsist primarily on insects. Whereas some non-human animals (and even some plants such as the Venus flytrap) are insectivorous, humans are omnivorous: that is, we are able to subsist on a wide variety of plants and animals. Entomophagy thus usually refers to a human food choice. Some writers also use the cumbersome ‘anthropoentomophagy’.

The consumption of insects is widespread throughout the world. Insects are eaten by 3,071 different ethnic groups in 130 countries.7 Generally, more insect species are consumed in tropical than temperate regions because there is greater biodiversity in the tropics and therefore a greater chance of finding a tasty bug. The significance of insects in people’s diets and the manner in which they are consumed vary by species and locale. The use and significance of insects in the human diet is both a biogeographic and a cultural phenomenon.

It was in 1960, in Gombe National Park, Tanzania, that the primatologist Jane Goodall first watched a chimpanzee snap a twig and peel all the leaves off. Eyeing a nearby termite mound, the chimpanzee dipped the twig into the termite hole for a moment before withdrawing it, now covered with termites. The termites promptly became a tasty snack for the lucky chimpanzee. Goodall’s revolutionary observations of chimpanzee tools erased the then-prevalent idea that tool-making is a uniquely human trait, and chimps have since been observed ‘fishing’ for termites with grass, leaves and sticks modified expressly for this purpose.

Chimpanzees use a variety of tools and techniques to obtain insect foods. Humans have similar tools for harvesting them. We probably both inherited our taste for them from our common ancestor who wandered the earth some 5–6 million years ago. Indeed, some of the earliest tools we have found with hominins, a term that refers to our direct ancestors as well as to various extinct bipedal relatives, are for insect gathering. The Australopithecines, who lived in Africa from 4.2 to 1.5 million years ago, devised bone tools to dig into termite mounds.

Studies of chimpanzees at Gombe have shown that termite-fishing behaviour is especially important for females. In fact, female chimpanzees who more frequently fish for termites have greater reproductive success than those who do so less often. Chimpanzees are known to occasionally kill and eat vertebrates, but males often dominate access to this meat. Termite fishing may be the way that female chimps ensure adequate nutrition for themselves and their offspring.