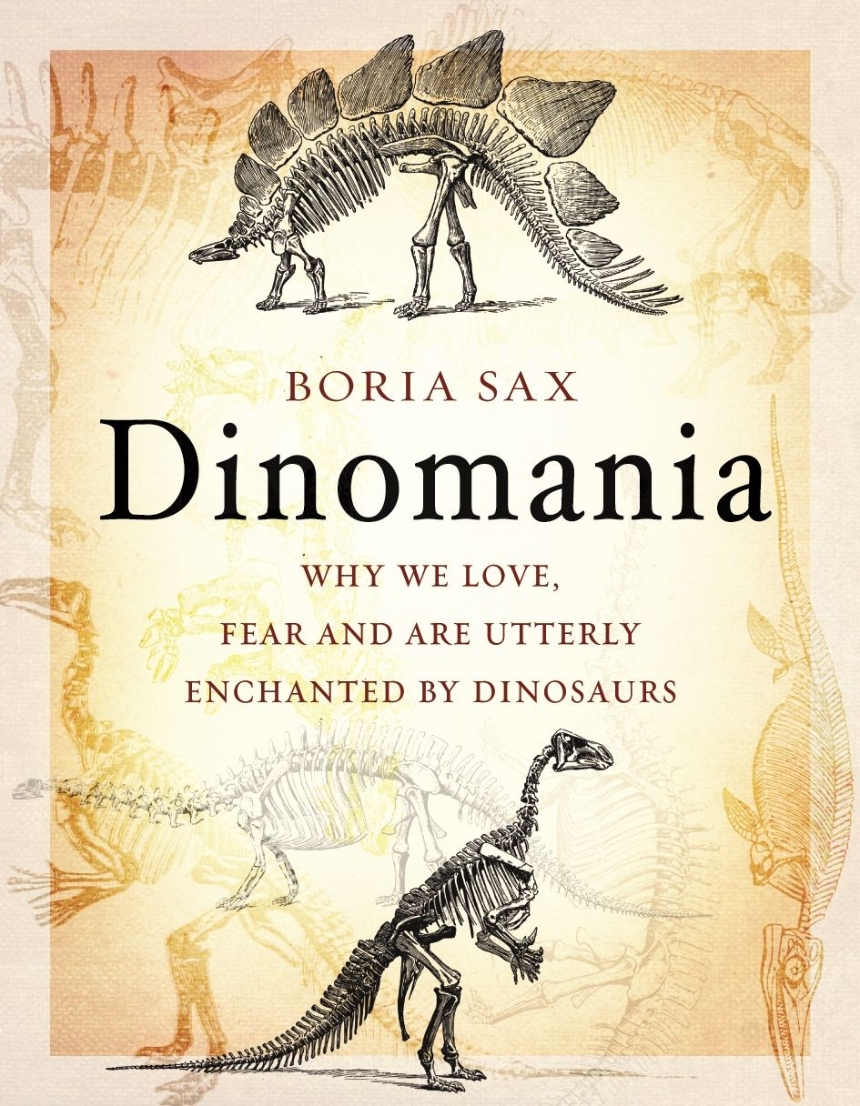 Why We Love, Fear and Are Utterly Enchanted by Dinosaurs

Why We Love, Fear and Are Utterly Enchanted by Dinosaurs

From Jurassic Park to Sue the T-Rex and Barney, our dino love affair is as real, as astonishing, and as incomprehensible as the gargantuan beasts themselves. At once reptilian and avian, dinosaurs enable us to imagine a world far beyond the usual boundaries of time, culture, and physiology. We envision them in diverse and contradictory ways, from purple friends to toothy terrors—reflecting, in part, our changing conceptions of ourselves. Not unlike humans today, dinosaurs seem at once powerful, almost godly, and helpless in the face of cosmic forces even more powerful than themselves.

In Dinomania, Boria Sax, a leading authority on human-animal relations, tells the story of our unlikely romance with the titanic saurians, from the discovery of their enormous bones—relics of an ancient world—to the dinosaur theme parks of today. That discovery, around the start of the nineteenth century, was intimately tied to our growing awareness of geological time and the dawn of the industrial era. Dinosaurs’ vast size and power called to mind railroads, battleships, and factories, making them, paradoxically, emblems of modernity. But at the same time, their world was nature at its most pristine and unsullied, the perfect symbol of childhood innocence and wonder. Sax concludes that in our imaginations dinosaurs essentially are, and always have been, dragons; and as we enter a new era of environmental threats in which dinos provide us a way to confront indirectly the possibility of human extinction, their representation is again blending with the myth and legend from which it emerged at the start of the modern age.

Fun and ferocious, and featuring many superb illustrations of dinosaurs from art, popular culture, film, and advertising, Dinomania is a thought-provoking homage to humanity's enduring dinosaur amour.

"Our fascination with these Mesozoic creatures has influenced thousands of years of culture, art, literature, religion, and science. How can this be, when dinosaurs weren't identified by humans until the mid-nineteenth century? . . . In this wide-reaching social history of the dinosaur-human relationship, Sax brings the story up to the present by highlighting contemporary museum exhibits, amusement parks, genre fiction, movies, and toys. With many historical illustrations, Dinomania is an entertaining addition to literature on popular science, pop culture, and public opinions.”

"Visually impressive; 128 illustrations form a striking record of changing portrayals of dinosaurs. Dinomania is a broad discussion rather than a deep one; it covers a wide range of topics, connecting them to each other but not exploring any one of them in great depth. It’s not superficial, though; it’s somewhere between an erudite after-dinner conversation and a more grounded academic discussion. This discursive approach works for a topic that invites speculation. Dinomania is a fascinating look at a curious subject. It ties many aspects of society together by looking at them from a new angle. Unlike most cultural histories, however, it’s got dinosaurs in it."

"Fascinating and well worth owning. The text is interesting and informative, and the pictures (all 128) add huge amounts to what is said."

"Rewarding for its unique and provocative take on more recent dinosaur enthusiasm. Recommended"

"Anyone buying this lavishly and beautifully illustrated book will know from its title not to expect a history of dinosaurs. This book instead, which appears to be born of the author's own genuine fascination with the creatures, traces how society has treated the discovery of the dinosaur from the earliest of times."

"We love to be terrified and dinosaurs somehow manage to do that, unless of course it is Dino out of the Flintstones, a dinosaur that everyone simply loves. The reality is entirely something different, and as you work your way through this fascinating work, you will come to understand why these amazingly enormous dinosaurs are loved and mostly respected. . . . A treasure trove of photographs, illustration, and graphics accompany the text."

“Lizard and Dinomania present author/researcher Sax at his multidisciplinary best: mixing and relating biology, botany, paleontology, anthropology, biography, history, mythology, art history, popular culture, and more, into coherent wholes. The skillful way he interweaves these various themes reminds this reviewer of the pictures and models of DNA strands as the complexity of the finished product emerges. . . . Sax and Reaktion Books receive extremely high marks for the quality of these books: not only good binding, but exemplary reproduction of illustrations in both black and white and color. An editorial choice was made to place illustrations throughout—rather than in special sections—something for which all readers should be grateful.”

“In this erudite, wide-ranging and engaged work, Sax explores the cultural flesh that has been wrapped around the fossilized bones of these iconic creatures. He asks, ‘What is a dinosaur?’ and shows that the answer is not merely a scientific one but is intimately linked to wider cultural trends and concerns. Extinct they might be, but Sax reveals how dinosaurs live on among us.”