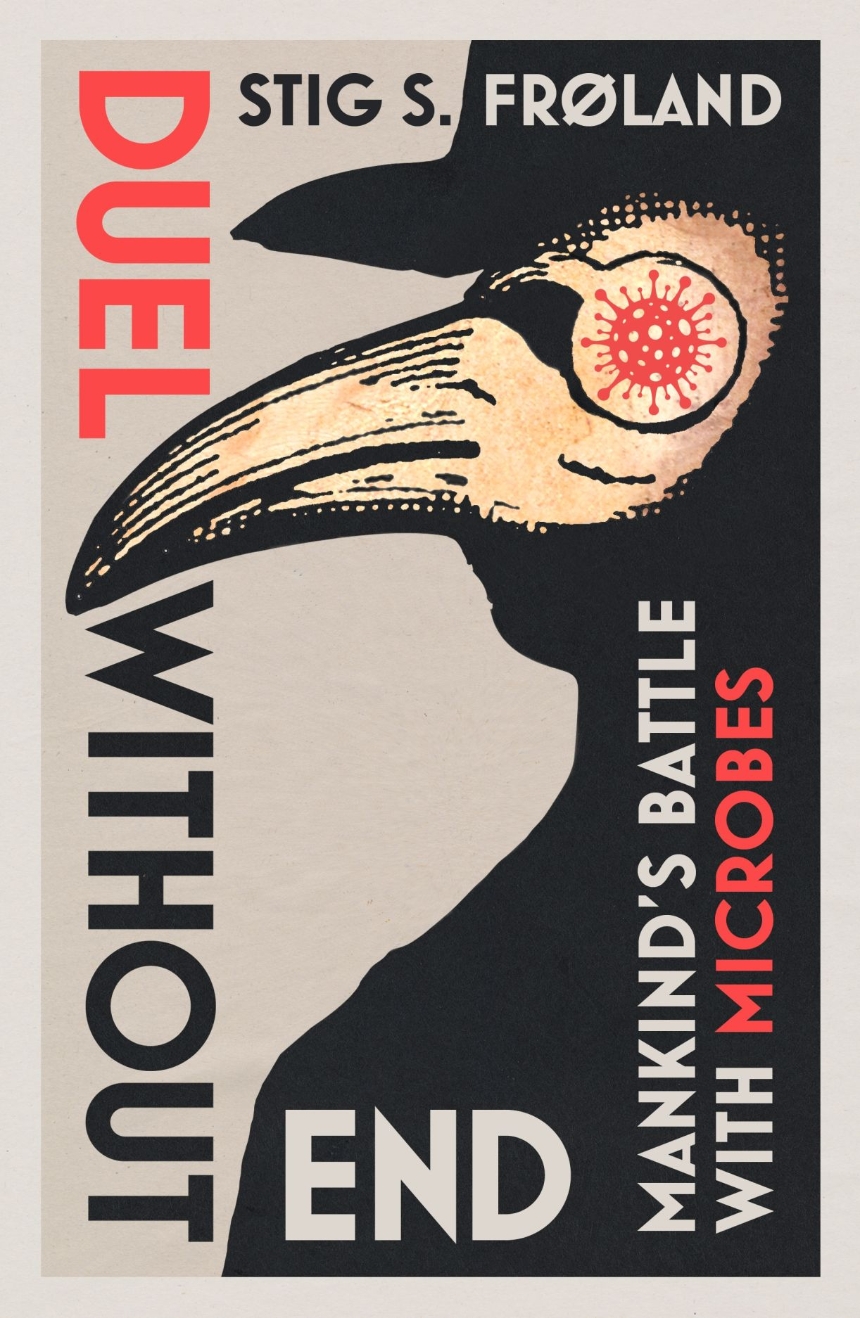 Translated by John Irons
From the bubonic plague to theoretical pathogens on other worlds, a sweeping look at the past, present, and future of mass infections—and how we battle them.

In this panoramic and up-to-date account, we learn how the Black Death, smallpox, the 1918 influenza pandemic, and other great epidemics have not only led to enormous suffering and mass death but have also contributed to the fall of empires and changed the course of history. We also discover how new infectious diseases such as HIV/AIDS and COVID-19 emerge—and how we wage war against them.

Humanity has struck back at the microbes: antibiotics and new vaccines have saved millions of lives. But the battle with these relentless, silent enemies is far from won. We face increasing threats from new and unavoidable pandemics, antibiotic resistance, and even potential extraterrestrial microbes. Duel Without End is a fascinating journey through the long history of infection, from the dawn of life to humanity’s future exploration of deep space.

"A masterpiece on man’s battle with microbes. . . . Every page gives a wealth of new information on the history of man from the perspective of infectious diseases. If you only buy a single book this year, buy this one. It will change your view on world history for ever."

"Frøland takes us on a fascinating journey through hundreds of thousands of years, from the dawn of humanity to the exploration of space. The book contains a wealth of interesting information and historical descriptions which makes it both easy to read and thrilling. It is difficult to put it down."

"An exciting, interesting, and thorough survey of the battle with microbes throughout our entire history . . . [written in] elegant and accessible language which is comprehensible to everyone. . . . A magnificent work."

Håkon Sjursen, professor of infectious diseases, University of Bergen | Journal of the Norwegian Medical Association, on the Norwegian edition

"An excellent book on the large pandemics through history. . . . Demonstrates in a brilliant way how modern biomedical research has contributed to the battle against microbes."

Homo sapiens – our own species of the human race – originally came from Africa. The first fossil finds of human types that manifestly looked like present-day humans were made in Africa and are more than 200,000, perhaps closer to 300,000, years old. About 60,000 years ago some of our ancestors left Africa and gradually spread out over all the earth’s continents, with the exception of Antarctica. This, until now, has been the prevailing view, but new research finds can be argued to imply that this migration started somewhat earlier, perhaps more than 100,000 years ago.

The first humans doubtless faced many threats and challenges. Considerable changes in climate conditions put their adaptability to the test – from tropical conditions on African savannahs to much cooler climates in temperate zones. Predatory animals of many kinds threatened our ancestors, including fearsome species that have long since become extinct, such as the sabre-toothed tiger and huge types of cave bear. Even so, human beings managed to develop strategies to survive these visible threats, although many lives must unquestionably have been lost in the struggle.

From the outset, however, our ancestors were exposed to other threats, at least as dangerous, about which they were unaware: attacks from invisible enemies, microorganisms that can cause infectious diseases. Bacteria, viruses, fungi and other microorganisms have been the cause of acute and chronic, deadly and more harmless infections. Throughout our entire history of development, a duel has been taking place between man and microorganisms – a never-ending duel that is still being fought and will continue to be so for as long as humans exist on the planet. This duel has had enormous consequences for Homo sapiens, not only from a medical point of view but on our history, culture and society. To understand the history of human infections through the ages it is not sufficient just to look at the two duellists – man and the microbes –and their attributes. It has gradually become apparent that the outcome of the duel is very often decided by ecological and environmental relations.

This book deals with this interaction between man, microbes and ecological factors throughout the thousands of years of man’s history of infection.

The fact that microorganisms such as bacteria and viruses can cause infectious diseases is now common knowledge, a natural part of what we learn as children. The same applies to an understanding of which diseases can be passed on from one person to another. Even so, not all that many years have passed since such views made their breakthrough via a number of epoch-making research finds in the second half of the nineteenth century. For several hundreds of thousands of years prior to this insight, Homo sapiens has constantly been the victim of a large number of infectious diseases both acute and chronic, fatal and banal.

What ideas did our ancestors have about the cause of such diseases, which quite often took a dramatic course as epidemics, with great consequences for society? An important characteristic of our species, one that distinguishes us from other animal species, is the wish to understand the surrounding world and what goes on around us. For that reason, humans have doubtless thought a great deal about the causes of the many diseases that we now know are infections. These early theories about disease were naturally shaped by the prevailing conceptions about
the world and the place of humanity within it.

It seems highly probable that religious ideas – the belief in supernatural forces in nature, and subsequently in various types of god that could intervene in human life – arose during an early stage of human development. The earliest conceptions of the causes of infectious diseases, naturally enough, were that they were a result of the intervention of
gods or demons. In the ancient civilizations of Sumer and Babylon in Mesopotamia, and also in China, we find over a period of thousands of years wide-spread popular belief in demons as the cause of infectious diseases. One important Mesopotamian deity was Nergal, the ruler of the underworld, who was worshipped as the god of fever, plague and war. Similar concepts were also found in ancient Chinese civilization.

In the Old Testament we find accounts of how Yahweh punished Israel’s foes with plagues. The Philistines were punished in this way when they stole the Ark of the Covenant from the temple in Jerusalem, and the Assyrians were struck down by a plague when they threatened to conquer Jerusalem. In the New Testament demons play an important role in diseases, including infections.

In ancient Greece religious concepts of the causes of disease were important, particularly in the event of epidemics. Here the god Apollo was a central figure, both as a bringer and curer of disease. He could cause epidemics by taking his bow and shooting plague arrows at people. In the very first book of the Iliad, Homer describes how Apollo sent a plague sweeping through the Greek armies because Agamemnon, the Greek commander, had offended the priest of Apollo:
The arrows clanged at his back as the god quaked with rage,
the god himself on the march and down he came like night.
Over against the ships he dropped to a knee, let fly a shaft
and a terrifying clash rang out from the great silver bow.
First he went for the mules and circling dogs but then,
launching a piercing shaft at the men themselves,
he cut them down in droves –
and the corpse-fires burned on, night and day, no end in sight.
In the Iliad the plague does not cease until Apollo has been pacified. In the tragedy Oedipus the King by Sophocles, the city of Thebes is ravaged by a plague epidemic. The oracle of Delphi announces that this is the punishment of the gods because the present ruler of the city, Oedipus, has killed the former king, who was his father. It is the patricide that here represents the offence against divine law.

The views of Homer and Sophocles were without a doubt in accordance with the people’s conceptions of the divine causes of epidemics. These concepts were retained among most people throughout antiquity and the Middle Ages. In Rome there were no fewer than three temples dedicated to the goddess Febris, who controlled fevers, the most common of which was probably malaria. Even in our own time we occasionally come across such attitudes in certain religious environments. When the AIDS epidemic broke out in the early 1980s, certain Christian preachers announced that this was the Lord’s punishment for ungodly sexual behaviour.

From antiquity until the present day, in many cultures there have also existed ideas that diseases, including infectious diseases, can be caused by black magic carried out by witches and magicians who are in contact with evil, supernatural powers. This has contributed to witch hunts down the ages and still occurs in certain African societies.

Sagas from the Norse period in Iceland and Greenland reveal that people also assumed there were supernatural causes of epidemics. There it was believed that the dead, at the outbreak of an epidemic, sought to drag the living along with them into death.

Ancient Greece has strongly influenced Western civilization in a great many areas. We have mentioned the religious explanations of the causes of infectious diseases in ancient Greek culture. At the same time, there were early alternative ways of thinking that attempted to understand nature and the place of humanity in it without resorting to religious explanations. The beginnings of natural science arose with the Greek philosophers of nature in the sixth and seventh centuries BC. A recurrent idea found in their works was that the universe consisted of a small number of basic elements that are normally in a state of balance. The same laws that apply to the macrocosm – the world around us– must also apply to the human body, they believed. Some of these philosophers claimed that illness resulted from the balance between the elements or components of the body being disturbed in some way or other. These basic ideas were developed by the half-mythical doctor Hippocrates of Kos and his many successors.

Despite the fact that Hippocrates is indubitably the most famous physician of all time, we know very little about him. He lived and practised in Athens in the fifth century BC, at roughly the same time as Socrates and Plato, the latter of whom refers to him in a number of his writings as being an excellent physician. The medical teaching ascribed to Hippocrates and his pupils is to be found in the so-called Hippocratic Collection (Corpus hippocraticum). We do not know which of these, if any, Hippocrates wrote himself. Among other things, they include a discussion of fevers and epidemics as well as their causes.