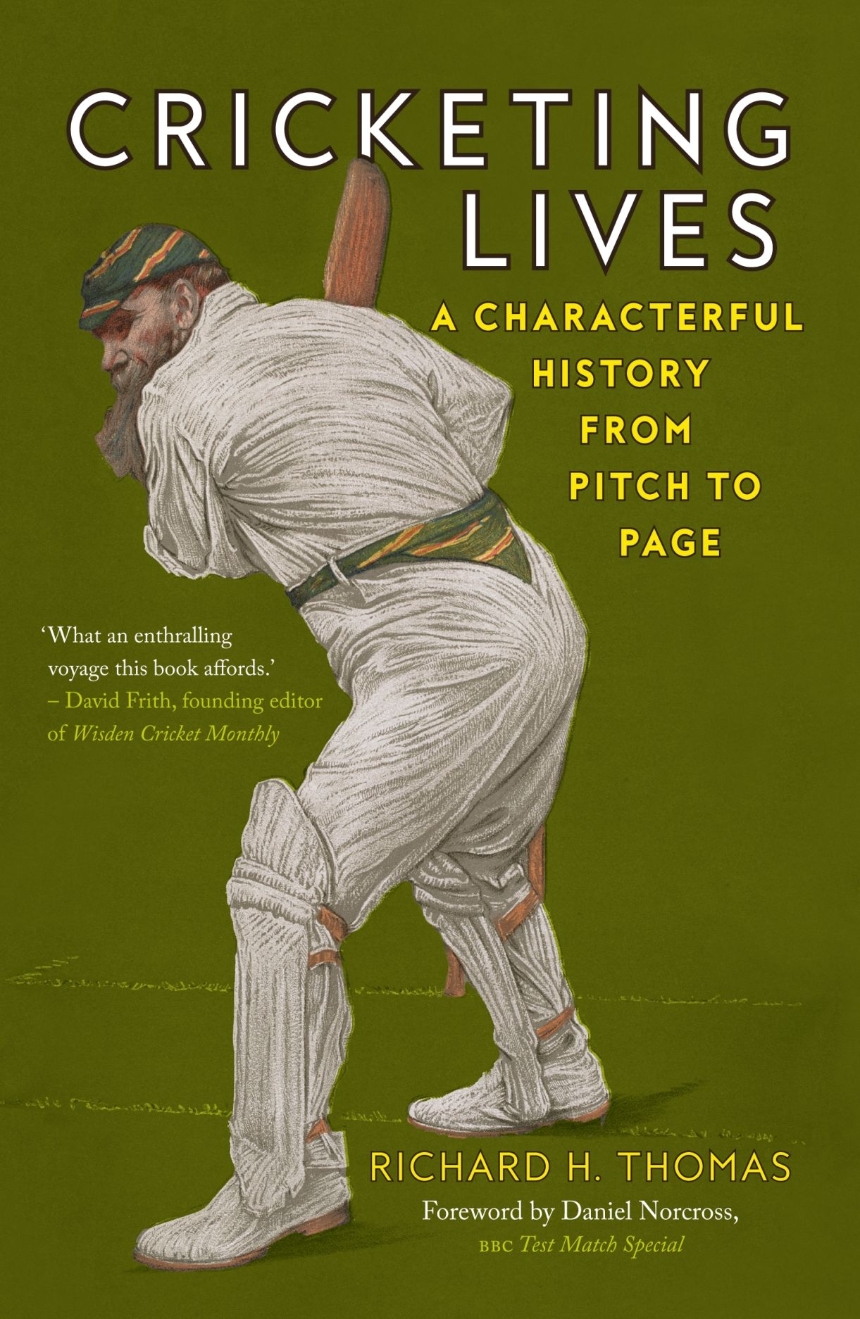 A Characterful History from Pitch to Page

A Characterful History from Pitch to Page

As famous for its complicated rules as it is for its contentious (and lengthy) matches, cricket is the quintessentially English sport. Or is it? From cricket in literature to sticky wickets, Cricketing Lives is a paean to the quirky characters and global phenomenon that are cricket.

Cricket is defined by the characters who have played it, watched it, reported it, ruled upon it, ruined it, and rejoiced in it. Humorous and deeply affectionate, Cricketing Lives tells the story of the world’s greatest and most incomprehensible game through those who have shaped it, from the rustic contests of eighteenth-century England to the spectacle of the Indian Premier League. It’s about W. G. Grace and his eye to his wallet; the invincible Viv Richards; and Sarah Taylor, “the best wicketkeeper in the world.” Richard H. Thomas steers a course through the despair of war, tactical controversies, and internecine politics, to reveal how cricket has always warmed our hearts as nothing else can.

“Give me Nancy Doyle over Alison Doyle, who is mentioned in a new book called Cricketing Lives, was head cook at Lord’s for thirty-five years, and took pride in feeding her cricketers well. When Mike Brearley, the England and Middlesex captain, asked if she could serve his players something less heavy than steak and kidney pudding, she erupted. ‘You worry about the f***ing cricket, Michael,’ she told him. ‘And I’ll worry about the f***ing food.’”

"Joyous... Thomas, a journalism lecturer, concentrates on the game's rich tapestry of people and anecdotes... This book is a chance to feast not just on the heroics of Stokes and 'Beefy' Botham, but the early days of cricket—Oliver Cromwell who liked it initially but later tried to ban it, Frederick, Prince of Wales, who died in 1751 after being hit by a ball (‘a rare case of play stopped reign’, it was said), W. G. Grace and his eye for his wallet, the playboys and profligates, boozers and buccaneers between the wars, the brutality of Bodyline... you name it, it's all here. Terrific."

"The game could wish for no more companionable host than Thomas. This is a warm and welcoming amble through history, with a new story at every turn."

"Absorbing... And it’s not just 'Boys’ Own stories': Thomas doesn’t neglect the 'great female legends of cricket.' Eileen Ash, an England player in the 1940s (who is still alive, aged 109), 'flew in a Tiger Moth on her one-hundredth birthday and kept one of Don Bradman’s bats by her bed to repel burglars.' Nancy Doyle, the 'volcanic' head cook at Lord’s, once responded to Mike Brearley’s request for lighter fare than steak and kidney pudding by telling England’s then captain: 'You worry about the f***ing cricket, and I’ll worry about the f***ing food' ... Heavy on research but light in touch, this is a book with something for everyone."

“Drunks, cads, and rogues abound in Cricketing Lives, a collection of portraits of the sport’s colorful characters by Thomas. They include Bill Edrich, the postwar England batsman who married and divorced regularly. At the fifth wedding his teammate JJ Warr was asked if he was bride’s side or groom’s. ‘I have a season ticket,’ he replied.”

"'Absorbing and entertaining... Thomas has done something unusual but actually very simple and effective. He tells cricket’s long and involved history through some of the interesting and characterful men (and a few women) who have played the game at the highest level. It is at heart, a Brief Lives of Cricket—not a discrete series of character portraits but a continuous flowing narrative that hops from player to player with elegance and wit... In short, he knows his stuff... This is a very good cricketing history indeed, and highly recommended."

“[An] entertaining collection of portraits of cricket's characters. . . . So colorful and well told is this book, heavy on research but light in touch, that it should interest even those who find the game dull. . . . The book will certainly appeal to those who love dipping into Great Lives and who already feel, with Douglas Jardine, the former England Captain, that cricket is ‘that beautiful, beautiful game that is battle and service and sport and art.’”

"Thomas offers all of cricket's history in his Cricketing Lives, and he has written the kind of book you'd love to settle down with on a winter's night as the wind blows outside, a warm and generous history that glows with love as well as learning. . . . Thomas has a knack for finding the quote you've never read, the reference that sends you scuttling towards unfamiliar books."

"This compendium is lucidly written and constitutes a real page-turner with an appeal to the longstanding follower of the game as well as to those relatively new to the sport, as it offers color, a route into the sport via the author’s capacity to thread disparate issues together combined with a quirky selection of illustrations to argue his point. The recollection of detail of some major matches also sucks the reader into the volume’s gentle tone."

"What an enthralling voyage this book affords, with its vivid style and sequences of fascinating detail. Thomas has created something unusually readable."

"A wonderful read. Exhaustive and comprehensive as a reference tome, but also infused with a passion for the game and its players that distinguishes a mere cricketing aficionado from a true cricket lover."