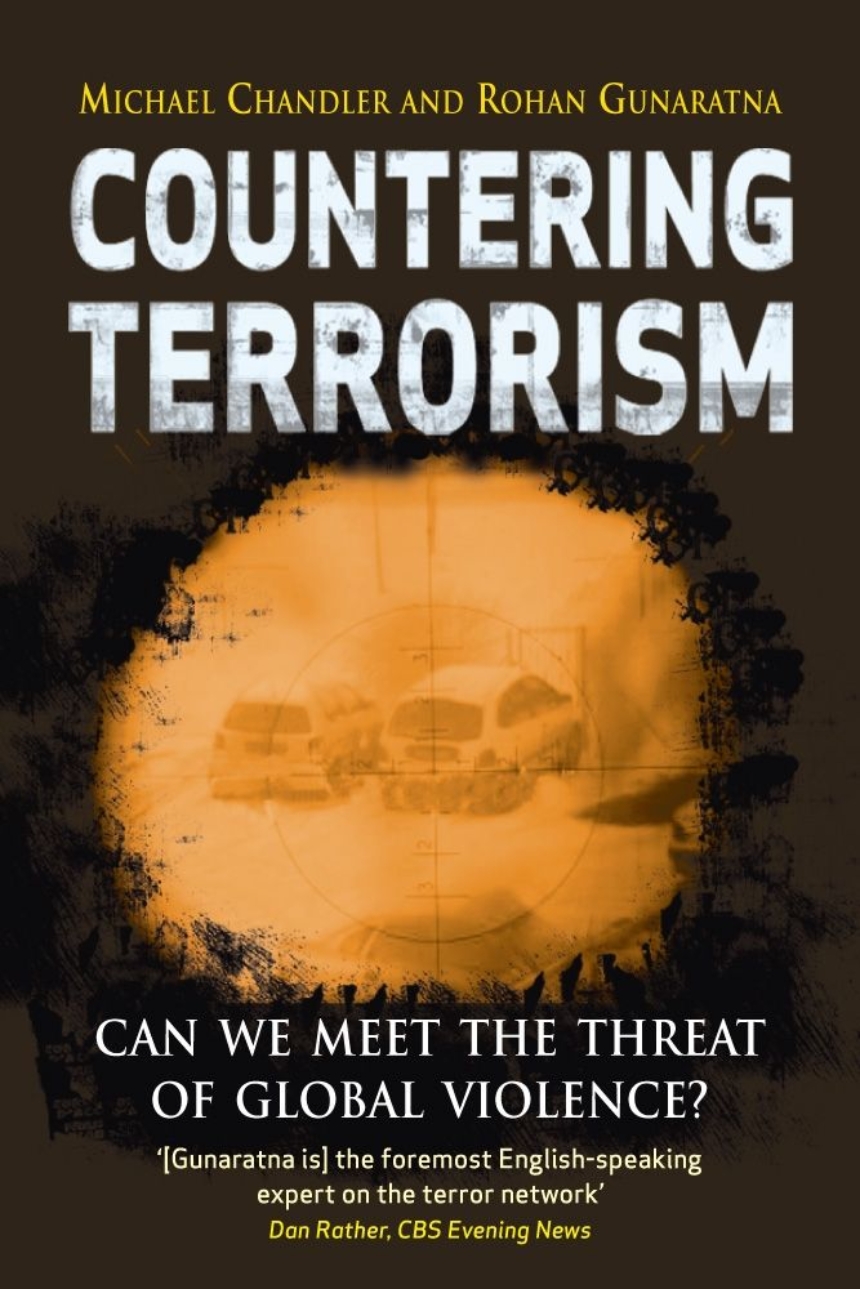 Can We Meet the Threat of Global Violence?

Can We Meet the Threat of Global Violence?

Five years after 9/11, we question whether or not terrorist activity has actually decreased. Terrorist networks still span the globe and, some argue, they are more powerful than ever. Yet in this era of rigid security and U.S.-led wars on multiple continents, countries are at odds about how to deal with the looming threat—and chaotic aftermath—of terrorist acts. In Countering Terrorism, Rohan Gunaratna and Michael Chandler sift through political commentary, military maneuvering, and the tangled web of international diplomacy to put us on alert: The world has missed a prime opportunity to crush terrorism.

Chandler and Gunaratna are among the world’s foremost experts on international terrorism, having logged between them over forty years of firsthand experience in the field and planning rooms, analyzing and dealing with an unceasing succession of terrorist threats and conflicts. Chandler and Gunaratna employ their unparalleled expertise to probe the catastrophic attacks so indelibly seared into the history of the early twenty-first century, from 9/11 to the Madrid bombings to deadly strikes in Afghanistan, Iraq, Pakistan, Palestine, and elsewhere. They ask the hard questions we never hear on nightly newscasts: Why has the overall response to terrorism after 9/11 been “so abysmal, slow, piecemeal, and to a large extent far from effective?” Why have some countries, despite international criticism, disregarded universally accepted humanitarian norms when handling the prosecution of terrorist suspects?

By allowing politics to trump the need for trans-national cooperation, the authors contend, the international community—and particularly the United States—has squandered an opportunity to combat terrorism with a united and powerful force.  Thus what should have been a watershed moment in international relations vanished as effective long-term policies were shunned in favor of short-term political expediency.

From arguing the Iraq War has been a “strategic defeat” to Afghanistan’s struggle against the Taliban to the rapidly growing geopolitical role of Iran, Countering Terrorism investigates the reality of the changes that followed the bombings and attacks and examines global terrorism from every angle, including the social and economic underpinnings of terror networks. Scholars, experts, and citizens have appealed for a re-evaluation of today’s increasingly ineffective “War on Terror” policies, and Chandler and Gunaratna answer this call with clear and concise proposals for future dealings with global terrorism.

The projected end results of the wars, terrorist attacks, and political upheavals tearing nations apart today are rarely anything but bleak. But Countering Terrorism challenges today’s chaotic status quo, offering penetrating analysis and a radically new perspective essential to grappling with the complexities of terrorist activity and counterintelligence today.

"A timely book that fills a lacuna in the counter-terrorism literature and has to be on the bookshelf of any decision-maker, scholar, student and anyone who is interested in understanding the current and the future trends of international terrorism and the strategies that has to be taken to combat this threat."--Dr. Boaz Ganor, author of The Counter-Terrorism Puzzle: A Guide for Decisionmakers

"The comprehensive international expertise and knowledge of Michael Chandler, with the lifelong scholarly and practical knowledge of Dr. Rohan Gunaratna combine to produce this must read book. A timely book that fills a lacuna in the counter-terrorism literature and has to be on the bookshelf of any decision-maker, scholar, student and anyone who is interested in understanding the current and the future trends of international terrorism and the strategies that has to be taken to combat this threat."

Dr. Boaz Ganor, author of The Counter-Terrorism Puzzle: A Guide for Decisionmakers

“Beautifully written by two leading counter-terrorist experts, this book gives a unique insight into the mistakes of the ‘war on terror.’ It should be required reading for No. 10 and the White House.”

“This is the nearest thing I have read to a textbook on countering the terrorism of extremist Islam.  It contains a thorough record of key events, a clear analysis of the different aspects of the problem, including the overlay of regional issues and the responses of governments, principally the U.S.  Nor are the authors afraid to criticise US policy and make recommendations of their own.  It is a compact and highly informative read, which should be mandatory for senior officials taking on counter-terrorist responsibilities.”

James Delingpole | The Mail on Sunday

"The sections describing the frustrations of the [U.N. Monitoring Group’s] work form the most instructive part of this book."

"Their urgent warning of the failures thus far, and the need for urgent redress given that  these very failures are contributing to an obvious worsening of the threat of global terrorism, are messages that governments and policymakers need to hear. In sum, this is therefore a timely and valuable book, and as Loretta Napoleoni has said on the back cover in her endorsement, ’required reading for Number 10 and the White House.’"

"A comprehensive, detailed analysis of many aspects of transnational terrorism. . . . A thorough analytical work with the potential to transform thinking about the present strategies on the war on terror, this book should be required reading for White House, Pentagon, and State Department officials responsible for counterterrorist operations. Highly recommended."

1. Current and future terrorist threat
2. To know and understand one’s enemy
3. Iraq: A Strategic Defeat?
4. The Iranian Connection
5. Terrorism: An Enduring Threat
6. United Nations: Rising to the Challenge
7. Afghanistan: Taliban and beyond
8. Initial Reactions to “9/11”
9. Towards Tougher Sanctions
10. Life Blood of terrorism
11. Terrorism and Modern Communications
12. The Reluctant Leadership
13. Pathways Out of Violence
Back to top