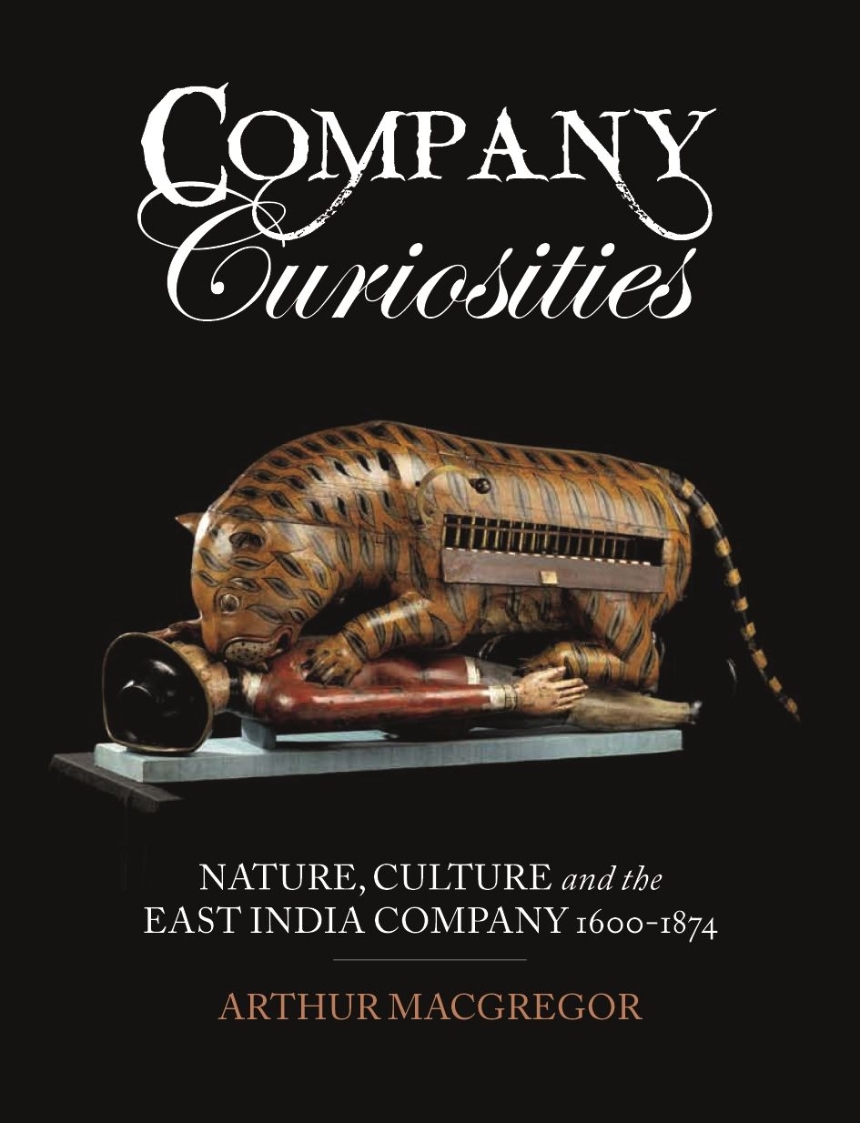 In colonial India, a range of administrators, soldiers, surveyors, and others invested large parts of their lives in attempting to inventory and comprehend the vast country, its teeming populations, and their myriad customs and religions. Company Curiosities offers the first overview of the remarkable role of the East India Company and its servants in collecting, cataloging, and transmitting from India to Europe a treasure-house of natural specimens and man-made objects—from craft materials to paintings and sculptures, weapons, costumes, jewels, and ornaments.

For a time, the East India Company’s own India Museum in London led the way in presenting their findings and establishing for a larger public the characteristic features of a subcontinent that would become the heart of Britain’s worldwide empire. Later, when the Great Exhibition and its successors redefined the style and the scale of presentation of the world’s commercial and industrial processes, the Company’s talented curators (now under their new masters, the India Office) continued to play a key role in articulating these materials. Meanwhile, Company employees returning from years of service diffused a taste for all things Indian. Superbly illustrated, Company Curiosities reveals how these diverse players invented the look and feel of India for those who had never ventured abroad.

“For nearly two centuries, much of what the West knew about Asia came through the East India Company, the British corporation (1600-1873) that exercised a monopoly on trade with India and Southeast and East Asia. . . . Company Curiosities showcases specimens that the company collected there, including crafts, weapons, jewelry, and ornaments.”

"MacGregor has bravely and broadly charted this immense territory, creating an indispensable map, guide, and first port of call. . . . At a time when the director of the Victoria & Albert Museum is calling for a return to the original aims of the museum, as a source and inspiration for manufacturers, he would do well to read this book, to see how well the East India Company accomplished this aim, if not through its own museum, then through its legacy of involvement with temporary exhibitions and other institutions."

"MacGregor’s engaging and informative text opens up a fruitful new aspect of our shared history, enriched with unfamiliar images and intriguing documents, illuminating the complex and deeply entwined visual and cultural histories of India and Britain."

"Company Curiosities is an ambitious book. It seeks to give an overview of the collecting and related activity of the East India Company and its servants from the seventeenth century to the company’s final days in the aftermath of the Indian Mutiny. No previous study has attempted this comprehensively. . . . The book lives up to its promise to examine the whole of the company’s collecting. . . . MacGregor's book is strong on illustrative detail, and he obviously has a wealth of material at his disposal. Happily, he does not get bogged down in the detail, deploying specific examples to good effect in thematic chapters and sections. . . . The prose is lively and interesting. . . . Well produced, with nearly two hundred illustrations, many in color."

"Company Curiosities is the insightfully told story of how natural history, but also archaeological and ethnographical, collections from South Asia became accumulated and cultivated by the EIC, and how these collections informed the public, shaping the Britons’ views of India’s potential and exploitability, but also its beauty, nature, and heritage. . . . A handsomely designed, well-bound, and lavishly illustrated volume in royal octavo format: a pleasure to read."

"MacGregor has taken on a huge task in endeavoring to cover every aspect of the Company’s ‘cultural wing’ as it would be called today. Some of the commissioned or collected items mentioned have generated their own scholarly research fields including early photography of India’s ancient monuments, and botanical and animal paintings. It is good to have them all together in a single, if large volume with copious notes and illustrations. This is a welcome antidote to writers who have chosen to concentrate on the Company’s misdeeds, rather than acknowledging what was perhaps the largest ever concentrated effort by one country to understand another."

"MacGregor is preeminently qualified as a specialist in collection history. Numerous monographs, journal articles, and museum and exhibition catalogs have highlighted aspects of this fascination with India, but Company Curiosities covers the whole. . . . The book includes a large number of well-chosen quotes and contains 178 illustrations. . . . It is a rich, very informative, readable book, based on extensive literature."

“Company Curiosities significantly enhances our understanding of colonial collecting in India and the presentation of these collections in Britain.”