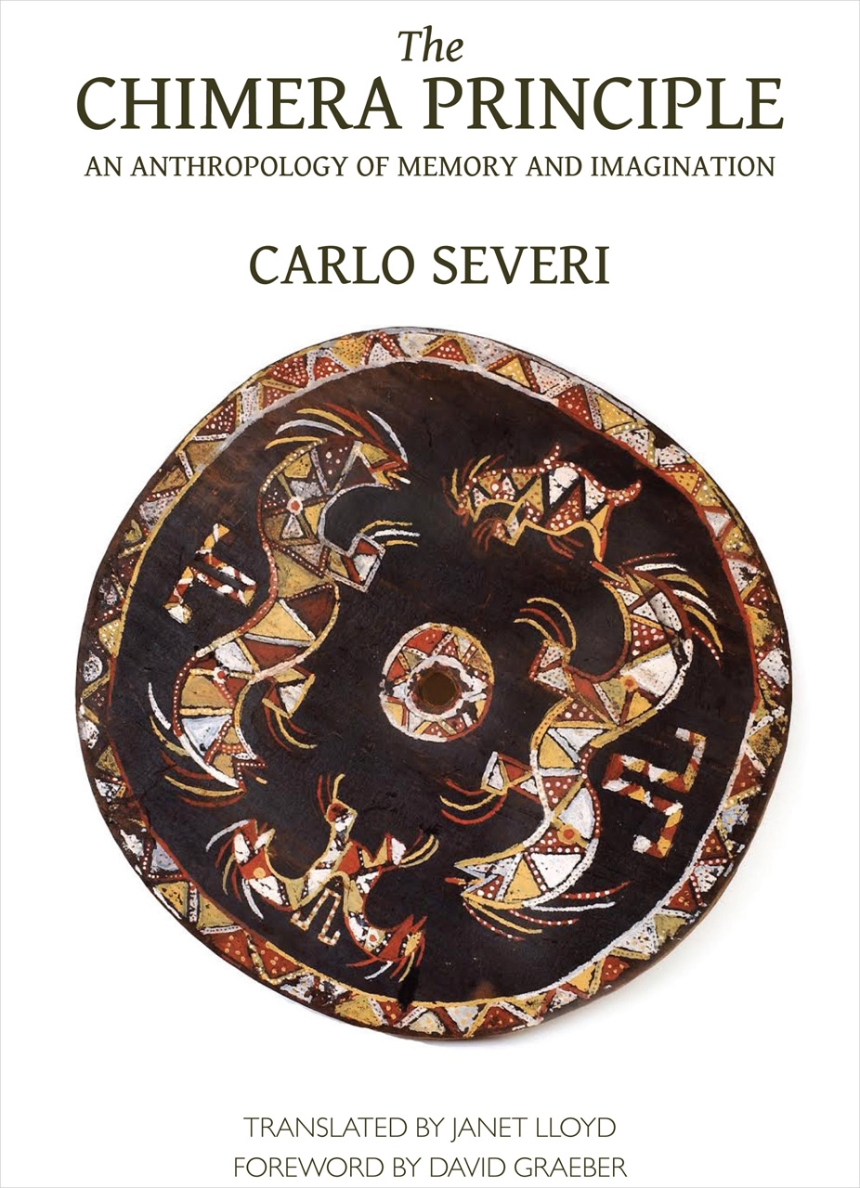 An Anthropology of Memory and Imagination

An Anthropology of Memory and Imagination

Translated by Janet Lloyd with a Foreword by David Graeber

Available in English for the first time, anthropologist Carlo Severi’s The Chimera Principle breaks new theoretical ground for the study of ritual, iconographic technologies, and oral traditions among non-literate peoples. Setting himself against a tradition that has long seen the memory of people “without writing”—which relies on such ephemeral records as ornaments, body painting, and masks—as fundamentally disordered or doomed to failure, he argues strenuously that ritual actions in these societies pragmatically produce religious meaning and that they demonstrate what he calls a “chimeric” imagination.

Deploying philosophical and ethnographic theory, Severi unfolds new approaches to research in the anthropology of ritual and memory, ultimately building a new theory of imagination and an original anthropology of thought. This English-language edition, beautifully translated by Janet Lloyd and complete with a foreword by David Graeber, will spark widespread debate and be heralded as an instant classic for anthropologists, historians, and philosophers.

“The translation of The Chimera Principle: An Anthropology of Memory and Imagination is a major event in Anglo-American anthropology. Remarkable for its scholarly depth, its ability to recast the whole field of memory and imagination through its relation to visual and sound images, and above all its complete mastery over comparative ethnography, this book is a stunning landmark in anthropological theory.”

“Here is an ambitious, comparative anthropology of mnemonic arts proposed with special attention to visual imagery and related ‘techniques for constructing memorable knowledge.’ Severi has conducted extensive research among Kuna peoples of Central America and is influenced by the brilliant ruminations of the cultural theorist Aby Warburg (1866–1929). Severi calls for recognition of deliberately ambiguous ‘ways of organizing differences’ to propose particular understandings ‘that do not recognize any pre-established center of epistemological priority.’ ‘Oral cultures’ represent knowledge in teasing instability and incompletion, he asserts, for community members seeing an Apache pictograph or hearing an Iatmul myth are expected to fill in details from their senses of how the world works and what is at stake during a given performance event. ‘A society’s memory is never single,’ Severi reminds readers, and ‘every … memory is, inevitably, the memory of a person’ bound to forget details and invent replacements. Exegeses further vary according to political and aesthetic needs of the moment. Through a ‘chimera principle,’ counterintuitive juxtapositions of heterogeneous ideas, references, and parts-of-wholes (think gargoyle as a synonym of chimera) instigate imagination, even as wisdom is recalled and creative problem solving is undertaken. . . . Recommended.”

“This highly engaging and deftly written book is the fruit of exemplary scholarly work and is likely to become an indispensable reference for future research on the anthropology of memory and the so-called ‘oral’ cultures. . . . The Chimera Principle is an exceptionally detailed and analytical work of great academic value, which can nevertheless be read by non-specialists and be of interest to a broad and diverse reading public. Putting the old argument about the supposed fragility of memory among so-called ‘oral’ societies, as well as the common view that pictography was either a communication system that is forever lost to us or an ‘unsuccessful attempt to invent a type of writing,’ on an entirely new basis, The Chimera Principle is a fascinating work that makes an important contribution to the anthropology of memory.”

Journal of the Anthropological Society of Oxford

"Carlo Severi’s The Chimera Principle is a forceful study for anyone who wants to move beyond conventional concepts of 'text' and 'image.'… In this brilliant translation of what is certain to become an instant classic in visual anthropology, we come to understand how sound and image become alive in acts of communication."

Thomas Cummins, co-author of Beyond the Lettered City: Indigenous Literacies in the Andes

"The centrality of comparative interpretation to anthropology is dazzlingly illustrated in Severi’s The Chimera Principle. This is a book in the grand tradition of Claude Levi-Strauss’ Mythologiques. Severi begins with a meditation on a Zande harp, followed by a discussion of the art historian Aby Warburg’s expansive efforts to understand so-called primitive art. Warburg visited the Hopi in 1895–96 and became fascinated by children who, when asked to draw lightning, drew a snake. The lightning-snakes they drew become the prototype of Severi’s chimeras, artistic productions that Western analysts have consistently misinterpreted in terms of the referential function of language—a tack that leads them to categorize such objects as “crudely realistic,” “abstract,” “decorative” or “imaginary” (Severi 2015a:33–34). None of those terms, Severi argues, gets at the mnemonic and ritual functions of such arts, and he sets out on a grand quest, mainly across the Americas (but with forays into Oceania and New Guinea) to create a new “anthropology of memory and imagination,” as the subtitle of his book has it."

"The Chimera Principle: An Anthropology of Memory and Imaginationis making a contribution to different fields of interest in anthropology: memory, ritual, and images, among others, bringing them together in a coherent argument… this is not just a collection of essays, on the contrary it is a very coherent volume with a sustained narrative that unfolds chapter by chapter."

"There are at least two ways of constructing memories, Severi urges. The first is narrational: legends, myths, and stories based on linear sequences in established genres. The second, contrastively, is a song form, depending on an iconic formulation of knowledge: as in shamanistic ritual action that constructs complex images characterized by simultaneity and condensation of certain commonplaces that the tradition would transmit. But the images are also chimeras: allusive, contradictory, unfinished, calling on the imagination of culture members to be collaboratively or dialogically exercised in ceremonial contexts for the purpose of together ‘remembering’ ‘the culture’... Carlo Severi’s book evidences much careful archival scholarship that would reconstrue earlier anthropological understandings of ‘primitive art’; rather than representations of the world, here are objects of memory and imagination that provide a codification of mental space. The book calls for a comparative anthropology of iconographic traditions that work through the mnemonic use of images – understood as the ‘non-Western memory arts’ (p. 19)."

"Originally published in French in 2007 and now available in English for the first time, Carlo Severi’s influential The Chimera Principle is a book that seeks to transform the anthropology of memory and imagination, as its subtitle suggests. Based on Severi’s fieldwork among the Kuna of Panama, as well as on his extensive bibliographic knowledge of art and anthropology, the book considers long-standing anthropological questions such as the relationship between oral and literate cultures, the prevalence of the mnemonic form in Amerindian the ambiguous character of shamanic singers… and the relevance of projection to the anthropological concept of belief."