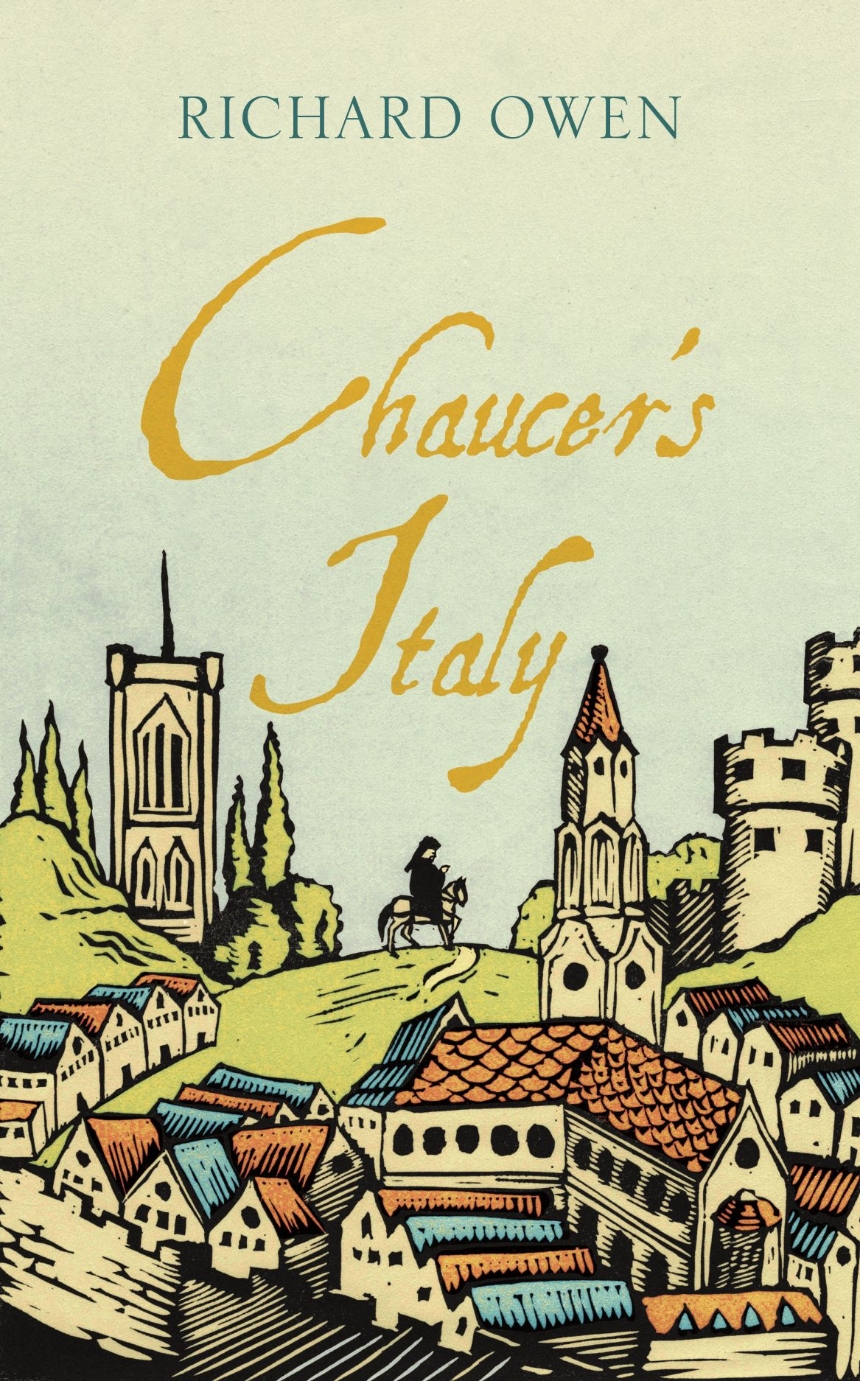 An exploration of the influence of Italy and Italians on Chaucer’s life and writing.

Geoffrey Chaucer might be considered the quintessential English writer, but he drew much of his inspiration and material from Italy. In fact, without the tremendous influence of Francesco Petrarch and Giovanni Boccaccio (among others), the author of The Canterbury Tales might never have assumed his place as the “father” of English literature. Nevertheless, Richard Owen’s Chaucer’s Italy begins in London, where the poet dealt with Italian merchants in his roles as court diplomat and customs official. Next Owen takes us, via Chaucer’s capture at the siege of Rheims, to his involvement in arranging the marriage of King Edward III’s son Lionel in Milan and his missions to Genoa and Florence. By scrutinizing his encounters with Petrarch, Boccaccio, and the mercenary knight John Hawkwood—and with vividly evocative descriptions of the Arezzo, Padua, Florence, Certaldo, and Milan that Chaucer would have encountered—Owen reveals the deep influence of Italy’s people and towns on Chaucer’s poems and stories. Much writing on Chaucer depicts a misleadingly parochial figure, but as Owen’s enlightening short study of Chaucer’s Italian years makes clear, the poet’s life was internationally eventful. The consequences have made the English canon what it is today.

"A fascinating insight into Chaucer’s world."

Mary Hollingsworth, author of Princes of the Renaissance

"Owen performs the remarkable feat of showing us Italy through Chaucer’s eyes. It’s a wonderful evocation of the vibrant intellectual, commercial and cross-cultural exchanges at the height of the Middle Ages—and the perfect read for a getaway break to Florence, Genoa or Milan."

Ross King, author of The Bookseller of Florence

"By scrutinizing his encounters with Petrarch, Boccaccio, and the mercenary knight John Hawkwood (and with vividly evocative descriptions of the Arezzo, Padua, Florence, Certaldo, and Milan that Chaucer would have encountered), Owen reveals the deep influence of Italy's people and towns on Chaucer's poems and stories. Much writing on Chaucer depicts a misleadingly parochial figure, but as Owen's enlightening short study of Chaucer's Italian years makes clear, the poet's life was internationally eventful... Inherently interesting, deftly written, impressively organized and presented."

In a collection of stories called the Decameron, the Italian author Giovanni Boccaccio tells of an elderly nobleman in ancient Greece named Nicostrato, whose young and beautiful wife Lidia is ‘badly served in that one thing in which young women take most pleasure’. She falls in love with Pirro, a handsome servant; she then pretends to be ill, gets Nicostrato and Pirro to carry her into a garden, and asks Pirro to climb into a pear tree to pick some pears for her. Pirro looks down, pretends he can see the husband and wife making love, and says the pear tree must have the power of optical illusion. Old Nicostrato climbs into the tree to check this out, looks down, and sees Pirro and his wife making love on the ground. He climbs down in a fury, calling his wife a ‘wicked slut’ – but, by the time he reaches the ground, the lovers have separated. They convince him that the pear tree is bewitched and must have made him see an illusion.

Some forty years later, Chaucer, writing his Canterbury Tales, sets the story in Italy, which is where he probably first read it, or perhaps heard it. In his version, called ‘The Merchant’s Tale’, an elderly bachelor knight in Pavia called January decides to marry ‘a young and pretty woman’ called May. But January goes blind and, when he takes his wife into the garden, May climbs up into a pear tree to make love to a handsome servant called Damian. January regains his sight and sees Damian ‘thrusting away’ up in the pear tree – or, as Chaucer puts it, ‘and sodeinly anon this Damian gan pullen up the smok and in he throng’. Old January is furious, calling his wife a whore, but she claims that by ‘struggling with a man up a tree’, as she had been told to do in a vision, she had cured his blindness, ‘as God is my witness’. Because of the magic pear tree, January is imagining things, May says, adding, ‘this is all the thanks I get for curing your blindness’ and bursting into histrionic tears.
Chaucer never wrote an autobiography. We do not know if the Chaucer who narrates the Canterbury Tales – portly, selfeffacing, ironic, slightly detached, and sometimes naive or not very bright – is how Chaucer saw himself, how he wanted to be seen, or how he really was seen. (…)

But the real Chaucer was a man of enormous diplomatic and business experience – canny, witty, and clearly very, very sharp. For Nigel Saul, ‘Chaucer was a born storyteller. Does that imply that he was superficial? Certainly not. He was a man of the world, acute and perceptive in his observations.’ And Italy was very much part of his world and his perceptions. As Helen Fulton puts it, ‘What is striking about Chaucer’s use of his Italian sources is the way in which he distributes the borrowed material throughout his work, smelting it, combining it with other elements, and then refashioning it into new gold of his own making.’ (…)

As a teenager, Chaucer fought in the Hundred Years’ War and was captured near Reims. Later, he almost certainly helped to arrange a royal marriage in Milan as his status rose in the royal court, first under Edward III and then under Richard II, and he certainly made two visits to Italy as a diplomat that had a huge impact on his writing. As Wendy Childs has noted, ‘England’s Italian contacts were regular and longstanding, particularly through Church links with Rome, but also through political, intellectual, and commercial channels.’ The Crown’s economy under Edward III largely depended on Italian financiers, especially Matteo Cennini (Matthew Cheyne) and, above all, Walter (Gualtiero) de Bardi, or de Bardes, who became Master of the Mint and a Freeman of the City of London. Chaucer, who would have known both Cennini and de Bardi in London, was sent in 1372, on a mission first to Genoa and then to Florence, where the Bardis were based, to negotiate new loans for the king, despite the fact that Edward III had defaulted on earlier debts. (…)

Thanks to his dealings with Italian merchants and diplomats as he moved up the social ladder and into court circles, Chaucer spoke Italian and absorbed the writings of celebrated Italian authors who had a profound influence on him – above all, Dante Alighieri, Francesco Petrarch, and Giovanni Boccaccio. As Kara Gaston puts it, ‘Chaucer’s reading of Italian literature had an effect on him: before he changed it, it changed him.’ (…)

On one hand, ‘Italy’ in Chaucer’s time was still more of a geographical entity than a political one, and the inland cities were dominated by ruling dynasties – the della Scalas in Verona, the Viscontis in Milan, the Gonzagas in Mantua, the d’Estes in Ferrara. The South was dominated by the Kingdom of Naples, while in the middle the Papal States were centred on Rome but stretched to Bologna and Ferrara in the North and Frosinone in the South. On the other hand, Italy has always been made up of rival areas with fiercely independent local identities, from Sicily and Sardinia to Lombardy and the Veneto, yet the concept of Italianità (‘Italianness’) was as widespread in Italy in the Middle Ages as it is in our own day. In his Canzoniere, the collection of sonnets addressed to his idealised love, Laura, Petrarch refers to ‘Italia mia’ or ‘nostro stato’ (‘our nation’), defining Italy as the land with three great rivers: the Tiber, the Arno, and the Po.

The saying that un inglese italianato e un diavolo incarnato (‘an Italianised Englishman is a devil incarnate’) is said to have been coined for John Hawkwood. In a sense, Chaucer, too, was un inglese italianato. But his encounter with continental Europe did not begin when he crossed the English Channel for the first time as a teenager, or when he crossed the Alps later as a young man: it began even earlier, in London.