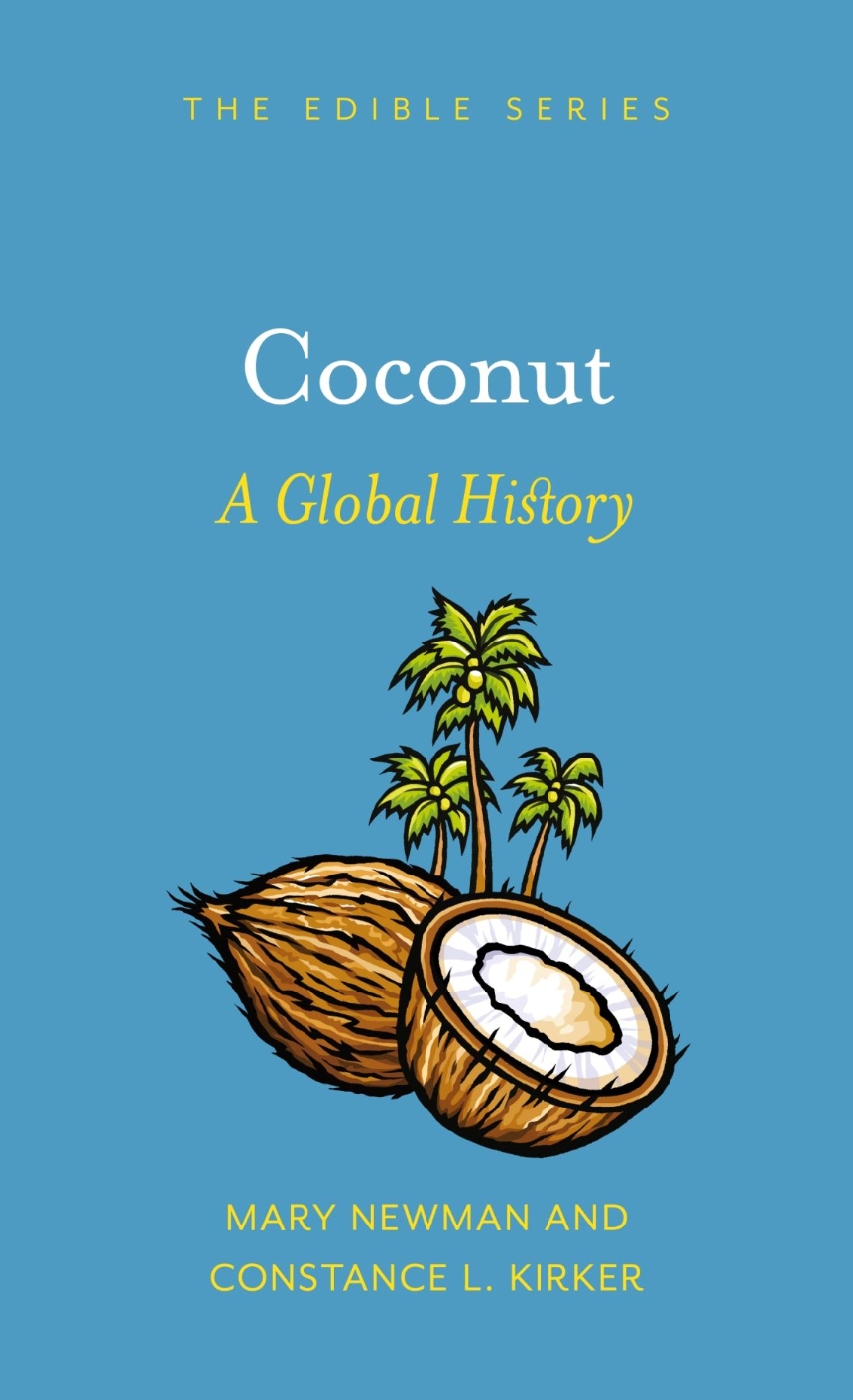 From curries to creamy piña coladas, a delectable global history of the many culinary incarnations of the coconut.

The flavor and image of the coconut are universally recognizable, conjuring up sweet, exotic pleasures. Called the “Swiss army knife” of the plant world, the versatile coconut can be an essential ingredient in savory curries, or a sacred element in Hindu rituals or Polynesian kava ceremonies. Coconut’s culinary credentials extend far beyond a sprinkling on a fabulous layer cake or cream pie to include products such as coconut vinegar, coconut sugar, coconut flour, and coconut oil. Complete with recipes, this book explores the global history of coconut from its ancient origins to its recent elevation to super-food status.

"A beautifully written and important book."

"Coconut is an edible adventure! Entertaining, knowledgeable, and fun to read. . . . [A] gem of a book."

The word ‘coconut’ conjures up visions of palm trees, cocktails and sunsets, instantly transporting us to a golden beach with blue skies and bluer water, a sweet cocktail in one hand and coconut-scented sunscreen slathered all over us. What could be more fun, engaging, interesting or seductive even, than writing about the coconut?

The image of the coconut palm is often paired with other fascinating and strange images, from pagodas to pink flamingos, but always in a delightful way. Hawaiian, or ‘aloha’, shirts invariably feature coconut palms and are worn untucked, signalling a casual attitude of freedom in the wearer, declaring ‘I am on holiday!’ Former U.S.. President Barack Obama, responding to a question about his future plans after he left office, said he could be found ‘on a beach somewhere, drinking out of a coconut’.

For those living in the ‘Western’ world, which has a temperate climate in which coconut palms, by and large, simply cannot grow, the image, taste and, of course, smell of coconut is intriguing and extraordinary. Where coconut palms are abundant, they are much more than a sustaining food source. Where they are plentiful, people often remark that each household consumes at least one coconut daily and, in fact, a common saying is, ‘without coconut there is no life.’ Yet, for that very reason, the coconut seems to be taken for granted. People are surprised and dismayed to discover that the popularity of their beloved coconut water as a trendy superfood around the world has made its price skyrocket at home.

Consumers everywhere can easily identify the smell, texture and taste of coconut. Bags of processed, grated coconut are readily accessible at extremely reasonable prices, as are cans of coconut milk, cream or water. Recipes prepared with processed coconut, such as coconut layer cake or coconut cream pie, and the familiar coconut chocolate bar favourites Bounty, Mounds and Almond Joy are much-beloved treats in places where coconut palms do not grow.

Hopefully, some sections of this book will provide a trip down memory lane for readers who may recall favourite
coconut recipes from the 1950s and ’60s, prepared with care and pride by mothers, grandmothers and aunts for special family occasions and church suppers. For example, the recipe for toasted coconut cream pie that has been enjoyed by the authors’ family and friends for years turned out to be a 1950s recipe from the Tavern Restaurant in New York City. So treasured was this dessert that in 1958, Herb Hubschman, the owner of Two Guys department stores, called an aide in his Newark, New Jersey, office and told her to send a Tavern coconut cream pie to him in Chicago, where he was attending a trade show. The aide bought a first-class aeroplane ticket for the pie and had it flown to Hubschman.

Many American readers may also have fond memories of ambrosia, not only the food of the Greek gods but the go-to salad or dessert for many a potluck or shared dinner. Variations of this popular dish now feature pineapple, marshmallows, cherries or sour cream, augmenting the simple oranges and coconut of the first-known recipes recorded in cookbooks as early as the 1870s. Treats from cakes to puddings to hard sweets make up a large portion of the recipes that use coconut. This is not surprising, since sugar cane and coconut are both easily available and inexpensive in the tropical locations where they are grown, but there are many savoury applications as well.

Searching for coconut in the cuisines of countries in which it is grown and consumed fresh offers a different taste experience from sampling the processed, dried and preserved product more familiar in the West. Comparing freshly prepared coconut milk or grated coconut to even the finest brands of canned or packaged products is like the proverbial ‘apples and oranges’ or ‘chalk and cheese’.

In places where the coconut grow freely, its extraordinary historical and cultural importance is acknowledged: for example, its use as prasad, or blessed food, in the Hindu tradition. Yet the culinary ingredient is so commonplace as to seem ordinary. Coconut is an essential element in many dishes of the spectacular feast known as a Sadya in Kerala, India. Coconut is so important in Sri Lanka, that couples who are engaged would never consider having a wedding without it.

A cultural history of the coconut is not simply a matter of consulting traditional Western cultural sources such as the Bible, classical Greek and Roman texts, or Shakespeare and the Western literary canon for coconut references. Discovering the early history of the coconut and its importance requires searching out a more diverse range of references, such as Polynesian mythology and Indian Hindu traditions. Many food preparations have alternative names and spellings when translated into English.

Notable references to the coconut in the Western literary canon include Herman Melville, James A. Michener, Somerset Maugham and Robert Louis Stevenson, who set their writing in the South Pacific and made use of the coconut palm as an evocative icon. The plot of the novel Mutiny on the Bounty, by Charles Nordhoff and James Norman, hinges on a stolen coconut. Coconut appears in popular culture tropes such as the Pink Coconut Ice sweet for sale in Honeydukes wizarding sweet shop in J. K. Rowling’s Harry Potter and the Prisoner of Azkaban.

Coconut has been aptly described as the ‘Swiss Army knife of the plant kingdom’. Unlike almost any other edible plant, there is virtually no part of the coconut tree or fruit that is not put to a useful purpose. In addition to being edible, parts of the coconut such as the shell, leaves and husks (coir) have broad utilitarian applications in cooking and growing food. Examples include cooking and serving utensils, and even as the fuel used to cook food. Research today focuses on finding additional ‘value-added’ uses in every area of the world where coconut grows, from Sri Lanka and the Philippines, to Africa and the Caribbean. Governments, producers and entrepreneurs are all striving to capitalize on the current trend of high interest in all things coconut.

Some sources suggest that the pure water of a coconut was used as a life-sustaining substitute for blood plasma in emergency situations in the Pacific theatre of the Second World War. Though a theoretical possibility, there are no documented examples. What is certain is that in 1943, the adaptability and value of coconut was key to the curriculum of a survival course for American pilots during the Second World War in the Pacific. The goal was to prepare them for the possibility of being forced down and the necessity of using local flora and fauna, including the ubiquitous coconut, to sustain themselves. Americans from the U.S. mainland, most of whom would never have experienced coconut or other tropical plants, were instructed in the many ways coconut could be used for weaving clothing, providing containers and constructing emergency shelter, in addition to providing a source of food and fresh drinking water. Coconut husks can be used to ignite a ground oven and so, to conserve matches, could also light the soldiers’ cigarettes.

One of the most famous coconuts in the world sits on John F. Kennedy’s desk in his presidential library, in Boston, Massachusetts, as a reminder of how he and his crew were rescued on a Pacific island after their torpedo patrol boat was sunk in 1943 during the Second World War. Kennedy had carved a message noting their location on this coconut and passed it on to two Solomon Islanders who, at great risk to themselves, carried the message to Allied troops. After two days of surviving with only coconuts as nourishment, help arrived, and the inscribed coconut remained with Kennedy until his death.

The coconut suggests metaphorical ways to understand the universe. Cook Island creation myths describe the cosmos as the hollow of a vast coconut shell, with the interior being the underworld and the outer shell being the upper world of mortals. The Malay use coconut as a device to express the meagre way in which humans understand their place in the world: ‘A frog beneath a coconut shell believes there is no other world.’ An expression from Zanzibar says, ‘A coconut shell full of water is a sea to an ant.’ An Indonesian expression employs the coconut to reflect an understanding of karma: ‘The lot of the coconut shell is to float, and the lot of the stone is to sink.’

Charles Darwin understood the universe in a more scientific and practical way: researching what was to become his famous theory of evolution while sailing on HMS Beagle to the Cocos (Keeling) Islands in 1836, he mentioned coconut many times in his observations, describing coconut milk as pleasant and cool. He noted that native pigs on the island grew fat on a diet of coconut and made references to the coconut, or robber, crab and what was believed to be its aphrodisiac qualities.