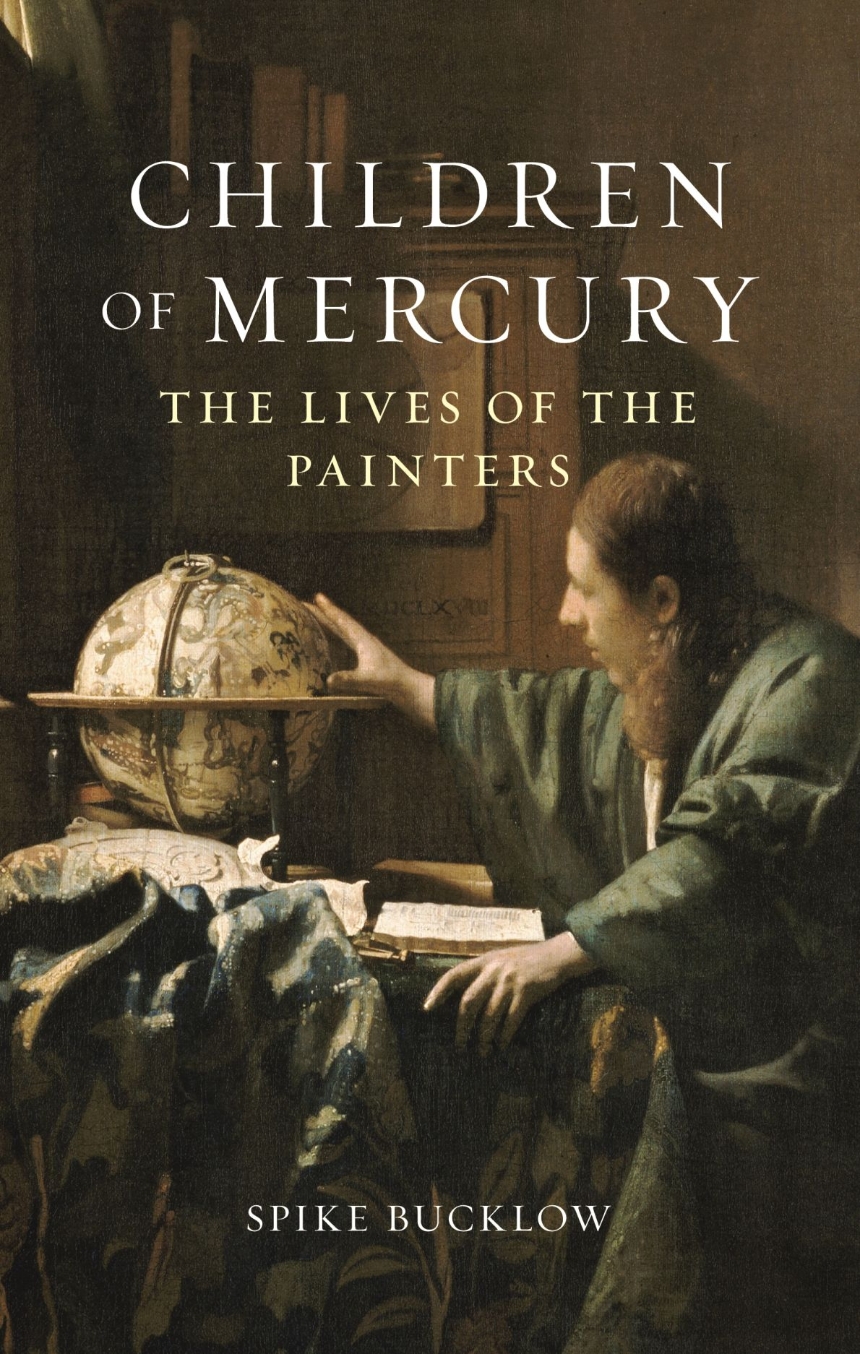 The Lives of the Painters

The Lives of the Painters

Following “the seven ages of man” from infancy to death, an innovative retelling of the lives of premodern painters both famous and forgotten.

Children of Mercury is a bold new account of the lives of premodern painters, viewed through the lens of “the seven ages of man,” a widespread belief made famous in the “All the world’s a stage” speech in Shakespeare’s As You Like It. Spike Bucklow follows artists’ lives from infancy through childhood, adolescence, and adulthood, to maturity, old age, and death. He tracks how lives unfolded for both male and female painters, from the famous, like Michelangelo, through Artemisia Gentileschi and Mary Beale, to those who are now forgotten, like Jehan Gillemer. The book draws on historic biographies, the artists’ writings, and, uniquely, the physical evidence offered by their paintings.

“Bucklow offers a deeply humane poetics of the life-cycle and artistic creativity that is enchanting and original. This beautifully written book is an enormously rewarding read for anyone interested in art history.”

“While there have been studies of prodigies and of aging artists, Bucklow's book is distinctive in looking systematically at the periods in between. It also stands out within this literature for devoting real attention to women as well as men.”

This book looks at painters’ lives, guided by their paintings and writings, as well as other people’s stories about them. However, those painters are merely bit players in a story where the real stars are not the people in the foreground but seven hidden actors who operate, mysteriously, in the background. The lives of a few of the painters featured in this book are recorded elsewhere in other books, each dedicated to a single painter. For readers particularly interested in the lives of, say, Leonardo da Vinci or Rembrandt, I would recommend those books. Yet, because those accounts put one artist centre stage, they inevitably marginalize others. To greater or lesser extents, it is as if they treat Everest like a mountain that stands alone, rather than as one peak amid many other majestic peaks, all of which are surrounded by expansive foothills.

Here, episodes are taken from the lives of many painters – well known, middle-ranking and some whose names have almost been forgotten – and are presented thematically. The themes that link those episodes are provided by the seven hidden operators, each of which gives a particular focus or quality to a chapter. Although painters’ biographical details are scattered across the whole book, a lifelong narrative arc could be constructed for some – such as the well-documented Michelangelo and Titian – who feature in episodes under many themes or in many chapters. On the other hand, full narrative arcs are not possible for less well-known painters – such as Sarah Curtis and Martha Beard – who pop up in the historical record only occasionally, in tantalizing cameos. Yet all painters, known and otherwise, constitute the foothills out of which the peaks emerge, and they all throw light on what it was like to live and work in the medieval, Renaissance and early modern worlds.

This book considers how painters were seen in society and how they presented themselves in their pictures. For example, Velázquez showed himself as a dignified member of the Spanish court and his one-time assistant Juan de Pareja depicted himself in the company of Christ and St Matthew. (He’s at the left of the picture, looking out to meet our gaze.) At the other end of the scale, Adriaen Brouwer preferred to be seen as a lad having a good time with his mates down the pub, and Caravaggio gave his facial features to Goliath’s severed head. Artemisia Gentileschi showed herself personifying Painting itself. Yet, whatever image painters chose to fashion for themselves, outside the studio they were each subject to the same everyday realities that confront us all.

Like everyone, the great painters of history were born, grew up, worked, then retired from active life and, eventually, died. This book traces painters’ lives in stages, focusing not just on the time when art historians say they ‘flourished’. Prolific painters’ work can be divided into early, middle and late stages, but still, little attention is given to the periods before and after they were productive. This book looks at the ordinary details of their everyday lives because, as Plutarch said: ‘a slight thing like a phrase or a jest often reveals more character than
battles where thousands fall.’1 Or, as Horace Walpole said about a fly that Holbein painted on a portrait, ‘trifling deceptions’ often make ‘more impression than greater excellences’.2 Collected together, these small everyday details provide the human context in which great art was made and appreciated. Each painting becomes an achievement that a painter could have aspired to when young or pondered over in later life.

We all grow and age. However, our personal and professional highs and lows are quite different from the highs and lows in Rubens’s or Simon Verelst’s life and work, and the difference between our experiences and theirs is largely due to differences in our preoccupations and expectations. Medieval and early modern preoccupations about life, and expectations of life, were very different from ours, yet the broad cultural frameworks that helped shape them are well known. This book will consider the lives of historical painters in terms of one of the most important ideas about how people made their way from the cradle to the grave.

On the road outside Thebes it was said that there lurked a creature with a woman’s face, a lion’s body and bird’s wings. It preyed upon travellers, devouring those who could not answer its question. The solution to the Sphinx’s riddle (‘What creature moves on four legs in the morning, two at noon and three in the evening?’) rested on dividing human life into three stages. First we crawl, then we walk erect and eventually we hobble with the aid of a stick. Many other sub-divisions of life circulated in the ancient world and endured through to the early modern world. One of the most detailed involved seven stages, linking the trajectory of a person’s life to the seven planets or seven heavens – this book’s seven hidden operators. This idea was a harmonious blend of pagan and Christian traditions and was both extraordinarily sophisticated and very widely known, but to see exactly how the course of human life was supposed to be connected to the heavens we need to understand how our place in the cosmos was conceived.

For the medieval, Renaissance and early modern painter, Earth was at the heart of a perfectly designed universe. Earth was surrounded by the planets, meaning those heavenly bodies that appear to move across the backdrop of fixed stars. These were visible to the naked eye– the Moon, Mercury, Venus, the Sun, Mars, Jupiter and Saturn – and they moved in nested spheres, arranged like Russian dolls, enveloping Earth. The fastest planet – the Moon, which goes around us about every 28 days – was closest to Earth, and the slowest planet – Saturn, which orbits about every 28 years – was furthest from Earth. The Sun, which encircles us once a year, had a privileged position at the centre of the planets, with three above and three below. (Today we might protest that Earth goes around the Sun. But, as Einstein said, motion is relative, and we still refer to ‘sunrise’ and ‘sunset’ as if the Sun moves over us. In other words, everyday language suggests that our shared experience is more important than whatever we might have been taught in school about heliocentric planetary systems.)

The seven planets moved within the sphere of fixed stars, upon which the zodiac was inscribed, and that, in turn, was inside the primum mobile. The whole structure lay within the all-encompassing Mind of God. Each of the orbiting planets corresponded to a level of heaven, which was an expression of its relative distance from Earth or proximity to the Mind of God. Traces of their relative status survive today in sayings like being ‘in seventh heaven’ (in other words, in the orbit of Saturn, next to the stars), which is a more ecstatic state than merely being ‘over the Moon’ (or entering the first heaven, so still not too far from Earth). Exact details of the whole cosmic structure varied from one authority to another. Everyone agreed that Earth nestled at the heart of the universe, but opinions differed once one went beyond the sphere of fixed stars. However, those differences are not relevant to the way the heavens were supposed to be reflected in the gradual unfolding of every single person’s life on Earth.

The connection between the stages of life and the heavens, or planetary spheres, drew on many sources, including works by Plato and Cicero. According to Plato, a man called Er was killed in battle but miraculously came back to life when his body was about to be placed on the funeral pyre. He claimed that he had been to heaven, had been told to bear witness to the fate that befell the souls of the dead and then report back to the living. Cicero, writing three hundred years later, described how the Roman general Scipio Aemilianus was visited in his sleep by his adoptive dead grandfather, Scipio Africanus, who in a dream tried to put the Roman Empire and all human life into cosmic perspective. Both Plato and Cicero recounted the soul’s journeys and provided images of the universe as it was experienced before birth and after death. And, mainly through Macrobius’ enormously popular commentary on Scipio’s dream, these journeys became commonplace. Many may not have known where the idea came from, but they still knew it.