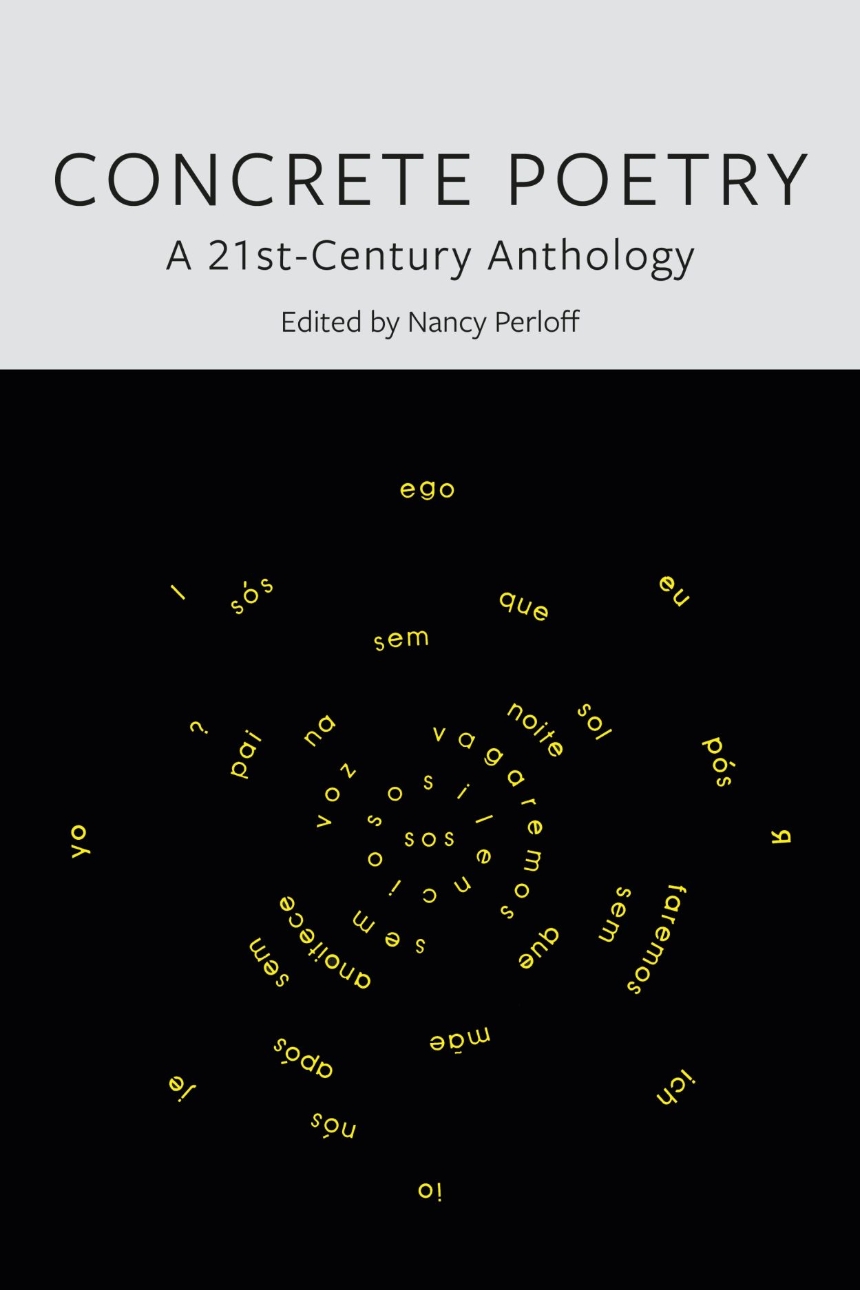 A significant new collection of concrete poetry that redefines what this unique literary movement means today.

Concrete Poetry: A 21st-Century Anthology is the first overview of concrete poetry in many years. Selective yet wide-ranging, this anthology re-evaluates the movement, singling out its most distinctive and influential works. Nancy Perloff, curator of an important Concrete Poetry exhibition at the Getty Research Institute, includes examples from the little-known Japanese concretists and the Wiener Gruppe—groups that, together with the Brazilian poet Augusto de Campos and the Scottish poet Ian Hamilton Finlay, have engaged with the most subtle possibilities of language itself—while also incorporating key poems by Eugen Gomringer, Dieter Roth, Henri Chopin, and others and including contemporary contributions by Cia Rinne and Susan Howe.

Perloff’s anthology presents individual poems, reproduced in their original languages, together with lively commentaries that explicate and contextualize the work, allowing readers to discover the intricacy of poems that some have dismissed as simple, even trivial, texts. This substantial new collection redefines what the concrete poetry movement means today.

"What is undoubtedly valuable about the book is the way that it carefully arranges, in a beautifully printed hardback, a selection of concrete poetry’s keystones. The first half of Perloff’s selection triangulates Brazil, Austria and Scotland through the work of three key figures: Augusto de Campos, Gerhard Rühm, and Ian Hamilton Finlay. For the anglophone reader, she glosses the foreign words involved, prising apart the heavy punning that sparked the concrete imagination."

"This is an exciting and engaging summary of an important and still misunderstood field, the value of which lies in the intelligence and sensitivity of Perloff’s close readings."

"Beautifully produced. . . . Whether you leap in and buy it or consult a library copy I think it's well worth your time. A book for poets, readers, and art lovers. Your own formally composed verses, on the still white page, ought to be ruffled, alarmed, and if not fully converted, at least have the 'look' of them excitingly challenged."

“Perloff's lively style and tone in this book help to give new life to old forms, conveying something of the sense of adventure felt among those of us still young enough to remember being part of this postwar cultural movement. Written in a highly accessible way, with a fine choice of accompanying poems, it's a book to generate new interest as well as to inform existing initiates.”

"This new anthology is to be welcomed. It features a wide range of international poets who contributed to the movement, and displays prime examples of their poetic output in its original setting. Perloff offers personal commentaries on the individual poems, and provides a historical introduction which also conveys her belief in the enduring legacy of the movement."

"This wonderfully rich anthology reveals the experimentation and internationalism of concrete poetry and its continuing significance. Perloff’s fresh selection, including the work of poets from Austria and Japan, offers scholarly insight alongside helpful notes to each poem."

"This groundbreaking book finally legitimizes one of the most important—yet most neglected—strains of contemporary poetic practice. By rigorously framing concrete poetry within a critical discourse, Perloff forcefully positions concrete poetry as essential to understanding our digital world. More than a mere history or a survey, Concrete Poetry’s landmark achievement signifies an essential reshuffling of the historical deck."

The term ‘concrete poetry’ refers both to a poetic genre and to the international movement that first emerged in Brazil and Austria in the early 1950s. Concrete poetry must be distinguished from visual poetry, a more general term for poems that focus primarily on the visual arrangement of language. Unlike concrete poetry, visual poetry can refer to a history as old as writing itself. In Johanna Drucker’s words, ‘Certainly the scribes who incised Egyptian hieroglyphics into the material substrate of walls and sarcophagi from about 2700 bc onward were sensitive to the visual arrangement of their signs.’

But today we understand visual poetry as a larger category that subsumes concretism. Indeed, some critics make the historical argument that the concrete poetry movement, so important in Europe, the United Kingdom and Asia from the 1950s until the 1970s, charted the territory for the visual poetry that followed it, even as concrete poetry itself fell away. An essential principle of concretism – ‘that language has a visual dimension and that the actual “look” of a poem on the page determines, at least in part, its meaning’ – became central to visual poetics as practiced in the late twentieth century and today. Typewriter art, a subset of visual poetry, creates images composed of brackets, dashes, slashes and asterisks, as well as other forms of graphic art, all by manipulating the keyboard and the typewriter roller.

At the opposite end of the spectrum from visual poetry lies the genre of sound poetry, which alters the characteristic relationship between sound and sense by ‘multiplying, reducing, or denying semantic reference, while expanding the phonetic and aural properties of language’. Although sound poetry has been present throughout the history of Western literature and has origins in the vast array of poetry, chant structures and syllabic mouthings still alive among many North American, African, Asian and Oceanic peoples, its immediate origins can be traced to the international network of the European avant-gardes.

Like concrete poetry, sound poetry is a hybrid form working across media. Yet an effective analysis of a sound poem’s text, as opposed to that of a concrete poem, must consider its realization in live performance and hence the very nature of its sounds – their intelligibility, their relation to other sounds in the poem, their use of the pronunciation of a particular spoken language, their role in articulating structure. Sound poetry does not privilege meaning, and in performance we hear its probing of the limits of referentiality.

All the poets in this anthology would no doubt agree with Rosmarie Waldrop’s basic definition, ‘Concrete poetry is a revolt against the transparency of the word.’ And it ‘is a poetry that makes the sound and shape of words its explicit field of investigation’. But, beyond such basics, what have been the defining features of concrete as put forth by the poets themselves?