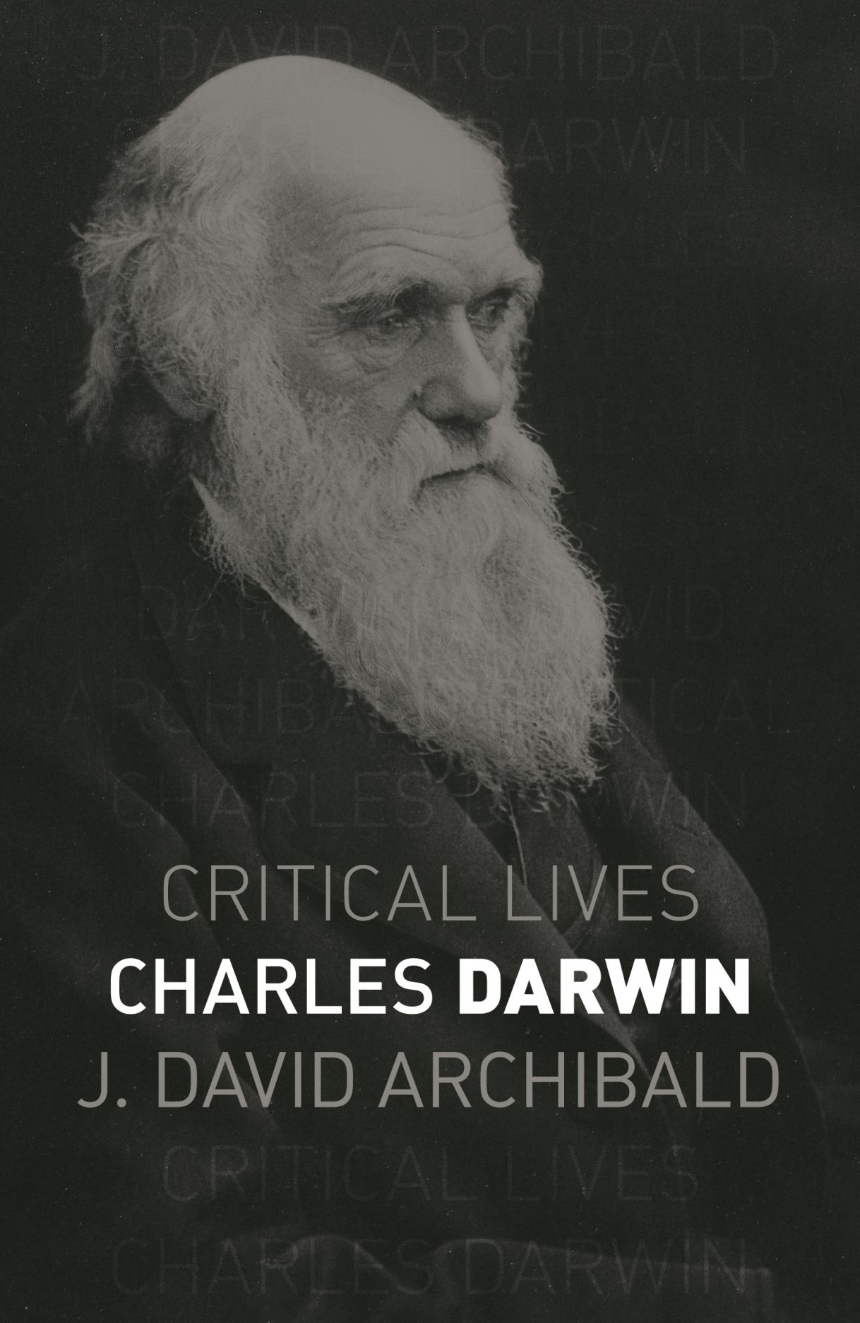 A fresh account of Charles Darwin’s rich personal and professional lives, well beyond On the Origin of Species.

In 1859 Charles Darwin published On the Origin of Species. With this bedrock of biology books, Darwin carved a new origin-story for all life: evolution rather than creation. But this single book is not the whole story. In this new biography, J. David Archibald describes and analyzes Darwin’s prodigious body of work and complex relationships with colleagues, as well as his equally productive home life—he lived with his wife and seven surviving children in the bustling environs of Down House, south of London. There, among his family and friends, Darwin continued to experiment and write many more books on orchids, sex, emotions, and earthworms until his death in 1882, when he was honored with burial at Westminster Abbey. This is a fresh, up-to-date account of the life and work of a most remarkable man.

"A readable overview on the life of Charles Darwin."

"Archibald’s book on Darwin, skillfully narrated and full of useful information, is a worthy addition to student courses and research or personal libraries. Though the book lacks a timeline and index, it’s easy to navigate, divided into 11 manageable chapters."

"This concise biography of Charles Darwin narrates the major events in the great naturalist's life. . . . Archibald focuses on Darwin's strenuous effort as he worked on his evolution book and the influential role Alfred Russel Wallace played in prompting Darwin to publish his ideas on the subject. Archibald also discusses Darwin's health problems, such as heart palpitations, nervous exhaustion, and digestive difficulties without indulging in speculation about possible psychological causes of these afflictions as some authors have done. . . . . The text is well documented and includes excellent illustrations. . . . Highly recommended."

“Don’t let the slender stature of this book fool you. This is a powerful and authoritative guide to the complex and often misrepresented life and work of Charles Darwin. Archibald has mastered the sources and takes his readers on an extraordinary journey.”

A large Georgian home stands on a rise above the River Severn just outside the town of Shrewsbury, in Shropshire, England. Today it houses the Valuation Office Agency, which as the name suggests values properties for the purpose of taxation. Built in 1800 and known then as the Mount House or The Mount, it was to play a much greater role in history than its present pedestrian use. It was the birthplace of Charles Robert Darwin on 12 February 1809, the co-discoverer of natural selection, the powerful mechanism that controls most evolutionary change. Darwin came from a family of considerable accomplishment well before he ever made indelible marks on biology and humans’ perception of their place in nature.

Charles Darwin’s paternal grandfather, Erasmus, was a well-known and well-respected physician, natural philosopher (precursor to scientist) and poet. He completed his undergraduate studies at the University of Cambridge and then his medical training at the University of Edinburgh, where his son Robert and his grandson Erasmus ‘Ras’, but not his other grandson Charles, completed their medical training. For more than fifty years Erasmus maintained a very lucrative medical practice in Lichfield in the West Midlands. Some of his writings clearly advocated a Lamarckian form of evolution, even before Lamarck, in which a parent acquires characteristics during its lifetime through use or disuse that are in turn passed along to its offspring. His primary works advocating this theory included his Zoonomia (1794–6) and The Temple of Nature (1803). His grandson Charles Darwin certainly knew of his grandfather’s genteel dabbling in evolution, acknowledging him in his historical sketch in later editions of On the Origin of Species as a precursor to his own evolutionary theorizing. The two never met; Erasmus died seven years before Charles was born.

Erasmus helped found the Lunar Society, an influential group in the region around Birmingham, England, whose members were natural philosophers, intellectuals and early industrialists. The name of the society derived from the group meeting each month on the full moon, allowing them better light for travelling at night. He also was a friend and correspondent of Benjamin Franklin during Franklin’s second mission to England between 1764 and 1775 before the War of Independence. Erasmus married twice and fathered at least fourteen children. His children include two illegitimate daughters by an employee, with rumours that he fathered yet another child by a married woman. Erasmus was a vocal advocate of formal, school-based education for women, even though his behaviour towards women might seem less than honourable.

In the 1790s Erasmus was in his mid-sixties with a stellar reputation as a physician and as a poet known around the country. Patients came from as far away as London. One client in particular, with a cousin who worked as a governess in the Royal Household, raved about her care from Erasmus Darwin. When word reached King George III of the governess’s medical treatment he asked if Erasmus might not come to London, serving as the king’s physician. Erasmus demurred, as he was already, owing to his increasing age, shrinking his practice and reducing his visits to local patients.

Robert Waring Darwin, father of Charles Robert Darwin, was the fourth child of Erasmus and Mary Darwin. He received small inheritances from his father and various family members which he used wisely, including construction of The Mount in 1800. He received rents from buildings he owned in Shrewsbury and invested in ventures such as the London to Holyhead Road and the Trent and Mersey Canal, both proving successful projects amid the industrialization of England. Like his father Erasmus, Robert was a very successful physician who showed great care to his patients. Also, and even more so than his father Erasmus, although 188 centimetres (6 ft 2 in.) tall, Robert became very corpulent, at 150 kilograms (330 lb) when he last allowed himself to be weighed. As other physicians of the time, especially those outside of large cities, Robert regularly used a gig, the favoured two-wheeled one-horse carriage, to visit patients in their homes. Because of his size, his coachman was sometimes obliged to test the floorboards in the homes, especially of poorer patients, lest they not support his weight. Probably with a loving tongue-in-cheek, Charles later in life referred to his father as ‘the largest man I ever knew’. Although putting on a bit of extra weight in middle age, the 6-foottall Charles did not follow in his father and grandfather’s girth, probably owing to the debilitating stomach ailments he suffered during much of his adulthood.

Charles Darwin’s maternal grandfather Josiah Wedgwood was also a member of the Lunar Society and friend of Erasmus Darwin. In 1759 Josiah founded what became Josiah Wedgwood & Sons, the famous pottery manufacturer. He was known for his systematic experimentation to improve his products. He produced high-quality items for the expensive tastes of high-society clients and also made less expensive versions to appeal to a broader, less sophisticated market.

Both the Darwins and Wedgwoods were staunchly anti-slavery, which Charles, through his upbringing, certainly also learned to be. Josiah Wedgwood mass-produced the small medallion that would become famous for its motto ‘Am I Not a Man and a Brother?’, below a pleading, shackled African man. The parliamentary leader for the abolition of slavery, William Wilberforce, and Josiah Wedgwood corresponded numerous times regarding this national issue. Wilberforce even visited the Wedgwood home Etruria Hall. In a twist of fate, many years later Wedgwood’s grandson Charles and Wilberforce’s son Samuel, later a bishop, became bitter enemies over Darwin’s evolutionary work. Samuel Wilberforce was probably a key player in denying Darwin a knighthood.

Susannah ‘Sukey’ Wedgwood, mother of Charles Robert Darwin, was the first child of Josiah and Sarah Wedgwood. She is described as popular, spirited and intelligent, and she and her father were particularly close. She was educated both at home and at a boarding school. The 29-year-old Robert Waring Darwin and 28-year-old Susannah were engaged in 1794 and married in 1796. Robert’s father Erasmus and Susannah’s father Josiah had been friends for many years, so the match of the two young people was not a surprise.

Robert and Susannah had six children – Marianne (1798), Caroline Sarah (1800), Susan Elizabeth (1803), Erasmus Alvey ‘Ras’ (1804), who was named after their paternal grandfather, Charles (1809), and the youngest, Emily Catherine (1810). A charming chalk portrait of Emily Catherine and Charles shows Charles clutching in his interlocked fingers a pot probably containing the perennial Lachenalia, portending his future as a naturalist. Only the four older Darwin children had many memories of their mother, because Susannah died aged 52 of an undetermined stomach ailment, possibly stomach cancer or a greatly inflamed ulcer. Only eight years old when she died, Charles would later recall little more than his mother’s deathbed and her black gown. After their mother’s death, Charles and his sister Emily Catherine, who was only a year younger than Charles, were cared for by his older sisters. Charles’s connection to his maternal relatives would prove a powerful force even after his mother’s death, because her brother Josiah Wedgwood ii and his large family of nine children lived some 48 kilometres (30 mi.) to the northeast at Maer Hall, a place where Charles often visited and stayed. What would prove even more profound in Darwin’s life was his 1839 marriage to his first cousin, Emma, the youngest of the Wedgwood children – but that was still more than twenty years in the future.

Most of the Darwin and Wedgwood families, including Charles’s grandfathers Erasmus Darwin and Josiah Wedgwood, practised Unitarianism, considered then even more so than now as quite liberal, rejecting doctrines believed by most other Christian denominations such as the Bible’s infallibility, original sin and predestination. A phrase common in both families and often attributed to Charles’s grandfather Erasmus called Unitarianism ‘a featherbed to catch a falling Christian’. Some, such as Charles’s mother Susannah, attended the Unitarian Chapel on High Street in Shrewsbury, but also kept a firm foot in the Church of England; Susannah had Charles baptized at St Chad’s, Shrewsbury, in 1809. Susannah as well as Charles’s father Robert and sisters Emily Catherine and Susan are buried there. As a very young boy Charles attended services at St Chad’s with his mother and then after her death he attended the High Street Unitarian Chapel with his older sisters. Both Charles and his older brother Ras were christened in the Church of England, knowing full well that if they wished to attend the universities of Oxford or Cambridge, membership of the Church of England was a prerequisite along with being a white male and subscribing to the Thirty-nine Articles of Religion, the statements of doctrines and practices of the Church.