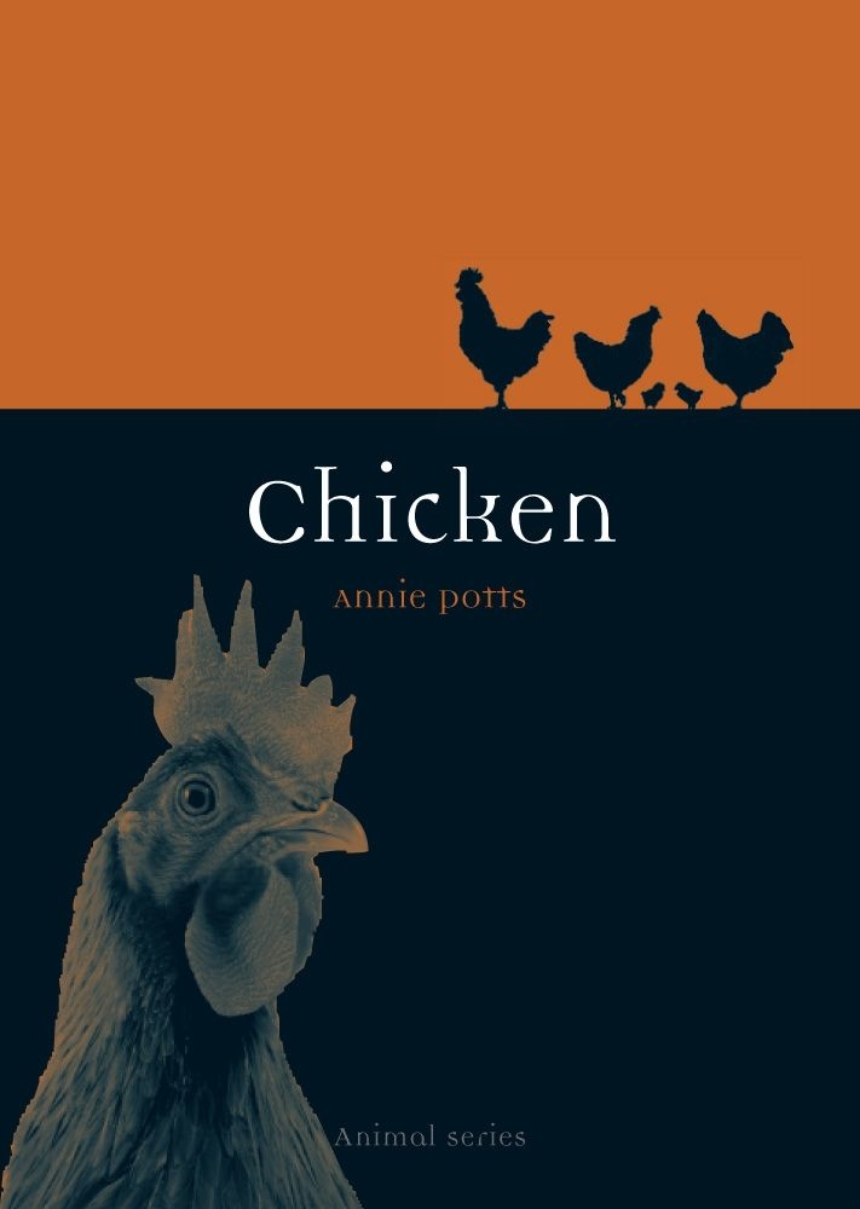 No creature has been subject to such extremes of reverence and exploitation as the chicken. Hens have been venerated as cosmic creators and roosters as solar divinities. Many cultures have found the mysteries of birth, healing, death and resurrection encapsulated in the hen’s egg. Yet today, most of us have nothing to do with chickens as living beings, although billions are consumed around the world every year.
In Chicken Annie Potts introduces us to the vivid and astonishing world of Gallus gallus. The book traces the evolution of jungle fowl and the domestication of chickens by humans. It describes the ways in which chickens experience the world, form families and friendships, communicate with each other, play, bond, and grieve. Chicken explores cultural practices like egg-rolling, the cockfight, alectromancy, wishbone-pulling and the chicken-swinging ritual of Kapparot; discovers depictions of chickenhood in ancient and modern art, literature and film; and also showcases bizarre supernatural chickens from around the world including the Basilisk, Kikimora and Pollio Maligno. Chicken concludes with a detailed analysis of the place of chickens in the world today, and a tribute to those who educate and advocate on behalf of these birds.
Numerous beautiful illustrations show the many faces (and feathers and combs and tails) of Gallus, from wild roosters in the jungles of Southeast Asia to quirky Naked-Necks and majestic Malays. There are chickens painted by Chagall and Magritte, chickens made of hair-rollers, and chickens shaped like mountains. The reader of Chicken will encounter a multitude of intriguing facts and ideas, including why the largest predator ever to walk the earth is considered the ancestor of the modern chicken, how mother hens communicate with their chicks while they’re still in the egg, why Charlie Chaplin’s masterpiece required him to play a chicken, whether it’s safe to take eggs on a sea-voyage, and how “chicken therapy” can rejuvenate us all. This book will fascinate those already familiar with and devoted to the Gallus species, and it will open up a whole new gallinaceous world for future admirers of the intelligent and passionate chicken.

“Few animals have been more wholly absorbed into human awareness (and use) than chickens, and yet Potts helps us see them with new understanding. She explains the tiny adjustments that occur within a viable egg—the way the embryo positions itself, before hatching, to hear its own heartbeat and the sounds of the world outside the egg. And she gives the reader a vivid sense of how the world looks to chickens, which ‘can obtain a clear view of morsels immediately in front of them on the ground while simultaneously receiving a panoramic view of the more distant environment.’ Plus, Potts notes, each eye is able to focus independently and at different distances, something you’ll want to remember the next time you try to catch a rooster on open ground.”