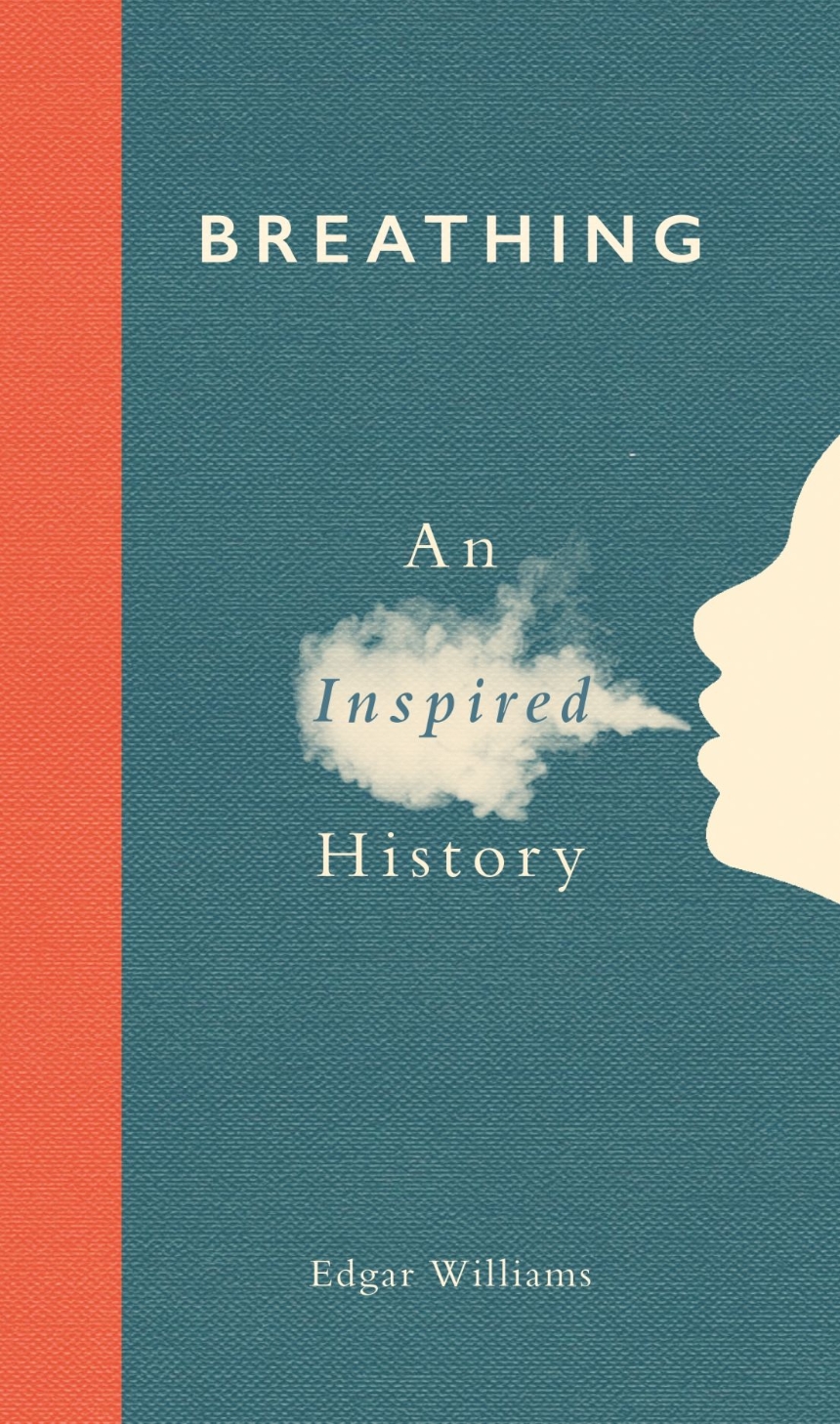 Our knowledge of breathing has shaped our social history and philosophical beliefs since prehistory. Breathing occupied a spiritual status for the ancients, while today it is central to the practice of many forms of meditation, like Yoga. Over time physicians, scientists, and engineers have pieced together the intricate biological mechanisms of breathing to devise ever more sophisticated devices to support and maintain breathing indefinitely, from iron lungs to the modern ventilator. Breathing supplementary oxygen has allowed us to conquer Everest, travel to the Moon, and dive to ever greater ocean depths. We all expect to breathe fresh and clean air, but with an increase in air pollution that expectation is no longer being met. Today, respiratory viruses like COVID-19 are causing disasters both human and economical on a global scale. This is the story of breathing—a tale relevant to everyone.

"An expansive piece of scholarship that explores the wild and often weird history of our most essential biological function."

James Nestor, author of the New York Times-bestselling "Breath: The New Science of a Lost Art"

Breathing is life. Day in and day out, with little thought, we quietly breathe to and fro, our chests rhythmically expanding and falling. Drawing breath is one of the first and last things we do; it is influenced by our emotions, behaviour and activity. Often we notice a change in breathing only during periods of ill health. Respiratory diseases, whether the common cold or asthma, make breathing harder. Breathing permeates our culture and is part of the human experience. Many of our greatest scientists and intellectuals have contributed to our understanding of this simple but complex process. Since Neolithic times the act of breathing has provided a spiritual link to the mystery of life.

Breathing is automatic; we inhale and exhale, ad mortem. Nowadays we all know the purpose of breathing: as young children we are told that breathing fulfils our requirement for ‘air’. Only later, as our education progresses, do we discover that this ‘air’ is oxygen, the essential gas that keeps us alive and vital. Finally, we learn of breathing’s dark side: the ‘evil’ carbon dioxide, a toxic by-product of cellular metabolism, a gas poisonous to our cells, a gas we must constantly expel to stay alive. While the ancients understood that we need to breathe, they had no idea why. The concepts of air and gas were unknown to them and the anatomy and physiology of lungs were a mystery. Without modern understanding, breathing was considered a spiritual process, connected with the vital forces of life.

The quest to understand breathing has played a large part in human culture and history. Breathing has been central in the development of many of the world’s religions and philosophies, and to the understanding of our physical and chemical environments. It has stimulated industry, invention, innovation and imagination.
Early Breathing
Breathing has played a pivotal role in our evolution. Over time it has allowed the development of subtle differences and changes in the stature and function of our ancestors, including our distant, now-extinct human relatives such as the Neanderthals and Denisovans. Altering the way we breathe has allowed our society to develop agriculture and industry. Respiration, the act of breathing, is mentioned in the earliest written histories, with the Greeks being among the first to question its purpose. For these early civilizations, breathing was an ethereal and spiritual phenomenon. It stood for a force of nature or represented God; it was a presence, an embodiment of the Holy Spirit. In the Christian Bible, in Genesis, which marks the beginning of human consciousness, God provides humans with breath as a climax to the formation of the universe and earth. Genesis states that on the sixth day of creation, God created humankind: He ‘formed the man from the dust of the ground and breathed into his nostrils the breath of life, and the man became a living being’ (Genesis 2:7). Thus Adam was born. Many centuries later, this divine association was expressed by the scientist Charles Darwin in the closing paragraph of his famous book on evolution, On the Origin of Species by Means of Natural Selection (1859):
There is grandeur in this view of life, with its several powers, having been originally breathed by the Creator into a few forms or into one; and that, whilst this planet has gone circling on according to the fixed law of gravity, from so simple a beginning endless forms most beautiful and most wonderful have been, and are being evolved.
For millennia, the belief in the spiritual role of breathing persisted. The first to expand on this spiritual role were the Greeks, who postulated that breathing supplied a substance called pneuma, the spiritual essence of life. This concept lasted into the sixteenth century. The medieval period saw the appearance of the first pharmacopoeia, or herbals, which provide intricate descriptions of concoctions and potions to treat respiratory disorders such as colds, asthma and tuberculosis. At first the active ingredients came from common indigenous plants but, with global exploration, they came increasingly to Europe from Asia and the New World. When these were combined with new chemical methods, the first man-made medicines were created. Although primitive, these new medicines gradually led to the view that breathing had an organic basis, supporting the idea that disease was caused by an imbalance of the humours.

At the beginning of the Renaissance in fifteenth-century Europe, human anatomists such as Leonardo da Vinci began to explore the body in greater detail and note the structure of the lungs. These intricate observations suggested to anatomists that the lungs had been ‘designed’ for a purpose beyond the containment of pneuma. The mechanistic view of breathing was born. At first only the lung’s gross anatomy was defined, but after the invention of the microscope in the late sixteenth century, the Italian Marcello Malpighi became the first to observe and describe the minute structure of the lungs, albeit in frogs, describing for the first time the true functional unit of the lungs, the alveolus. It is this small bag-like structure wherein gas exchange takes place, where oxygen enters the blood and carbon dioxide moves in the opposite direction, from the blood into the air filling the alveoli. Parallel to these discoveries were great advances in the understanding of the physics and chemistry of air. The relationship between pressure and volume began to be elucidated, leading to further experimentation that showed ‘air’ existed in many forms and was not a single ubiquitous entity but consisted of mixtures of gases. This was a huge conceptual leap forward in our comprehension of the world. Eventually these mixtures were reduced to their elemental and chemical forms, with the discovery of gases such as nitrogen, oxygen and carbon dioxide. With the dawning of the Victorian age and the industrialization of society, the finer details of how breathing works began to be elucidated as improvements in technology allowed the construction of better scientific instruments. The age of the professional scientist began, first in Europe, for example in Germany and Denmark, then in Scotland and finally in England. The final great breakthroughs came in the twentieth century with the two world wars, both of which instigated tremendous advances in technological industries such as aviation, diving and space travel.

Breathing-associated diseases have been a constant companion of humankind throughout our history and have taken many centuries to understand. As factual discoveries on the anatomy, biology and chemistry of breathing progressed and multiplied, this knowledge was applied to understanding the pathology of disease, whether acute or chronic, whether infectious or forming spontaneously, such as asthma. With the discovery of germs, bacteria and viruses came the realization that airborne disease was not transmitted by miasmas and ephemeral spirits. With industrialization came air pollution, and it soon became clear that breathing clean air was important in maintaining good personal and public health. The history of how these discoveries were made show how serendipity, and sometimes genius, contribute to today’s environment and culture, which are still blighted by air pollution and iatrogenic or man-made respiratory disease.

The Evolution of Breathing
Active breathing common among animals of all sizes, be it fish, bird or mammal, including ourselves. It is easy to observe, this physical and mechanical process that requires specialized organs such as lungs or gills, however primitive. Slugs and snails breathe via the pneumostome, a flap that slowly opens and closes once or twice a minute, each time trapping air inside a single lung, a moist empty space. Frogs are well known for gulping air and expanding their cheek pouches while breathing. In humans, breathing can easily be observed as the chest rises and falls. The act of breathing is a vital life-giving process and its evolution stretches back many hundreds of millions of years to the Cambrian period at the beginning of the Phanerozoic era (around 600 million years ago), when the first multicellular organisms evolved. Before breathing could evolve, a breathable atmosphere was required. There was little oxygen in the early Earth’s atmosphere, and the first rise in the atmospheric oxygen levels occurred during the so-called Great Oxygenation Event (goe) at the beginning of the Proterozoic era, 2,500 million years ago. A second event occurred later, during the Phanerozoic era, when atmospheric oxygen levels settled at the 21 per cent we know today.

Breathing did not begin with the medium of air but with water, with which the first shrimp-like creatures ventilated their gills. The advantage of actively directing a flow of water over primitive gills is that it allows the dissolved oxygen in the water to be extracted in larger quantities than the passive uptake of oxygen by diffusion alone. This breathing method gave these creatures more energy, allowing them to grow bigger and faster than their passive-breathing contemporaries. Around 400 million years ago, ancient fish took the evolution of the gill further when a few species began to leave the water and breathe air instead. At first they became partial air breathers, moving between the air and water, finally evolving into full air breathers and leaving the aquatic environment behind. Further evolution led to the amphibians, reptiles, birds and mammals we know today, all of whom use lungs to breathe.