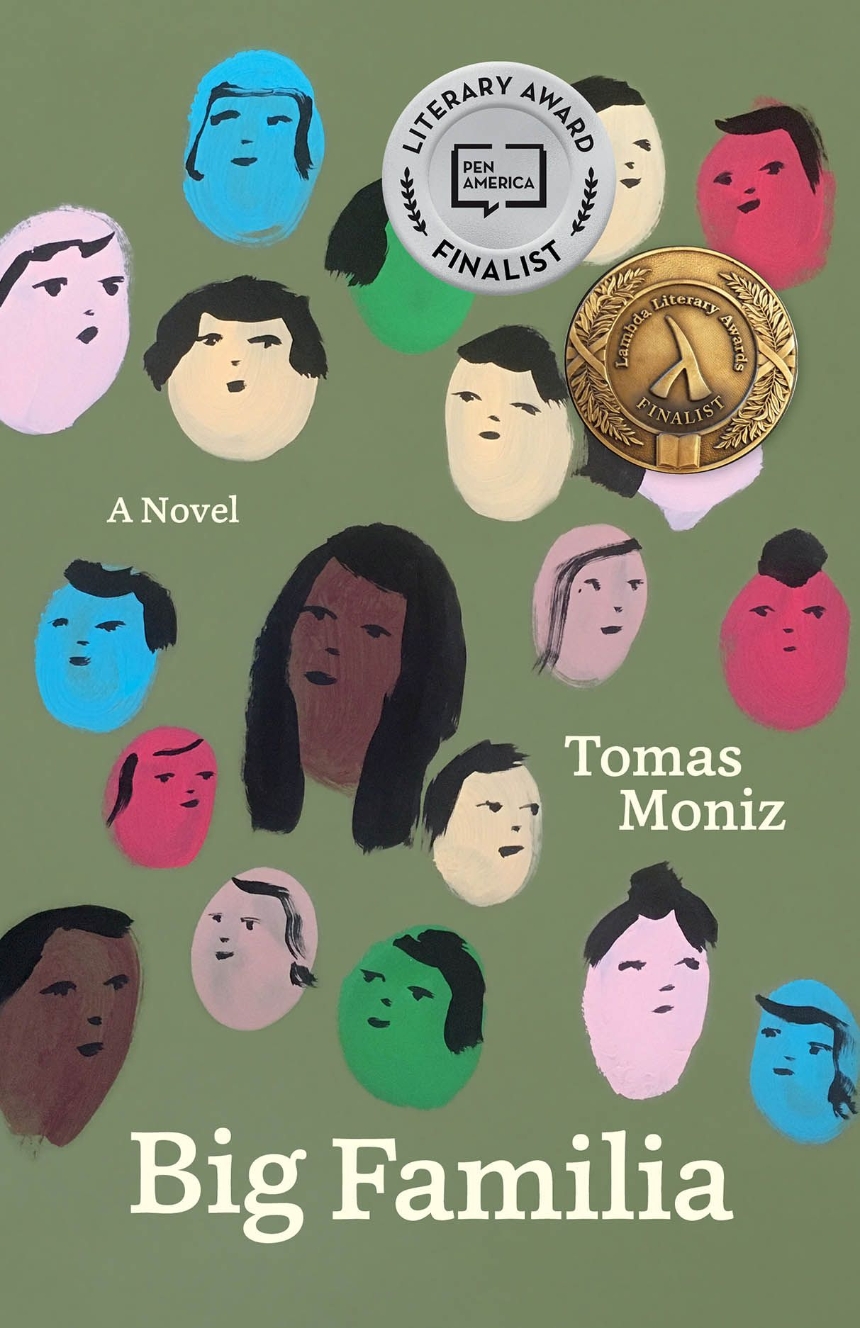 Big Familia follows Juan Gutiérrez, a self-employed single father, as he navigates a tumultuous year of inescapable change. His daughter, Stella, is on the verge of moving away to college; his lover, Jared, is pressing him for commitment; and his favorite watering hole—a ramshackle dive presided over by Bob the Bartender—is transforming into a karaoke hotspot. The story is set in a neighborhood that is also changing, gentrification inciting the ire of the established community.

Upon the unexpected death of one of the bar’s regulars, Juan is sent reeling, and a series of upheavals follow as he both seeks and spurns intimacy, pondering the legacy of distant parents and a failed marriage and grappling with his sexuality—all the while cycling and dating, drinking at Nicks Lounge, and parenting a determined and defiant child-become-woman.

When his incarcerated father dies and Stella reveals she’s pregnant, Juan is forced to examine the emotional bonds that both hold and hinder him, to reassess his ideas of commitment, of friendship, of love. His encounters with various characters—his mother, his ex-wife, a middle-aged punker, an aspiring acupuncturist, a dapper veteran—lead Juan to the realization that he himself must change to thrive.

This is a story of making family and making mistakes, of rending and of mending. As a Latinx queer father with a mixed-race daughter, Juan exemplifies the ways identity connects and divides us. With wit, insight, and tenderness, Big Familia explores the complexities of desire, devotion, and the mysteries of the heart.

"A quiet, thoughtful story about coming-of-age at middle age. . . . With his first novel, poet Moniz tells a story that is simultaneously timeless and quite timely. . . . Characters deal with and talk about racism and homophobia, gentrification and police brutality. These are some of the challenges they endure as they navigate universally human experiences like connection, community, birth, and death. . . . Diverse characters and a deeply likable protagonist make this a standout debut."

"This debut novel from Rad Dad ‘zine editor Moniz is a sweet look at a multilayered modern family and Juan’s possibilities at the precipice of his complicated life. Recommended for readers of domestic fiction with an urban/modern twist, like the works of Stephen McCauley."

"Moniz's first novel, Big Familia, captures the joys and uncertainties of family life in modern-day Berkeley. Published by Acre through the University of Cincinnati, it's a sharply observed exploration of empty nesting, gentrification, and intercultural intimacy. . . . Big Familia doesn't dish out big, steaming heaps of drama. Rather, it recounts the smaller moments where a few ill-chosen words can have far-reaching repercussions, such as filling out financial-aid applications with a former spouse or dealing with lacy underwear left on the bathroom floor. Juan wants to be a better parent, lover, and son, but isn't sure how. His miscalculations about romantic and familial love give the book a bittersweet undertone that mixes well with the narrative as a whole."

"Tomas Moniz’s ability to portray the complexity of the contemporary family in zines and short stories is legendary. And this long-awaited debut novel is everything fans have come to love in his work and more. Set in the gentrifying Bay Area, Big Familia is deeply personal and lyrical, at once exploring shame, the politic of care, and the meaning of belonging. These characters are people we know—awkward and bursting with all the hurt and love of being fully human. If you’ve never read Moniz before, you’ll be an instant fan. If you’re a longtime reader, you’ll be so happy to come home to this novel."

"Big Familia is about so many American families—intercultural, gay, straight, divorced but still loving each other with imperfect ferocity."