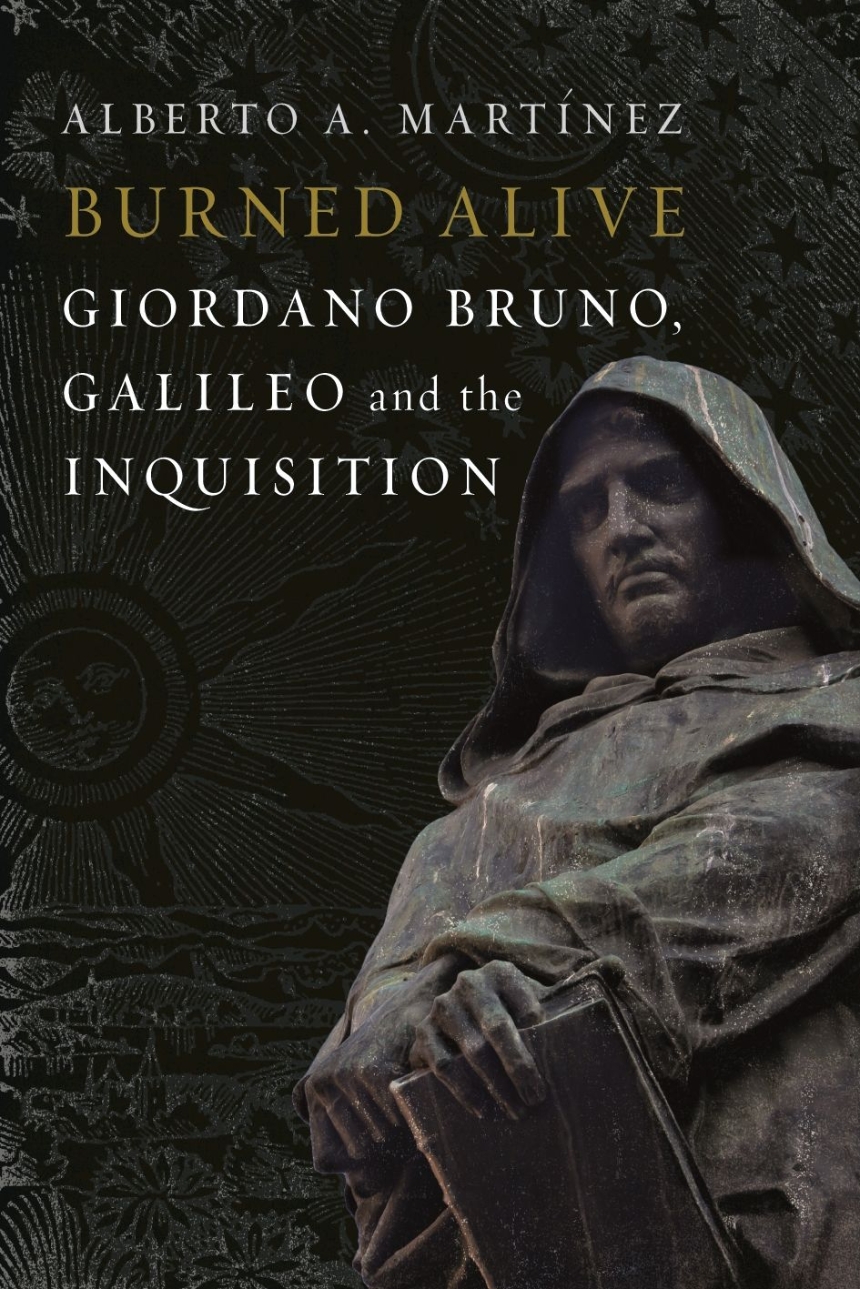 Bruno, Galileo and the Inquisition

Bruno, Galileo and the Inquisition

In 1600, the Catholic Inquisition condemned the philosopher and cosmologist Giordano Bruno for heresy, and he was then burned alive in the Campo de’ Fiori in Rome. Historians, scientists, and philosophical scholars have traditionally held that Bruno’s theological beliefs led to his execution, denying any link between his study of the nature of the universe and his trial. But in Burned Alive, Alberto A. Martínez draws on new evidence to claim that Bruno’s cosmological beliefs—that the stars are suns surrounded by planetary worlds like our own, and that the Earth moves because it has a soul—were indeed the primary factor in his condemnation.

Linking Bruno’s trial to later confrontations between the Inquisition and Galileo in 1616 and 1633, Martínez shows how some of the same Inquisitors who judged Bruno challenged Galileo. In particular, one clergyman who authored the most critical reports used by the Inquisition to condemn Galileo in 1633 immediately thereafter wrote an unpublished manuscript in which he denounced Galileo and other followers of Copernicus for their beliefs about the universe: that many worlds exist and that the Earth moves because it has a soul. Challenging the accepted history of astronomy to reveal Bruno as a true innovator whose contributions to the science predate those of Galileo, this book shows that is was cosmology, not theology, that led Bruno to his death.

"In his provocative new book, Martínez revisits the grim fate of Italian natural philosopher Giordano Bruno, who was burned at the stake in 1600. Bruno was an innovative thinker with unusual views on the nature of the universe; he believed that life on other worlds might exist, that the motion of planets was not perfectly circular, and that Earth itself had a soul. Many modern historians have argued that the Catholic Inquisition’s decision to sentence Bruno to death was not primarily about his cosmological views but about other heresies against Catholic teachings, such as his denial of transubstantiation. Martínez, however, draws on the Inquisition’s records to argue that Bruno’s cosmology was in fact the major reason that Inquisitors singled him out as a dangerous and heretical thinker. Burned Alive also shows that some of those same Inquisition personnel were involved in Galileo’s trial in 1633, which provides further evidence of the Inquisition’s interest in stamping out heresies about the cosmos."

"While the consensus by historians is that the 'myth' Bruno was martyred for his cosmological beliefs is false, Martínez in the deep research presented in this book has shown it to be true. I find his arguments compelling and conclusive, supported by previously overlooked or misinterpreted evidence. This is an essential text for any future research into Bruno, Galileo, and the Inquisition. In my view it is quite possibly the most important book of the year for the history of astronomy."

"Burned Alive is a book that all academic libraries should have. . . . A fascinating, well-written, and accessible contribution to the study of Bruno and Galileo, and a valuable contextualization of heliocentrism in the broader long-term intellectual continuities of the idea. . . . It represents a very useful historical case study in favor of the freedom of thought . . . [and] should prove very valuable in research and teaching."

"An innovative study linking Bruno’s and Galileo’s trials by the Inquisition, this book offers an impressively documented analysis of the 'Pythagorean' aspects of their thought, and their heretical implications for the Catholic theologians."

Hilary Gatti, author of "Ideas of Liberty in Early Modern Europe: from Machiavelli to Milton"

"Martínez offers an interesting and provocative reassessment of the relation between the condemnation of Giordano Bruno, who was burned at the stake, and the milder one that was meted out to Galileo."

William R. Shea, author of "Galileo Observed: Science and the Politics of Belief" and "Galileo in Rome: The Rise and Fall of a Troublesome Genius"