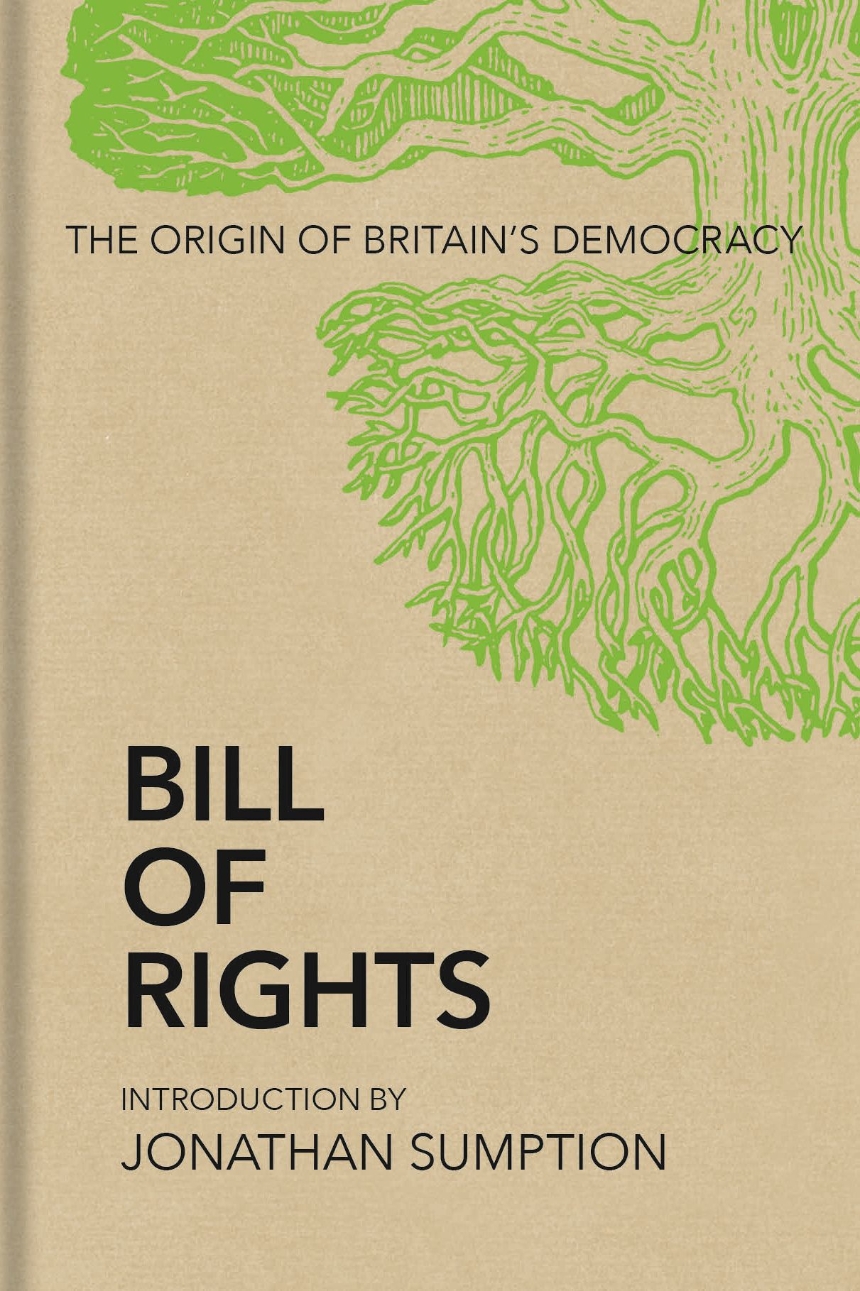 The Origin of Britain’s Democracy

With an Introduction by Jonathan Sumption

The Origin of Britain’s Democracy

With an Introduction by Jonathan Sumption

This edition of the English Bill of Rights is introduced by historian Jonathan Sumption.

After the UK Government attempted to trigger Article 50 of the Treaty on European Union in 2017, the Supreme Court ruled that the Government was unentitled to leave the EU without the consent of Parliament, directly citing the Bill of Rights in its judgment. Ironically, the Bill of Rights, enacted in 1689 to address abuses by the Crown, was successfully invoked in the twenty-first century to curb perceived abuse by Government, acting in the name of the Crown.

Passed shortly after the Glorious Revolution, the Bill of Rights sets out the balance of power between Parliament and the Crown, prohibiting the sovereign from levying taxes, recruiting troops, or suspending laws without Parliamentary consent. Establishing Parliament as the ultimate source of power in the land and enshrining basic civil rights first set out in Magna Carta but subsequently abridged, the Bill document can justly claim to serve as the origin of Britain’s democracy.

In this edition, an introduction by Jonathan Sumption provides the historical context of the document and its influence over the centuries—particularly on the United States Bill of Rights.

The Bill of Rights 1689 is the foundation of the British Parliamentary state. It followed the deposition of King James II, marking the victory of Parliament in its long struggle with the Stuart Kings. In one sense it was a backward-looking document, a response to the delinquencies of the Stuart Kings some of which are of purely historical interest today. In another, it led to the development of the principles which lie at the heart of Britain’s unwritten constitution to this day: that Parliament is the supreme organ of the state, and that the monarch’s ministers govern in the name of the Crown but are answerable to Parliament for all that they do. The Bill of Rights did not introduce democracy to Britain. That happened long afterwards with the gradual expansion of the Parliamentary franchise. But it provided the constitutional framework in which democracy was possible without a revolution. It was a large part of the reason for the remarkable political stability of Britain over the next three and a half centuries.

Seventeenth-century Englishmen believed in monarchy but also in a number of principles which can fairly be called republican. They believed in the dispersal of power. They believed in government by consent, expressed in a representative Parliament which alone could authorise the levying of taxes or a change in the law. They believed in the common law, which had begun to emerge at the beginning of the century as a conservative force, constraining the expansion of royal power. Religion was a critical part of the political identity of the English. The Church of England was established by law. The law upheld as privileged its doctrine and its rituals. But Protestantism was as much a political position as a religious one. The great majority of Englishmen associated Catholicism with an autocratic model of government exemplified by the absolute monarchy of Louis XIV of France, which they firmly rejected. ‘No popery, No slavery’ was the motto which the London MPs embroidered on their hat ribbons in Charles II’s last Parliament. (…)

The Bill of Rights was the first of a number of statutes enacted by a “Convention” which met on 22 January 1689 to fill the constitutional void left by the disappearance of James II. The Convention was not technically a Parliament. It had been summoned by William of Orange at a time when he was not yet King, on the authority of a group of privy councillors and members of the last Parliament of Charles II who happened to be in London. But the Convention was very like a Parliament. It was constituted by election of the Commons and personal summonses of the Lords in exactly the same way as a Parliament, and in due course declared itself to be one. The smell of technical irregularity always hung around the acts of the Convention, and to put the matter beyond doubt they were duly ratified by the next Parliament in 1690. (…)

The British constitutional model is almost unique. Almost every other country in the world has rejected the concept of unlimited legislative sovereignty. The United States led the way, with a constitution which was not only the first but the most influential. The US constitution is a code of fundamental law. It lays down limits to what even Congress can do. The President is directly elected and derives a large part of his authority directly from the Constitution, and not only from congressional legislation and congressional support. Congress may have no confidence in the President, but it cannot get rid of him short of impeachment for high crimes or misdemeanours. (…)

The British model was not challenged until quite recently. There was an almost complete consensus in the eighteenth and nineteenth centuries that Britain was a paradigm of constitutional excellence. The constitutional settlement of 1689 was viewed with uncritical reverence by Englishmen from the cautious reflections of Edmund Burke to the complacent prejudices of Dickens’ Mr Podsnap. Their veneration was shared by many foreign commentators, including those who came from countries which had adopted a very different constitutional model. American historians traced the values of their public life back to principles imported from England. French political scientists like Alexis de Tocqueville and historians like Elie Halévie looked to England as a haven of enlightened constitutional stability. It was only in the second half of the twentieth century that confidence in the British model began to wane. The past century has been an age of intensive government. The executive enjoys vast discretionary powers, far wider and potentially more intrusive than the prerogatives asserted by James II. Most of them have been conferred by statute, but in terms so general as to leave all the relevant judgments to ministers. At the same time, the power of the executive over the House of Commons has been enhanced by tighter party discipline, a larger payroll vote, and the emergence of a more presidential style of government as voters increasingly decided between candidates at general elections according to the perceived qualities of their party leader. People began to question the basic assumption of the revolutionaries of 1689 that the rights of the citizen were sufficiently protected by a combination of the common law and Parliamentary oversight. The consensus that once supported the Parliamentary state broke down. A division emerged between those who argued for a source of fundamental law superior to Parliament, with a higher degree of judicial oversight; and those who contended that only an elected legislature had the democratic legitimacy to perform these functions. One suggested answer to this last group has been a greater reliance on non-Parliamentary sources of consent, such as referenda or citizens’ assemblies.

The tension between these approaches has given a renewed relevance to the Bill of Rights and its legacy.