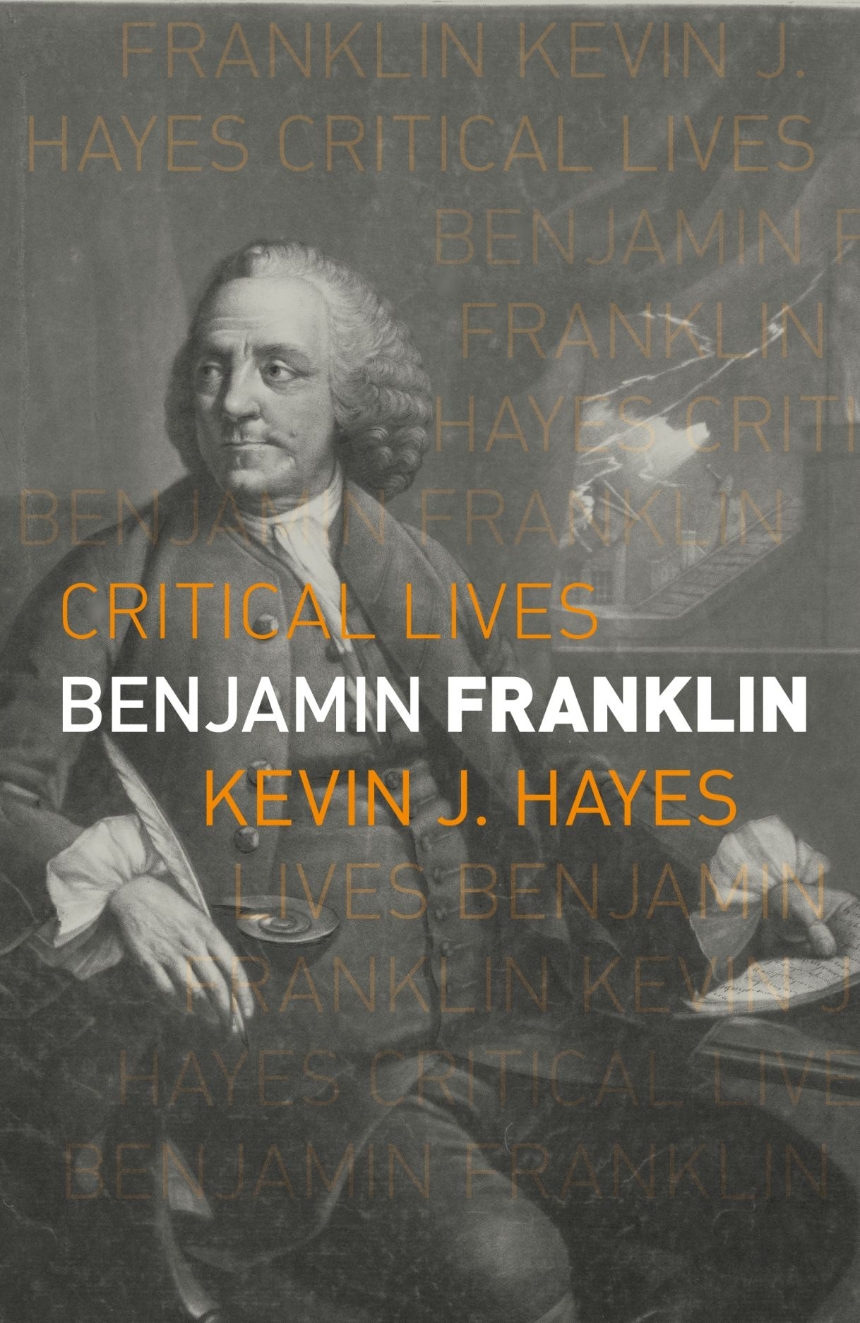 An action-packed retelling of the life and work of the polymath and so-called First American, Benjamin Franklin.

All Benjamin Franklin biographers face a major challenge: they must compete with their subject. In one of the greatest autobiographies in world literature, Franklin has already told his own story, and subsequent biographers have often taken Franklin at his word. In this exciting new account, Kevin J. Hayes takes a different approach.

Hayes begins when Franklin is eighteen and stranded in London, describing how the collection of curiosities he viewed there fundamentally shaped Franklin’s intellectual and personal outlook. Subsequent chapters take in Franklin’s career as a printer, his scientific activities, his role as a colonial agent, his participation in the American Revolution, his service as a diplomat, and his participation in the Constitutional Convention. Containing much new information about Franklin’s life and achievements, Hayes’s critical biography situates Franklin within his literary and cultural milieu.

“Hayes has given us an engaging companion to Benjamin Franklin’s Autobiography, and much more. From interesting stories and oft-omitted facts, Hayes weaves a rich and colorful tapestry of each act of a life that Franklin himself compared to a play. Informative and insightful, well-researched and marvelously comprehensive for its brevity, Hayes’s book is pound-for-pound one of the best introductions to our greatest American Founder.”

Benjamin Franklin casts a long shadow. In 1870, eighty years after Franklin’s death, Mark Twain wrote ‘The Late Benjamin Franklin’. With its homey epigraph, Twain’s essay reflects the lasting power of the saws and sayings from Poor Richard’s Almanack. Instead of repeating what Franklin says about procrastination – ‘Never leave that till tomorrow which you can do today’ – Twain spoofs it: ‘Never put off till tomorrow what you can do day after tomorrow just as well.’

Poor Richardisms focus Twain’s facetiousness. Franklin, he says, ‘prostituted his talents to the invention of maxims and aphorisms calculated to inflict suffering upon the rising generation of all subsequent ages’. He made life hell for boys. Whenever one tried squeezing some pleasure from life, his father would throw Franklin in his face.

Many have read Twain’s essay as a complaint, but J. A. Leo Lemay reads it as a compliment, a playful homage by a fellow journalist, printer, humourist and maxim-monger. Twain’s biography supports Lemay’s interpretation. His brother Orion Clemens reprinted several Poor Richardisms in his Missouri newspaper and named his Iowa printing house the Ben Franklin Book and Job Office. As his brother’s apprentice, Twain followed Franklin, who apprenticed in his brother James’s Boston printing house. Travelling to Philadelphia in 1853, Twain visited Franklin’s tomb and toured Independence Hall, where he deliberately sat where Franklin had sat. Three years later, Twain delivered a speech commemorating Franklin’s 150th birthday. And two decades after that, Twain reread and annotated Franklin’s autobiography. Franklin’s is the most famous autobiography in American literature. Its episodes have become familiar to readers around the globe, especially the story of Benjamin breaking his indenture, going on the lam to escape his brother’s abuse and reaching Philadelphia, where he found himself munching a puffy roll while carrying others as he toured the city on a long day that ended at the Crooked Billet Tavern. Franklin takes his personal story through his electrical experiments to his 1757 journey to London, where it cuts off, leaving unwritten his legislative, diplomatic and literary life during the Revolutionary era.

The weight that Twain gives to Franklin’s famous sayings compared to the autobiography reflects how influential they had become. But it was not Poor Richard’s per se that immortalized the maxims, but one particular part of one particular almanac. Poor Richard’s Almanack for 1758, Franklin’s last, included ‘Father Abraham’s Speech’, a ‘greatest hits’ compilation from his earlier almanacs. Speaking to some bargain-hunters, Father Abraham repeats numerous Poor Richardisms, telling the crowd, ‘Let us hearken to good advice, and something may be done for us; “God helps them that help themselves,” as Poor Richard says.’

The next year Franklin’s nephew, namesake and quondam printing partner Benjamin Mecom separately issued Father Abraham’s Speech, which would reappear countless times as The Way to Wealth, a title that puffs it as a self-help guide to money-making. The Way to Wealth became a staple of the chapmen’s trade. Travelling salesmen known as chapmen would fill their packs with little books known as chapbooks and sell them across the countryside. As a chapbook, The Way to Wealth permeated America. It widely disseminated Franklin’s famous sayings and crystallized his reputation as the Wizard of Saws. With a three-decade head start on the autobiography, The Way to Wealth also conditioned how people perceived Franklin’s life.

Reprints were not restricted to America. During the eighteenth century The Way to Wealth was translated into French, Gaelic, German, Italian and Russian. One London printer issued The Way to Wealth in 1779 as a broadside, a one-page edition suitable for framing. English publishers from Bath to Canterbury subsequently reissued more broadsides. Perhaps Twain’s account is not so hyperbolic. Hanging a framed copy of The Way to Wealth in the parlour, parents could remind their children daily about Franklin’s wisdom.

The French traveller Michel Chevalier, who visited Cincinnati, Ohio, in 1834, was impressed by how the city had grown. Its founders had ‘brought with them nothing but sharp-sighted, wakeful, untiring industry’, Chevalier observed. ‘They seem to have chosen Franklin for their patron-saint, and to have adopted Poor Richard’s maxims as a fifth gospel.’ The history of publishing confirms Chevalier’s observation. One Cincinnati publisher reprinted The Way to Wealth in 1815. With little more than Franklin’s admonition to hard work, Ohio settlers created Cincinnati. The Way to Wealth settled the West.

Franklin’s pamphlet is closely connected to Chevalier’s Saint-Simonist philosophy. Claude Henri de Rouvroy, Comte de Saint-Simon, believed industrial leaders should control society to encourage hard work and eliminate poverty. Saint-Simon foresaw a world based not on wealth or privilege but on merit. Studying with Jean le Rond d’Alembert, he learned about science. Fighting on the American side during the War of Independence, he learned about hard work. Saint-Simon believed that together, science and industry could accelerate civilization. He deeply respected America’s Founding Fathers. Franklin, for one, united the labourer’s persistence, the philosopher’s sagacity and the scientist’s patience.

In his preface to a French edition of The Way to Wealth, Chevalier calls Franklin ‘a worker who became a great statesman and a great philosopher’. His preface closes with a saying loosely adapted from Franklin’s ‘Advice to a Young Tradesman’, which the pamphlet’s cover repeats: ‘If anyone says you can get rich by some means besides industry and frugality, then do not listen to him; he is a viper.’

Diligent nineteenth-century readers went beyond The Way to Wealth and the autobiography. Honoré de Balzac, who appreciated Franklin as scientist, writer and statesman, quipped, ‘His legacy is the lightning rod, the hoax and the republic.’

Before Balzac, Lord Byron had said something similar. Byron enjoyed Franklin’s hoax ‘Parable against Persecution’, which he called a ‘beautiful moral parable in favour of toleration’.10 He paid homage to Franklin’s
electrical research and revolutionary politics in ‘The Age of Bronze’:
Franklin’s quiet memory climbs to heaven,
Calming the lightning which he thence hath riven,
Or drawing from the no less kindled earth
Freedom and peace to that which boasts his birth.

Byron’s friend Leigh Hunt lacked his enthusiasm. He called Poor Richard’s Almanack ‘a heap of “scoundrel maxims”’, borrowing a phrase from James Thomson’s Castle of Indolence. Describing a miser, Thomson says, ‘A penny saved is a penny got,/ Firm to this scoundrel maxim keepeth he.’ Hunt assumed all Franklin’s aphorisms concerned getting and spending. They might befit a rising commercial nation, Hunt said, but the Old World could do without them.

Since liberal politics shaped Hunt’s journalism, his animosity towards Franklin – ‘the greatest liberalizing force in eighteenth-century America’, Stuart P. Sherman would say – is all the more enigmatic. Hunt acknowledged Franklin’s role in extending the sphere of liberty but disavowed his crass American commercialism. Hunt would recycle his earlier Franklin discussion in his own autobiography, prefacing it with an unfair, but vivid comment:
I cannot get it out of my head that the Americans are Englishmen with the poetry and romance taken out of them; and that there is one great counter built along their coast from north to south, behind which they are all standing like so many linendrapers.
One Irish reviewer corrected him, emphasizing Franklin’s kind-hearted benevolence to show that Hunt ‘wholly mistakes the character of the man’.

During his lifetime, Franklin became known for his anecdotes as well as his aphorisms. Samuel Johnson had James Boswell to record his wit and wisdom; Franklin made everyone a Boswell. Friends recorded his anecdotes for posterity. Surviving through the nineteenth century, they (the anecdotes, not the friends) form a major contribution to the history of American humour. They bolster Franklin’s popular image as an American folk hero, a wise sage who derived moral lessons from everyday life.

According to one traditional story, Benjamin’s father Josiah Franklin used to say a lengthy grace before meals, a habit Benjamin despised. While Josiah salted their winter provisions one day, Benjamin told him he could save time by saying grace over the whole cask. It seems unlikely that Benjamin actually said these words to his churchgoing father, but the anecdote stuck. This episode resurfaced in the early twentieth century with the rise of Taylorism, a social movement not dissimilar to Saint-Simonism. Based on Frederick Winslow Taylor’s thought, Taylorism positions the industrial engineer as a social manager who makes the world more efficient. Repeating the anecdote, one Taylorist magazine called Franklin ‘the first efficiency expert’.

The year 1906 marked the bicentenary of Franklin’s birth. Albert Henry Smyth got a head start, issuing the early volumes of his edition of Franklin’s writings the previous year. Sherman said of Smyth’s edition, ‘The Franklin now discoverable in the ten volumes of his complete works is one of the most widely and thoroughly cultivated men of his age.’ The edition was not exactly complete. Disliking what he called Franklin’s ‘salt imagination’ – a phrase from Measure for Measure – the prudish Smyth omitted his funniest stuff.