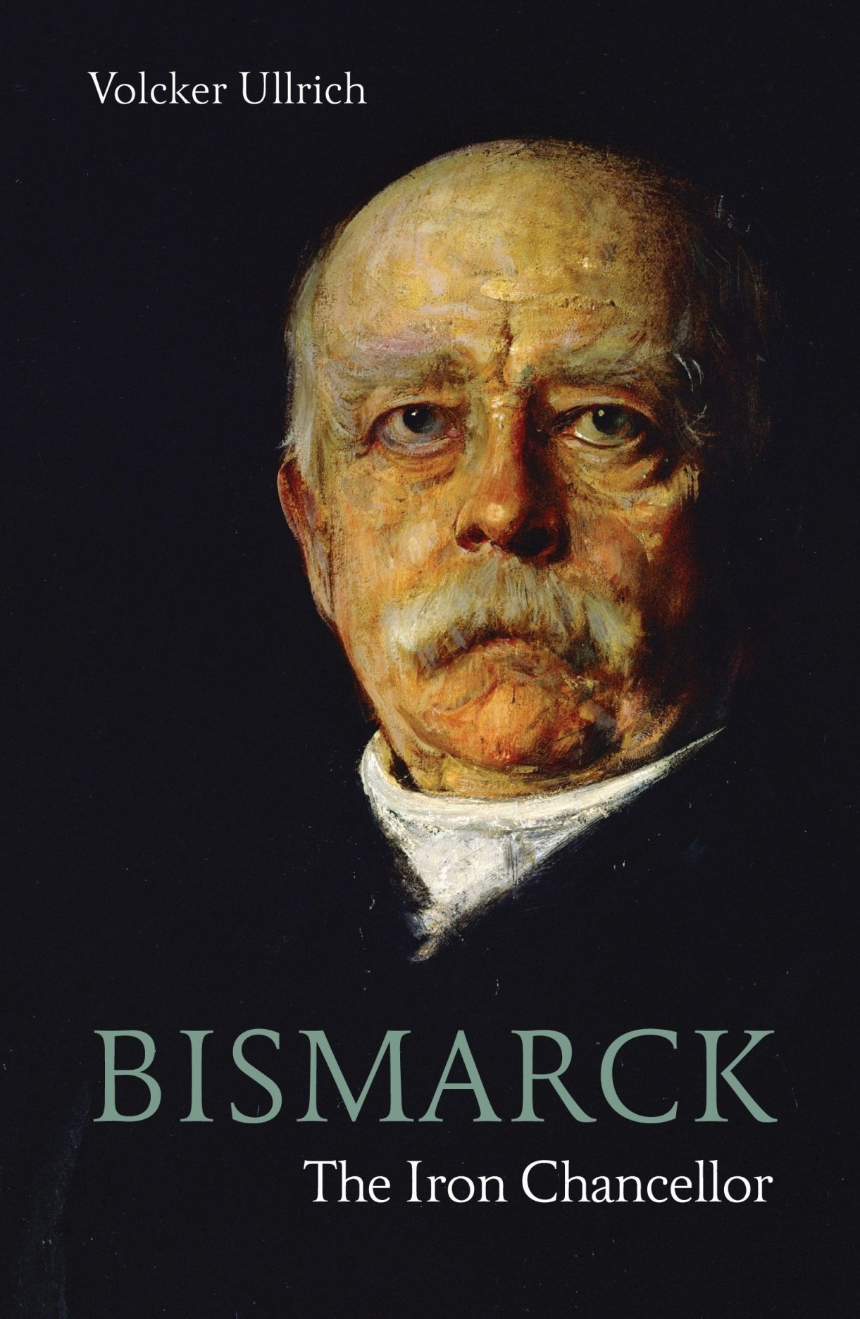 Otto von Bismarck (1815–1898) has gone down in history as the Iron Chancellor, a reactionary and militarist whose 1871 unification of Germany put Europe on a path of disaster leading up to World War I. But, as this new edition of his accessible biography shows, the real Bismarck was a far more complex character.

A leading historian of nineteenth- and twentieth-century history, Volker Ullrich demonstrates that Bismarck—the “Founder of the Reich”—was, in fact, an opponent of liberal German nationalism. After the wars of 1866 and 1870, Bismarck spent the rest of his career working to preserve peace in Europe and to protect the empire he had created. Despite his reputation as an enemy of socialism, he introduced comprehensive health and unemployment insurance for German workers, and he was concerned with maintaining stability and harmony far beyond Germany’s newly unified borders. Comprehensive and balanced, Bismarck shows us the value of looking anew at this monumental figure’s role in European history.

“Ullrich’s eminently readable biography of Otto von Bismarck is just delightful. Packed with quotes and fascinating anecdotes, it paints a vivid and balanced picture of the Iron Chancellor, bringing this complex historical figure to life. Ullrich’s concise analysis loses none of its edge in the refreshing brevity. His book is a brilliant introduction into the life and times of Germany’s first chancellor.”

Katja Hoyer, author of Blood and Iron: The Rise and Fall of the German Empire 1871–1918

“A brilliant, insightful and elegantly written biography of the most influential German of the nineteenth century.”

Those who possess great political power for a long time and then suddenly lose it generally feel the urge to compose their memoirs – not only in order to transmit to posterity as favourable a view as possible of their own achievement, but also so as to settle accounts with former political opponents. It was no different in the case of Otto von Bismarck after his fall. On 16 March 1890, one day after his definitive break with the young Kaiser Wilhelm II, he confided to a visitor: ‘Now I am going to write my memoirs’. Meanwhile, the Reich Chancellery was already piled high with boxes full of secret files that Bismarck, during the next few weeks, would have taken to Friedrichsruh, his place of retirement in the Saxon Forest, outside Hamburg.

As his assistant, Bismarck chose Lothar Bucher, a former 1848 liberal whom he had appointed a councillor in the Foreign Ministry, where he served Bismarck faithfully. Without Bucher’s insistence, Bismarck’s memoirs would probably never have been written. The ex-chancellor was often lacking in enthusiasm. He was capable of spending hours stretched out on the chaise longue immersed in reading the papers while his amanuensis sat at the table, pencil ready, waiting to record his words. When the grumpy old man finally began dictating, his account of events would be selective and disordered, constantly mixing history with reflections on the political events of the day; as a result, Bucher became quite desperate. He complained in January 1892:
It is not just that his memory is defective and his interest in what we have already done is slight. He actually tries to distort things deliberately, even when it comes to well-established facts and events. He will not admit to having been involved in anything that failed, and he will not allow that anyone other than himself made a contribution.

It was Bucher’s task to bring order to this chaotic material, correcting the most egregious errors, and to make a publishable text out of mere fragments. The final product was very far from complete in October 1892, when, in a hotel on Lake Geneva, Bucher died. Up to his own death on 30 July 1898, Bismarck continually made small revisions to the already-completed sections, without taking the work any further. The first two volumes of his Memories and Reflections were published by Cotta at the end of November 1898; the third volume, centring on Wilhelm II and the events surround-ing Bismarck’s dismissal, only appeared in September 1921, after the end of the Wilhelmine Reich. It proved more successful than anyone had expected. ‘In the bookshops,’ noted Hildegard von Spitzemberg, ‘people are coming to blows over Bismarck’s memoirs ... The edition of 100,000 copies is long since out of print, and there is no way that Cotta can meet the continuing demand.’

In his final years, Bismarck had become a living monument to himself, and his memoirs played no small part in exalting his historical importance into the realms of myth. They provided the orthodox view of Bismarck – which dominated German historiography up to 1945 – with an inexhaustible stock of quotations, and they shaped the image many patriotic Germans had of the founder of the first German nation state: ‘Lesser German’ but ‘Greater Prussian’. For a long time, this made it more difficult to form a sober, undistorted view of this figure who had such a large impact on German history. Though the literary quality of many sections of Bismarck’s memoirs still continues to impress, as a historical source they should be used only with the greatest caution.

The idolisation of Bismarck that predominated for so long was matched by a demonising view, the other side of the coin; as the journalist Maximilian Harden remarked critically as early as 1896, this tended to ‘depict him as a pitch-black, diabolically clever Machiavellian caricature, occasionally dressing up on a whim as a sulphur-yellow cuirassier’. After 1945, the inclination to paint Bismarck as the villain responsible for all the distortions of German history in the first half of the twentieth century was for a time very widespread, and even today such a view has some advocates. Modern historians, however, have moved away equally from both the positive and the negative legends. There are now three important Bismarck biographies, each of which in its own way represents a significant historiographical achievement.

The first of these, by the Frankfurt historian Lothar Gall, appeared in 1980. He was the first to succeed, with aplomb, in navigating between the Scylla of Bismarck-worship and the Charybdis of demonising the German statesman, instead considering him critically within the terms of his own times. Gall sees Bismarck as someone with a great deal of influence on events who was nonetheless unable to control the changes he had unleashed, and as an arch-royalist who wanted to preserve Prussia’s conservative political structures but who also did much to further the process of economic and social modernisation. In short, Bismarck was a ‘white revolutionary’ – Gall’s subtitle was borrowed from an essay by Henry Kissinger – who, like the sorcerer’s apprentice, ended up being unable to master the powers he had summoned.

In 1985, the first volume of Ernst Engelberg’s Bismarck biography appeared in a simultaneous edition published by the Akademie Verlag in East Berlin and the Siedler Verlag in West Berlin; at the time, it was rightly celebrated as a German achievement on both sides of the Wall. People were inevitably surprised at the way a leading East German historian, a Marxist, approached this figure, till now decried as the ultimate embodiment of reactionary ‘Prussianism’, with such understanding and at times even sympathy. It was quite possible to read the book as a cautious attempt at a return to a common national sense of shared traditions, reappropriating the ‘historical heritage’. In a sense, this first volume anticipated the events that would have already occurred by the time the second volume appeared in 1990 – the collapse of the GDR and the unification of the two German states that had arisen from the bankrupt remains of the nation Bismarck had created, the German Reich.

The chief difference between these two works and the great Bismarck trilogy by the American historian Otto Pflanze, completed in 1990, is that Pflanze’s biography brings the great statesman’s complex personality far more into the foreground. Pflanze has no hesitation in placing Bismarck on the couch, as it were, to consider him from a psychoanalytic point of view. In this way, he makes interesting findings about the relationship between Bismarck’s nervous constitution and his political behaviour, among other things. But the problem with this psychoanalytic approach is that it often amounts to little more than guesswork, because there are aspects of Bismarck’s inner life that he kept hidden even from those closest to him. ‘Faust complains of the two souls dwelling in his breast; but I play host to a whole bickering crowd of them. It is just like a republic’, he confided to a friend. ‘I pass on most of what they say. But there are entire provinces I will never open to the gaze of another human being.’ Even a psychoanalytically-trained historian will never be able to penetrate Bismarck’s many-sided personality in all its aspects. For this reason, the following comment from 1910 remains true today: ‘Like Frederick the Great and Goethe, Bismarck is a figure we will never get to the bottom of. Really, everyone makes their own biography of such men as these.’