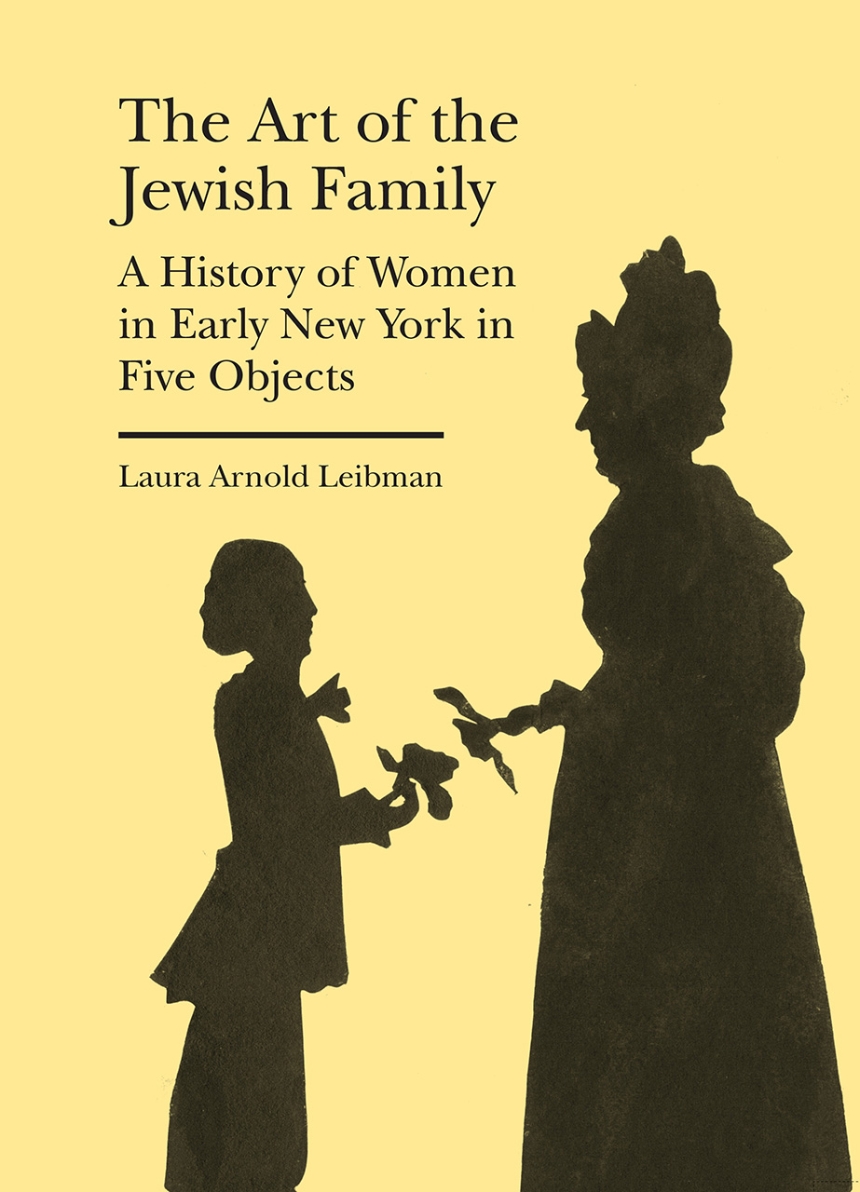 In The Art of the Jewish Family, Laura Arnold Leibman examines five objects owned by a diverse group of Jewish women who all lived in New York in the years between 1750 and 1850: a letter from impoverished Hannah Louzada seeking assistance; a set of silver cups owned by Reyna Levy Moses; an ivory miniature owned by Sarah Brandon Moses, who was born enslaved and became one of the wealthiest Jewish women in New York; a book created by Sarah Ann Hays Mordecai; and a family silhouette owned by Rebbetzin Jane Symons Isaacs. These objects offer intimate and tangible views into the lives of Jewish American women from a range of statuses, beliefs, and lifestyles—both rich and poor, Sephardi and Ashkenazi, slaves and slaveowners.

Each chapter creates a biography of a single woman through an object, offering a new methodology that looks past texts alone to material culture in order to further understand early Jewish American women’s lives and restore their agency as creators of Jewish identity. While much of the available history was written by men, the objects that Leibman studies were made for and by Jewish women. Speaking to American Jewish life, women’s studies, and American history, The Art of the Jewish Family sheds new light on the lives and values of these women, while also revealing the social and religious structures that led to Jewish women being erased from historical archives.

The Art of the Jewish Family was the winner of three 2020 National Jewish Book Awards: the Celebrate 350 Award for American Jewish Studies, the Gerrard and Ella Berman Memorial Award for History, and the Barbara Dobkin Award for Women's Studies.

“From the moment this book opens as Judith de Mere­da steps off a ​‘creaky deck’ and into ​‘mud­dy streets,’ we know that we are in the hands of a ter­rif­ic writer. In this bril­liant­ly researched and rich­ly illus­trat­ed book, we jour­ney to New York City in the cen­tu­ry between 1750 and 1850. . . . She dis­cov­ers America’s Jew­ish women shap­ing ​‘the emo­tion­al land­scape of Amer­i­can Judaism.’ More­over, her path­break­ing vol­ume com­mands that atten­tion be paid to mate­r­i­al cul­ture in future writ­ing about Amer­i­can Jew­ish history.”

“It’s a mea­sure of the author’s gifts, both as a schol­ar and as a sto­ry­teller, that we come to know these women, their fam­i­lies, and the Jew­ish com­mu­ni­ties in which they lived with aston­ish­ing clar­i­ty and inti­ma­cy. Leib­man rich­ly deserves the wide­spread acclaim — and, even more so, the affec­tion — that her remark­able book has attracted.”

"Complementing and enlivening the narrative, not just accompanying it, the volume’s 96 images encompass painting, portraiture, and maps—a bonanza of visual information. Just when we’ve come to believe we know all there is to know about the early experiences of colonial and federal-era American Jews, Leibman reminds us how much more could be known if only we would deploy a different set of sources and ask a different set of questions. Through five sharply focused case studies, she takes her readers beyond the usual places—New York and Charleston, say—and sets them down in Barbados and Suriname of the 18th and early 19th centuries, whose robust Jewish life rendered that of the American colonies a poor cousin. . . . A harvest of ideas, The Art of the Jewish Family yields a rich ensemble profile of Jewish women of the 18th and 19th centuries, an invigorating consideration of history as a process, and a compelling argument for integrating material culture as a matter of course into any and all historical projects."

"From an ivory miniature to a set of silver cups, the objects discussed in this book all attest to how women in New York from 1750-1850 harnessed material culture to explore and express their Jewish identity."

Apollo "Off the Shelf"

"Liebman does a wonderful job not only showing the changes in women’s status over time, but the roles race and class play in a person’s life. While those interested in women’s studies are the most obvious audience for this work, anyone who wants to better understand early American history--Jewish or otherwise–will find Liebman’s book has a great deal to offer."

"This is a deeply-researched book and surprisingly fun read."

“This is a pathbreaking volume by a master scholar.”

“The Art of the Jewish Family is an elegantly written, astonishingly researched, and persuasively argued collective biography of five early American, New York Jewish women. . . . From the moment that the book opens, we know that we are in the hands of a terrific writer. . . . Leibman’s detailed analyses of the messages encoded in the objects is brilliant. . . . Given the power of the material and the grace of the writing, I would hope that this book would reach beyond scholars to the significantly wider audience of those outside the academy who are deeply interested in early American history. . . . I am in awe of Leibman’s accomplishment."