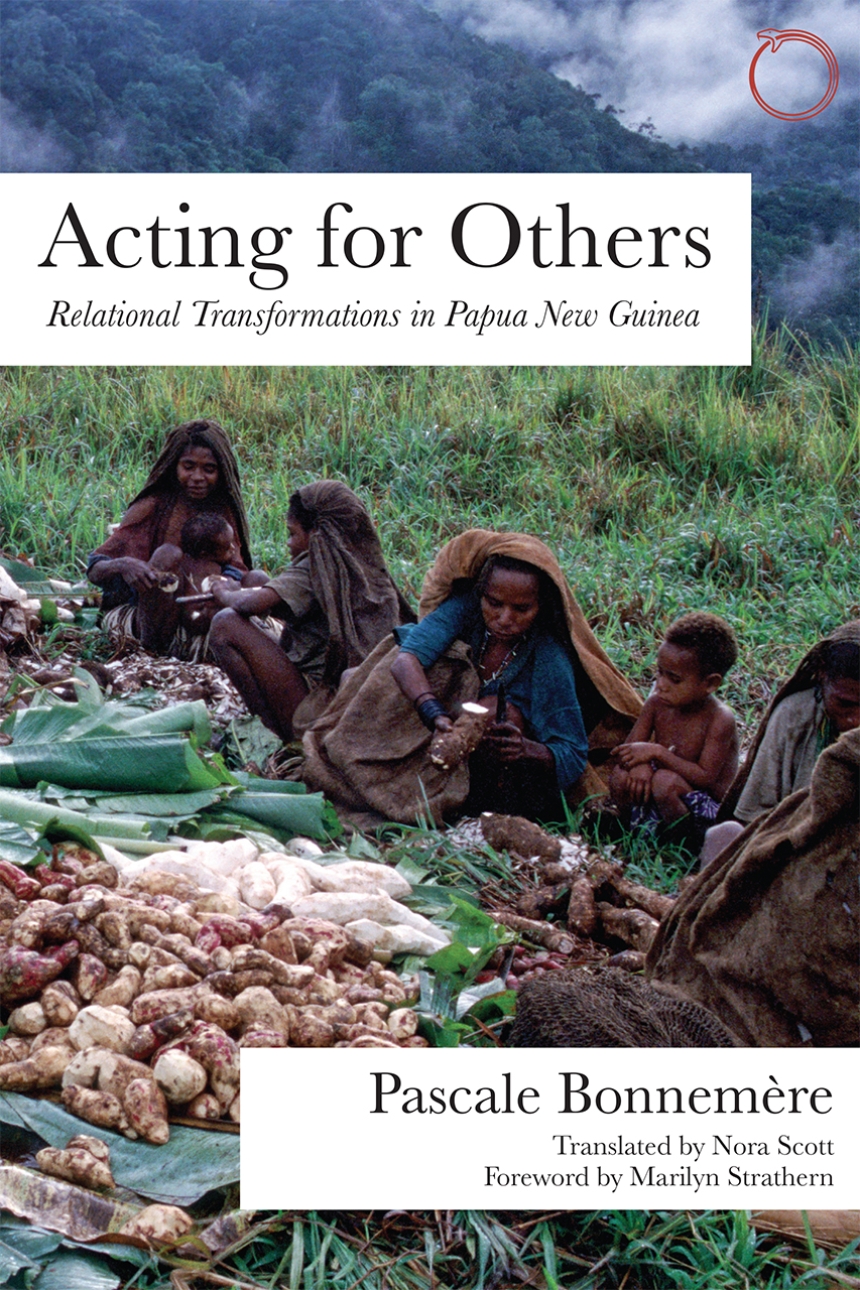 Translated by Nora Scott
With a Foreword by Marilyn Strathern
For the Ankave of Papua New Guinea, men, unlike women, do not reach adulthood and become fathers simply by growing up and reproducing. What fathers—and by extension, men—actually are is a result of a series of relational transformations, operated in and by rituals in which men and women both perform complementary actions in separate spaces. Acting for Others is a tour de force in Melanesian ethnography, gender studies, and theories of ritual. Based on years of fieldwork conducted by the author and her husband and co-ethnographer, this book’s “double view” of the Ankave ritual cycle—from women in the village and from the men in the forest—is novel, provocative, and one of the most incisive analyses of the emergence of ideas of gender in Papua New Guinea since Marilyn Strathern’s The Gender of the Gift.
At the heart of Pascale Bonnemère’s argument is the idea that it is possible for genders to act for and upon one another, and to do so almost paradoxically, by limiting action through the obeying of taboos and other restrictions. With this first English translation by acclaimed French translator Nora Scott, accompanied by a foreword from Marilyn Strathern, Acting for Others brings the Ankave ritual world to new theoretical life, challenging how we think about mutual action, mutual being, and mutual life.

"Women are everywhere, women are nowhere. Humans have to be made, bodies have to be remade. Rituals are the key to those acts of person-making. How I wish, reading this marvelous piece of ethnography, that we had anything of the same quality for the production of boys and girls in contemporary Europe."

"Gender relations, initiation rituals, and their comparative implications have intrigued anthropologists of Melanesia for many decades. Through a rigorous and finely-crafted case study of the Ankave, Bonnemère’s newly translated book expands our awareness of these issues and reaches path-breaking insights that have powerful ramifications for our relational understanding of gender and of social life generally."

Bruce Knauft, author of The Gebusi: Lives transformed in a rainforest world

"Acting for others is a book to stir the anthropological imagination. It breathes new life into debates over relationality and agency, both through a vivacious and lucid style and through the considerable assistance of the Ankave-Anga of Papua New Guinea. These people furnish Bonnemère with a beautifully orchestrated demonstration of just what is lost in overlooking women’s participation in social processes. And for those for whom ‘gender’ seems a restrictive rather than expansive category, we may expand that to what we take from the ethnographic record as significant about kinship, regeneration, and the states of being that people see all around themselves. Bonnemère’s new book is a leap forward from earlier anthropological concerns not just with what it is that rituals make when they seem to be making gender, but also with how they do so."

Marilyn Strathern, author of Before and after gender

"Bonnemère's study is not only an ethnographically rich and theoretically astute examination of initiation in Melanesia. Her analysis also has relevance beyond this region, highlighting the importance of investigating the intrinsic relations between male and female in any form of social process."