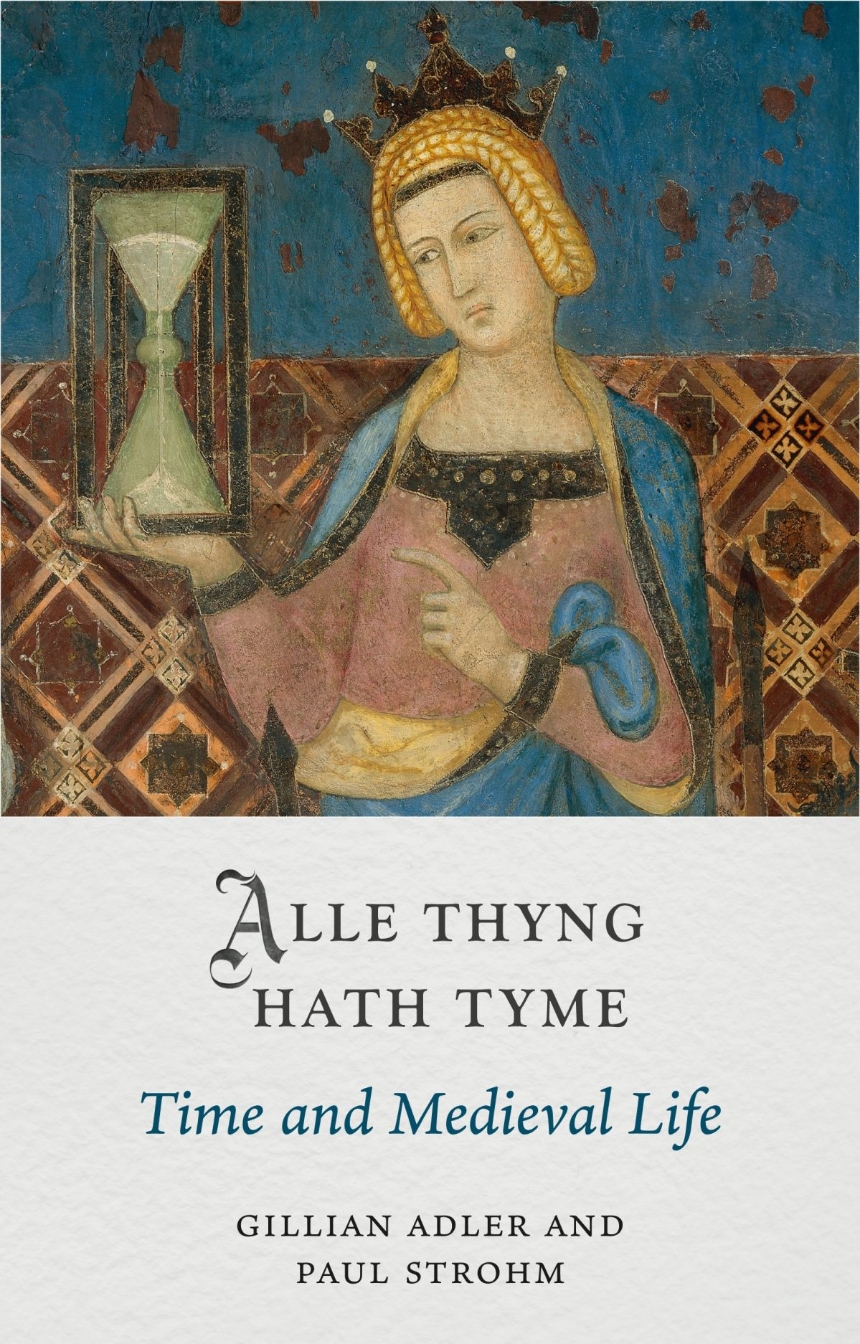 An insightful account of how medieval people experienced time.

Alle Thyng Hath Tyme recreates medieval people’s experience of time as continuous, discontinuous, linear, and cyclical—from creation through judgment and into eternity. Medieval people measured time by natural phenomena such as sunrise and sunset, the motion of the stars, or the progress of the seasons, even as the late-medieval invention of the mechanical clock made time-reckoning more precise. Negotiating these mixed and competing systems, Gillian Adler and Paul Strohm show how medieval people gained a nuanced and expansive sense of time that rewards attention today.

Medieval people lived among colliding temporal systems. Rural workers (that is, the great majority of the populace) inhabited a natural timescape in which sunrise and sunset, the varying seasons, the tides and the motions of moon and stars governed choices and actions. Monks and clerics and lay devotees lived according to a finely developed and highly prescriptive liturgical calendar that shaped their daily prayers and the progress of their devotional year. Meanwhile, the advent and public display of mechanical clocks were opening additional possibilities of measured time, dictating new uniformity to the conduct of commercial affairs and to devotional observances. As a result, people lived their lives in more than one system, proving highly adept at juggling multiple and contending experiences of time.

Medieval lives were, moreover, lived within a temporal horizon at least as expansive as our own. Conceptions of time embraced its smallest unit, the atom or ‘athomus’, defned by the author of the speculative Cloud of Unknowing as ‘the schortest werk of all that man may imagin . . . the leest partie of time . . . so litil that, for the littilnes of it, it is undepartable [indivisible] and neighhond [nearly] incomprehensible’. At the other extreme lay God’s eternity, a macro-time, or no longer time at all – an inalterable continuum. This is described in Chaucer’s translation of Boethius, the sixth-century author of the Latin Consolation of Philosophy, as ‘the endles spaces of eternite’. Augustine contrasts the immeasurable immobility of this expanse of time with the saeculum or restless world of human endeavour, calling it ‘ever still-standing eternity’.
Between these extremes – time so irreducible as to be invisible and time so infnitely protracted as to become inalterable – lies that saeculum, or timebound world, in which medieval lives were actually lived. This is what medieval people thought of as the ‘transitory’ world, a world of temporal instability but nevertheless one in which passing time could be comprehended, measured, evaluated and employed.

Just as medieval people were flexible in their views of time and duration, so were they receptive to its varied patternings, the different shapes time might assume. People measured time with a range of devices, including astrolabes with which to make celestial observations, sundials, dripping water and burning candles, as well as that transformative medieval innovation, the mechanical clock. As we review medieval timekeeping protocols and practices, one constant element will be the ingenuity with which different systems of timekeeping and different philosophies of time were deployed. Medieval people at all levels of sophistication were, if anything, more keenly aware of simultaneous and contending temporalities than we are, and more skilled at entertaining a wider range of temporal possibilities. An ability to reconcile a multiplicity of systems should not be considered a symptom of confusion or scientific ineptitude. Rather, in their employment of multiple timekeeping systems, medieval people felt no pressure to choose among them, and instead demonstrated both virtuosity and sophistication in their application and use.
(…)
Here we offer an introductory look at different medieval approaches to the measurement of time. We begin with ordinary and intuitive systems based on natural and seasonal change: movements of stars and planets, the division of days and nights, the hours of the day, the change of seasons and other phenomena that register time’s passage. Closely related to such cyclical systems is the Church’s own liturgy, with its annual round of devotions and its division of the day into hours of prayer. Then to be considered are various ingenious attempts at a more systematic measurement of time, climaxing in the emergence of the mechanical clock and its rapid and transformative late medieval introduction.