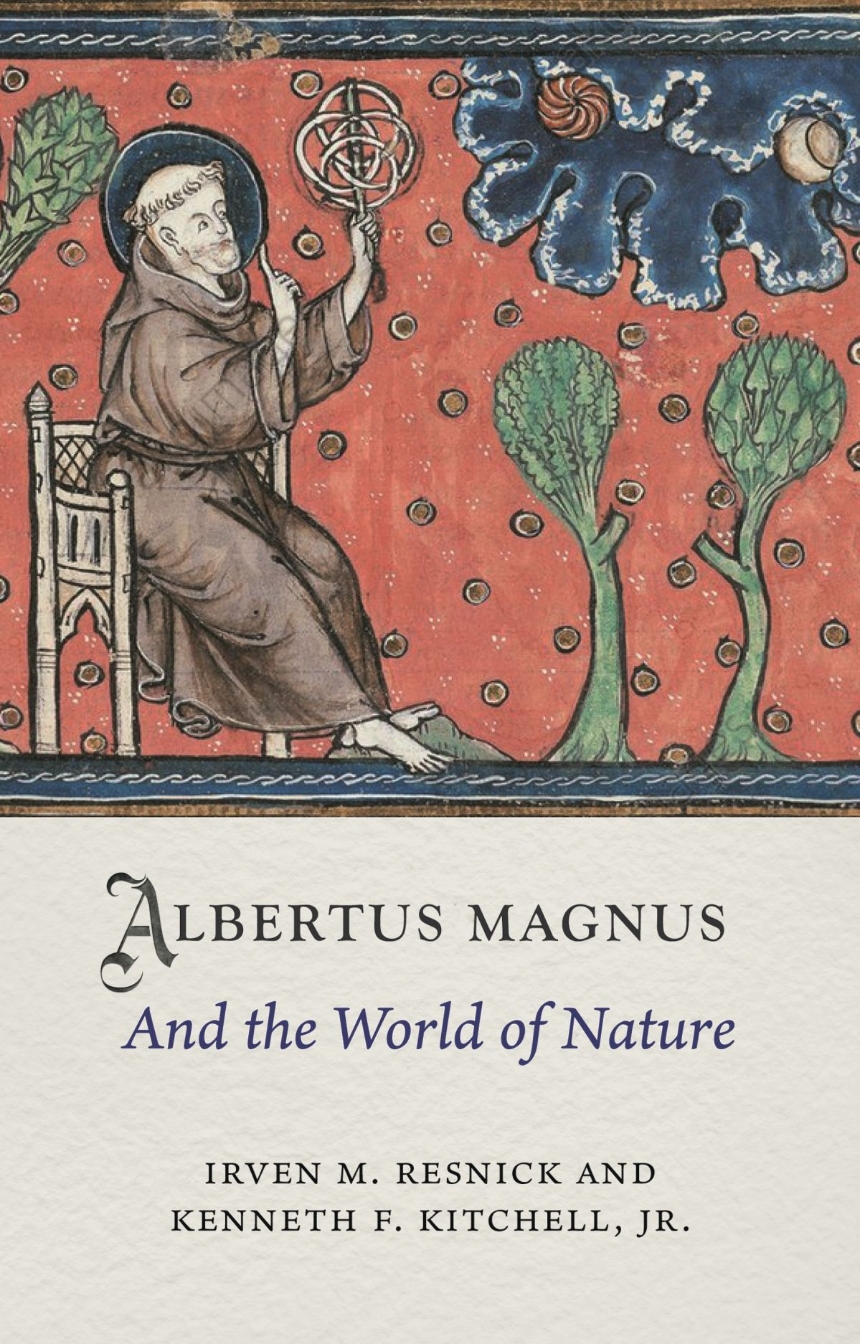 Albertus Magnus and the World of Nature

Albertus Magnus and the World of Nature

The first comprehensive English-language biography of Albert the Great in a century.

As well as being an important medieval theologian, Albertus Magnus (Albert the Great) also made significant contributions to the study of astronomy, geography, and natural philosophy, and his studies of the natural world led Pope Pius XII to declare Albert the patron saint of the natural sciences. Dante Alighieri acknowledged a substantial debt to Albert’s work, and in the Divine Comedy placed him equal with his celebrated student and brother Dominican, Thomas Aquinas.

In this book, the first full, scholarly biography in English for nearly a century, Irven M. Resnick and Kenneth F. Kitchell Jr. narrate Albert’s key contributions to natural philosophy and the history of science, while also revealing the insights into medieval life and customs that his writings provide.

ONE: The Life and Works of Albertus Magnus

In his masterful DivineComedy, the Italian poet Dante Alighieri (d. 1321) places Pope Nicholas III (d. 1280) upside down in the eighth circle of hell with the soles of his feet ablaze. He imposed that cruel punishment upon the pope who had once been the protector of the Franciscan Order by placing him among the simoniacs, that is, those accused of buying and selling church offices for profit. On 15 November 1280, and only a few months after Nicholas’s death, Albertus Magnus, one of the shining lights of the Dominican Order, also died. Dante, who was himself educated by Dominicans at Santa Maria Novella in Florence, placed Albertus far from Nicholas, in Paradise among the wise spirits of Heaven and the Sun and beside Thomas Aquinas, his celebrated student and brother Dominican. In his prose Banquet (Convivio book three, Chapter Five), Dante refers to him as Albert the Great (Alberto della magna), and the poet acknowledges his own substantial debt to Albertus’ teaching on astronomy, geography and natural philosophy, and in particular to Albertus’ treatises On the Nature of Places (De natura locorum) and On the Causes of the Properties of the Elements (Liber de causis proprietatum elementorum). The fate of the two Dominicans, Albertus and Thomas, differed dramatically from that of Pope Nicholas III

Dante’s judgement is shared by Albertus’ near contemporaries, who placed him on a level equal to that of the ancient philosophers. Even his rather jealous rival, the Franciscan friar Roger Bacon (d. 1292), referred to Albertus as ‘the most noted of Christian scholars’, and praised him as one of the ‘wise men’ (sapientes). Siger of Brabant, a younger contemporary, referred to him as one of the most eminent men in philosophy, while Albertus’ student Ulrich of Strasbourg (d. 1277) described him as ‘so godlike in every branch of knowledge that he can properly be called the wonder and marvel of our age’. According to Henry of Herford’s fourteenth-century Chronicle, just as God established the sun and the moon as two great lights to illumine the world, so Thomas Aquinas and Albertus were the two great lights of the Dominican Order. Since during Henry’s lifetime (c. 1300–1370) Thomas had been canonized as a saint and Albertus had not, Henry compared Thomas, the renowned theologian, to the greater light of the sun, and Albertus, the distinguished natural philosopher, to the lesser light of the moon; but because natural philosophy logically precedes theology among the sciences, Henry also praised Albertus as ‘the brightest sun from among all of the philosophers of the whole of Christendom’. Similarly, towards the end of the fifteenth century, the Cologne Dominican Rudolph of Nijmegen remarked that Albertus illuminated the entire world by his understanding of all things capable of being known, while the epitaph at Albertus’ tomb in the Dominican church of Cologne describes him as ‘a prince among philosophers, greater than Plato, and hardly inferior to King Solomon in wisdom’.

When Albertus died on 15 November 1280, he was likely an octogenarian, although the year of his birth is uncertain. Based on later medieval testimony, most modern biographers reckon that Albertus was born about 1200. But Albertus’ younger Dominican contemporaries Bernard Gui (d. 1331) and Tolomeo of Lucca (1236–1327), who composed brief biographies or vitae for both Albertus and Thomas Aquinas, remark that at his death Albertus was ‘more than eighty’, while in the fifteenth century, the Dominicans Luis of Valladolid and Rudolph of Nijmegen both insisted that Albertus was 87 when he died, indicating that he may have been born before 1200. Just as no firm date can be established for the year of Albertus’ birth, there is no clear consensus for many of the details of his early life.

A variety of sources supply material for Albertus’ biography. In addition to Albertus’ few statements of a personal nature scattered throughout his writings, there are archival materials (episcopal acts, correspondence relating to his activities on behalf of the Dominican Order, municipal documents, and so on). Although a brief early biographical account is found circa 1260 in the Lives of the Brothers of the Order of Preachers (Vitae fratrum ordinis praedicatorum), compiled by Gérard de Frachet, the primary medieval sources for Albertus’ life first appear in the late fourteenth and fifteenth centuries as part of an effort to promote Albertus’ canonization. These include Henry of Herford’s Chronicle (Chronicon, c. 1355) or Book of Memorable Events (Liber de rebus memorabilioribus), Luis of Valladolid’s Account of Albertus Magnus (Tabula Alberti Magni, 1414), the anonymous mid-fifteenth-century Cologne Legends (Legenda Coloniensis), Peter of Prussia’s Life of Blessed Albert, the Great Doctor (Vita B. Alberti DoctorisMagni, c. 1485), and Rudolph of Nijmegen’s Legends of AlbertusMagnus (Legenda Alberti Magni, c. 1488). Although some of the later sources are aware of contradictions in Albertus’ early biographical history and attempt to reconcile them, the result is less than satisfactory. Simon Tugwell admirably summarizes these contradictions for the modern reader in his ‘Life and Works of Albert the Great’, but contradictions they remain. Indeed, exhibiting a notable gift for understatement, James Weisheipl remarks that ‘the first 40 years of Albert’s life are relatively obscure.’ Nevertheless, we shall attempt to present a brief yet plausible summary of Albertus’ life and early career.

As Albertus’ birth year is uncertain, so too are his place of birth and his family name. Albertus contributes to the historian’s frustration by referring to himself at one time as Friar Albertus of Lauingen and at another as Albertus of Cologne. A seal Albertus received upon becoming a theology master in Paris in 1245 identified him as Albertus Lauigensis, however, so it seems likely that either his family name was Lauingen or that he was born in Lauingen, a small town in Swabia situated on the Danube, approximately 500 kilometres (300 mi.) southeast of Cologne and 130 kilometres (80 mi.) northwest of Munich in the diocese of Augsburg.

Although some modern historians maintain that Lauingen is Albertus’ family name, most medieval chroniclers suppose that Lauingen is Albertus’ birthplace. Lauingen itself promoted the medieval tradition by constructing a chapel in Albertus’ name during the fourteenth century. A monument to Albertus Magnus that stands before Lauingen town hall was erected in the late nineteenth century, and a designated ‘Albertus Path’ conducts tourists through the old town.

Albertus’ parents’ names and the number of his siblings are unknown, but we know the name of a brother, Henry. Most  historians have rejected Rudolph of Nijmegen’s assertion that Albertus belonged to the noble family of the counts of Bollestat (or Bollstadt), whose now-ruined castle lies only about 30 kilometres (19 mi.) from Lauingen. It seems more likely that Albertus was descended from a family of lesser knights, or ministeriales, that had served the Holy Roman Emperor Frederick I (d. 1190), that is, Frederick Barbarossa (Red Beard), who was also duke of Swabia. Indeed, Emperor Frederick I Barbarossa had constructed Lauingen’s defensive walls, and its medieval burghers placed the emperor’s image on the town seal to identify Lauingen as an imperial town. Lauingen continues to enjoy widest acceptance as Albertus’ birthplace.

Even though Albertus’ was not a high noble family, they must have been prosperous since, in a rare observation about his youth, Albertus describes hunting with falcons and dogs, practices associated with the upper classes:
Now I myself have had experience . . . [with] falcons when I was a lad. Whenever I led my dogs with me into the field (they are called ‘bird dogs’ [canes avium] because they know how to find birds), falcons would follow me to the field, flying above me in the air, and they would strike the birds which the dogs had put to flight. These birds came back to earth trembling and allowed themselves to be picked up in our hands. At the end of the hunt we gave one to each falcon and then they left us. (da, 8.110; sz, vol. i, p. 716)
Albertus reveals too that:
I once had a horse that suffered from rheum, and mucus [coryza] flowed to the nostrils drop by drop. I fumigated the horse often after having spread dried cow dung over coals and after having covered its head, so that, though he had seemed on the verge of death, he escaped. (QDA, p. 58)
Since Dominicans were forbidden to ride on horseback like great lords, his description of this cure for equine rheum likely recalls an event from his youth as well.