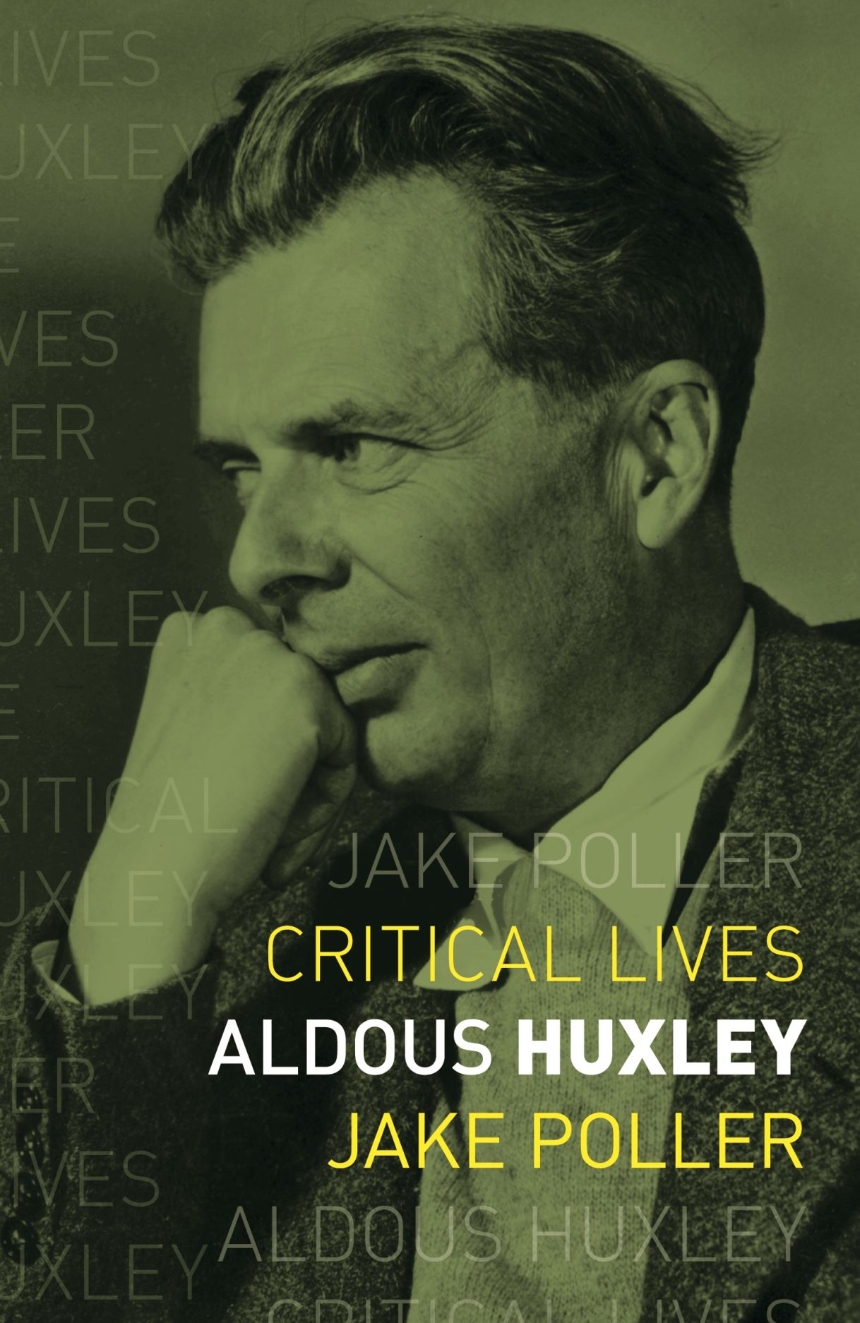 “A welcome and necessary update of the life of one of the twentieth century's most provocative intellectuals.”—Dana Sawyer

A rich and lucid account of Aldous Huxley’s life and work.

Aldous Huxley was one of the twentieth century’s most prescient thinkers. This new biography is a rich and lucid account that charts the different phases of Huxley’s career: from the early satirist who depicted the glamorous despair of the postwar generation, to the committed pacifist of the 1930s, the spiritual seeker of the 1940s, the psychedelic sage of the 1950s—who affirmed the spiritual potential of mescaline and LSD—to the New Age prophet of Island. While Huxley is still best known as the author of Brave New World, Jake Poller argues that it is The Perennial Philosophy, The Doors of Perception, and Island—Huxley’s blueprint for a utopian society—that have had the most cultural impact.

“Poller, in his new biography of Aldous Huxley, does the impossible. He covers the ground revealed previously by other scholars, but also manages to add fresh details, knowledgeable insights, and astute critiques—and in far fewer pages than in any earlier treatments. This book is not only a marvel of concise and readable scholarship but a welcome and necessary update of the life of one of the twentieth century’s most provocative intellectuals.”

“Poller’s Aldous Huxley is not just an engagingly written introduction to the life and work; this well-researched and wide-ranging critical biography provides many fresh insights into the less familiar aspects of Huxley’s oeuvre, such as Eastern religions, parapsychology, and ecology. An outstanding book.”

Aldous Leonard Huxley was born on 26 July 1894 in Godalming, Surrey, in the twilight of the Victorian era. His father, Leonard Huxley, was an old-fashioned man of letters. In 1901 he joined the publishing firm of Smith, Elder & Co., where he helped to edit the Cornhill Magazine, which was named after the publisher’s address at 65 Cornhill, London. Leonard wrote biographies of his father, T. H. Huxley, and the botanist and explorer Joseph Dalton Hooker; edited editions of the letters of Jane Welsh Carlyle and Elizabeth Barrett Browning; and became editor of the Cornhill in 1916. In 1885 he married Julia Frances Arnold, the sister of the novelist Mrs Humphry Ward. Julia had obtained a first in English Literature from Somerville College, Oxford, and went on to found Prior’s Field School. By the time of Aldous’s birth she already had two sons, Julian and Trevenen, while her youngest child was a daughter, Margaret.

Huxley attended Prior’s Field and was deeply devoted to his mother. At his prep school, Hillside, he was a popular pupil and forged lasting friendships with his cousin Gervas Huxley and Lewis Gielgud (whose brother John would become a famous actor). At the end of November 1908, while Huxley was in his first term at Eton, his mother died of cancer. Julia was just 46 and had only been seriously ill for a couple of months. This was the first of three tragedies that blighted Huxley’s childhood and youth. At Eton, Huxley had begun to demonstrate his intellectual aptitude: he excelled at English and science, and by the age of sixteen he had decided to become a doctor, honouring the scientific legacy of his grandfather T. H. Huxley and his brother Julian, who was studying Natural Science at the University of Oxford.

In the winter of 1910–11, Huxley contracted keratitis punctata, an inflammation of the cornea, which left him almost totally blind for a period of about eighteen months. This had the effect, Huxley would later write, of greatly reinforcing his ‘natural tendency towards solitude and away from practical matters’ (LAH, 473). It is no coincidence that it was during this period that he wrote his first novel, now lost, about ‘a young man and his relationship to two different kind[s] of women’, which Huxley recalled in 1961 as being ‘bitter’ in tone. He may have turned to fiction through boredom (he had to use a guide to walk and was largely confined to his room), or from a desire to escape the harrowing prospect of never regaining his sight, but he may also have recognized that his permanently impaired vision meant his proposed career in medicine was untenable. Unable to return to Eton, he was cared for by various relatives: his father in London (Leonard had moved to a house in Westbourne Square in 1909); his aunt, Mary Ward, at her home in Hertfordshire; and Ethel Collier in Swiss Cottage, the daughter of T. H. Huxley and wife of the portrait painter John Collier. Huxley stoically taught himself to read Braille and, with the help of private tutors, he was able to resume his education.

By March 1912 he could walk unaided and even contrived to ride a bike, despite the fact that, according to Gervas, ‘he really couldn’t see.’ With one eye, he was now able to read with the help of a magnifying glass, while the other was only capable of light perception. Somewhat surprisingly, for such an autobiographical writer, Huxley never fictionalized the experience and only briefly broached the subject in his book about the Bates method, The Art of Seeing (1942): ‘My inability to see was mainly due to the presence of opacities in the cornea; but this condition was complicated by hyperopia and astigmatism.’ After a couple of years, he was able to read with glasses, but was frequently ‘overcome by that sense of complete physical and mental exhaustion which only eye-strain can produce’. Around this time, Leonard (then 52) married Rosalind Bruce, who was thirty years his junior and even younger than Julian and Trevenen. It seems that Leonard was tactless in breaking the news and his comparatively hasty remarriage (three years after Julia’s death) was greeted with consternation by his children.

Huxley travelled by himself to Marburg, Germany, in May 1912. Here he was the guest of Emanuel Kayser, a professor of geology. From his letters, it seems he spent much of his time taking German and piano lessons (he had taught himself to play by touch during the months of his blindness). His eyesight had recovered sufficiently for him to make several lively sketches of the local landscape and various German types, such as beer-drinking porters, students, marching musicians and policemen in Prussian uniforms. He also composed and illustrated several exuberant limericks, such as this:

The notorious Vasco da Gama
Possessed a one-legged pyjama,
Which was recently found
In a hole in the ground,
In the centre of North Alabama.

The following year, Huxley spent some time in Oxford with his brother Trevenen. He was very attached to Trevenen, who was studying hard for his finals in Greats (that is, Classics) and held himself to a very high standard, both ethically and intellectually. Trevenen helped his brother prepare for the formidable Oxford entrance exam. In spite of his poor eyesight, Huxley had been reading widely and had developed an interest in the French symbolist poets. In order to work on his French, he spent July and August of 1913 in La Tronche, next to Grenoble.

Huxley went up to Oxford in October, having been offered a place at Balliol College, the alma mater of his brothers, his father and Matthew Arnold. He was studying for the newfangled degree in English Language and Literature, which, at the time, was regarded by the university as a rather frivolous subject, thus they felt it necessary to include a lot of Anglo-Saxon philology to lend the course academic heft. Huxley’s letters from Balliol are punctuated with imprecations about having to read tedious Anglo-Saxon epics and sermons. At 6 feet 41 ⁄2 inches, Huxley cut an impressive figure at Oxford. He had a thick brown mane of hair like his grandfather. He wore a homburg hat and dressed in three-piece suits. His right eye appeared cloudy and asquint, and was routinely concealed or touched up in his publicity photos. He was incredibly thin and, in combination with his height, this gave him a slightly gangling appearance – in subsequent caricatures, he would be depicted as a stick insect. By all accounts, Huxley had a wonderful first year at Oxford. Gervas Huxley and Lewis Gielgud went up at the same time, and he was friends with the biologist J.B.S. Haldane and his younger sister Naomi, who lived with her parents in Oxford. He was also popular with the Balliol freshmen: he had a piano in his room on which he played ragtime and impressed his friends with erudite quotations – one of the benefits of his temporary blindness and reading with Braille was that it made him remember what he read.

But all was not well with his brother Trevenen, who had only achieved a second in Greats. Up until then, Trevenen had had much more academic success than Aldous. He had won prizes at Eton for Latin and mathematics as well as the Bryant Scholarship, and at Oxford had received a first for his Maths Mods (gruelling exams at the end of the first year). In the wake of his second-class degree, Trevenen had failed the civil service examination. According to Francis Huxley (Julian’s son), Leonard and Julia had instilled in their children the ‘necessity of being large brains’ after the fashion of their grandfather, and Julian’s stellar career at Oxford had only raised the bar. At a low ebb, with no job and feeling like a failure, Trevenen had begun an affair with one of the family’s servants. According to Julian, Trevenen had attempted to educate the girl by taking her to the theatre, concerts and public lectures. Huxley’s first biographer, Sybille Bedford, notes that Trevenen ‘had an ascetic streak, detesting jokes and boys’ talk about sex, and [had] an inclination to subdue his instincts by his principles’. He was therefore distressed that his love for the housemaid had a sexual component that he was not strong enough to resist. One of the family’s faithful retainers knew about the affair and forced them to part, foreseeing that the girl would never be accepted in the Huxleys’ social milieu. For Trevenen, the conflict engendered by this relationship and its painful break-up, added to the ignominy of his academic failure, culminated in a clinical depression and he was sent to a nursing home in Surrey to recuperate. While there, he received a letter from the girl informing him that she was pregnant. This constituted the final blow for Trevenen, who hanged himself from a tree in the nearby woods.