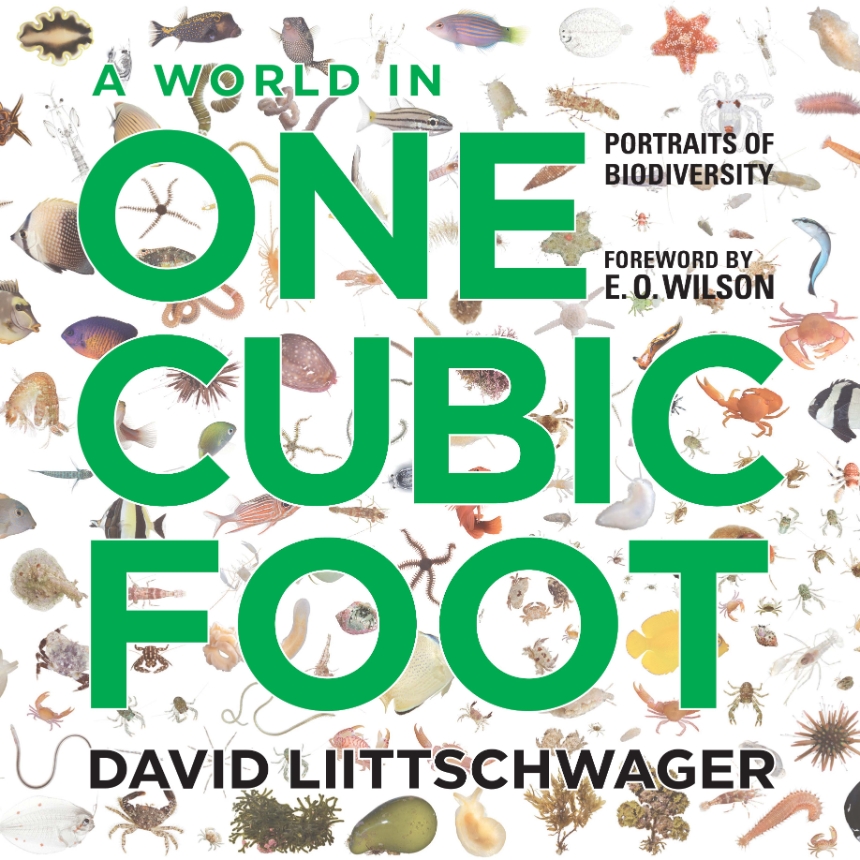 A World in One Cubic Foot

A World in One Cubic Foot

With a Foreword by E. O. Wilson
With texts by W. S. DiPiero, Alan Huffman, August Kleinzahler, Elizabeth Kolbert, Nalini M. Nadkarni, and Jasper and Peter Slingsby
Twelve inches by twelve inches by twelve inches, the cubic foot is a relatively tiny unit of measure compared to the whole world. With every step, we disturb and move through cubic foot after cubic foot. But behold the cubic foot in nature—from coral reefs to cloud forests to tidal pools—even in that finite space you can see the multitude of creatures that make up a vibrant ecosystem.

For A World in One Cubic Foot, esteemed nature photographer David Liittschwager took a bright green metal cube—measuring precisely one cubic foot—and set it in various ecosystems around the world, from Costa Rica to Central Park. Working with local scientists, he measured what moved through that small space in a period of twenty-four hours. He then photographed the cube’s setting and the plant, animal, and insect life inside it—anything visible to the naked eye. The result is a stunning portrait of the amazing diversity that can be found in ecosystems around the globe. Many organisms captured in Liittschwager’s photographs have rarely, if ever, been presented in their full splendor to the general reader, and the singular beauty of these images evocatively conveys the richness of life around us and the essential need for its conservation. The breathtaking images are accompanied by equally engaging essays that speak to both the landscapes and the worlds contained within them, from distinguished contributors such as Elizabeth Kolbert and Alan Huffman, in addition to an introduction by E. O. Wilson. After encountering this book, you will never look at the tiniest sliver of your own backyard or neighborhood park the same way; instead, you will be stunned by the unexpected variety of species found in an area so small.
A World in One Cubic Foot puts the world accessibly in our hands and allows us to behold the magic of an ecosystem in miniature. Liittschwager’s awe-inspiring photographs take us to places both familiar and exotic and instill new awareness of the life that abounds all around.

“Thanks to photographer David Liittschwager, we now have a visual inkling of what exactly lives high in the cloud forest canopy, below our feet in the parks, in the sediments of rivers and on coral reefs. . . . What was found even in fairly nondescript places was wondrous.”

“These images are frank, revealing and unassumingly poetic. . . . Lots of people photograph plants and animals. But no one does it more painstakingly, or with greater compassion, than Liittschwager. His gift is instantly apparent. Though dozens of the creatures documented in A World in One Cubic Foot are totally foreign to our experience, Liittschwager creates an intimacy that you feel in your gut.”

“Photographer David Liittschwager started with a question: How much life lies within a cubic foot? To get the answer, he brought a metal frame that size to Central Park, Costa Rica, a coral reef, and three other places around the world. Then he photographed what he found inside it. In the water beneath the Golden Gate Bridge in San Francisco, there were roughly 9,000 creatures. The 12-inch-by-12-inch A World in One Cubic Foot feels like an art book in the way it presents the plants and animals, one to a page in most cases, as objects of exquisite beauty.”

“A thrillingly beautiful, unique, wondrous evocation of life on earth—rich, abundant, largely unknown, but making our lives possible through the life activities of tens of millions of other organisms.  This book is for everyone, from the youngest children on up, who would like to begin to understand the complexity and beauty of familiar places.”

“That this is a beautiful book is immediately obvious. But it’s also remarkably smart—a conceptual device that will change the way you see the world around you. I was absorbed in every page.”

Bill McKibben, author of Eaarth: Making a Life on a Tough New Planet

"Here is a world of small wonders—an entire universe of biodiversity captured in the confines of a cubic foot. David Liittschwager is a magician of the lens who works at the intersection of art and science."

“In a series of masterful, intimate portraits, David Liittschwager turns animals and plants found in a single cubic foot of natural environment into objects of art, each more intricate and beautiful than the other. The richness of life documented here will astound you; the diversity of forms will leave you speechless.”

"A World in One Cubic Foot is confectionery for the eyes, each species a tasty morsel."