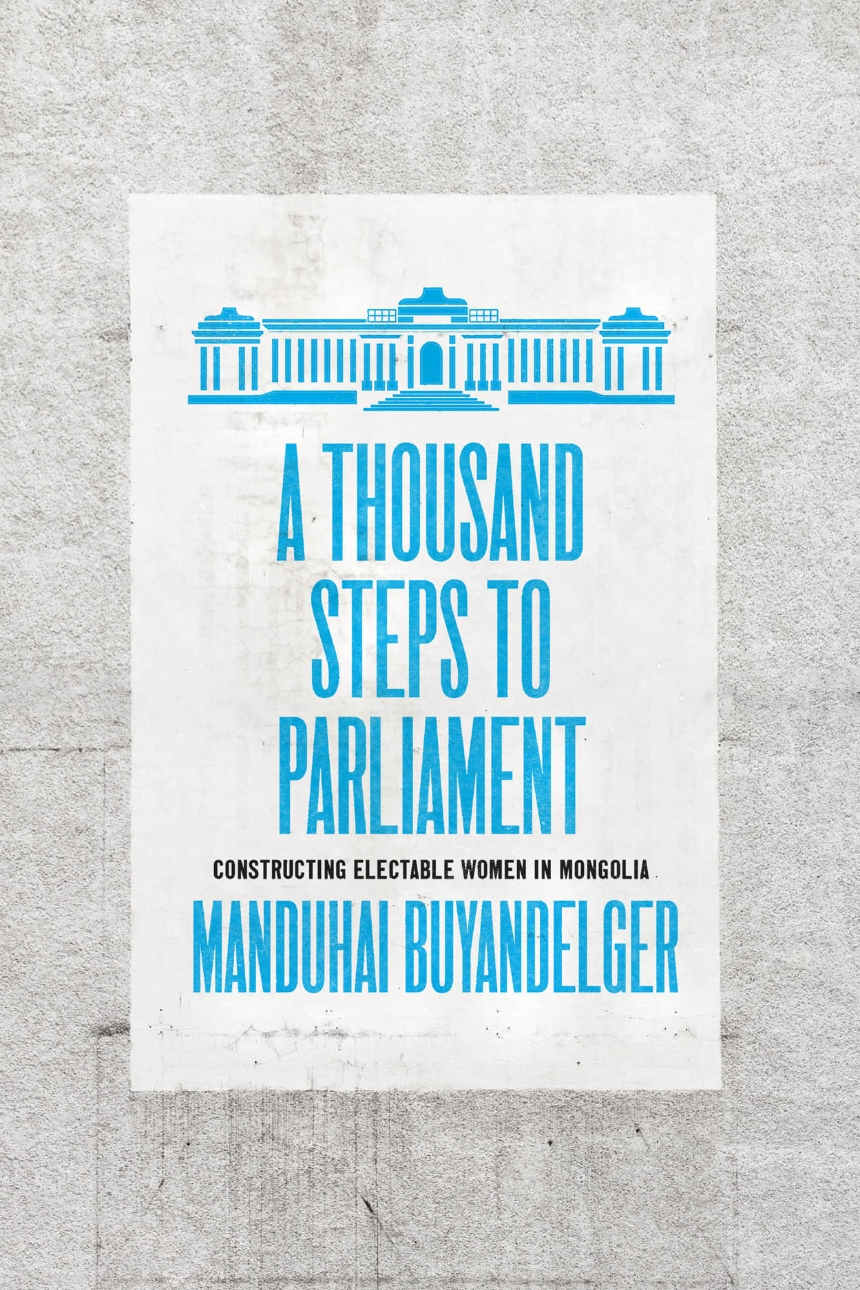 A Thousand Steps to Parliament

A Thousand Steps to Parliament

A Thousand Steps to Parliament traces how the complicated, contradictory paths to political representation that women in Mongolia must walk mirror those the world over.

Mongolia has often been deemed an “island of democracy,” commended for its rapid adoption of free democratic elections in the wake of totalitarian socialism. The democratizing era, however, brought alongside it a phenomenon that Manduhai Buyandelger terms “electionization”—a restructuring of elections from time-grounded events into a continuous neoliberal force that governs everyday life beyond the electoral period. In this way, electoral campaigns have come to substitute for the functions of governing, from social welfare to the private sector, requiring an accumulation of wealth and power beyond the reach of most women candidates. In A Thousand Steps to Parliament, Buyandelger shows how successful women candidates instead use strategies of self-polishing to cultivate charisma and a reputation for being oyunlag, or intellectful. This carefully crafted identity can be called the “electable self”: treating their bodies and minds as pliable and renewable, women candidates draw from the same practices of neoliberalism that have unsustainably commercialized elections. By tracing the complicated, contradictory paths to representation that women in Mongolia must walk, A Thousand Steps to Parliament holds a mirror up to democracies the world over, revealing an urgent need to grapple with the encroaching effects of neoliberalism in our global political systems.

“A Thousand Steps to Parliament is exemplary of political anthropology at its best. Using fine-grained ethnography, detailed historiography, and compelling prose, Buyandelger demonstrates the ways in which elections are so much more than technical exercises. The result is a wholly original and completely convincing analysis of electoral politics and the making of women’s electable selves. Buyandelger gifts us a set of concepts and methods for understanding postsocialist democracy that couldn't be more timely.”

“In her splendid book, Buyandelger covers a wide range of subjects that are altogether fresh and new in the context of the English-language literature on Mongolia. With clear, concise language, she conveys new information about the actual practice of politics in Mongolia while also illuminating the actuality of gender politics—hitherto little studied with such attention and nuance.”

Abbreviations and Acronyms
Note on Translation and Transliteration
Preface: Hillary Clinton in Mongolia
Introduction: Electable Selves—“Every Woman for Herself!”
Decision Events
A Thousand Steps
Electable Selves
Electionization
Feminisms and “Women in Politics”
On Research
Two Unique Elections
Chapter Outline
1. Legacies: Gender and Feminist Politics under State Socialism
Fluent in Public
Undisclosed Agents
Women in Presocialist Mongolia (pre-1921)
A Department of One’s Own (1924–32)
Restrategizing: From Propaganda to Workforce (1932–59)
The Power of Transnational Feminism (1959–70)
Women’s Well-being and Advancing in Leadership (1960s–1990)
Conclusion: The Power of Abstract Principles
2. Electionization: Governing and the New Economies of Democratization
The Euphoric Country
Short Histories of Electionization
Candidates: More Winners than Seats
Voters: Expect Actions, Not Promises
New Electoral Economies: Giggers and Election Experts
The Ones Who Do Not Care: Subjectivities and “Social Songs”
Power-holders and Campaign Promises
Conclusion: Governing the Political Time
3. SurFaces: Campaigns and the Interdependence of Gender and Politics
The (in)Substance of an Epoch
The Surreal Ecology of Campaign Media
The Magnitude: Why So Many?
Enfacement: Dull Images and Risk-Takers
Deep Surfaces
The Honest Gender
The Civic Defense
Expanding the Surface
Conclusion: Triangulation of Images
4. The Backstage: Inside (Pre)-Campaigning Strategies
A New Candidate: Beyond Gender
Made with Politics
Strategies and Tactics
Affective Strategies: Knowledge Work, Night Work, Drink Work
Architectural Strategies: The Fight to Get a Constituency
A Panoptic Practice: Building the Base and Capital
Resorting to Tactics: Internal Competition and Debasing
In Someone’s Territory: Watching Campaigning as Governing
Conclusion: Electionization as Force
5. Intellectful: Women against Commercialized Campaigns
The Silken Intellect
Pulling the Plug on Campaigning
The Charisma of the Oyunlag
An Intellectful Celebrity: Funding with a Novel
Campaigning with Symbolic Capital: The New Oyunlag in Politics
Social Circles versus Assemblages
Gatherers, Warmer-Uppers, and Movers
Financing: The Guide against Chaos
From Revealing the Fraud of 2008 to the 2012 Election
Conclusion: Oyunlag as a Disruptive Force
6. Self-Polishing: Styling the Candidate from Inside and Outside
A Makeover
The Benders of Neoliberalism
Super Secretaries and Parliamentary Candidates
Electability as a Shifting Target
Self-Polishing: Change Yourself, Change Your Home, and then Change Your Country
Self-Styling: Power Suits and Updated Deel
Zanaa and the Up-to-date Deel
Inner Cultivation: Care of a Candidate
Conclusion: Beauty as a Political Project
Conclusion: The Glass Ceiling as a Looking Glass
Acknowledgments
Notes
References
Index