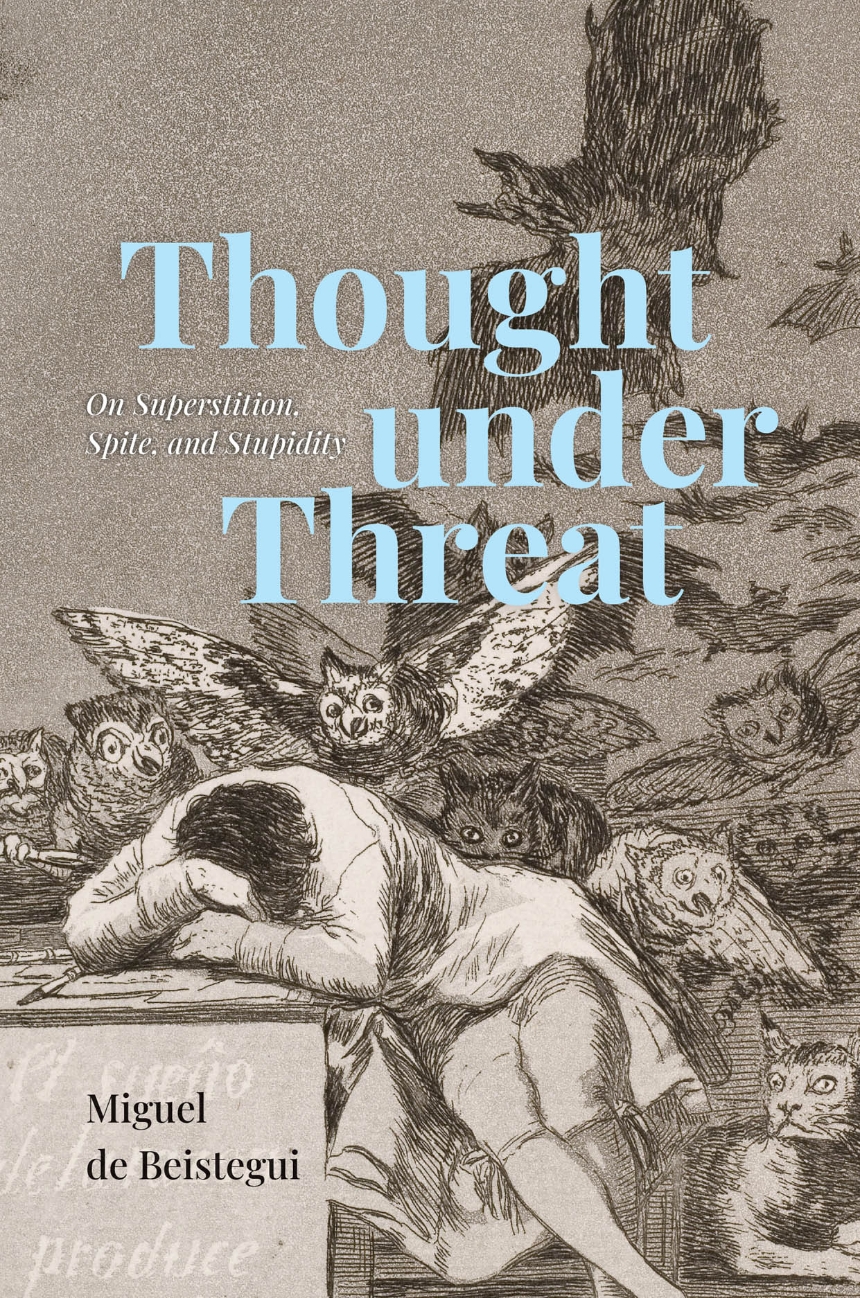 On Superstition, Spite, and Stupidity

On Superstition, Spite, and Stupidity

Thought under Threat reveals and combats the forces diminishing the power and role of critical thinking, whether in our individual lives or collectively.

Thought under Threat is an attempt to understand the tendencies that threaten thinking from within. These tendencies have always existed. But today they are on the rise and frequently encouraged, even in our democracies. People “disagree” with science and distrust experts. Political leaders appeal to the hearts and guts of “the people,” rather than their critical faculties. Stupidity has become a right, if not a badge of honor; superstition is on the rise; and spite is a major political force. Thinking is considered “elitist.”

To see those obstacles as vices of thought, Miguel de Beistegui argues, we need to understand stupidity not as a lack of intelligence or judgment, but as the tendency to raise false problems and trivial questions. Similarly, we need to see spite not as a moral vice, but as a poison that blurs and distorts our critical faculties. Finally, superstition is best described not as a set of false beliefs, but as a system that neutralizes one’s ability to think for oneself.

For de Beistegui, thinking is intrinsically democratic and a necessary condition for the exercise of freedom. Thought under Threat shows how a training of thought itself can be used to ward off those vices, lead to productive deliberation, and, ultimately, create a thinking community.

“This is a cri de coeur emphasising the importance of critical thinking, especially in the current climate of distrust of science and experts. Rather than offering a simple jeremiad against thoughtlessness and its implications, the author seeks to show how this trait can be overcome, and how democracy can ultimately be strengthened as a result.”

"A powerful critique of the current cultural abdication of the responsibilities that attend freedom of thought. He compellingly argues that the very fate of democracy requires everyone to get better at the virtues of thinking and cultivate generosity as a habit of mind. This book is exceptionally well written, accessible, and rigorous . . . Essential."

“Without a doubt, this is de Beistegui’s best work to date. Comprised of elegant writing and clear arguments, Thought under Threat is entertaining and enjoyable to read—until one remembers how disturbing its warnings are. This is a book for intellectuals by an intellectual, and I expect its readership will exceed the bounds of philosophy, comparative literature, and the humanities to find an audience even outside of academia.”

“Thought under Threat exemplifies what philosophy must become—historically literate, hermeneutically careful, and committed to addressing problems that have their roots in more than the most recent academic curiosity. De Beistegui’s argument is clear and convincing, and I highly recommend it to fellow scholars of philosophy.”