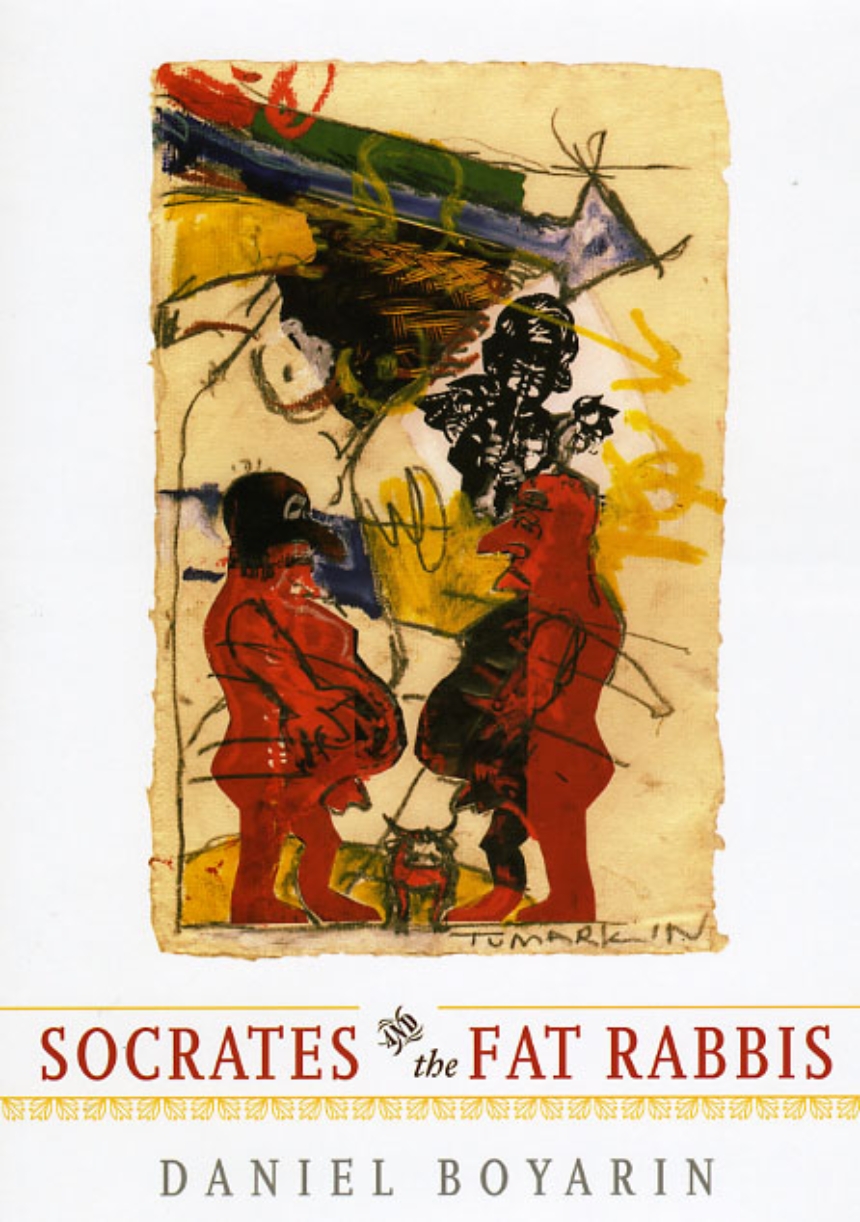 Socrates and the Fat Rabbis

Socrates and the Fat Rabbis

What kind of literature is the Talmud? To answer this question, Daniel Boyarin looks to an unlikely source: the dialogues of Plato. In these ancient texts he finds similarities, both in their combination of various genres and topics and in their dialogic structure. But Boyarin goes beyond these structural similarities, arguing also for a cultural relationship.
In Socrates and the Fat Rabbis, Boyarin suggests that both the Platonic and the talmudic dialogues are not dialogic at all. Using Michael Bakhtin’s notion of represented dialogue and real dialogism, Boyarin demonstrates, through multiple close readings, that the give-and-take in these texts is actually much closer to a monologue in spirit. At the same time, he shows that there is a dialogism in both texts on a deeper structural level between a voice of philosophical or religious dead seriousness and a voice from within that mocks that very high solemnity at the same time. Boyarin ultimately singles out Menippean satire as the most important genre through which to understand both the Talmud and Plato, emphasizing their seriocomic peculiarity.
An innovative advancement in rabbinic studies, as well as a bold and controversial new way of reading Plato, Socrates and the Fat Rabbis makes a major contribution to scholarship on thought and culture of the ancient Mediterranean.

“It is a brilliant and novel move to put the Talmud next to Lucian. Boyarin brings together here some very hot topics: cultural difference, cultural regulation, and the specific interface between Jewish and Greco-Roman culture. Socrates and the Fat Rabbis is a book with intellectual range and ambition. And it is fun—as the title promises.”

“Boyarin’s imaginative and erudite book stages a quite stunning encounter between Socrates, and the philosophical enterprise he represents, and the rabbinic tradition of Talmudic interpretation. Along the way, Boyarin finds a way of accounting for both the formation and limits of philosophical idealism, returning his reader time and again to the gap that separates ideal worlds from the matter of living. At stake is the meaning of both dialogue and dialectics, both of which assume an important rhetorical dimension. With irony, brilliance, and grace, Boyarin shows how the rhetorical dimensions of irony, comedy, fantastic figures, polyvocality, and omission are essential to understanding the kind of dialogue that remains critical and vigilant in relation to the commitment to truth. Over and against an idealism that would transcend the sensuous world, including errant bodies and wayward utterances, Boyarin insists on the necessity of that chasm that separates ideal truth from the truth of what we can and must live. This is a joyous, serious, and convincing book, one that not only brings the study of Plato (particularly in the double-voice of Socrates) into a necessary engagement with Talmudic interpretations, but reminds us again how important it is for rethinking the dialogic conditions of truth to pay close attention to what fails to conform to authoritative law, to the faltering effort to find one’s way, and to a critical project that requires new forms of becoming, and new ways of becoming slightly less serious, in order to move, with others, closer to what is true.”

“It is almost impossible to experience the Talmud from outside the talmudic academy. Inside the yeshiva world, a long, rigorous training is prescribed — an initiation so thorough that, at the end of it, familiarity breeds blindness to the Talmud’s extreme strangeness. It is Boyarin’s strength that he looks at the Talmud from both in-and outside. His work balances on the pin’s head where Western modes (from Plato through contemporary theory) and Judaic ones intersect. The result is in some ways as heteroglossic as the mixed genres that Boyarin unearths in both Platonic dialogues and talmudic dialectics. This book is in a way its own Mennipean satire, ‘including scenes in heaven, dialogue between the living and dead . . . and especially querying (almost self-mockery) of the value of the author’s own search for truth.’ The result is to tear open textual fabrics that have remained on the whole intact because they are closely watched and self-enclosed. Boyarin’s book addresses suspicions that many have had as to how dialogical Plato’s dialogues are, and it brings to view how astonishingly constructed the Talmud is in ways that have ‘not been considered until now . . . because Babylonian Jewish literature has hardly been considered in any contexts but its own.’”

Preface : The Cheese and the Sermons: Toward a Microhistory of Ideas

1          In Praise of Indecorous Acts of Discourse: An Essay by Way of Introduction

2          “Confound Laughter with Seriousness”: The Protagoras as Monological Dialogue

3          “Confound Seriousness with Laughter”: On Monological and Dialogical Reading—the Gorgias

4          Jesting Words and Dreadful Lessons: The Two Voices of the Babylonian Talmud

5          “Read Lucian!”: Menippean Satire and the Literary World of the Babylonian Talmud

Appendix: On the Postmodern Allegorical