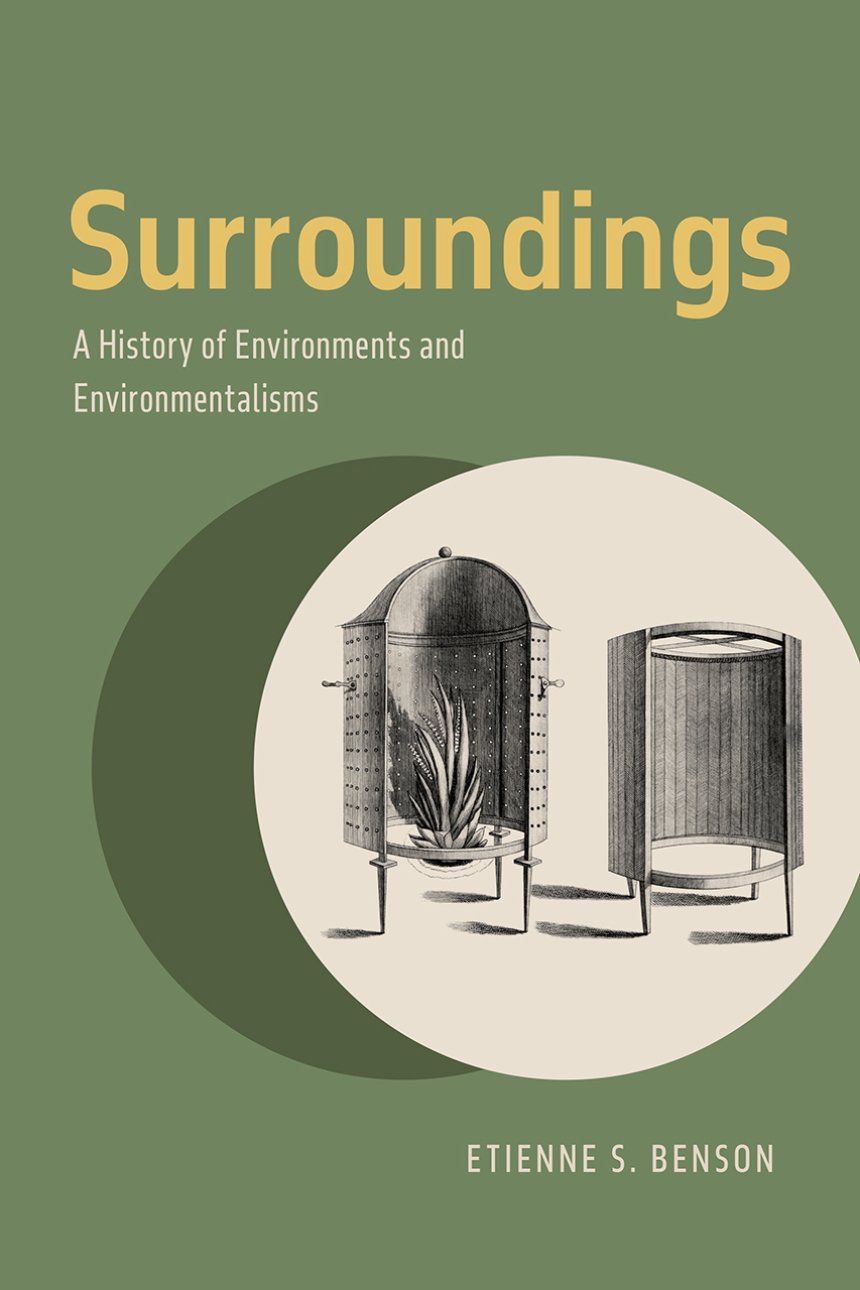 Given the ubiquity of environmental rhetoric in the modern world, it’s easy to think that the meaning of the terms environment and environmentalism are and always have been self-evident. But in Surroundings, we learn that the environmental past is much more complex than it seems at first glance. In this wide-ranging history of the concept, Etienne S. Benson uncovers the diversity of forms that environmentalism has taken over the last two centuries and opens our eyes to the promising new varieties of environmentalism that are emerging today.

Through a series of richly contextualized case studies, Benson shows us how and why particular groups of people—from naturalists in Napoleonic France in the 1790s to global climate change activists today—adopted the concept of environment and adapted it to their specific needs and challenges. Bold and deeply researched, Surroundings challenges much of what we think we know about what an environment is, why we should care about it, and how we can protect it.

"Surroundings weaves together a bold and ambitious history of the concept of environment. . . . The span of the book is not to be taken lightly; it requires the reader to synthesize alongside Benson. Each chapter is a dense episodic traverse that is well worth the journey for those in the fields of history, science and technology studies (STS), and environmental studies. . . . The episodes Benson selects form a kind of interlocking, nested, and diverse set of narratives—also reflected in the concluding chapter, with a series of much shorter present-day episodes. . . . It only serves to underscore Benson's elegant crafting and in-depth recognition of multiple environmentalisms that might serve as a cautionary diagnostic for a future where environmental crises require ethical and historically informed responses."

Isis: A Journal of the History of Science Society

"A must-read for anyone working or studying in science studies and with a keen interest in environmental ideas or knowledge."

"[A] tightly argued, learned and stimulating book. . . . The result is a wide-ranging argument about the histories of environments, one that is far more catholic than its predecessors and also more challenging about the worth of the concept. . . . Surroundings is fluidly written but also densely argued. While other genealogies could doubtless be drawn, it is fascinating and successful in showing not only that environment has been ‘enormously generative’ (p. 193) of ideas about the world we live in but also that those ideas have often occluded justice and equity arguments. . . . Benson's pluralism is compelling in its genealogy of modes of environmental thinking over the past two centuries."

"The book covers so much ground. . . . Benson’s case studies involve different kinds of scientific practice, the creation of new fields or disciplines, and use of new technologies and methods in science and medicine. Although he eschews deeper analysis of these changing conceptual frameworks, the book should make us think about how these concepts flow from the specific goals, methods, and orientation of a given field or discipline. The book is not so much about how the term environment has been understood or whether we should continue to use the term. It is about how disciplines shape thought. When new concepts are formed, they both include and exclude certain ideas, solutions, or possibilities. Understanding this process can help us think about how to break through those disciplinary barriers to arrive at solutions when problems become immensely complex."

Journal of the History of Biology

"A lively historical survey of the concept [of environment] in epidemiology, sociology and ecology."

"For over two hundred years, the idea of the environment has been the inspiration behind an assortment of scientific disciplines and political movements—and yet it has recently drawn sharp critiques from scholars and activists alike. Benson’s sharp-eyed and synthetic history makes a compelling argument for the enduring value of the concept, while simultaneously charting its shortcomings, as noted by generations of critics. Surroundings communicates the urgent need to reevaluate what we mean when we talk about the environment—and to do so in clear view of the concept’s checkered history. This is a provocative and accessible account, highly recommended for undergraduate and graduate classes in the environmental humanities."

Deborah R. Coen, author of Climate in Motion: Science, Empire, and the Problem of Scale

"In this timely and erudite book, Benson offers a fresh perspective on how the environment became such a central category in the modern world. Surroundings excavates the chasm between humans and the natural world that often underlies ‘environment,’ exposing the notion’s inadequacy as well as its fruitfulness. An indispensable text for students, scholars, activists, and anyone interested in the history—and future—of environmentalism."

"In Surroundings, science historian Etienne S. Benson explores with vivid precision just what people have talked about—and what they have been collecting, analyzing, consuming, and otherwise altering—when they talk about ‘environment.’ This deeply informed and thoughtfully argued book explores past uses of ‘environment’ to help us grapple with the current crisis. Its illuminating case studies travel from imperial naturalists, urban reformers, and resource managers to state toxicologists, Aerocene artists, and indigenous activists. Not just the study of a concept but of the concrete practices, investigations, and intentions that have put that concept to work, this wide-ranging, dynamic, and urgent study reveals ‘environment’ as a powerfully mutable term with a conflicted past and a tense present—and considerable potential for the future."

Introduction: What Was an Environment?

1 The World in the Museum: Natural History and the Invention of Organisms and Environments in Post-Revolutionary Paris
2 Environments of Empire: Disease, Race, and Statistics in the British Caribbean
3 The Urban Milieu: Evolutionary Theory and Social Reform in Progressive Chicago
4 The Biosphere as Battlefield: Strategic Materials and Systems Theories in a World at War
5 The Evolution of Risk: Toxicology, Consumption, and the US Environmental Movement
6 The Human Planet: Globalization, Climate Change, and the Future of Civilization on Earth
Conclusion: What Might the Environment Become?