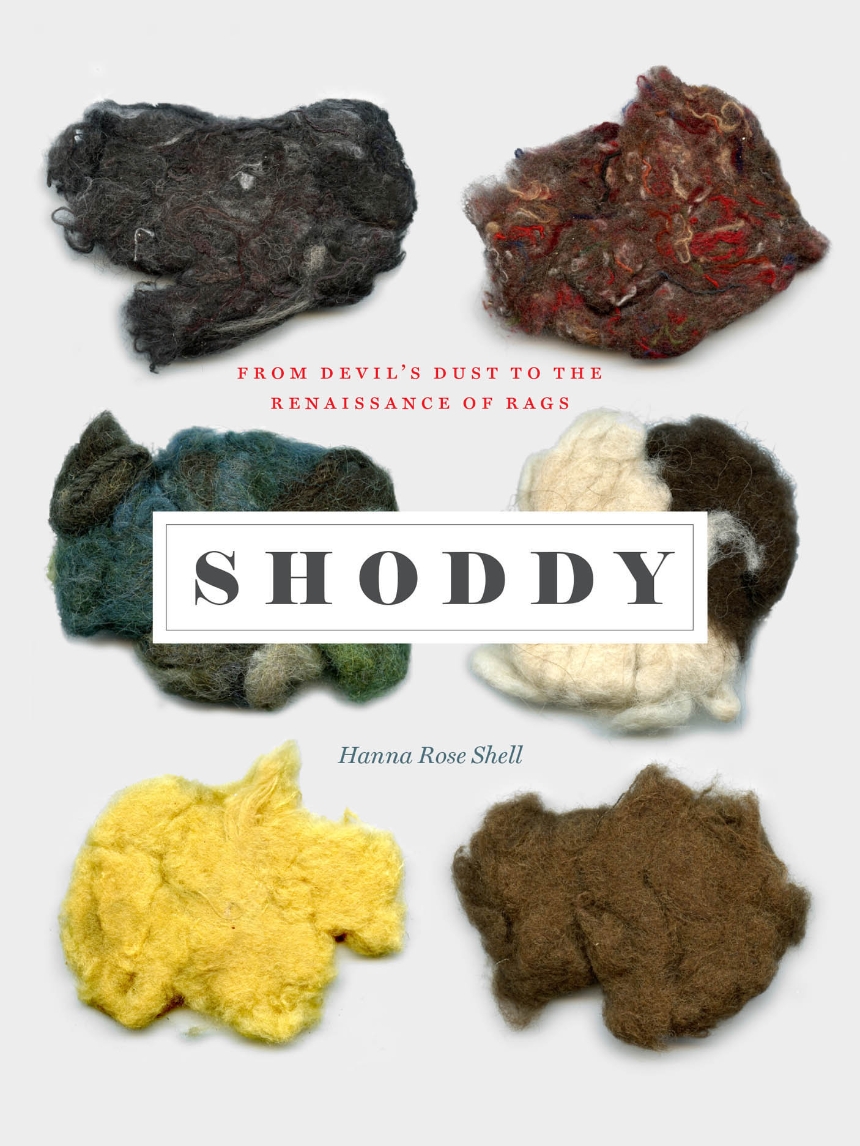 From Devil’s Dust to the Renaissance of Rags

From Devil’s Dust to the Renaissance of Rags

The history of modern-day old clothes recycling begins with a thing called shoddy. Starting in the early 1800s, shoddy was the name given to a new material made from reclaimed wool, and to one of the earliest forms of industrial recycling. Old rags and leftover fabric clippings were ground to bits by a machine known as “the devil” and then re-used. Usually undisclosed, shoddy–also known as reworked wool–became suit jackets, army blankets, mattress stuffing, and much more. Shoddy is the afterlife of rags. And Shoddy, the book, reveals hidden worlds of textile intrigue.

In Shoddy: From Devil’s Dust to the Renaissance of Rags, Hanna Rose Shell takes readers on a journey to discover shoddy, from Haiti to the “shoddy towns” of West Yorkshire in England, to the United States, back in time to the British cholera epidemics and the American Civil War, and into agricultural fields, textile labs, and rag-shredding factories. Shell’s narrative is both literary and historical, drawing on an extraordinary range of sources, from court cases to military uniforms, mattress labels to medical textbooks, political cartoons to high art. Shoddy moves between genres, bringing richly drawn characters and unexpected objects to life. Along the way, shoddy becomes equally an evocative object and a portal into another world.

Almost since the time it first appeared, shoddy was both ubiquitous and controversial. In part because it was often so hard to detect, it was inherently suspicious. Public health experts worried about sanitation and disease—how could old clothes be disinfected? As well, the idea of wearing someone else’s old clothes so close to your own skin was discomforting in and of itself. Could you sleep peacefully knowing that your mattress was very likely to be stuffed with dead soldiers’ overcoats? The use of the term “virgin” wool, the idea of virginity in relation to clothes, in fact emerged as an effort by the wool industry to counter shoddy’s appeal: to make shoddy seem shoddy. Over time, shoddy would capture a host of personal, ethical, commercial, and societal failings. And yet, there was always, within shoddy, the alluring concept of regeneration, of what we today think of as conscious clothing, eco-fashion, sustainable textiles.

Shell exposes an interwoven tale of industrial espionage, political infighting, scientific inquiry, ethnic prejudices, and war profiteering. Discarded clothes may make many journeys over the course of several lifetimes. Not only in your garments, but under your rug, in your mattress pads, piano blankets, in the peculiar confetti-like stuffing in your mailing envelopes, even in the insulation in your walls. Though it began with wool, over the past century the shredding “devil” has turned to synthetics from nylon stockings to Kevlar. Shoddy is likely connected to something you are wearing right now. After reading, you will never use the word shoddy or think about your clothes, the environment, sustainability, or the intermingled world around you the same way again.

“In a brilliantly quixotic, scholarly rich, fabulously illustrated trek,  Shell guides readers through the history of the reprocessing of used clothing and textiles, reflecting on human ornament, fears of contagion (think of the associations of ‘shoddy’ versus ‘virgin’ wool), and the evolution of a vast industry.”

“Shell has infused the history of shoddy–a cheap shredded material nowadays often used to fill mattresses–with a keen sense of drama. There are three ‘acts,’ rather than chapters, and a heavyweight cast of thinkers. Theoretical sophistication combines with narrative thrust in a remarkable story that moves from nineteenth-century England to today’s global ecological concerns around fast fashion.”

“The fascinating story of how a respectable textile product became synonymous with all things inferior. . . . [Shell] writes with an eye for both vivid visuals and historical links. . . . it’s a fun ride.”

"Situated on the side of a motorway that connects the cities of Liverpool and Hull in England is a giant pile of old dark rags, socks, and other decomposed fabrics. To some, the 20-foot-tall heap resembles a geological formation. To Hanna Rose Shell, a visiting professor of history at Caltech, the heap is a thing of beauty. Not only for the occasional rhinestones and buttons scattered among the debris but because the contents of the heap, known as shoddy, are a perfect metaphor for the concept of rebirth in society and history. . . . Shell's new book about shoddy covers the history and cultural influences of the recycled material across the globe, from Haiti to the U.S. to the 'shoddy towns' of England."

“Shoddy is that rare book that takes you from the direct experiences you share with the author (what to do with your used clothes? the feeling of ‘doing good’ when you donate them to clothe someone ‘less fortunate’) to the larger social, economic, historical, and, yes, moral universe in which those experiences live. Shell takes us on this kind of journey by searching for shoddy. Through her, we learn about the human costs of the Industrial Revolution, British Chartism, the economic realities of the American Civil War, the ideas that animated dissent—of Carlyle, Disraeli, and Marx, just for a start—and so much more, all through the eyes of shoddy. It is an exemplary book in its use of the visual record to weave a narrative that implicates current practice, not just in how we do scholarship across a range of fields in media and science and technology studies, but how we think about ourselves. Shoddy is a book that will change your mind.”

Sherry Turkle, author of Reclaiming Conversation: The Power of Talk in a Digital Age

“As textile consumption exploded in the nineteenth century, discarded cloth gained a second life; it provided the raw material for 'shoddy' fabrics that would enter the homes of enslaved workers, attire Civil War soldiers, and provide material for blankets and mattress fillings. Shell’s fast-paced meditation on the economic, cultural, and ideological histories of shoddy takes you around the world and into some of the most profound questions about capitalism—from its endless capacity for innovation to its unending appetite for ever more resources. Shoddy: From Devil's Dust to the Renaissance of Rags extends the history of the empire of fibers into the most surprising corners of our history and our modern life.”

Sven Beckert, author of Empire of Cotton: A Global History

“This fascinating book, laden with historical insights, takes us on a journey from the nineteenth-century origins of shoddy, made from reclaimed wool in the industrial heart of Yorkshire, to the wider world via contexts of politics, war, contagion, and death. Enlightened by the words of contemporary writers and thinkers and by photographic records, the author explores the many dimensions of a textile that became functionally essential for the likes of army uniforms, blankets, and shrouds. Shoddy offers a timely case study for the possibilities of material recovery and of the critical role of textiles to the human experience; it will appeal to historians, textile experts, and general readers, including those with interest in sustainability and recycling.”

Hazel Clark, author of The Fabric of Cultures: Fashion, Identity, and Globalization

"What makes Shoddy so remarkable is the author’s ambivalence about her subject, her acknowledgment of the mills’ odor and squalor together with her appreciation of the communities (and the rhubarb farms) the industry nourished. She discovers a romantic side of what others might dismiss as malodorous heaps of waste: the exotic weeds that flourished from seeds that traveled across the oceans with their moldering cargo to take root on British soil."

"Shoddy is a sophisticated history that attends to the rich network of interrelation that is inherent in even the most familiar of our things. Shell writes that ‘shoddy’s constantly shifting manifestation in space, time, and states of decomposition and recomposition binds nature and artifact, found and forged, wasted and wanted, in the unseen bits and inscrutabilities at the core of objects of our everyday existence.’ Shell gets at the heart of everyday life’s essential material strangeness, and the intimate relation one has with the ghosts from which it is composed — break it all down far enough, and everything is dust, everything is molecule, surrounded by its wandering threads."

Prologue: Finding Shoddy
Old Clothes Odyssey
The Heap
Act I: Devil’s Dust
Emergence of an Industry
Narratives of Transmutation, Myths of Invention
Devil’s Dust Politics
Material Philosophy and the Shredded Self
Shoddy as Paradox and Marx’s “Excrements of Consumption”
Act II: Textile Skin
The Wear of War
Textile Skin and “the Sinews of War”
Shoddy and the Body Politic
Photography and the “Harvest of Death”
On Shrouds and Shoddy
Act III: Lively Things
Miasma and Contagion
Consolidation of Clothes and Corpses
Disinfection and Its Discontents
The Intimate Materiality of the Unknowable
Liveliness and Formlessness
Epilogue: Shoddy Renaissance